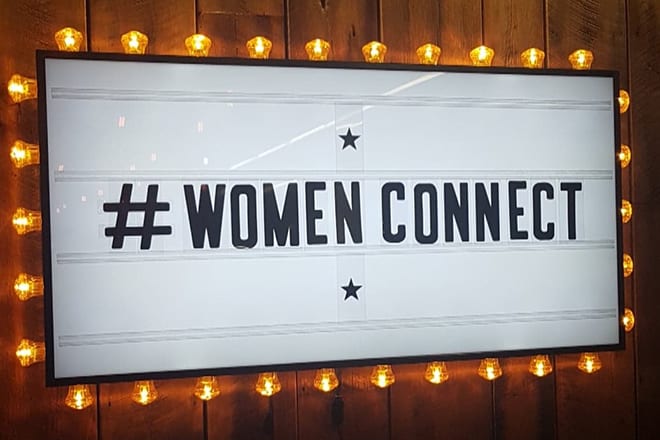 Posted at 18:17h in All Articles, Events by Deepa Patel

In light of International Women’s Day, a very special event took place at the Ticketmaster International HQ in London. Acoustic Live partnered with Sony Music’s ‘What If’ program to host ‘Women Connect’: a fun, inspirational and free event, helping to increase the accessibility of resources and creating equal opportunities for women in the creative industry.

The event was electric, to say the least. The room was buzzing with women of different ages, races and backgrounds, all united by their passion for music and creativity. Alongside the constant flow of drinks, everyones’ female artists were being played in the background and cards with thought-provoking questions were placed around the room.

‘Women Connect’ hosted five incredible speakers, each of whom had their own story to tell about their journey to the position they are in today, and their own words of wisdom for attendees of the event. This event was definitely much needed and hopefully we’ll see many more of them in the near future. Find out more about Acoustic Live’s work here. 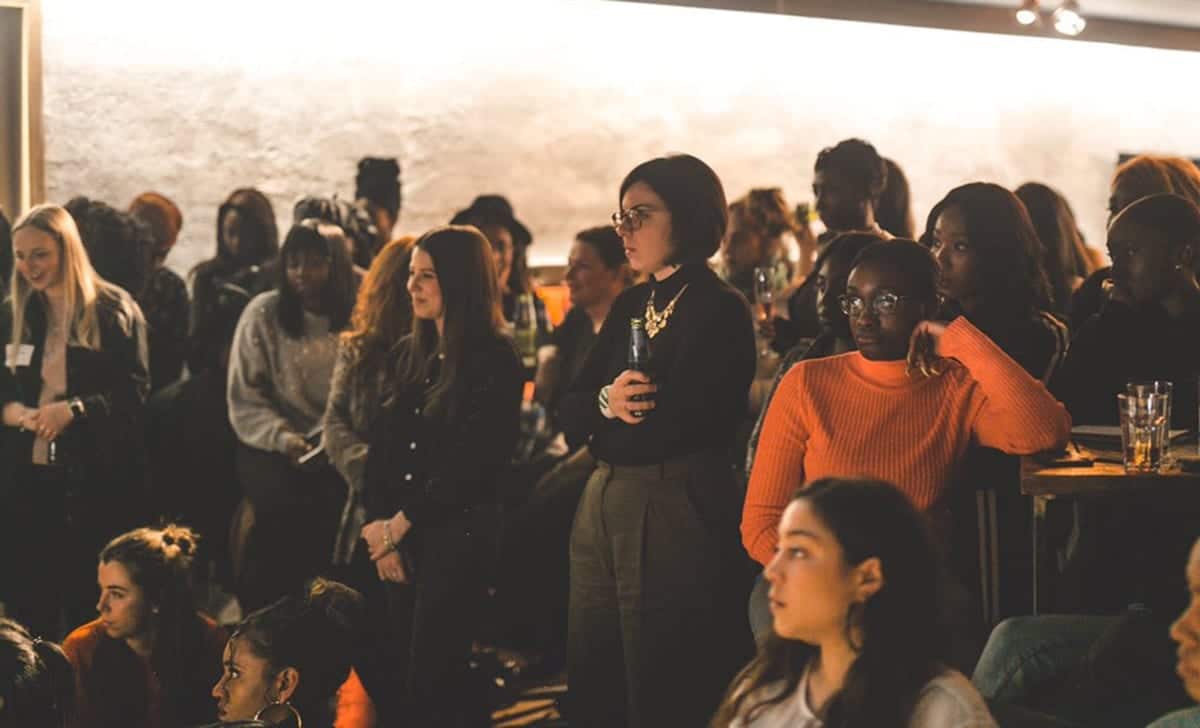 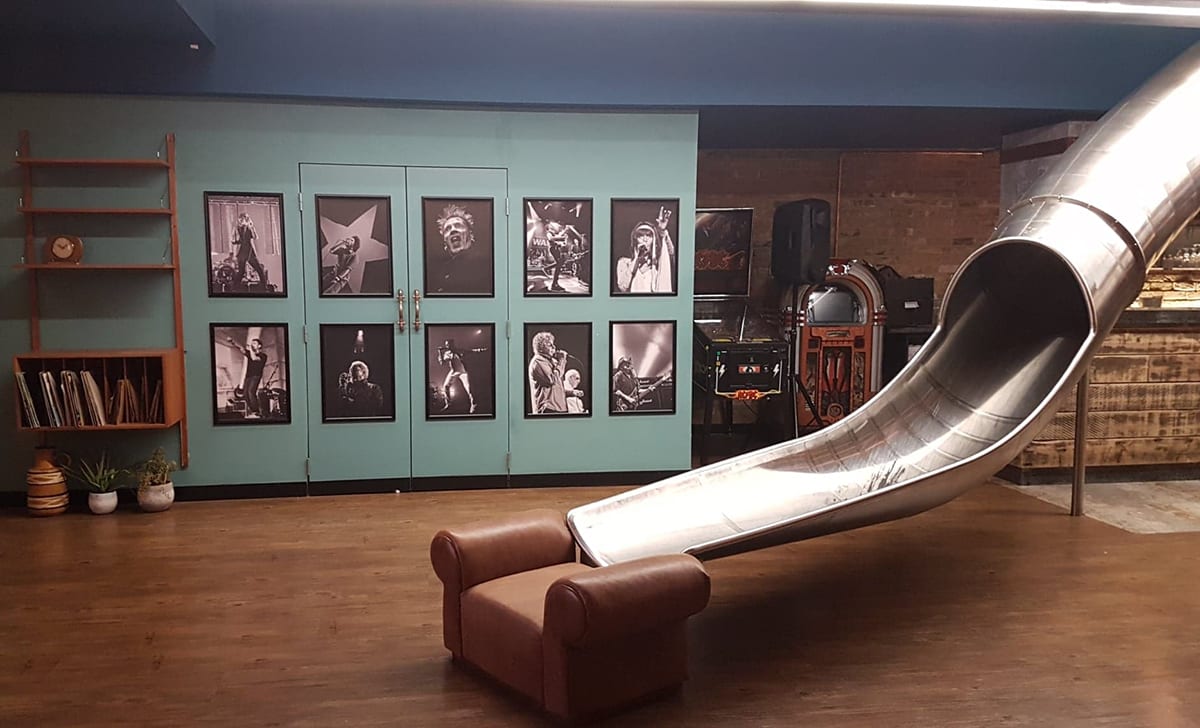 San began by describing her climb to Kilimanjaro; after completing a Business & Finance (specialising in Music & Entertainment Management) degree at university, she became an A&R assistant at Warner Music and went on to work at a number of agencies and events and entertainment companies before joining Kilimanjaro Live over five years ago.

San’s advice to an attendee who asked how to get regain passion for your work was to remind yourself of what you love – for example, if you love live music, go to live gigs and remind yourself of why and how much you love live music! She also emphasised the importance of maintaining a balance between your work and everything else – make sure you take time out for other things in your life, such as having a hobby.

San stated how important it is to love music when you listen to it, instead of simply analysing it. Nowadays, it can be so easy to automatically pick apart a song to try and find a deeper meaning in it – but sometimes we just need to sit back and enjoy it at face value. 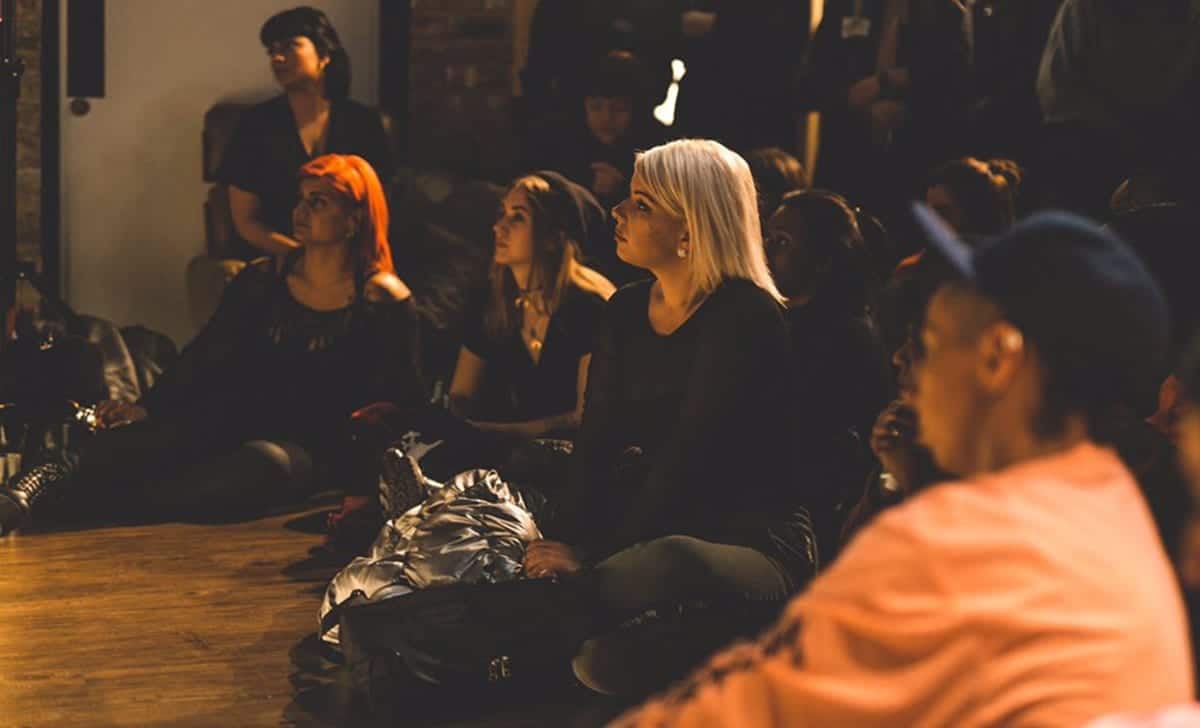 Claire took up a job as a receptionist at Profile Records at 16, before moving to a number of record labels (including BMG and Columbia) and later starting her own marketing consultancy company. After working for Coda, a live booking agency, for over four years, Claire is now qualifying to be an executive coach.

Claire highlighted the significance of seeing everything as a learning experience – there is always something positive to take out of a negative situation. She addressed the topic of ‘imposter syndrome’, which is when you believe that you don’t deserve to be in the position you are in and you fear being exposed. She said she deals with this by reflecting on what she has done and reminding herself of her achievements to reassure herself that she deserves to be where she is with her career.

When asked how she dealt with being a mother when in the music industry, she said that it required finding a balance between work and motherhood and finding a company that respects and understands your needs (which for her, was BMG).

Parris’ journey began when she did a PR internship at the age of 18, before starting her own digital PR company with a friend who was an aspiring artist at the time. When her friend was signed to Sony Music, this allowed Parris to learn more about the ins and outs of a record label, also resulting in her completing an internship at Sony. Now Parris is part of the Senior Management at RCA, and she even won a Woman in Music award last year.

Parris stated that she overcame gender and racial bias by owning her space and unapologetically working on what she is passionate and knowledgeable about, which is black British music. She has worked with the likes of MoStack and Avelino before they were signed and helped to make genres that were previously niche, the norm.

Parris’ advice that she’d give to her younger self was for her to always trust her gut instinct and to hold her purpose tight. 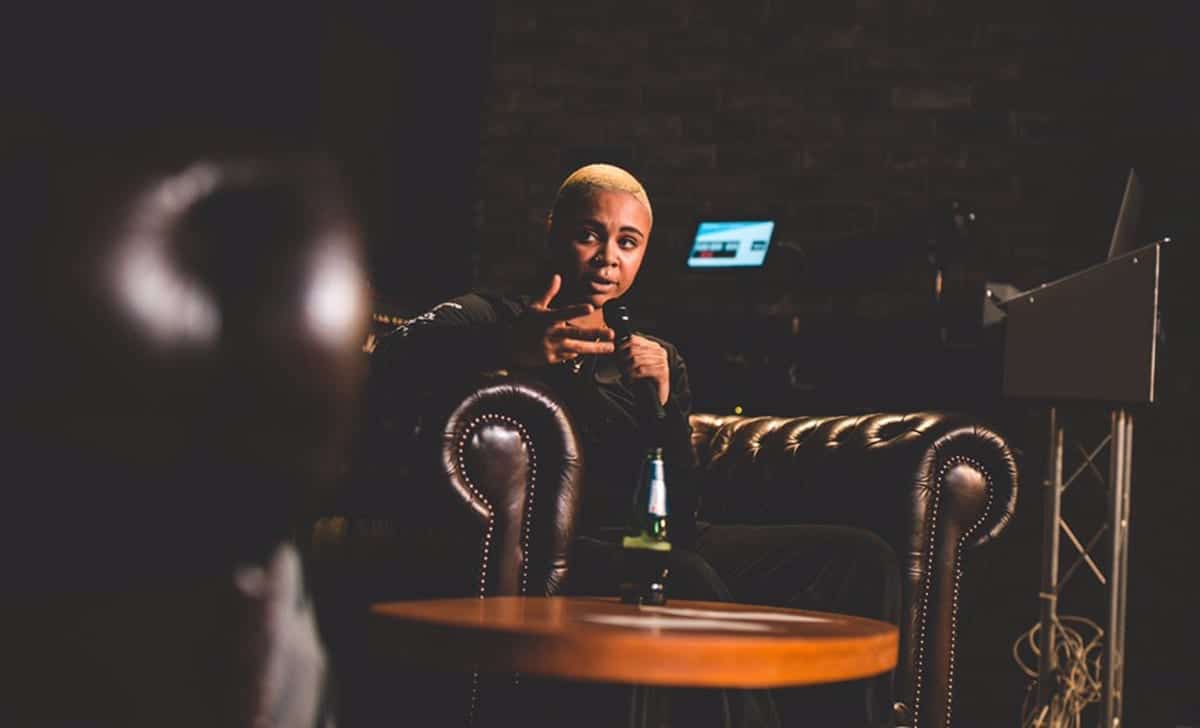 After graduating from university and not having much of an idea about what she wanted to do, Natty was approached by Galdem Magazine and was asked to write for them due to her passion for music and culture and her distinctive writing style. Since then, she has written for platforms such as Crack Magazine, Dazed and The Guardian, as well as being a radio host on Foundation FM and Reprezent Radio and a speaker at events at the Southbank Centre and The National Gallery etc.

On top of this, she now works at Columbia. How does she balance all of this, you may ask? It sounds more simple than it actually is, but she puts it all down to discipline.

Natty advised attendees to stop trying to be people pleasers, as it’s something that you can’t be in the creative industry if you want to take care of your mental health. She assured attendees that it’s ok to let people down and say no for the benefit of your own wellbeing.

Natty spoke about how important it is to work with people that are on your level and not always people above you – for example, collaborating with fellow aspiring artists or promoting the work of other people in the creative industry.

She also stressed that it is essential to put yourself out there with your work, which is valuable advice for any industry. She stated that you should ‘act as if no one’s watching you until they are’, meaning you should always try your best, regardless of whether anyone is acknowledging your work yet. 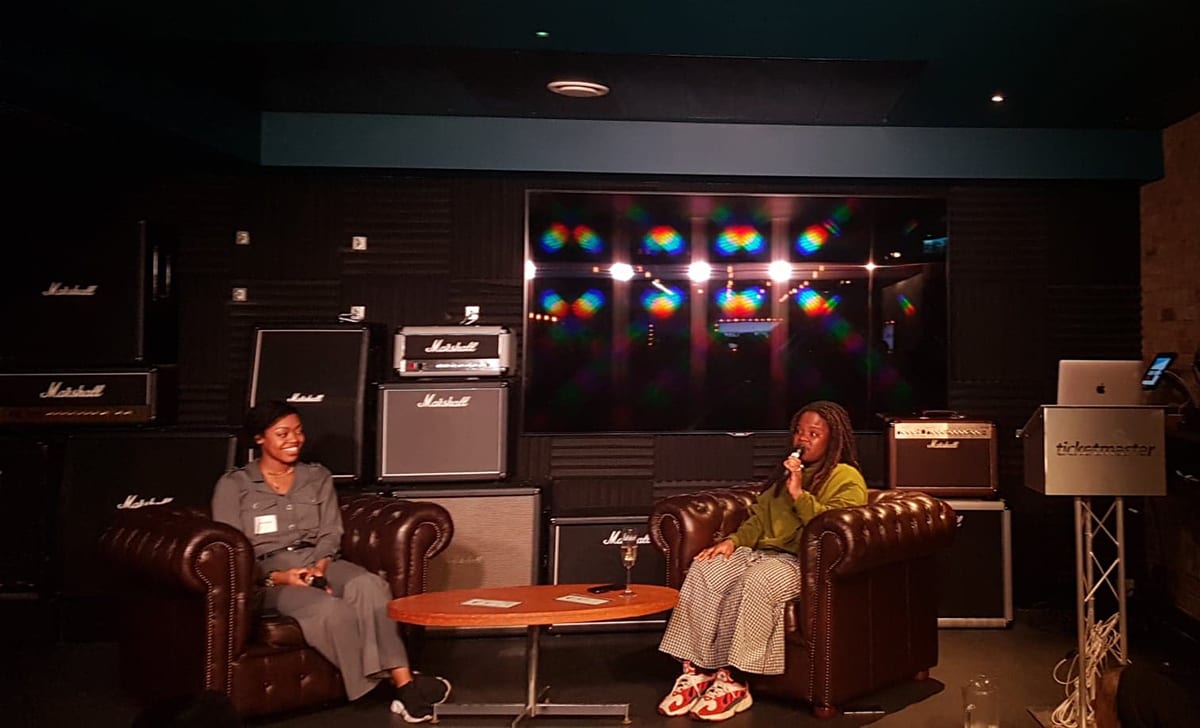 Sabrina began her journey into music by completing a Music degree at university, after which she became a Marketing Assistant at Warner Music. Now a Marketing Manager at RCA, her talk discussed moving to London from a small town and the huge impact that it had on her career.

Sabrina emphasised the importance of constantly challenging yourself and pushing yourself outside of your comfort zone in order to grow as an individual.

When asked how to know what’s worth your energy (i.e. what work is worth doing for free and what’s not), Sabrina stated simply, ‘You’ll realise and feel it when you’re taking it too far’. She also stated that you should not be afraid to ask employers for what you believe you are worth.

Sabrina ended the evening by leaving attendees with a powerful lesson: to love and accept yourself, even when you fail. ‘You have to get it wrong to get it right.’ Having a job in the creative industry isn’t something that involves saving lives, in the way that a job in the medical field, for example, may involve. The creative industry is one that affects people’s emotions, so the most important thing is to have fun with it, be passionate and be a fan. 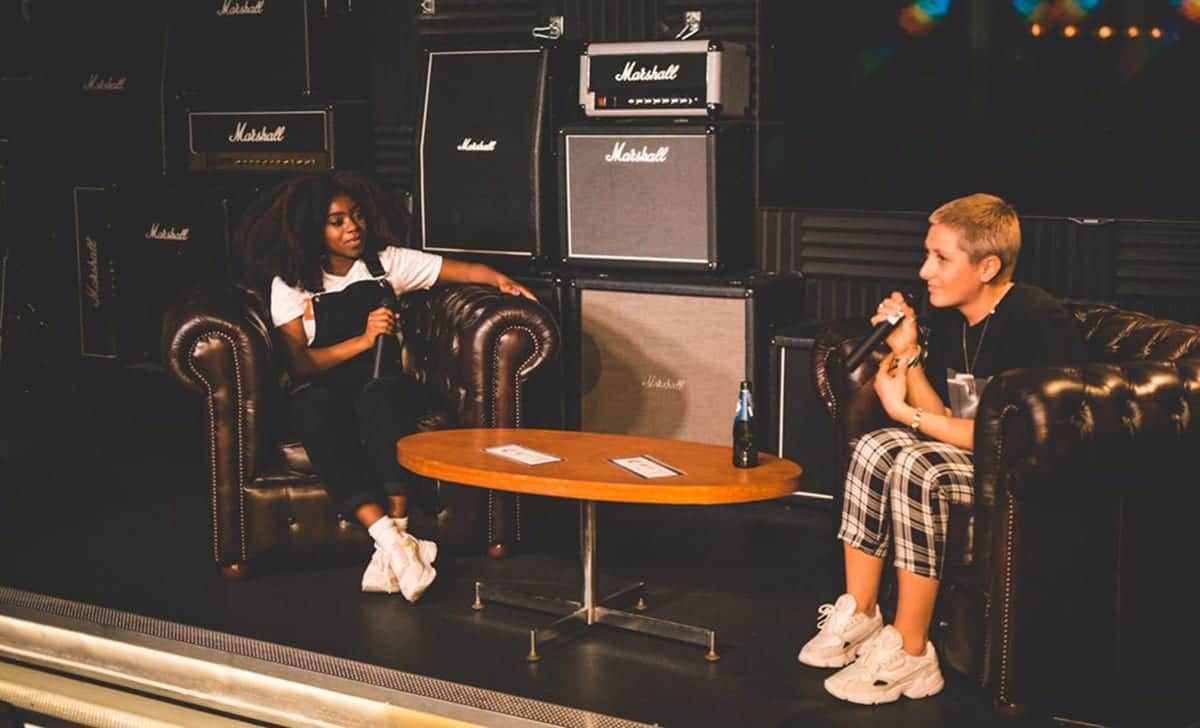