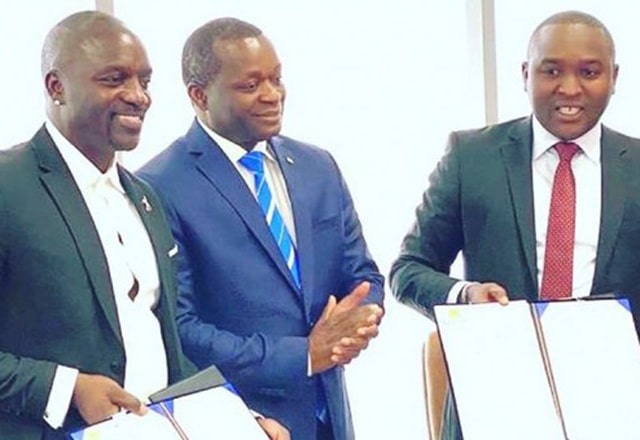 14 Jan Akon City: Akon agrees deal to create his own city in Senegal with its own cryptocurrency and airport

Posted at 20:15h in All Articles, News, News Main by Plugsville

Akon City -- Akon has been given the go-ahead to officially create his own city in his home country of Senegal.

Plans for ‘Akon City’ first surfaced in 2018, when the hip hop icon originally labelled the new territory ‘Akon Crypto City’, stating that he wants the new city to exclusively trade in his own digital cash currency -- ‘AKoin’. The city will be built on 2000 acres of land gifted to Akon by Senegal president Macky Sall.

The Grammy-nominated hip hop star tweeted a picture along with the following message to announce his progress: “Just finalized the agreement for AKON CITY in Senegal. Looking forward to hosting you there in the future”.

Just finalized the agreement for AKON CITY in Senegal. Looking forward to hosting you there in the future pic.twitter.com/dsoYpmjnpf

How long will Akon City take to build?

In an interview with Nick Cannon, he revealed more details about the city and stated that it should take around 10 years to be built: “It’s all renewable, the Akon-tainment solar city. It’s all renewable. A real physical place, it’s going to have a real airport. It’s a 10-year building block so we’re doing it in stages. We started construction in March and stage two is going to be 2025.”

During the interview, Nick Cannon suggested that only a billionaire could build an entire city from scratch. Akon neither confirmed or denied his personal wealth but did say this: “I always felt like if you have to label yourself a billionaire, I don’t even think billionaires label themselves billionaires. Because you have no idea [how much you’re worth].

Akon On Traveling To South Africa: “Only White People Have To Take Shots”

The new city is expected to be within five minutes drive of a new airport and a short drive from the capital city of Dakar. The companies website provided more details on the project:

“This mixed use, master-planned city, contains everything from residential to retail, parks, stadium, light manufacturing, universities, and schools. Akon Crypto City has opportunities for brands, businesses and high-profile individuals to create amazing, inclusive experiences in a futuristic environment and welcomes anyone looking to step into the future.”

Akon also launched ‘Akon Lights Africa’ in 2014, which will presumably tie in with his new city, after he estimated that the initiative had already reached 100,000 households and provided 13,000 street lights across Africa across 14 different countries.

On his official website, Akon’s team provided an explanation for why he is so passionate about his new city adopting a new form of currency:

“The African continent has 15% of the world’s population. It is the most valuable region in the world in terms of under and aboveground resources. It has 8% of world’s natural gas reserves: 45 countries on the continent have oil reserves. It has 57% of the world’s cobalt, 47% of its diamonds, 49% of its manganese, 31% of its phosphate and 21% of its gold. Moreover, the continent has a tremendous potential for hydroelectric power, solar energy and geothermal energy.

“By this reckoning, the African continent should be the realm of the richest countries and people. However, the truth is the exact opposite. Africa is the least developed continent in the world, having 34 of the 49 poorest countries. More than 40% of its population live on less than one dollar a day. Furthermore, Africa suffers from civil wars and terrorism.” Akon hopes that AKoin can become the common currency in not just Akon City but also wider Africa.

Akon and Akoin The Interview

Referring back to his chat with Nick Cannon, Akon’s wants AKoin to become the default currency across the entire continent: “You might just go to [Africa] for vacation and when you transfer American dollars into they money, you might be transferring it into AKoins. That’s the goal.”

Akon also argues that cryptocurrency allows Africans to become less dependent on their governments: “I think that blockchain and crypto could be the saviour for Africa in many ways because it brings the power back to the people… Cryptocurrency and blockchain technology offer a more secure currency that enables people in Africa to advance themselves independent of the government.”

Back in 2013, Akon spoke boldly about his plans to raise the economic fortunes of his home continent and why projects like ‘Akon City’ and ‘Akon Lighting Africa’ are so important to him: “I really want to make the biggest impact in Africa for sure,” Akon said during a 2013 interview with CNN. “If I could have my way, Africa would be the United States of Africa.”