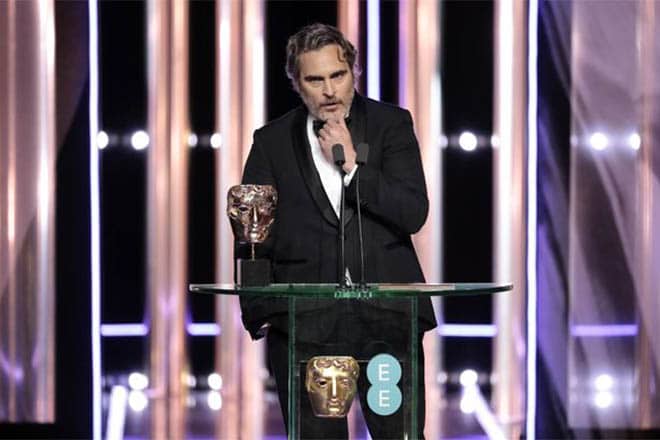 Posted at 23:32h in All Articles, News, News Main by Plugsville

Phoenix, who starred in Joker, one of the 2019’s most popular films both sales-wise and culturally, used his acceptance speech to discuss the lack of representation across the nominee’s list. All 20 nominees were white while no women were nominated in the Best Director category for the seventh year in a row.

Despite stating Joaquin Phoenix that he was grateful to receive the BAFTA honour, here’s what he had to say: “I also feel conflicted – we send a very clear message to people of colour that ‘you’re not welcome here. I don’t think anybody wants a handout or preferential treatment. People just want to be acknowledged and appreciated and respected for their work.

“I’m ashamed to say that I’m part of the problem because I’ve not ensured that the sets I’ve worked on are inclusive. We really have to do the hard work to truly understand systemic racism. I think that it is the obligation of the people who have created and perpetuated and benefited from a system of oppression to dismantle it… so that’s on us.”

The BBC report that a person who ‘self-identifies as a BAFTA judge immersed in diversity issues’ admitted that only he only watches around a quarter of the 269 films which are put forward to him for consideration each year. Watching 269 films would take the equivalent of 65 working days (538 hours). This person also revealed that Queen & Slim, which was eligible for consideration, is ‘still sitting on his desk unseen’.

Here is his acceptance speech 🙏

Here is the full list of winners from the 2020 BAFTA awards:

Once Upon a Time… In Hollywood

Sorry We Missed You

Leonardo DiCaprio – Once Upon a Time… In Hollywood

Margot Robbie – Once Upon a Time… In Hollywood

WINNER: Brad Pitt – Once Upon a Time In Hollywood

Tom Hanks – A Beautiful Day in the Neighborhood

Quentin Tarantino – Once Upon A Time… In Hollywood

EE Rising Star Award (voted for by the public)

Outstanding debut by a British writer, director or producer

Film not in the English language

Portrait of a Lady On Fire

A Shaun the Sheep Movie: Farmageddon

Once Upon a Time… In Hollywood – Quentin Tarantino

Once Upon A Time… In Hollywood – Arianne Phillips

Once Upon A Time… In Hollywood – Fred Raskin

Once upon a Time… In Hollywood – Barbara Ling, Nancy Haigh

Once Upon A Time… In Hollywood – Victoria Thomas

WINNER: Learning to Skateboard in a Warzone (If You’re a Girl)

WINNER: Grandad Was A Romantic