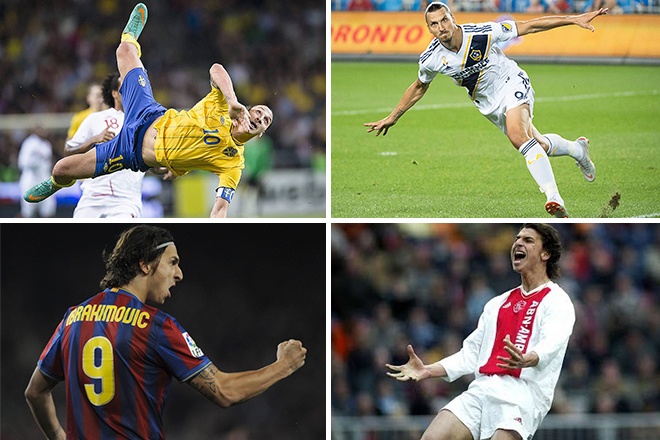 Posted at 16:58h in All Articles, News by Ajay Rose

Only three active players have scored 500 or more goals.

One is Cristiano Ronaldo. Another is Lionel Messi, who like his now-Juventus-based nemesis, has scored over 600 in his career. The third, is Zlatan Ibrahimovic, following a exquisite acrobatic flick in the 43rd minute against Toronto FC on Sunday 16 September 2018. LA Galaxy described the goal best: ‘ARE YOU SERIOUS? #Zlatan500 in the most Zlatan way possible.’

ARE YOU SERIOUS? #Zlatan500 in the most Zlatan way possible. pic.twitter.com/CSvyF9vszv

Now plying his trade in America, Zlatan has scored 438 goals in 747 appearances at club level for Malmo FF, Ajax, Juventus, Inter Milan, Barcelona, AC Milan, PSG, Manchester United and LA Galaxy. Since moving to the California-based MLS side in March 2018, Ibrahimovic has scored 17 goals in 18 appearances. The iconic Swede has also scored 62 goals in 114 appearances for his country.

As well as scoring goals for fun, Zlatan has also won trophies wherever he’s gone, 33 of them to be precise, winning a trophy in every year of his career since 2001. Across the years, Ibrahimovic has provided an endless supply of worldies, so Plugsville Sport have rounded up 10 of the best Zlatan goals.

Zlatan announced his arrival in the Champions League with a double on his debut, including this stunner against Lyon. Looking back, it seemed inevitable he would lift Europe’s elite prize at some point during his illustrious career, but those hopes appear to have all-but died now.

Zlatan has always had a penchant for long-range volleys and this was one of his earlier trademarks, a screamer in the Champions League, one which continued to interest Europe’s biggest clubs.

Zlatan beat five defenders, including three defenders twice, before slotting home with ease. The club’s YouTube account describe it as his finest strike for Ajax. Hard to argue with that claim.

Euro 2004 marked the arrival of players that would go onto dominate the world of football for the next decade. Wayne Rooney and Cristiano Ronaldo are among them, but this insane flick against Italy helped a young Swedish striker further establish himself among Europe’s best.

There are few better sights in football than a rocket of a free-kick smacking the underside of the bar before bouncing straight in. You tried to think of one, but you couldn’t. So here is Zlatan’s absolute thunderbolt ricocheting in off the bar.

Zlatan transfer to Barcelona from Inter Milan cost round about €70m. The Catalonian outfit spared no expense to bring him to the Camp Nou. Within seven games, he was already the top scorer in La Liga, scoring seven times, including this thunderbolt against Real Zaragoza. His stay in Spain didn’t last as long as he would’ve liked, as he explains in his autobiography, I Am Zlatan: “‘It started well but then Messi started to talk. He wanted to play in the middle, not on the wing, so the system changed from 4–3–3 to 4–5–1. I was sacrificed and no longer had the freedom on the pitch I need to succeed”.

For the most part, friendlies are meaningless, but when an opposing striker arrives on your home turf and scores four, it raises cause for concern. Stan Collymore described it as ‘the most insane goal he has ever seen on a football pitch’.

There was nothing at stake in this group stage dead rubber, as Sweden were already eliminated and France had already qualified. But that didn’t stop Ibrahimovic from leaving his mark on the tournament with a memorable bicycle kick. Perhaps the best Zlatan goal of the lot; a world-beating strike on the biggest stage.

What a time to get your first goal for your new club. On your debut against one of your new fiercest rivals.

Zlatan is 36-year-old, but somehow, managed to adjust his body in-time to acrobatically flick it past a hapless Alex Bono in goal. This was also the 500th striker of his career and 17th goal in 18 games. Zlatan doesn’t fear retirement. Retirement fears Zlatan.