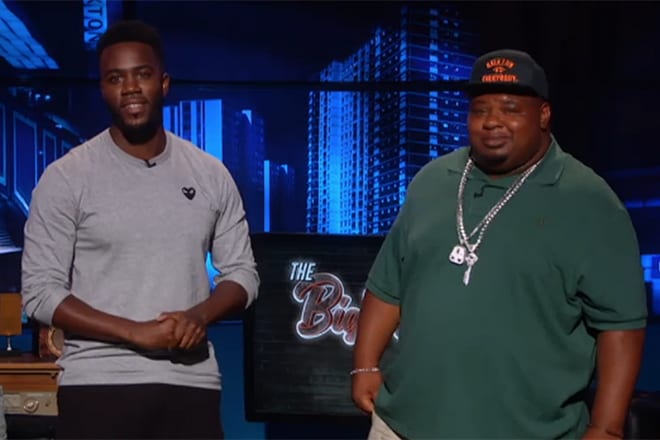 Posted at 01:01h in All Articles, News by Ajay Rose

The first season of ‘The Big Narstie Show’ ran for six episodes. Jonathan Ross was one of the guests during the finale, a man who has presented over 350 episodes of his own late night talk show between ‘Friday Nights With Jonathan Ross’ and ‘The Jonathan Ross Show’, dating back to 2002.

It’s safe to say that ‘Wossy’ is now a mainstay on British television. ‘The Big Narstie Show’, although very young, displayed a blend of genuinely hilarious comedy and relevant questioning, one that wouldn’t look out of place should it one day reach the weekly heights of the biggest British talk shows.

Presented by Big Narstie and Mo Gilligan, better known as Mo The Comedian, ‘The Big Narstie Show’ was undoubtedly a risk, at least on paper.

The online world will be hugely familiar with both hosts, but television is far more competitive. Watching something on TV is a bigger commitment than being able to open YouTube on your phone at any time.

‘The Big Narstie Show’ was genuinely hilarious, and as such, it grew into what you might describe as ‘must-watch’ television across its six episodes. By ‘must watch’, I mean, the show is good enough for you to make damn sure that you watch it before the next episode is released. Some shows you’re happy to watch weeks or even months later. This isn’t one of them.

The duo’s unfiltered sense of comedy bears the reflection of two friends cracking jokes in their living room. Mo co-hosts the show as if he’s ten years deep into a television career. He doesn’t shy away from making jokes that might be considered awkward in another arena.

The stand-up comedian leans on his subtle cheekiness that allows him to make jokes about carrying the show, Konan’s height or asking Amelia Dimoldenberg, Big Narstie and himself to practice their rejection poses when the 2018 GRM Daily Rated Awards announce that none of them won ‘Personality of the Year’ this year.

Narstie comes through with wild statements and expressions that build off of those questions. Sometimes, he doesn’t even know who the guest is or what they’ve done. But that’s okay, because many people in the audience are in that exact same position. The must-watch segments of television derive from those clueless interactions and wild interpretations of who the guests are and what they do.

Let’s be honest, most television hosts don’t know much about every guest that comes on the show. The norm would be to hide those deficiencies, ‘The Big Narstie Show’ however, unapologetically embraces that unfamiliarity to its advantage.

Ed Sheeran: "I Walked In & Narstie Was Completely Naked Having a S***" | The Big Narstie Show

What also became clear as the show progressed is that Big Narstie has a fair few high-profile friends. David Haye said he’s had numerous offers for interviews but chose to first discuss his decision to retire from boxing on the show. Big Narstie and Jonathan Ross have smoked a spliff together, David Schwimmer said Mo Gilligan is welcome to crash at his house when he visits New York and we also learnt that Narstie violated Ed Sheeran’s toilet the first time he stayed over.

Throughout the series there was a healthy mix of high-profile guests and musicians, including Ed Sheeran, Jonathan Ross, David Haye, Giggs, David Schwimmer, Thandie Newton, Keith Lemon, Richard Ayoade and Krept & Konan. Adding to that was live performances from Not3s, Mr Eazi, Stefflon Don, Izzie Gibbs and Narstie himself, with Sian Anderson and Ras Kwame providing DJ sets too.

The first season of ‘The Big Narstie Show’ was laugh out loud funny, not many shows evoke more than a few light chuckles. But it was always going to be, given the hilarity of Big Narstie and Mo Gilligan. Let’s just hope that many more seasons follow suit and we look back at this series as the start of something special rather than a missed opportunity.