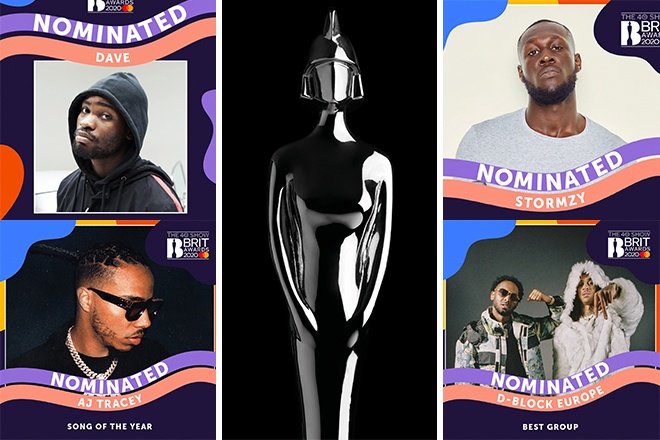 Posted at 02:25h in All Articles, News, News Main by Plugsville

Brit Award nominations 2020 – This year’s list of nominees features a heavy dose of grime and UK rap, with Dave, Stormzy and D Block Europe among those nominated.

The 2020 Brit awards will be held at the 02 Arena on Tuesday 18 February 2020 and will be hosted by Jack Whitehall. The awards for best video and best international group have been removed this year, while the producer of the year gong will be revealed closer to the ceremony.

Each year, the list of artists put forward serves up a few topics of discussion, so Plugsville has rounded up the five main talking points from the Brit Award nominations 2020:

A chart-topping single, chart-topping project, a Mercury Prize award for best album and 44 weeks in the charts and counting. Dave’s Psychodrama release went as many expected it would and catapulted him into the highest echelons of British music.

The ‘Streatham’ rapper is tied with Lewis Capaldi for the most nominations (four) across best album, best song, best new artist and best male artist. As well as commercial accolades, there is a feeling among fans that Psychodrama was one of, if not the very best album of 2019. Some would even call it a classic-in-waiting, as we did in our review of the project, which you can read here.

Lewis Capaldi’s debut album was the fastest-selling debut album of 2019, with over 90,000 units shifted in the first week. It is currently two-time platinum-certified. Those numbers are hard to argue with, but this isn’t the weekly charts, this is an award show ranking the best music.

Even though Dave’s Psychodrama and Stormzy’s Heavy is the Head album might not have had the same commercial impact as Divinely Uninspired to a Hellish Extent, culturally, both projects were huge and represented historic moments within grime and UK rap.

Dave’s accolades have been documented above, while 2018 album of the year winner Stormzy ticked off headlining Glastonbury and securing a second #1 album and single off of his bucket list. The recency factor of Stormzy’s album could sway things his favour, while the lyrical prowess Dave displayed on his debut might edge it. Either way, it will be a close battle for the biggest prize of the night.

D Block Europe get their flowers

Coldplay, Foals, Bring Me the Horizon, Bastille and D Block Europe. Four of those nominees are established bands all signed to major record labels. The other nominee, D Block Europe, remains unsigned and self-serving yet still find themselves battling among the country’s biggest groups for one of the biggest awards in British music.

After learning of the nomination, Young Adz tweeted: “It means suttin different when u coming from nothing”, summarising what it means for two rappers to go from ‘the streets’ to the Brit Awards. In 2019, Young Adz and Dirtbike LB released three projects. All three charted in the top 10 of the album charts – Home Alone (#6), PTSD (#4) and Street Trauma (#9).

The duo also secured eight charting singles from their own projects, including three top 20s in Kitchen Kings (#16), Home P*ssy (#20), Nookie (#16). On top of that, they charted three times as feature artists, serving up another top 20 with their feature on DigDat’s hit ‘New Dior’. Commercially, DBE had a huge year on the charts.

Their second project of the year, PTSD, released in September, formed the basis of a nationwide tour which would see them sell over 50,000 tickets, including two sold-out shows at Alexandra Palace. It’s safe to say that DBE’s nomination was hard to deny.

Mabel - Don't Call Me Up

Of the 193 albums considered, only 35 were by women, according to The Guardian. Out of a possible 20 mixed-gender slots across best album, best group, best new artist best song, there are only three female nominations – two in best song (Mabel, Miley Cyrus) and one in best new artist (Mabel).

With no female artist nominated for best album, that means it will be a five-year wait, at least, to see another female artist take home what many consider to be the top prize at the Brit’s. The last winner was Adele back in 2016.

An explanation was given alongside the Brit Award 2020 nominations, suggesting that the record labels considerably influence which artists are put forward for consideration: “The eligibility list has been compiled by the Official Charts Company and includes artists who have released product and enjoyed top 40 chart success. Record companies have had the opportunity to inform Brit Awards Ltd (BAL) of any eligible artists they wish to be added or inform BAL of any incorrect entries.”

Independent artists appear to have been overlooked somewhat in the race for best new artist. Given that AJ Tracey’s self-titled debut album peaked at #3 and produced a song in ‘Ladbrooke Grove’ which has sold over one million units and still remains in the charts 44 weeks after its release, he might feel some type of way that he was ‘only’ nominated for best song, an award which he won’t be favoured to win. D Block Europe was nominated for best group, indicating they are at a level to compete with bands like Coldplay and Bastille.

Here is the full list of Brit award 2020 nominations:

Stormzy – Heavy Is The Head

Mabel – Don’t Call Me Up

Mark Ronson feat. Miley Cyrus – Nothing Breaks Like A Heart

Lewis Capaldi – Someone You Loved

Tom Walker – Just You And I

Bring Me the Horizon