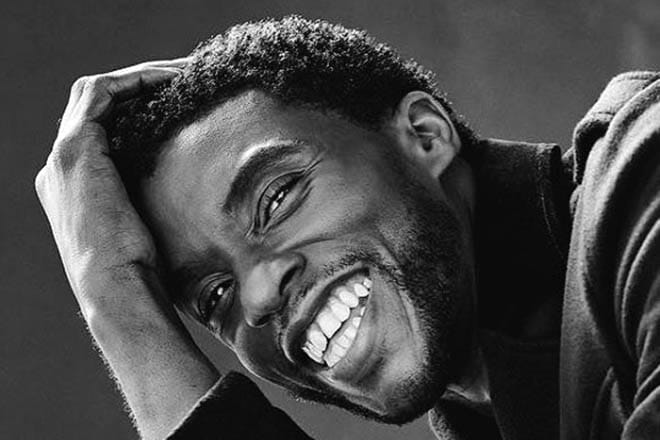 Posted at 07:37h in All Articles by Plugsville

Chadwick Boseman has sadly died at the age of 43 after losing his battle with cancer.

A message was posted to his social media channels in the early hours of Saturday morning confirming the news. The message revealed that Chadwick had been suffering from colon cancer for the past four years. Here is the full statement:

“It is with immeasurable grief that we confirm the passing of Chadwick Boseman. Chadwick was diagnosed with stage III colon cancer in 2016 and battled with it these last 4 years as it progressed to stage IV.

A true fighter, Chadwick persevered through it all, and brought you many of the films you have come to love so much. From Marshall to Da 5 Bloods, August Wilson’s Ma Rainey’s Black Bottom and several more her latest blog, all were filmed during and between countless surgeries and chemotherapy.

It was the honor of his career to bring King T’Challa to life in Black Panther. He died in his home, with his wife and family by his side. The family thanks you four your love and prayers, and asks that you continue to respect their privacy during this difficult time.”

As well as his role in Black Panther, which officially became the highest-grossing superhero film ever in America earlier this year, Boseman was known for tacking this site other iconic roles in the form of Jackie Robinson in 42 and James Brown in Get On Up.

After many years of hard work, he finally found a breakthrough with his career in film with his role in 42 back in 2013 and has since gone on to become a global icon thanks to his portrayal of T’Challa in Black Panther.

Many celebrities took to social media to pay their respects to Chadwick Boseman. Here are some of the tributes, including this amazing clip of Chadwick surprising fans on The Tonight Show with Jimmy Fallon:

I’m absolutely devastated. This is beyond heartbreaking.

Chadwick was special. A true original. He was a deeply committed and constantly curious artist. He had so much amazing work still left to create. I’m endlessly grateful for our friendship. Rest in power, King💙 pic.twitter.com/oBERXlw66Z

This is a crushing blow.

May you have a beautiful return, King. We will miss you so. pic.twitter.com/jdip3RHoXb

Our hearts are broken and our thoughts are with Chadwick Boseman's family. Your legacy will live on forever. Rest In Peace. pic.twitter.com/QNvzuZgAbe

All I have to say is the tragedies amassing this year have only been made more profound by the loss of #ChadwickBoseman. What a man, and what an immense talent. Brother, you were one of the all time greats and your greatness was only beginning. Lord love ya. Rest in power, King.

i will miss you, birthday brother. you were always light and love to me. my god … ✌🏿♥️✊🏿 🙅🏿‍♂️ forever and ever … https://t.co/9pORaKZuQN pic.twitter.com/awX3DiTVwn