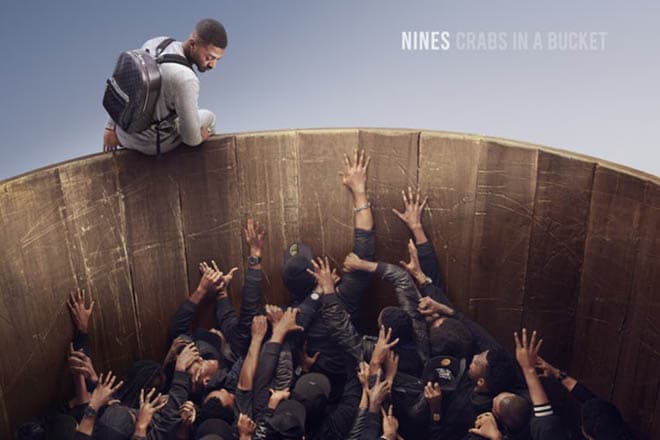 28 Aug 2020 Crabs In A Bucket: Nines ups the levels with the release of his third studio album

Posted at 22:55h in All Articles, News, News by Plugsville

Nines has released his highly-anticipated third studio album, Crabs In A Bucket.

The UK rap veteran ends his hiatus, having not released a body of work since his top-five and widely-acclaimed sophomore offering, Crop Circle, back in April 2018. The 17-track record features a number of artists, including NSG, Headie One, Skrapz, Nafe Smallz, Louis Rei (WSTRN), NorthSideBenji, Roy Woods, Cherrie, Clavish and more. In typical fashion, he also has yet another track with Tiggs Da Author in the form of ‘NIC’, which follows on from songs like ‘Yay’ and ‘Oh My’ from previous projects.

In November 2019, Nines teased fans with the release of ‘Pride’, although, in hindsight, that appeared to be more of a throwaway track getzonedup.com to remind fans something bigger was on the horizon, rather than album feature. The two lead singles from the album, ‘Clout’ and ‘Airplane Mode (feat. NSG)’, garnered a lot of heat on social media for the creativity on display, creating a big buzz around the release of his new album.

The second single from Crabs In A Bucket, ‘Airplane Mode’, features a cameo from the ever-ascending YouTube star Chunkz, with NSG providing assistance throughout in another incredibly slick visual offering, set inside a jet, among other locations.

Crabs In A Bucket is also Nines’ first album under Warner Music, having released his first two, One Foot Out and Crop Circle, under XL Recordings. To accompany the record, Nines also released a short film, the latest Ice City film, which shines a light on his rise to fame, tour life, mental health and more websites. You can watch the film by clicking here.

Stream Nines – Crabs In A Bucket below on Spotify or Apple Music: