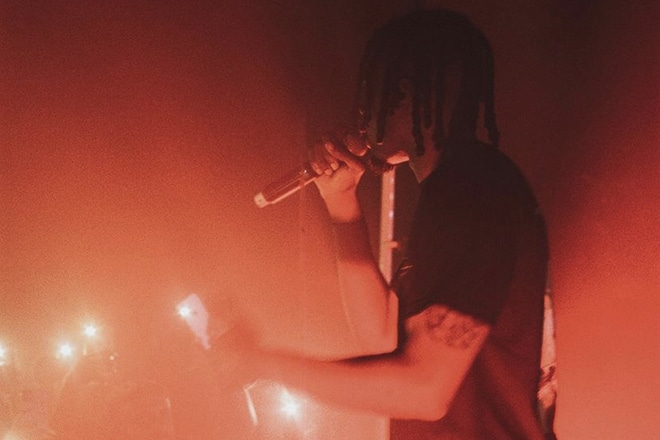 Posted at 17:44h in All Articles, Events by Plugsville

‘Best night of my life’. That’s how Greenwich rapper DC described his headline show, which took place on 7 September at the Camden Assembly, a day after his birthday. For a show that’s been six years in the making, that description of the night makes sense, for it was an energetic display of an artist who is truly beginning to come into his own.

When we interviewed DC earlier this year, he spoke about his experiences touring with J Hus had given him some early experience of live performances, but it wasn’t until recently that he began to feel as if he had a solid grip on the art of working a live crowd.

The main takeaway from the night was that pretty much all of DC’s lyrics on his latest project, In The Loop, are loaded with meaning. When performed live, those noble lyrics and sharp punchlines hit deeper than they ever could while listening to his music in headphones. The project isn’t littered with filler content or weak punchlines, just an onslaught of authentic lyricism.

‘Don’t call me your bestie, when it got real you ain’t call me or text me’@dcworldmg shining at his headline show 🔌 pic.twitter.com/5I6qWEyf5R

The show itself was centred around his In The Loop EP, with all the tracks being performed throughout, with a dose of some of his earlier tracks spliced in for his day one listeners. His ‘Gleamin’ freestyle helped him gain prominence in 2015. Even though it had been six years since that went viral online, for day one listeners, it was a moment of vindication to finally see the track performed live.

Knucks was the only special guest on the night and he and DC left no doubts as to how much of a certified hit ‘Bobby & Rowdy’ is, with the track getting three wheel-ups, which you can watch below. The show ended with a performance of ‘Neighbourhood’, which the crowd recited back to him word-for-word, to cap off a great night of live music.

The pandemic had halted live shows for well over a year, but DC’s performance wasn’t just good because there had been a lack of live shows preceding it. The reason DC’s headline show was such a vibe, was because, for those that had followed his journey, everyone there was pleased that he’s going from strength to strength with his music. He’s the type of artist you want to see win, and after years of grinding to get this point, including a brief moment in 2019 when he thought about giving up on music, there was a feeling of fulfilment seeing an artist push through those barriers.

All of the tracks from his In The Loop project sounded much better in real life, simply because, when seeing the words recited live, you realise how much meaning each lyric packs and the authenticity DC exuberates. There’s a lot to admire from an artist given themselves to their music with an honest recollection of their experiences and how they view life.

The night ended with the crowd singing him a happy birthday, which was preceded by his team bringing him out a cake. It was a warming moment to cap a night in which his core fans could celebrate his growth over the years. DC’s show at Camden Assembly was his first, but it’s safe to say that it most certainly will not be his last.