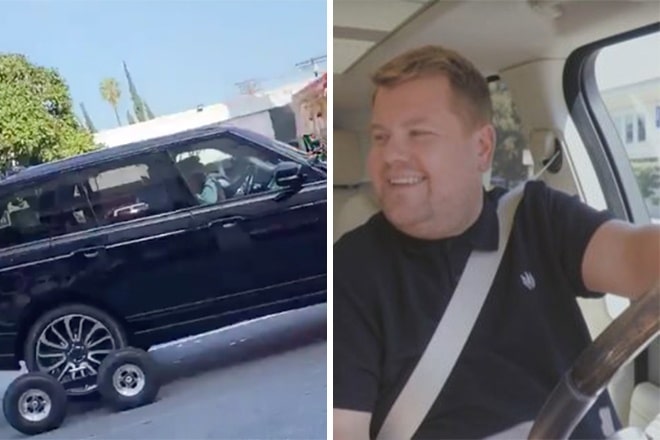 25 Jan Does James Corden actually drive during Carpool Karaoke? It would appear not

Posted at 00:03h in All Articles, News, News Main by Plugsville

Given the ease at which the segment is usually filmed, it would be fair to wonder does James Corden actually drive during Carpool Karaoke? It would seem the answer to that burning question is no.

A viral clip surfaced of Corden and Justin Beiber being driven around via a truck instead of actually driving, sending the internet into a meltdown in a quest for the truth.

Instead of actually driving a car, the video shows a truck tows a car around town while James Corden sits in a still car pretending to be navigating alongside his guests.

Saw James corden and Justin Bieber filming carpool karaoke and this is why I have trust issues — he isn't even driving! pic.twitter.com/bkP9moGJmu

Carpool Karaoke co-creator and executive producer on The Late Late Show, Ben Winston, spoke out on the controversy on Twitter: “Not true! We only use a rig when we are doing a “stunt” as part of the Carpool -- when it would be impossible for James to drive! This has occurred only maybe 4 times in 50 or so carpools… Safety is key! By stunt I mean -- dance routines / costumes / props etc ! Dont worry too much though. I’m pretty sure there are bigger issues to worry about!”

The idea for Carpool Karaoke was inspired by a segment filmed during a special Red Nose Day version of Gavin & Stacey back in 2011 where James Corden sang along with George Michael in a car. As well as his work on The Late Late Show, James Corden and fellow co-creator Ruth Jones ended the decade releasing the UK’s most-watched scripted TV programme of the 2010s, as 17.1 million viewers watched the Gavin and Stacey Christmas special within the first two weeks of its release.

guys, we don't even use a real car pic.twitter.com/O0sxMwNFtP

The first episode of Carpool Karaoke premiered in 2017 and has gone on to become an integral part of The Late Late Show, helping the show amass over 21.5 million YouTube subscribers. Previous guests include Mariah Carey, Ed Sheeran, Migos, Cardi B and Celine Dion. If anything, it’s a surprise that it took around three years to work out the answer to the question of does James Corden actually drives during Carpool Karaoke?, given the propensity of eagle-eyed fans to record everything and anything nowadays.

Justin Bieber previously recorded two editions of Carpool Karaoke back in 2015. His third edition is expected to be released later this month. In the meantime, here’s the episode featuring Adele: