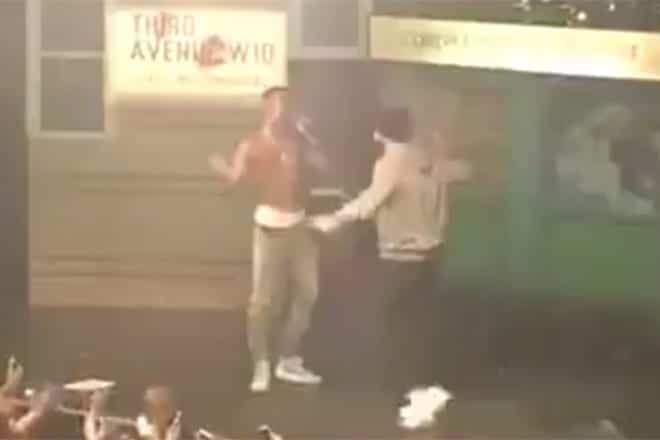 Posted at 23:16h in All Articles, News by Plugsville

Drake made a surprise appearance at Fredo’s show in Manchester.

The Scorpion artist popped up at the O2 Ritz Manchester during Fredo’s ‘Third Avenue’ tour to deliver a performance of ‘Nonstop’, sending the crowd into a frenzy.

On February 28 2019, Drizzy posted a cryptic story with a picture of the OVO owl next to a UK flag, suggesting a trip to these shores was on the cards imminently. A few days later, he posted a picture with world heavyweight champion Anthony Joshua, and then later, Giggs, alongside the caption: ‘H showing me how he recorded all verses for 187’.

.@Drake pulled up at @fredo’s show at @O2RitzManc to perform ‘Nonstop’ ?? pic.twitter.com/7Ru8CsApcs

Madness @Drake pulled up to @fredo Manchester show and lit it up ? pic.twitter.com/ntoQP3K3AT

Fredo’s debut album Third Avenue helped him secure his second consecutive top-five placement in the UK album chart’s, with ‘All I Ever Wanted (ft. Dave)’ serving up another top-20, to accompany his chart-topping feature on ‘Funky Friday’.

Two nights later, Drake’s ‘Assassination Vacation’ tour kicked off at the Manchester arena on Sunday 10 2019 and Drizzy brought out HRB rapper Fredo as well as Dave for a performance of ‘Funky Friday’, which you can watch below:

.@Drake brings out @fredo & @Santandave1 for ‘Funky Friday’ at his Manchester show ???? via @Balalxo pic.twitter.com/wwzbDrVnDs