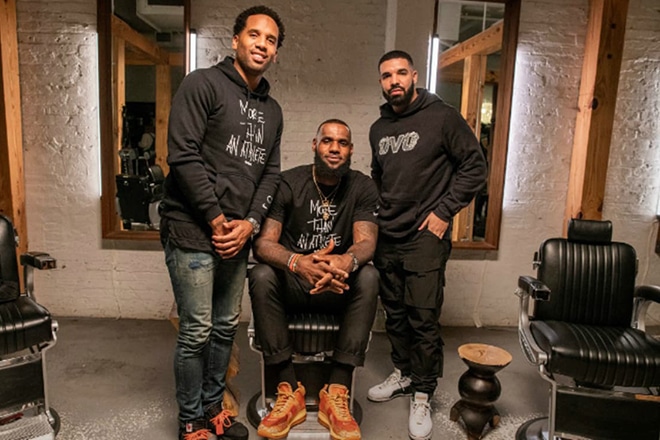 Posted at 14:54h in All Articles, News by Ajay Rose

Drake Kanye West Beef – Drizzy has got a few things off his chest in a recent interview.

Speaking on HBO’s ‘The Shop’ series, hosted by LeBron James alongside old friend Maverick Carter, Drake was one of a number of guests on the second episode, which also featured Ben Simmons, Victor Oladipo, Mo Bamba and Elena Delle Donne.

For more on Drake, you can view his top-10 ranked projects here, collaboration with Canada Goose here and you can also read more about how he squashed his beef with Meek Mill at a recent show in Boston.

The Scorpion artist sheds some light on his beef with Pusha T, why he didn’t respond to ‘The Story of Adidon’, fatherhood and of course, his growing feud with Kanye West. Check out the main highlights from the interview below.

Was the Pusha T fiasco the biggest challenge of Drake’s career?

“Challenge is a good word for it. I mean, I ended up linking with Ye. He sold me on this whole speech of I’m in a great place, I’m making money, I’m a father. I want to be Quincy Jones and help you. But in order to do that, you’ve got to be transparent with me and play me your music and tell me when you’re dropping even though you don’t like to do things like that.

“I was in the studio and we all felt a genuine vibe from him, so I played him my music and I told him when I was dropping. [Scorpion was around 60% completed at this time]. And then from there, it was all good. He played me ‘Lift Yourself’ and he was like ‘yo you can have this if you want’. Then I was hype, so I started writing to it. Then he was like ‘you gotta come to Wyoming’, so Wyoming happened.

“40 went to Wyoming early. He was like ‘man, I’m here a day early, but something’s off’. He was like ‘this guy is working on an album, man’. He just told me he wanted to give me beats and that he wasn’t dropping until October or November or something like that. But it’s all good, let’s just go and let’s see what it’s about.

‘Lift Yourself’ was originally meant for Drake

“So I went [to Wyoming] and pretty much ended up spending the majority of my time just working on his music, hooking up ideas for him. Just trying to lend a helping hand. So I was out there and pretty much spent all my time working on his stuff. Then we left Wyoming, we were like ‘okay, we left with ‘Lift Yourself and a pat on the back’. I’ll try and make the most of this and hopefully he’ll send some other things through.

“By the way, I’m in Wyoming, I play him ‘March 14th’, I send him a picture of my son. I tell him I’m having trouble with my son’s mother. We had a conversation. So I wake up and all these dates are out, one by one by one. All around June 15th, by the way. Then the next two days, I wake up to this text from him. He’s like ‘yo I love you brother’, then ‘Lift Yourself’ comes out, with him just talking nonsense.

“Oh, so this guy’s trolling me? This was like, a manipulative, I want to break you kinda thing. So I said ‘alright, I’m going to go back to distancing myself again’. I know what this is and then, the first album drops. And of course, there’s a diss song towards me, that you produced, that’s talking about writing?! But I was just there with you, as friends, helping you and now you’re dissing me. So I’m like ‘man, this is dark’.

“Actually, I text Bron [LeBron James]. It took me four days to really register what happened. And I text Bron and said ‘I hope you don’t let you down with my decision’ [to not do anything]. I was more concerned about the people’s whose opinions I respect. People love to say, rap purists and people who love confrontation, love to say ‘there’s no rules in this shit’, but there are fucking rules to this shit. And I’m going to tell you something.

“I knew something was going to come up about my kid. They had to add the deadbeat thing to make it more appealing, which is fine. I understand that. The mum and dad thing, whatever, you don’t even know my family. But wishing death on my friend that has MS. I study rap battles for a living. When you mention defenceless people who are sick in the hospital that passed away, that really sent me to a place where, I believed then and believed now, there’s just a price you have to pay for that.

“It’s over. Someone’s going to punch you in the fucking face. The shit’s done. The event’s over. I wanted to do other things. I didn’t want to further your reputation or career by having this exchange.

On writing an unreleased reply for ‘The Story of Adidon’

“I did [respond] by the way. I did. I said terrible things. I got home and listened back to it and I was like ‘man, this is not something I ever want to remembered for. This is not even a place I necessarily want to go’. By the way, hell of a chess move. The song, I thought it was trash, but the chess move was genius. Back against the wall, I either go all the way filthy or I fall back and have this chink in my armour for the rest of time, to a rap purist. Which is fine, I can live with that.

“I would much rather live with that then the things I was going to say and the research I did, not only for him, but the other guy [Kanye West] too. And now I feel pure, I’m good. You know what I did? I took that energy and put that into me. Not you. You don’t get that from me.

Watch a segment of the interview below, which sheds a light on the Drake Kanye West beef, before transitioning into a discussion about Pusha T. Find the full episode here.