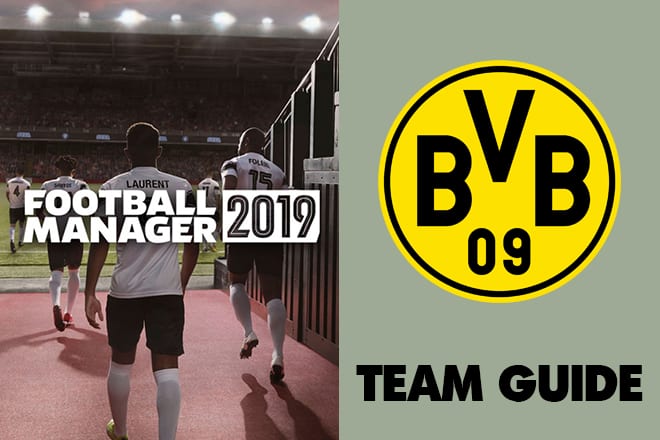 Football Manager 2019 Borussia Dortmund – BvB are armed with just the third-highest transfer budget in the Bundesliga heading into the 2018/19 season and are lumbered with the daunting task of overthrowing Bayern Munich, who have the highest starting transfer budget of any side in FM19.

Thankfully, Dortmund can rely promising young talent like Christian Pulisic, Jadon Sancho and Julian Weigl, as well as the seasoned Marco Reus and a solid squad across the board. In real life, BvB are six points clear at the top of the Bundesliga heading into the winter break, suggesting they have what it takes to bring home their first title since winning two in a row between 2010-2012.

PlugsvilleSport has put together this ultimate FM19 guide for you. We have listed Borussia Dortmund’s starting finances, two key players to build around, two of the best young players and the players you should consider selling if you need to raise funds. 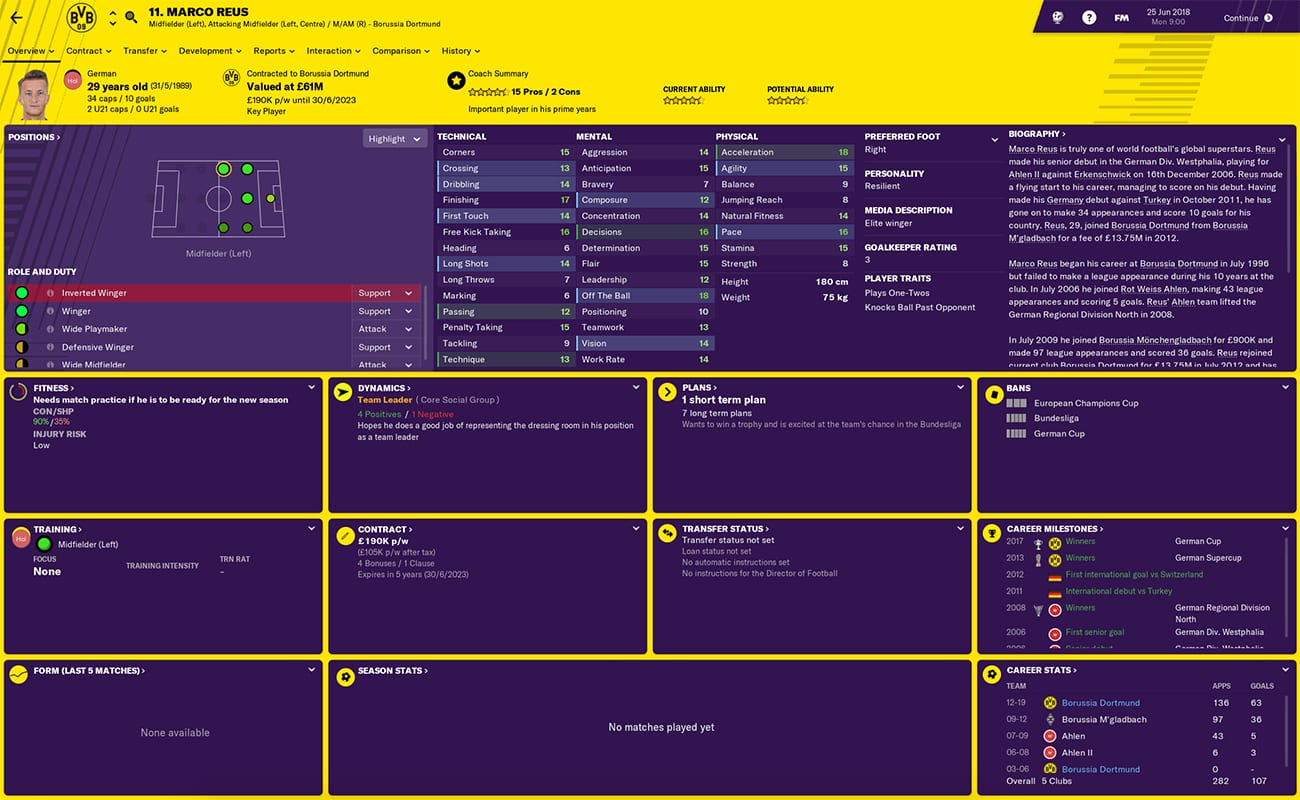 When fit, Reus is a devastating goalscoring threat that can terrorise most defences. But that’s the problem, the Dortmund favourite has an unfortunate injury history and hasn’t started 30 or more league games since the 2013-14 season.

Having said that, despite approaching the wrong side of 30, the German winger is still an elite talent who can play a starring role both domestically and in Europe. 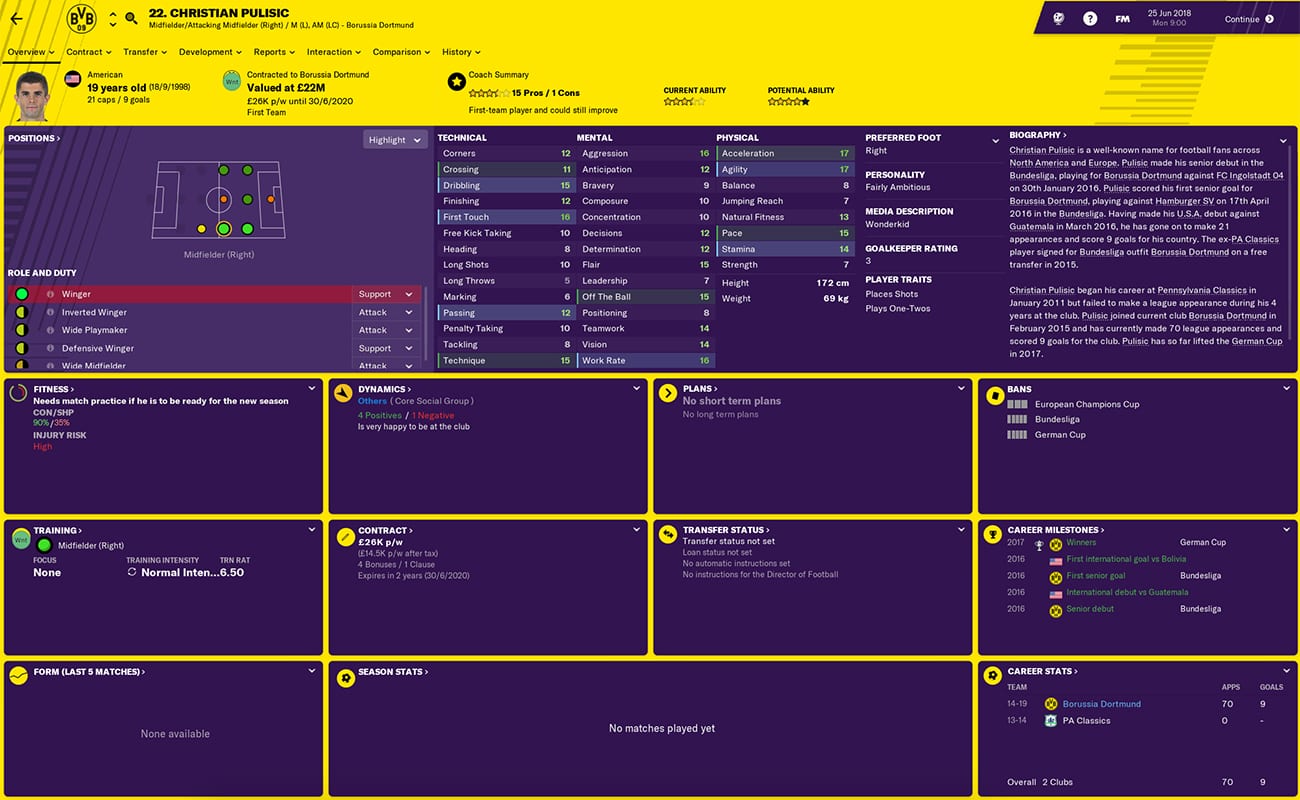 Opposite Reus and another key cog of Dortmund’s side for years to come (if they can find a way to keep him at the club) is Pulisic, a winger with huge five-star potential and enough talent to warrant a first-team spot from the get go.

The 22-year-old only has a year left on his deal after the 2018-19 season commences, so tying him down to a new deal as early as possible should be high on your to-do list. 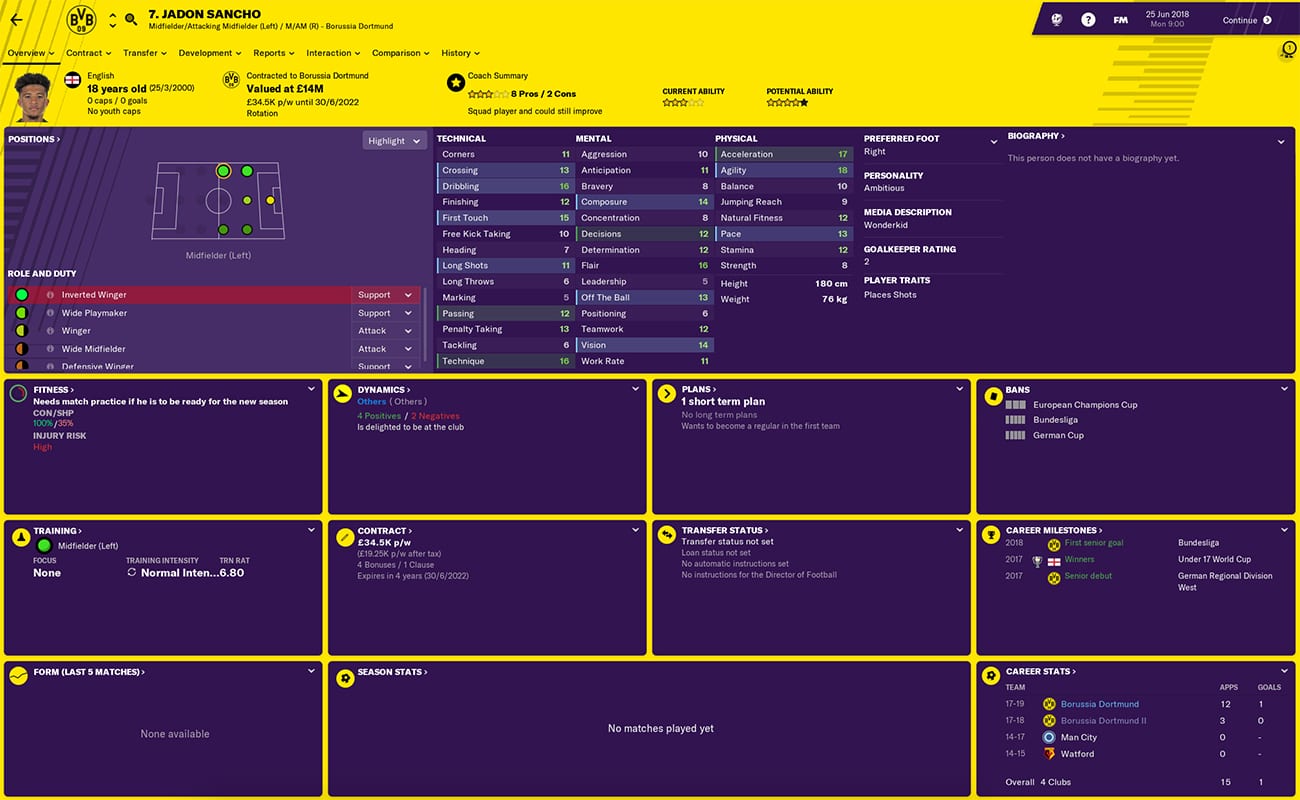 Manchester City’s decision to let Jadon Sancho sign with Dortmund for a fraction under £8m at the start of last season doesn’t appear wise, even for a club blessed with high-level attacking talent.

The English youngster, already a full international (although uncapped on FM19), is taking the Bundesliga by storm so far in the 2018-19 campaign and should definitely see a lot of game time throughout your time in the dugout at the Westfalenstadion. 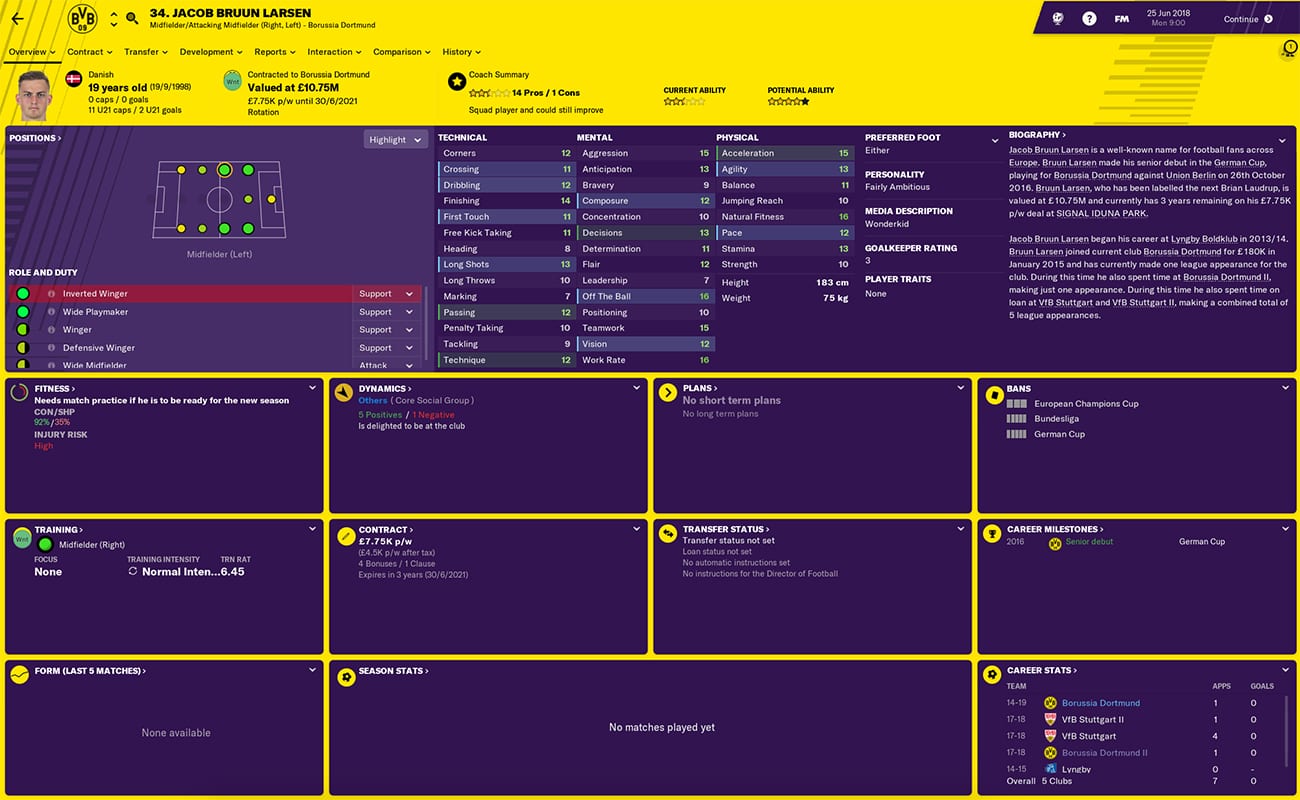 Larsen is slightly raw at the start of any game save on FM19, so he could benefit from being sent out on loan to a side willing to give him a decent run of games.

The Danish midfielder carries five-star potential but has limited experience at the highest level, making him one to watch in future. 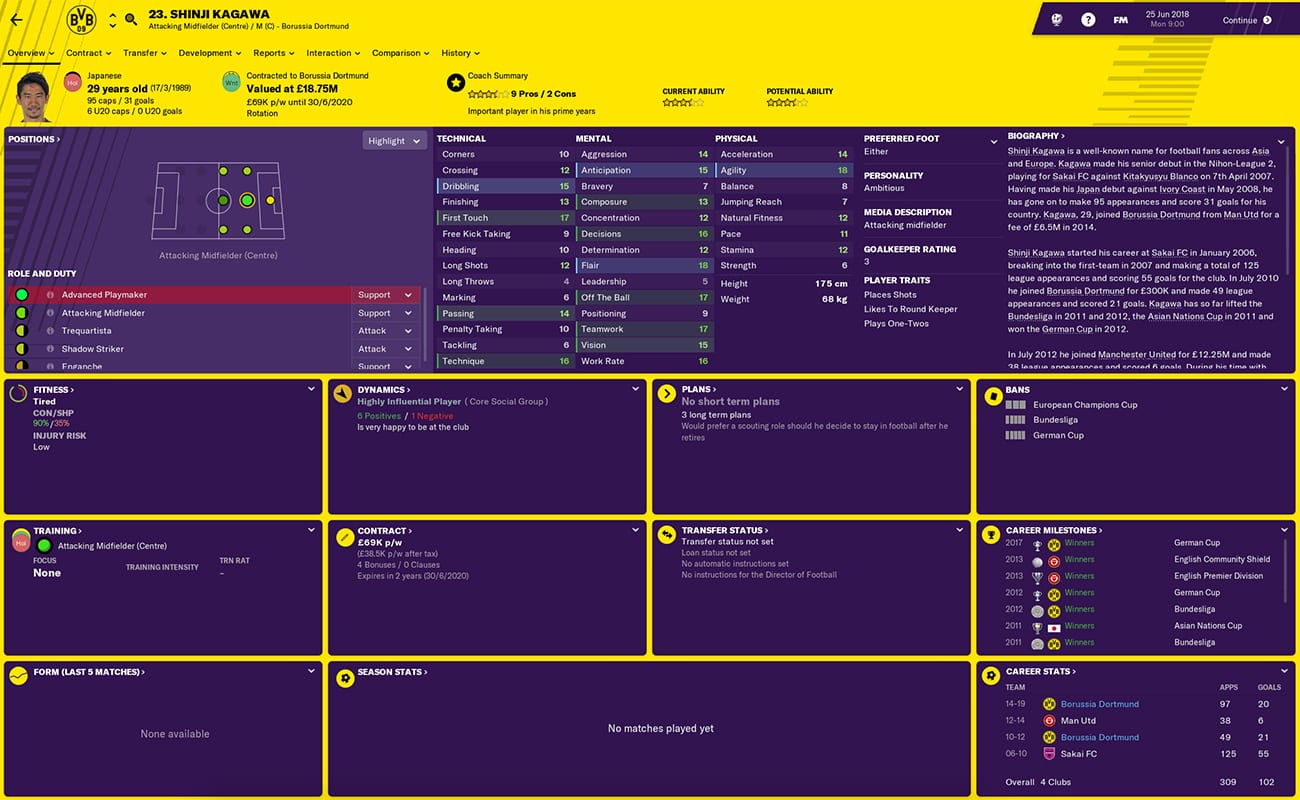 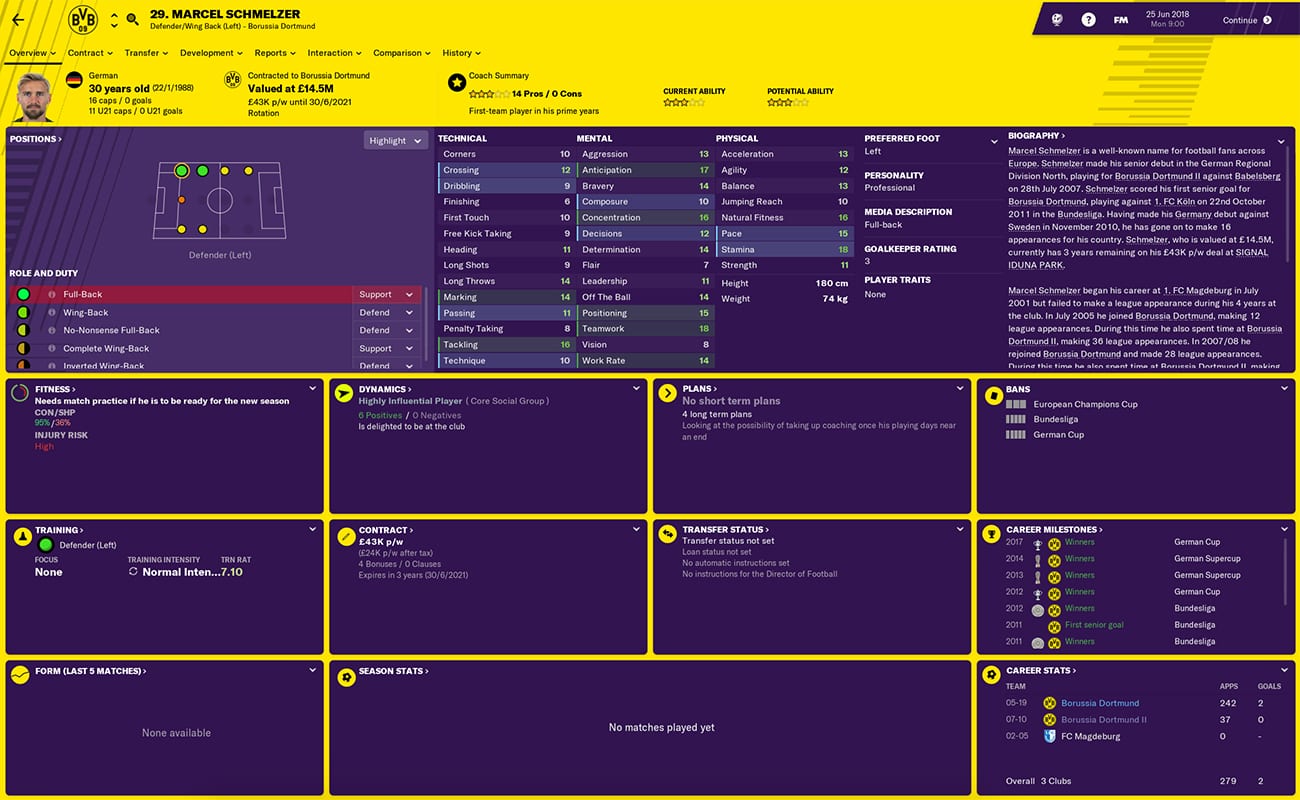