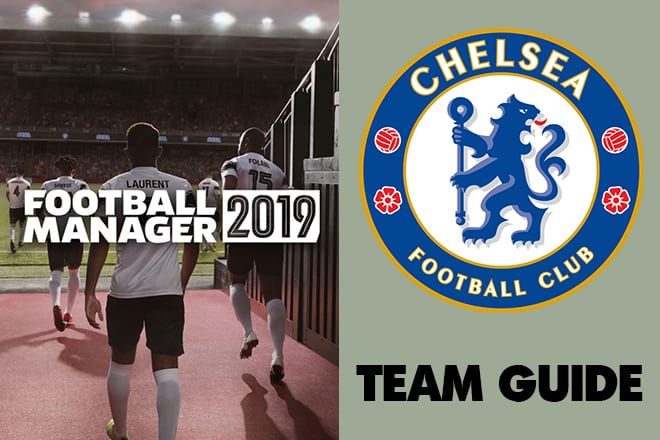 Football Manager 2019 Chelsea – The Blues find themselves in a precarious position heading into the 2018-19 season.

They are only one season removed from being the champions of England. But at the same time, Chelsea find themselves out of Europe’s premier competition and finished some 30 points behind league leaders Manchester City last season.

The task is simple – find a way to bring back the glory days to Stamford Bridge. To aid you in that quest, PlugsvilleSport has put together this ultimate FM19 guide for you. We have listed Chelsea’s starting finances, two key players to build around, two of the best young players and the players you should consider selling if you need to raise funds. 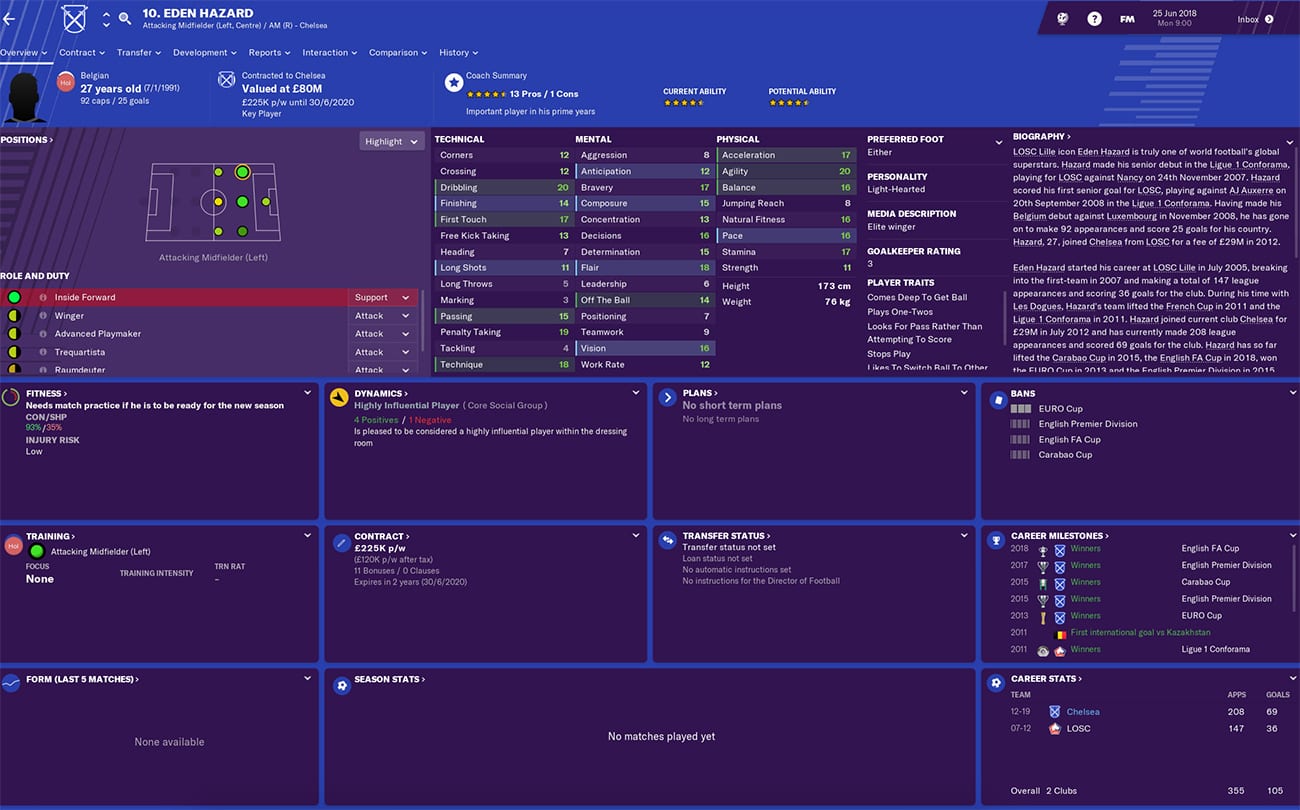 Keeping hold of players like Hazard is even more paramount in the absence of Champions League football, because if the tricky Belgian departs, he won’t be easy to replace.

The former Lille winger is central to any success you’ll hope to have. Hazard has the potential to win big games by himself and lead a title charge, and for good measure, he is also an extremely reliable penalty taker. 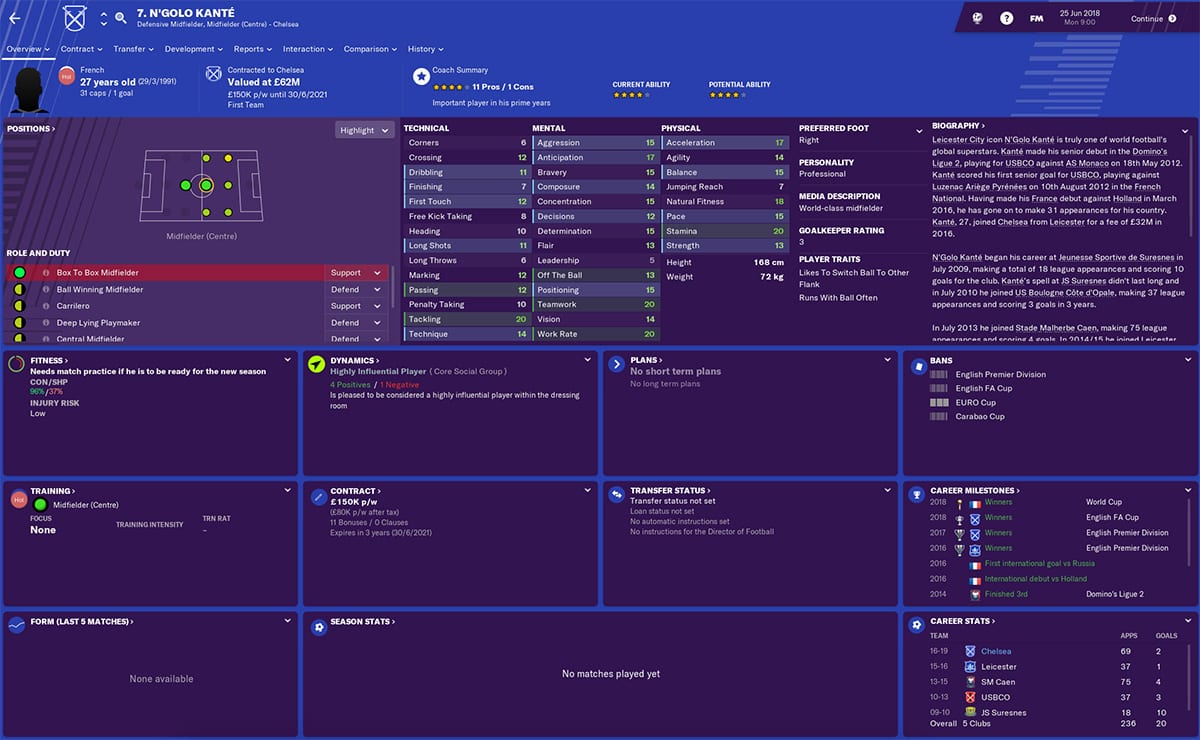 At the time of writing, the man widely considered to be the best defensive midfielder in world football just signed a new contract worth £290,000/week.

Thankfully, in FM19, his wages sit at around £150,000, but don’t be afraid to offer him a new deal if Europe’s heavyweights start showing interest. At 27, he’s entering his very best years with plenty of cup-winning experience. His starting value is £62m but he is rare commodity, so cashing in isn’t wise here. 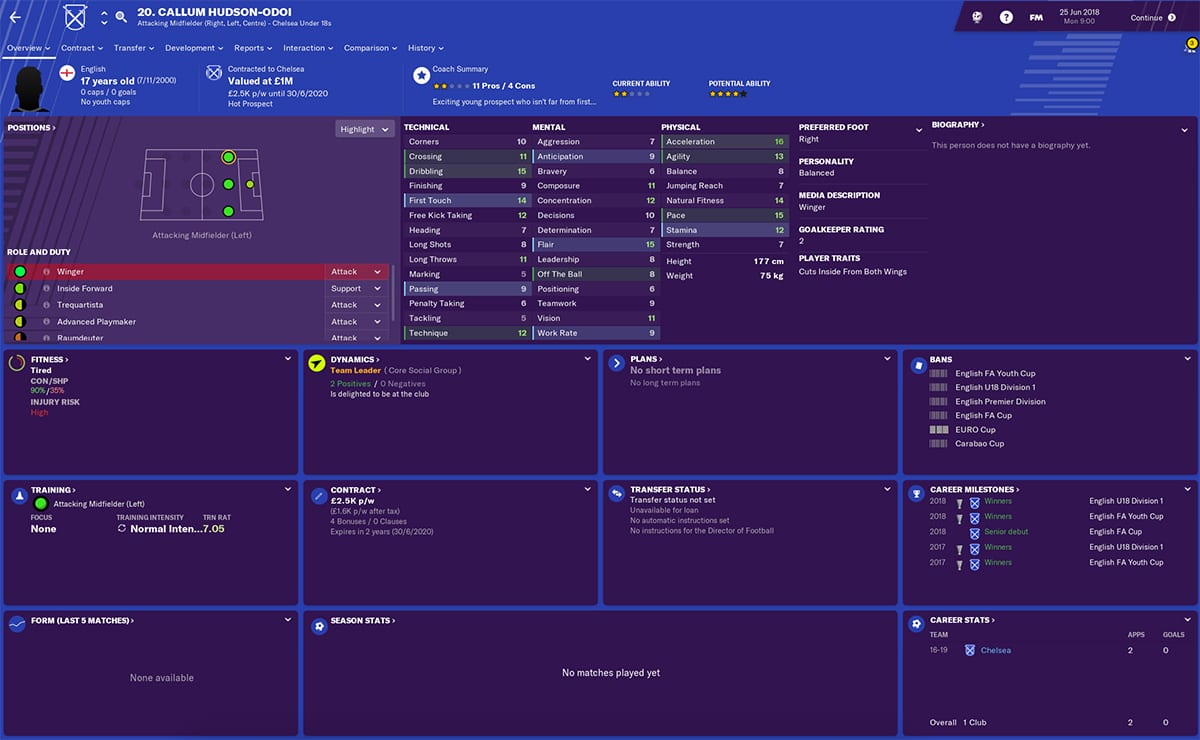 Rated as a five-star prospect, Hudson-Odoi has a bright future. Although, a caveat here is that the England youngster is that he would benefit from a season’s worth of first-team football elsewhere.

Using the winger sporadically in cup ties while allowing him to train with the first team also holds its perks, but a season away from the Bridge could do him wonders before fully integrating him into your first team for the 2019/20 campaign. 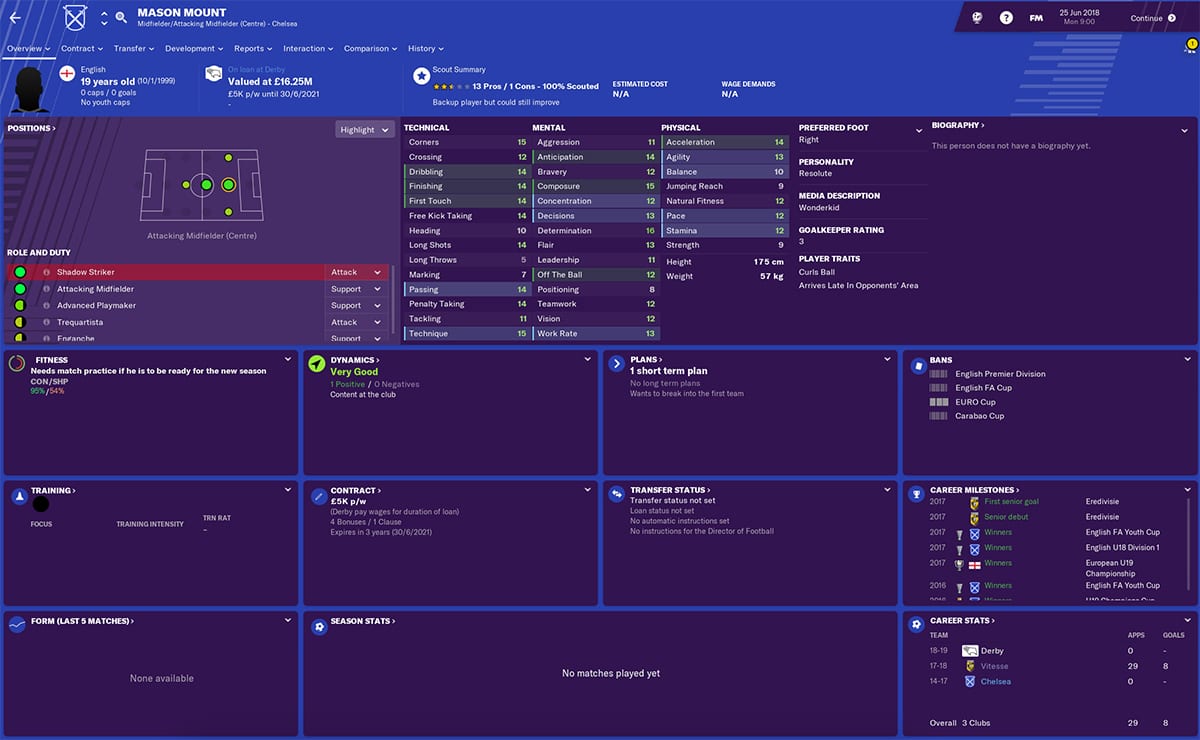 The attacking midfielder begins the season under the tutelage of Frank Lampard at Derby, who at the very least, are tipped to make the Sky Bet Championship play-offs, suggesting Mount will play meaningful minutes in a competitive league.

Best used as a number 10, Mason Mount carries four-and-a-half star potential and a hefty transfer fee, should you wish to train him up and sell him, akin to Chelsea’s transfer policy in recent years. 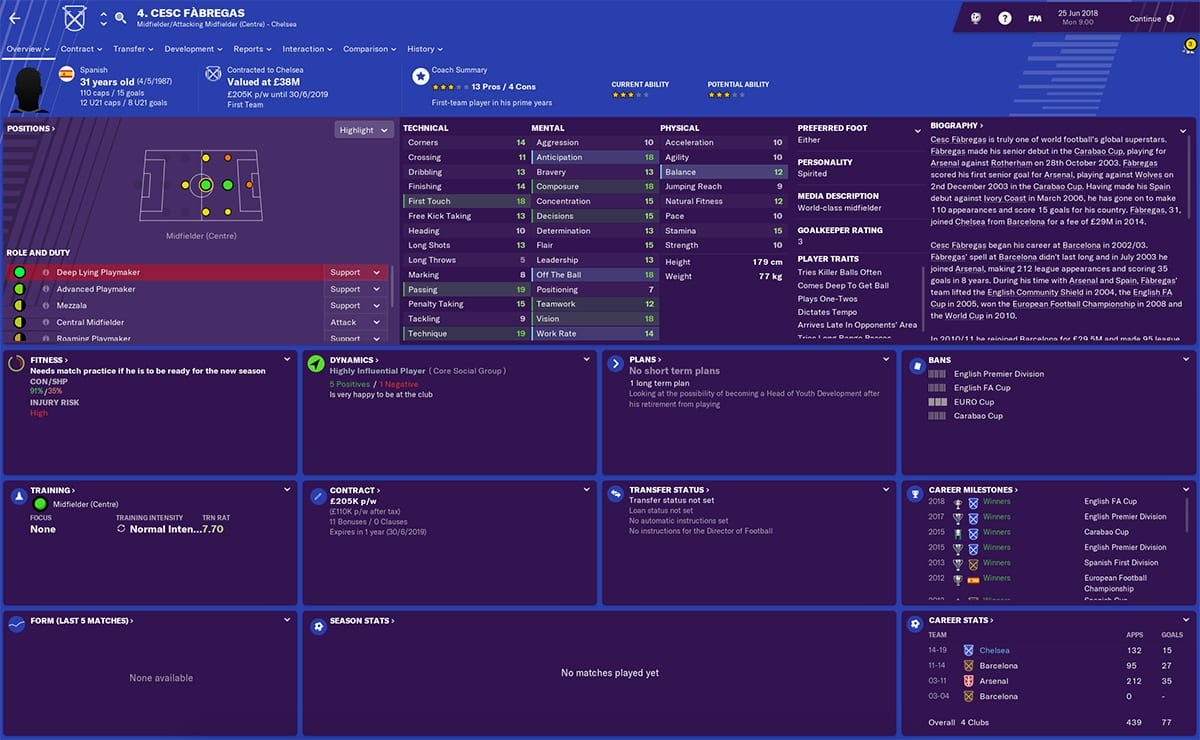 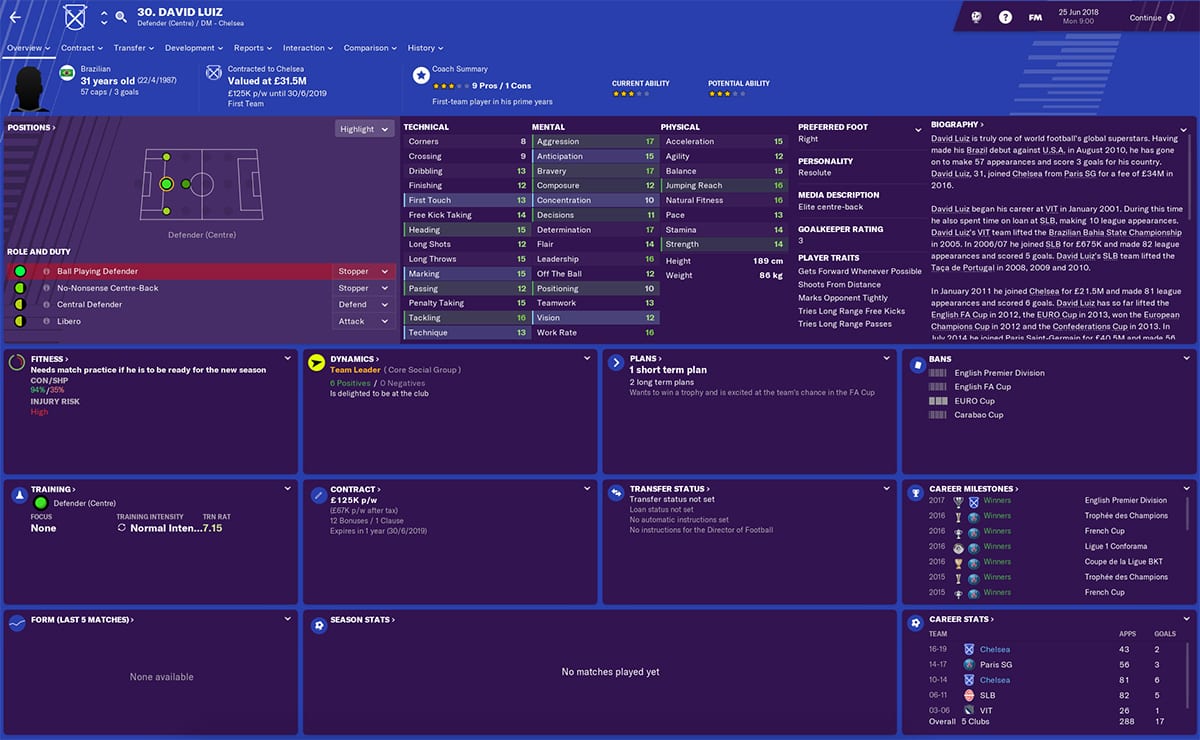 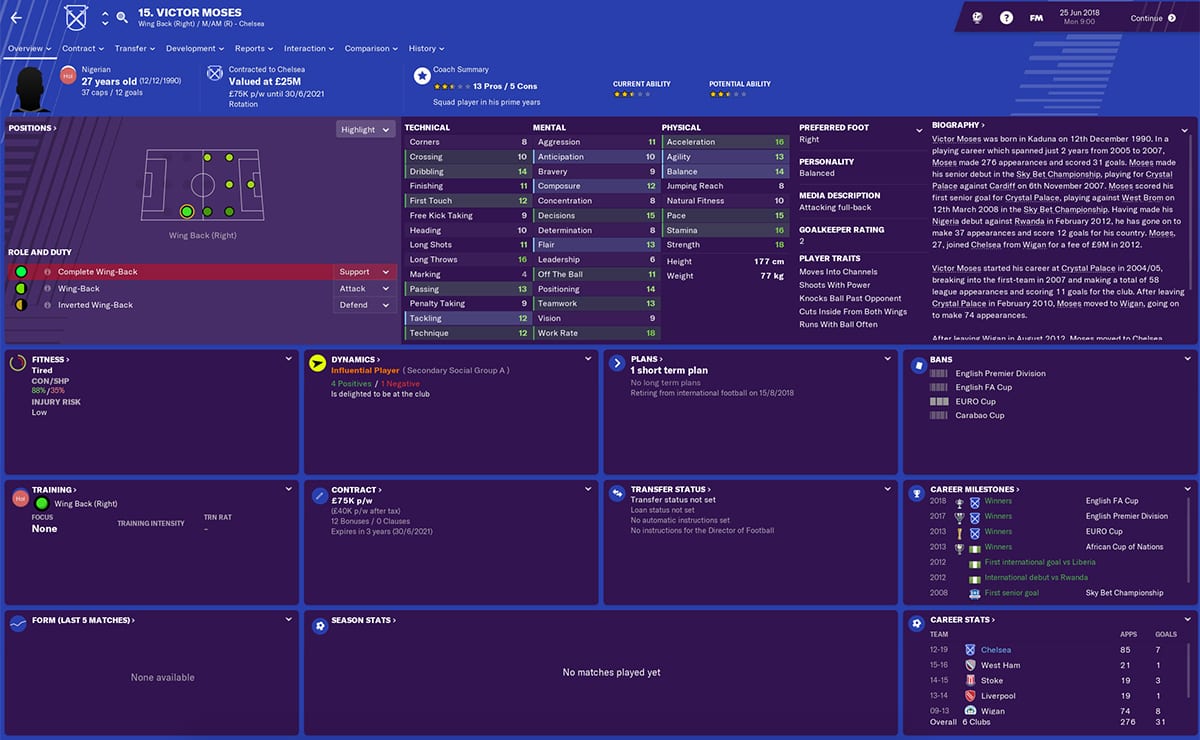