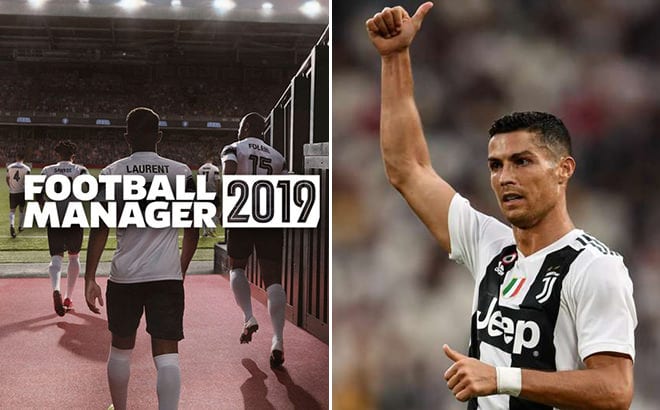 Football Manager 2019 Cristiano Ronaldo – He has already shown a willingness to switch clubs, having played in four European leagues in his career following an £80m switch to Juventus in 2018. After every domestic trophy available and the Champions League in both England and Spain, Ronaldo is on a new mission to take over Italy.

Given that the former Real Madrid icon is 33 at the start of a new file and relies heavily on his physical attributes to outwit opponents, there could be an opportunity for you to sign him at some point if Juve deem him expendable, as we will explore. 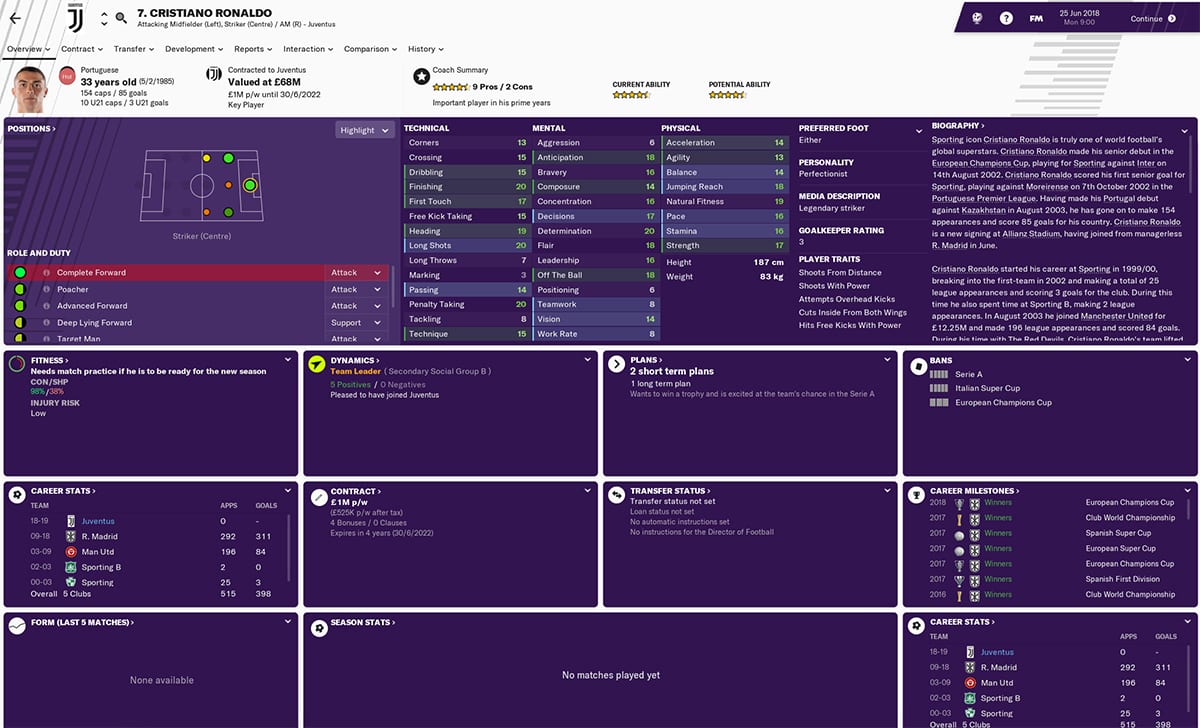 The only caveat with Ronaldo’s stats is that he is 33, two years older than his arch nemesis Lionel Messi, with a game that relies a lot on being physically superior to his opposite number. The Portuguese forward definitely has more elite years left in the tank on FM19, but the question is, how many? 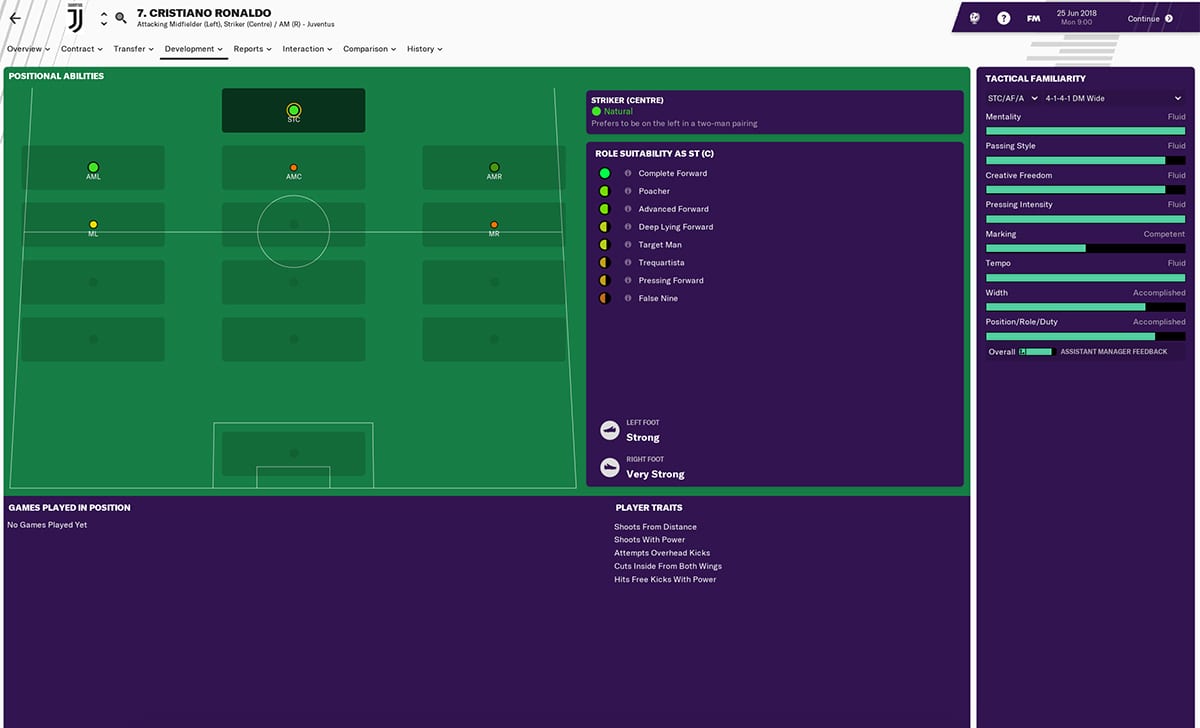 Ronaldo is most at home on this year’s edition of Football Manager as a central striker, specifically, when given the role of ‘Complete Forward’, tasking him to do basically everything, from linking play with midfield, holding off defenders, finishing off chances and laying them on for others. 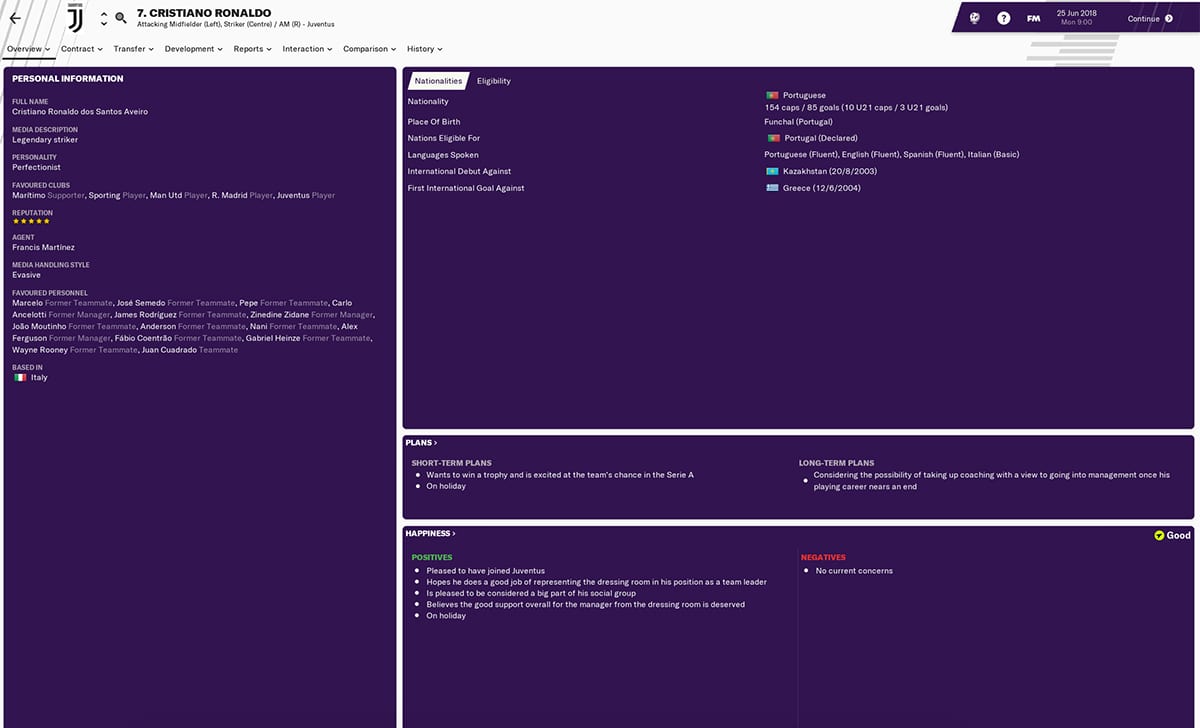 Just because he recently moved to Italy, it doesn’t mean he won’t ever move club again. Juventus already have Paulo Dybala (24) and Moise Kean (18) on their books at the start of any new game save in FM19, so if the Turin giants aren’t able to secure to achieve European with Ronaldo on the books, it’s likely they could look to sign another marquee forward, which could phase him out the club.

With that in mind, you will need to be in a position to take on his weekly wages, which will more than likely fall in-between the region of £500k-£1m per week. Given that Ronaldo is entering the latter stages of his career, his transfer value should decrease with time, so if you were able to configure a move for the Euro 2016 winner, there’s a chance he could be available for less than £100m.

PSG, Manchester United and Bayern Munich are among those who begin a new game save with the level of finances which could allow them to make a move for Ronaldo if it were possible. You can find the starting transfer and wage budgets for more than 150+ teams in Football Manager 2019 by clicking here.

Zinedine Zidane and Carlo Ancelotti are listed among his favourite managers, so even if your team isn’t able to sign him, don’t be surprised if Ronaldo joins another team managed by one of these two touchline experts in future.