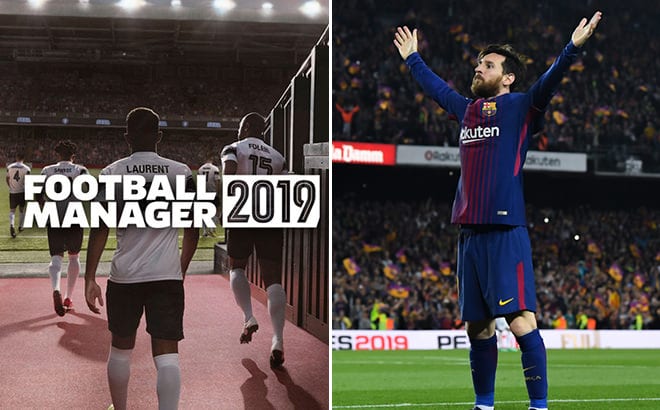 Every game save is different, but the likelihood is that most won’t ever see Messi leave Barcelona, although, there could be a few instances in which he is willing to depart the Nou Camp, as listed below. Here is a breakdown of Lionel Messi’s key stats, best position and information about how to sign him on FM19. 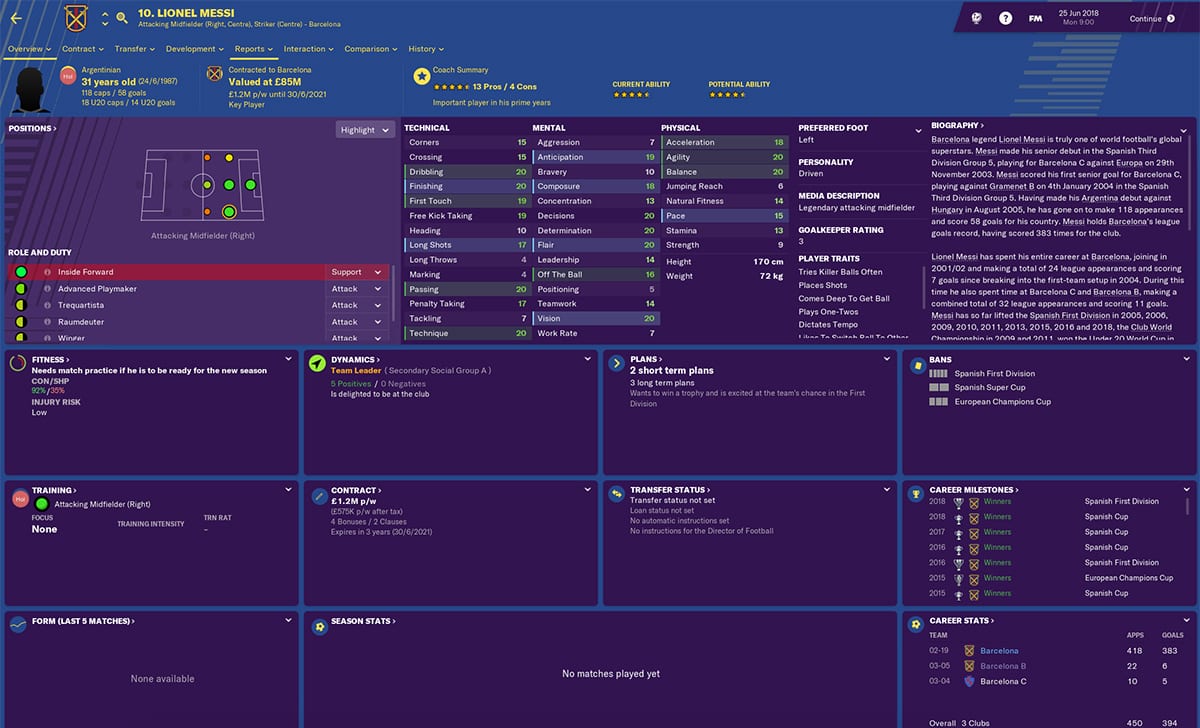 Across the board, the five time Ballon d’Or winner boasts outstanding stats rely more on his genius-like footballing IQ, rather than physical dominance, meaning his game should age well in the game. 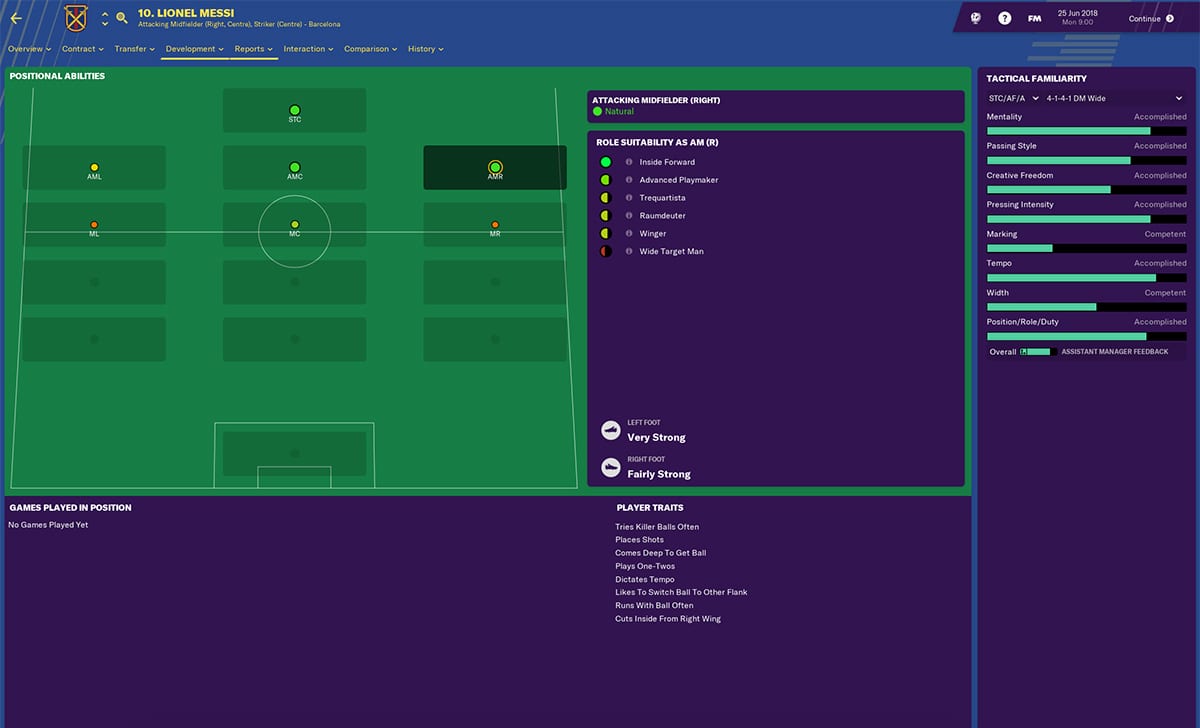 On FM19, Messi is best used as an attacking right midfielder (AMR) or just behind the striker (AMC). He can also be used up top, but he is best deployed when assigned the role ‘Inside Forward’ on the right or as an ‘Attacking Midfielder’ as a central attacking midfielder. 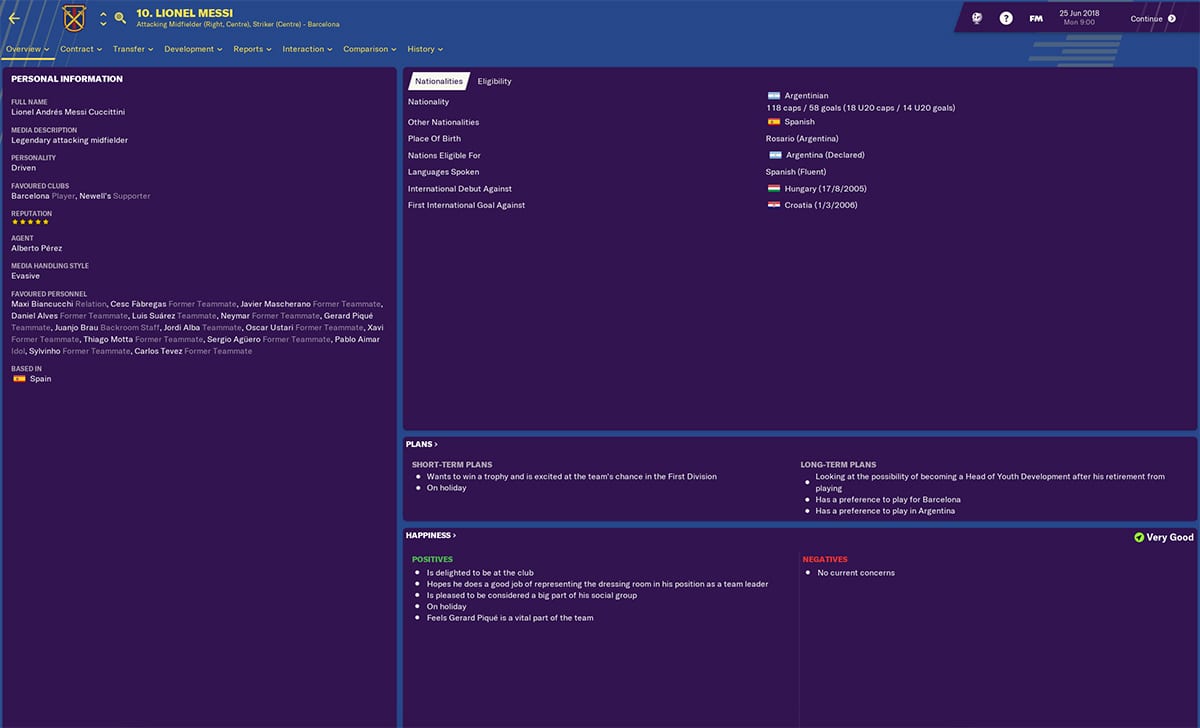 In order to sign Messi, you would likely have to pay upwards of at least £200m, and even if you do convince Barcelona to accept an offer, Messi could and probably would still reject any contract you offer him in favour of remaining in Catalonia.

However, if Barcelona don’t fare too well in your game save and fail to win the Spanish First Division (La Liga) or the ‘European Champions Cup’ (Champions League) for a few seasons, he could become unsettled. His loyalty rating is listed at 13/20 in FM19, suggesting that he could be open to a move under the right circumstances in one of your game saves.

Neymar and Dani Alves are listed among Lionel Messi’s favoured personnel, both of whom play for PSG, one of a few clubs who would even be able to afford his transfer fee and monstrous weekly wages.

Another route to signing him by his boyhood club. Messi has discussed returning to Newell’s Old Boys to retire, the club Barcelona signed him from as a 13-year-old, and that desire is also listed as a long-term preference of his at the start of any gave save.

You could take over Messi’s first-ever club and wait it out for him to run down his contract, but his current deal expires in 2021, by which point, he will still be playing at an elite level in Football Manager and will therefore be more likely to sign another contract. So if your plan is to take over Newell’s and hope to bide your time, you may be waiting a while.