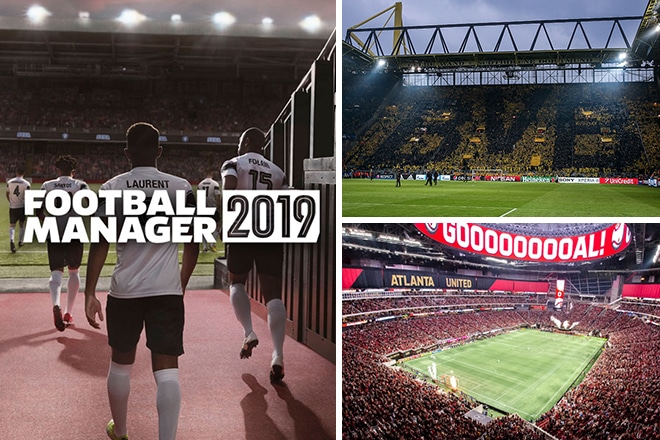 Football Manager 2019 Teams to Manage – With thousands of teams to choose from, you’d be forgiven for having two or three-game saves on the go at any one time.

To aid you in that quest to achieve multi-management glory across many different virtual worlds in FM19, we’ve compiled a list of 15 challenging teams to manage in the new iteration of Football Manager.

We’ve provided you with each team’s starting transfer and wage budget, as well as summarising the challenge that lies in wait, outlining each team’s strengths and weaknesses. So without further ado, here are PlugsvilleSport’s 15 Football Manager 2019 teams to manage that you need to know about. 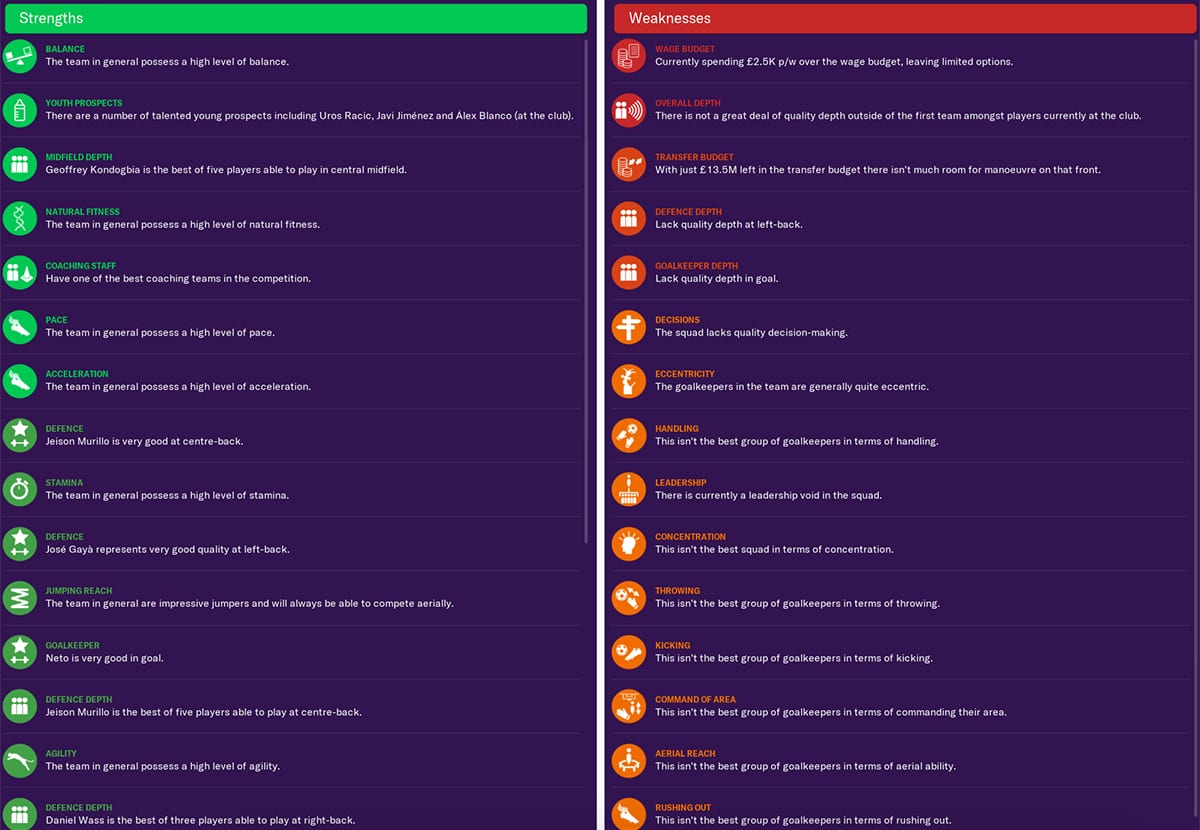 The once-mighty former Spanish giants have one of La Liga’s five highest transfer budgets on FM19, but beyond that, the club also have a few interesting youth players budding through (find out who they are here).

Dethroning Barcelona, Real Madrid and Atletico Madrid will prove tough, but with Champions League football under their belt and a nucleus of Rodrigo, Goncalo Guedes, Jose Gaya, Dani Parejo and Geoffrey Kondogbia to build around and some exciting young players coming through, it’s not impossible. 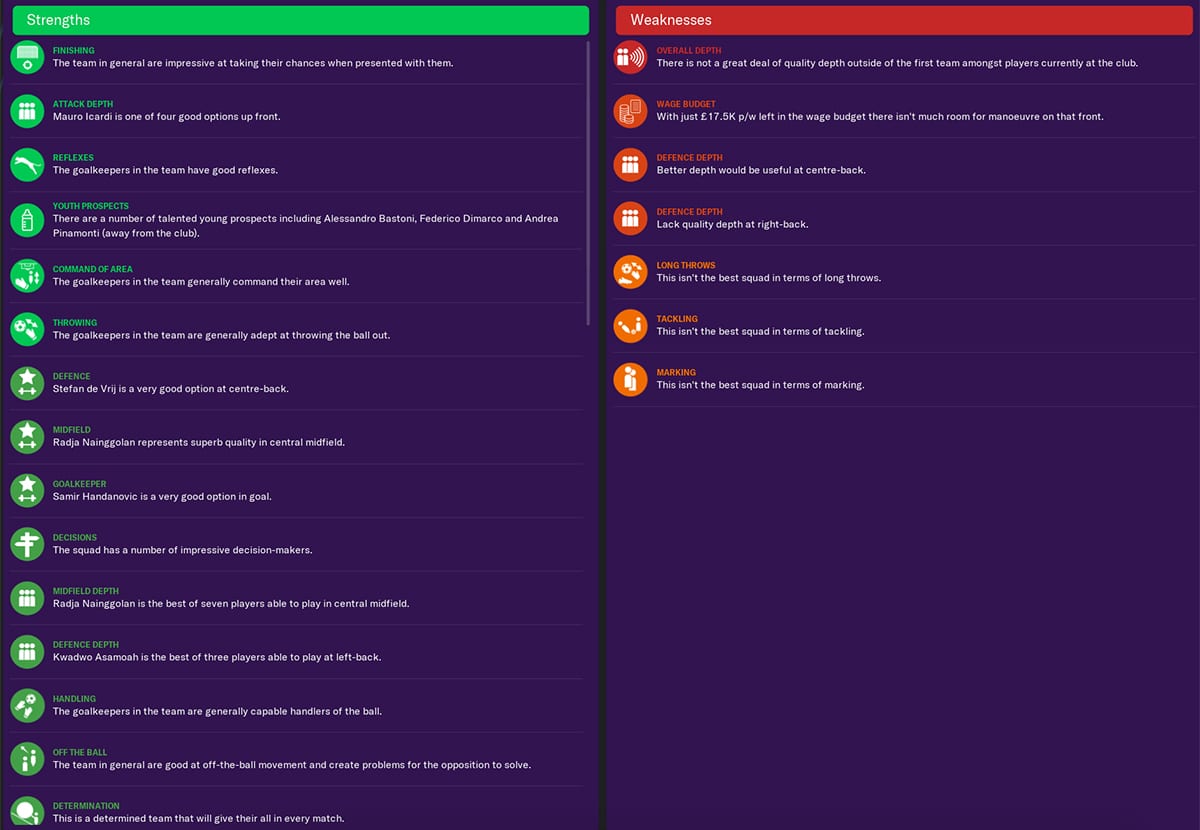 The last time Inter won Serie A was back in 2010, back when Jose Mourinho lead the blue half of Milan to the first ever Italian treble after winning the Champions League and Coppa Italia. Juventus have gone on to win the past seven Scudetto’s, but are yet to join Inter Italy’s treble club, a society which only Inter have membership to.

Juventus signed Cristiano Ronaldo this summer in a bid to ensure their domestic dominance is finally reflected on the European stage. So where does that leave Inter? Lead by controversial club captain Mauro Icardi, Internazionale are ranked as the Old Lady’s biggest challengers heading into the 2018-19 season by the FM19 media. Can you go one better and dethrone Massimiliano Allegri’s side? 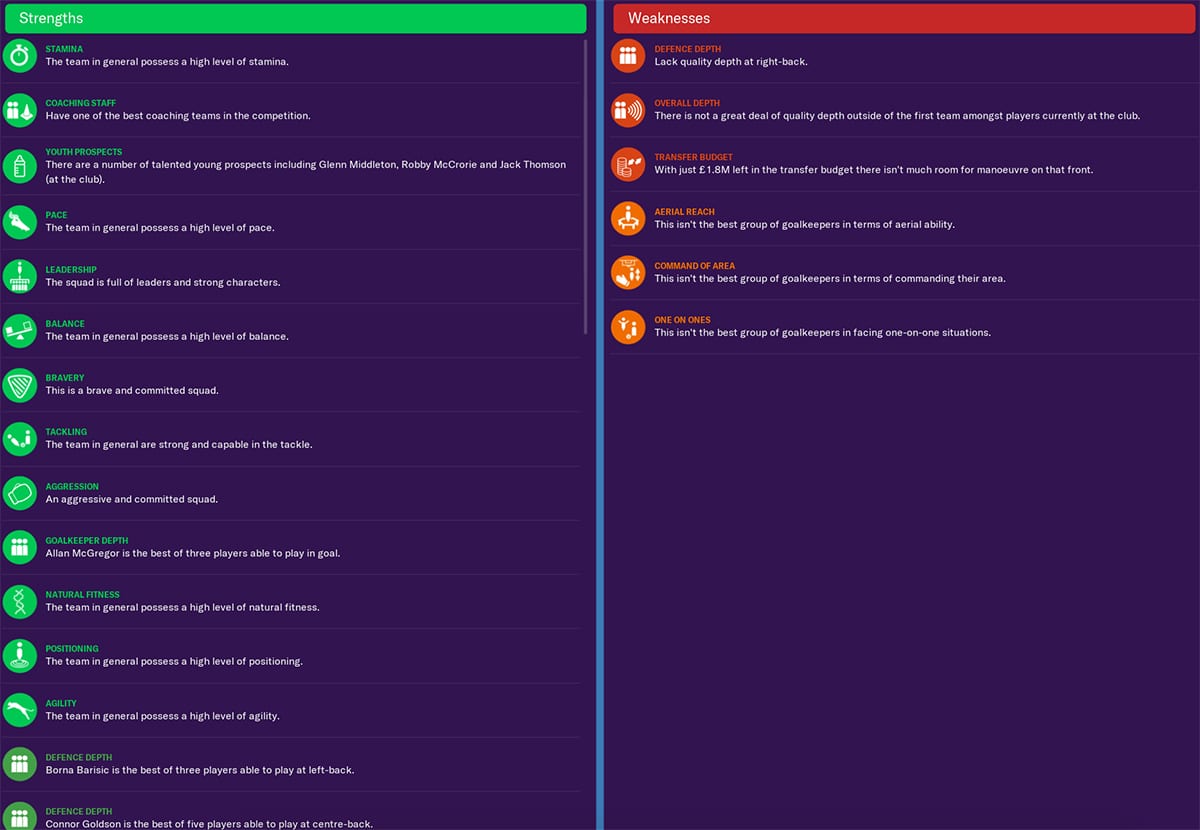 Steven Gerrard’s start to life in management has been impressive, aided by the Glasgow outfit’s busy summer, which saw the Liverpool legend bring in many of his own bodies. Rangers still have a fairly reasonable budget of £1.8m (relative to the finances of other teams in the Scottish Premiership) left in the bank and just over £15k per week to offer in wages. That means you can squeeze one or two more shrewd deals to add to a squad tasked with juggling a Europa League campaign.

Celtic have won the title seven years on the bounce, but with one the league’s stronger squads and European football on offer to prospective signings, they propose an interesting addition to this list of Football Manager 2019 teams to manage. 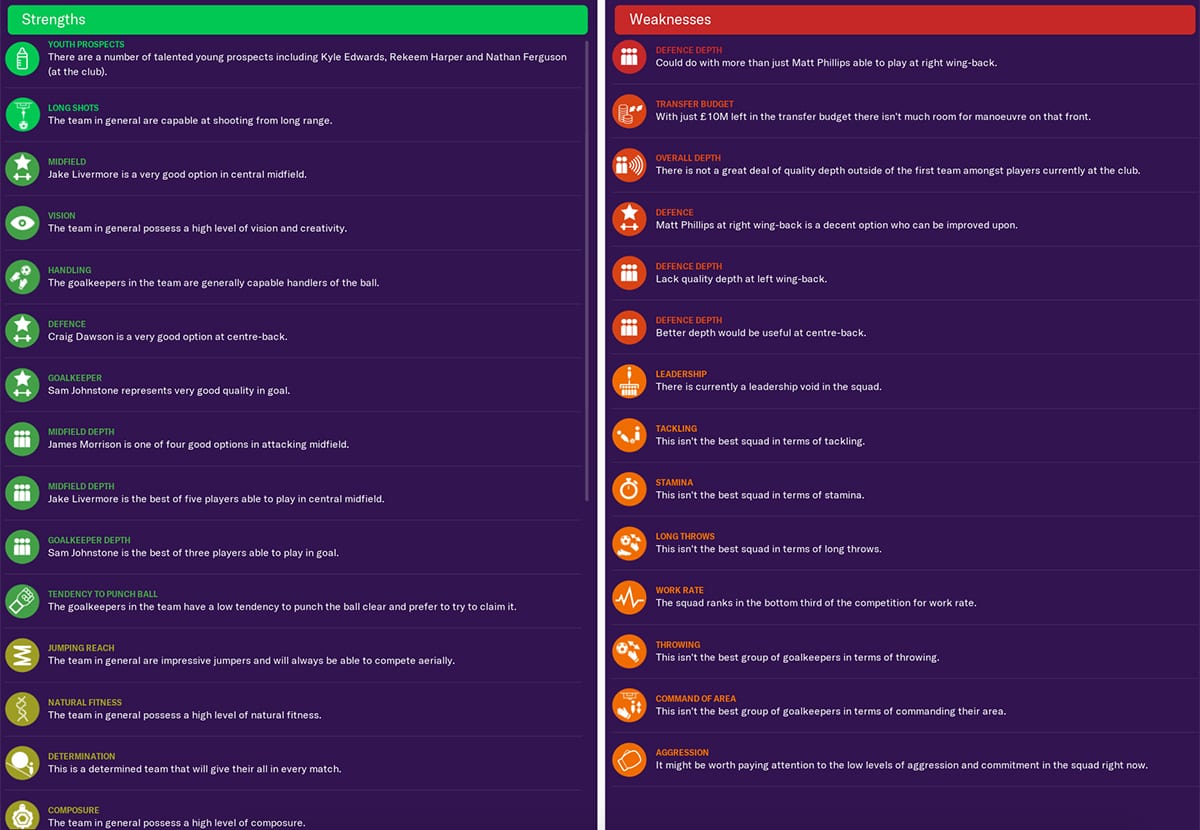 Armed with the Championship’s highest transfer budget and most of their squad in-tact following their relegation from the Premier League, West Brom are nicely positioned for a quick return. But the Championship is revolving door of unpredictability, whereby at least 10-12 teams can realistically aim for promotion at the start of the season. So rising to the top of the scrap heap won’t be easy.

Up top, Albion have firing power in Dwight Gayle and Jay Rodriguez, with enough experience behind them in the form of players like Jake Livermore, Kieran Gibbs, Chris Brunt and Gareth Barry, to mount a genuine title push.

La Liga is more open that it has been in a long time. Cristiano Ronaldo left Real Madrid, who are already onto the second manager before Christmas, having sacked Julen Lopetegui. Barcelona are still Barcelona, but not like we’ve previously come to know them, which means, the title is there for the taking, at least in FM19 terms.

Diego Costa, Antoine Griezmann, Diego Godin, Saul, Koke and Jan Oblak are some of Atletico’s more known faces, supported by strong players across the board like Thomas Lemar, Filipe Luis, Gelson Martins, providing more squad depth then they’ve had in recent years. No transfer budget will sting, but offloading a player you deem expendable shouldn’t be too difficult seeing as Atletico have 16 first-team players worth at least £10m. 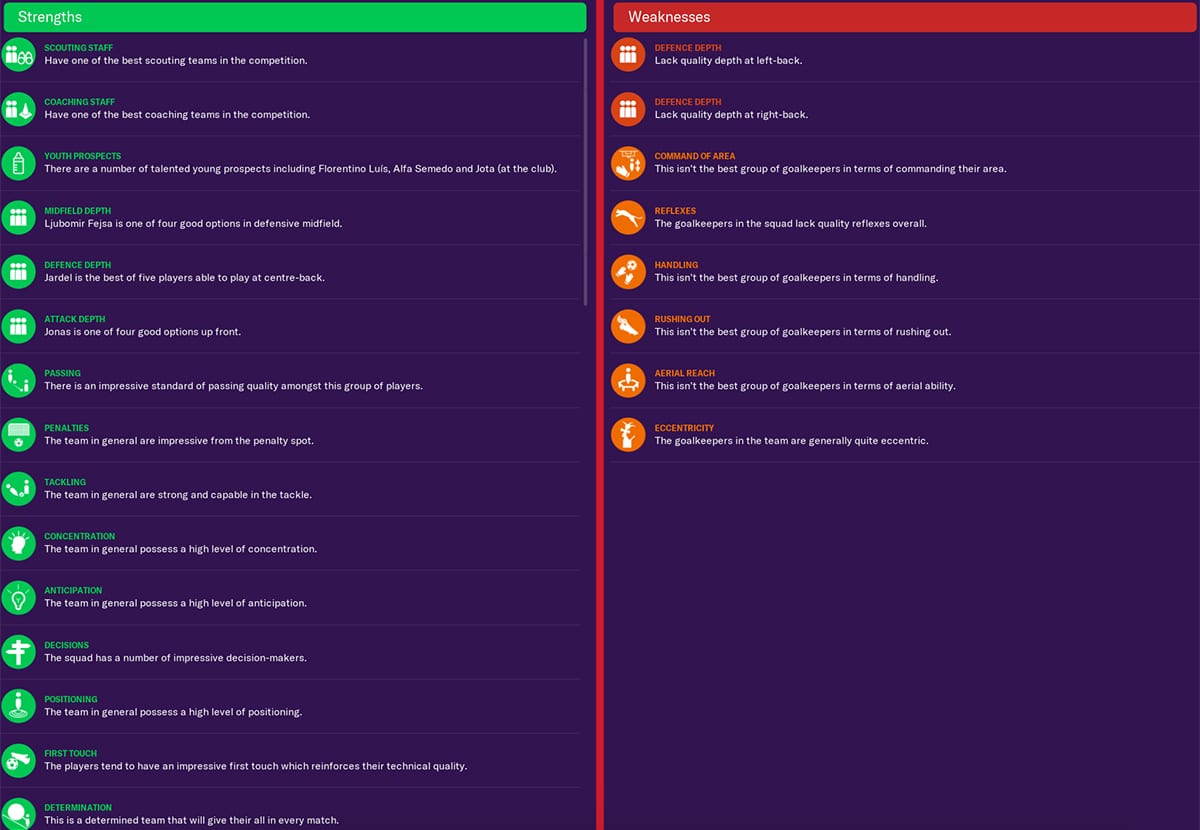 The Portuguese outfit have one of the best collection of young players of any side on FM19, so if you fancy taking on the task of developing young players who are likely to be poached by bigger clubs, you’ve arrived at your destination.

In Alex Grimaldo, Andrija Zivkovic, Gedson Fernandes and Luka Jovic (currently out on loan), you already have a few first-team ready youngsters to rely on from the get-g0 and European football on the highest stage in your first season. 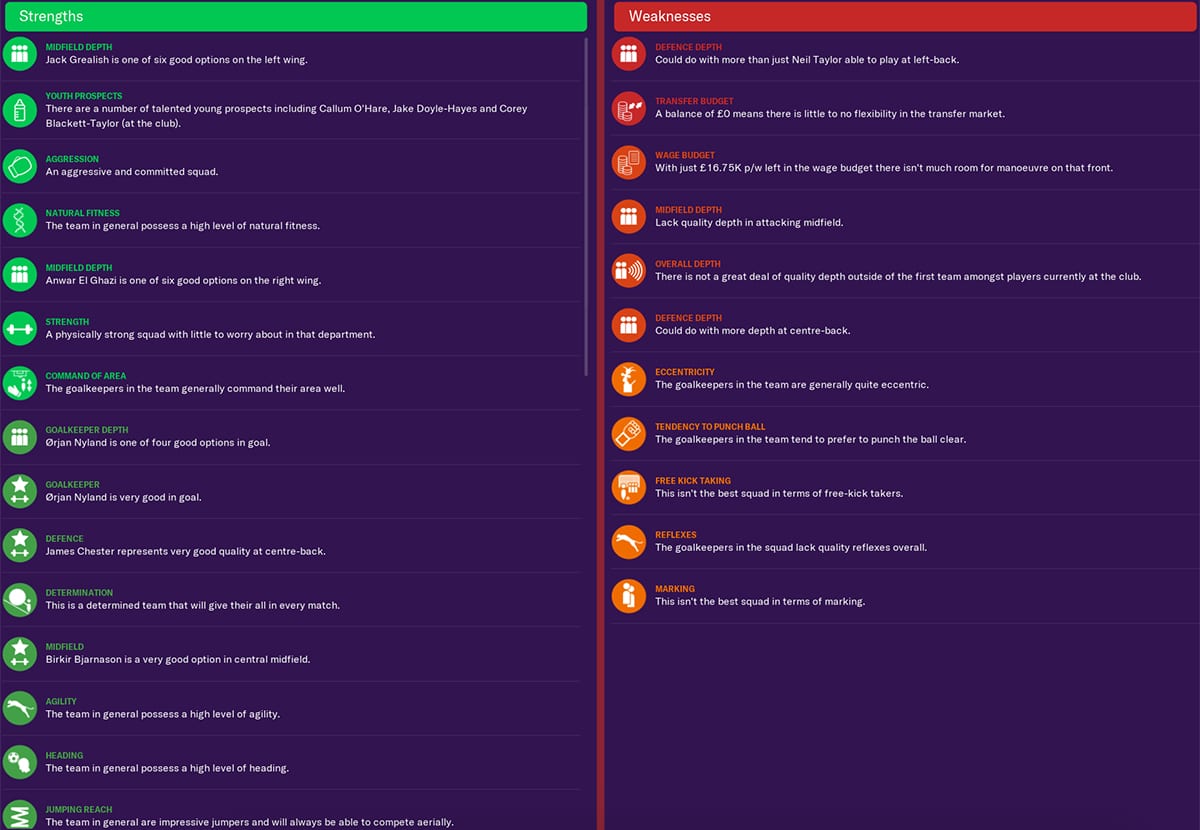 Villa are another interesting prospect in the hunt for a quick promotion, although, unlike rivals West Brom, they are strapped for cash, meaning new player recruits may prove tough without offloading others first.

Still, with one of Championship’s strongest side, they present the perfect conundrum in our Football Manager 2019 teams to manage rankings – strong squad, zero money. Despite the lack of starting finances, there is a reason they are predicted to finish third. The Villains begin the season armed with three astute loan signings in the form of Yannick Bolasie, Tammy Abraham and Axel Tuanzebe, adding to a squad that includes Jack Grealish, John McGinn and Mile Jedinak. 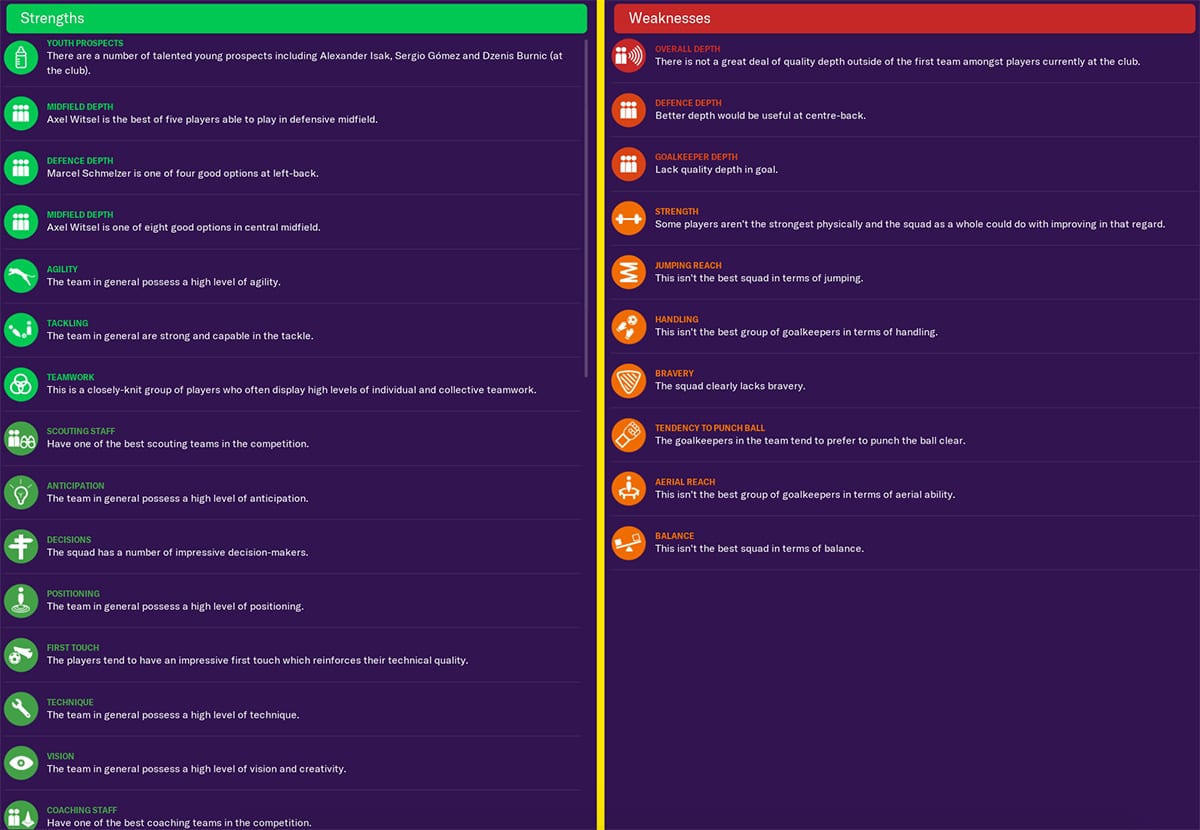 Dortmund are primed to mount for another title challenge after years of selling their best players. They are now loaded with exciting talent, including Jadon Sancho and Christian Pulisic, two of the most highly-coveted youngsters in world football, joining the ever-present Marco Reus.

Beyond their youthful exuberance, the home fans at the Westfalenstadion can also rely on a more experienced contingent offering meaningful contributions in a title push, such as Axel Witsel, Mario Gotze, Lukasz Piszczek and Shinji Kagawa. 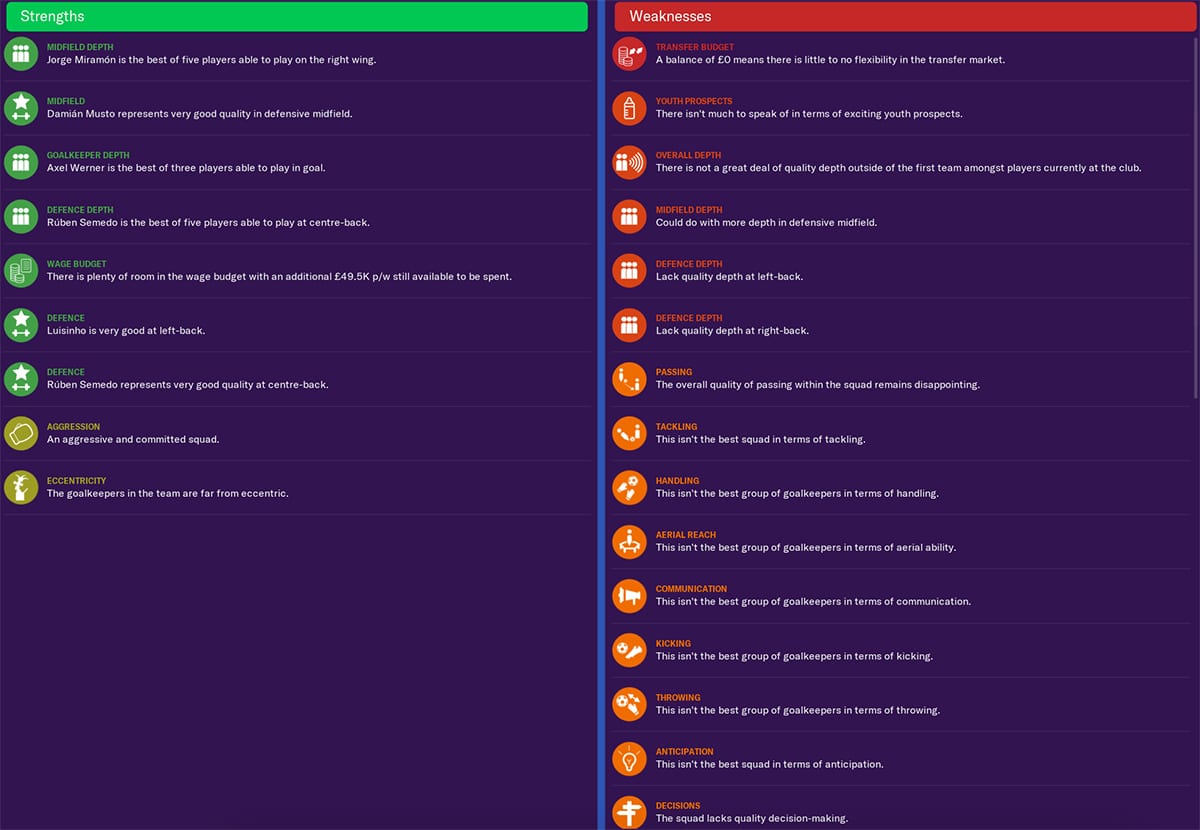 The small Spanish minnows gained promotion to Spain’s top league for the first-time in history. Nobody is giving them a chance to stay up, they have no transfer budget and begin the season with a big list of concerns they need to address in order to compete at the highest level.

One of the hardest challenges in our selection of Football Manager 2019 teams to manage. Fancy tackling the impossible? 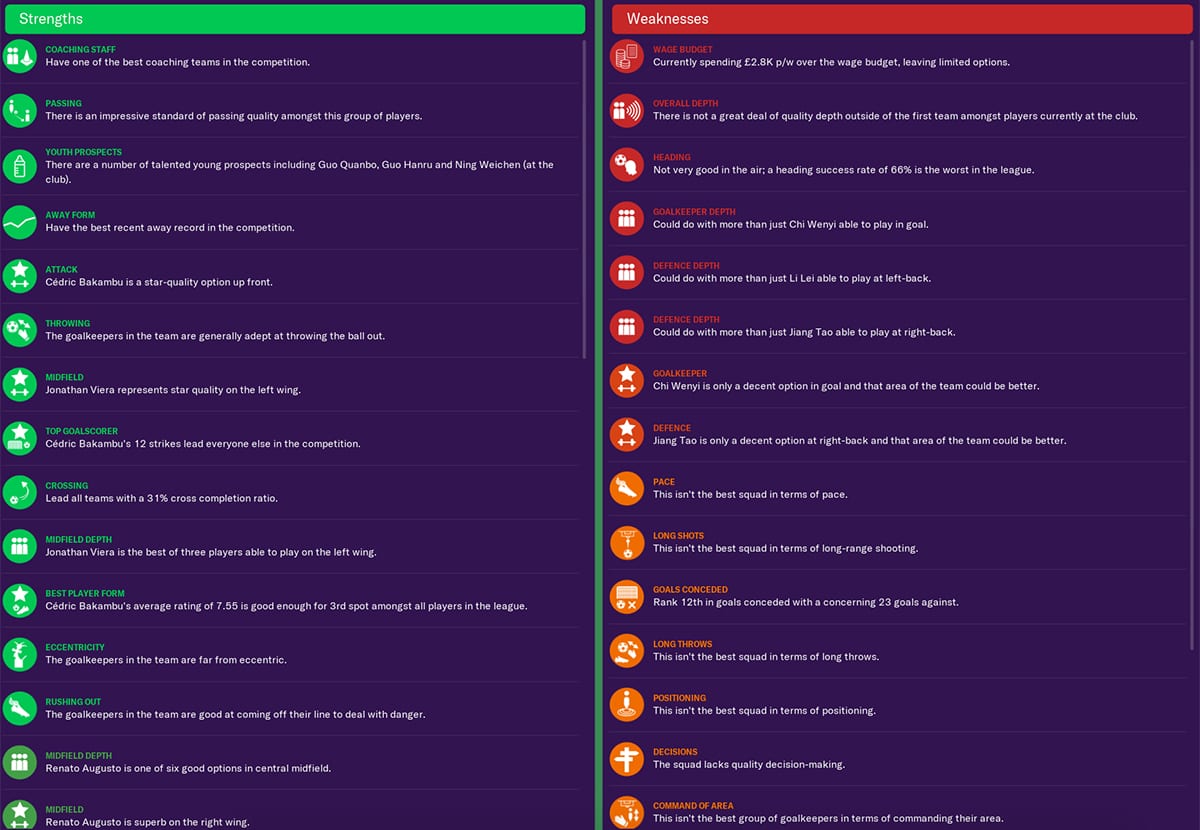 Lead by record-signing Cedric Bakumbu, as well as Renato Augusto and Jonathan Viera, Beijing begin their season with three foreign-designated players worth a combined £91.5m, allowing you to potentially sell someone for a tidy sum should you deem them expendable. They also have the highest budget of any Chinese Super League side.

The caveat here is that Guangzhou Evergrande are seven-time reigning champions and you can’t just chuck money at foreign players any more since the league introduced a rule stating that clubs must pay a 100% levy on any transfer over £5.15m, which is why Cedric Bakumbu cost £64m (£32m in transfer fees, £32m in tax). To navigate through that problem, you’ll have to sign domestic players and develop your youth academy from a limited talent pool. Are you up to the task? 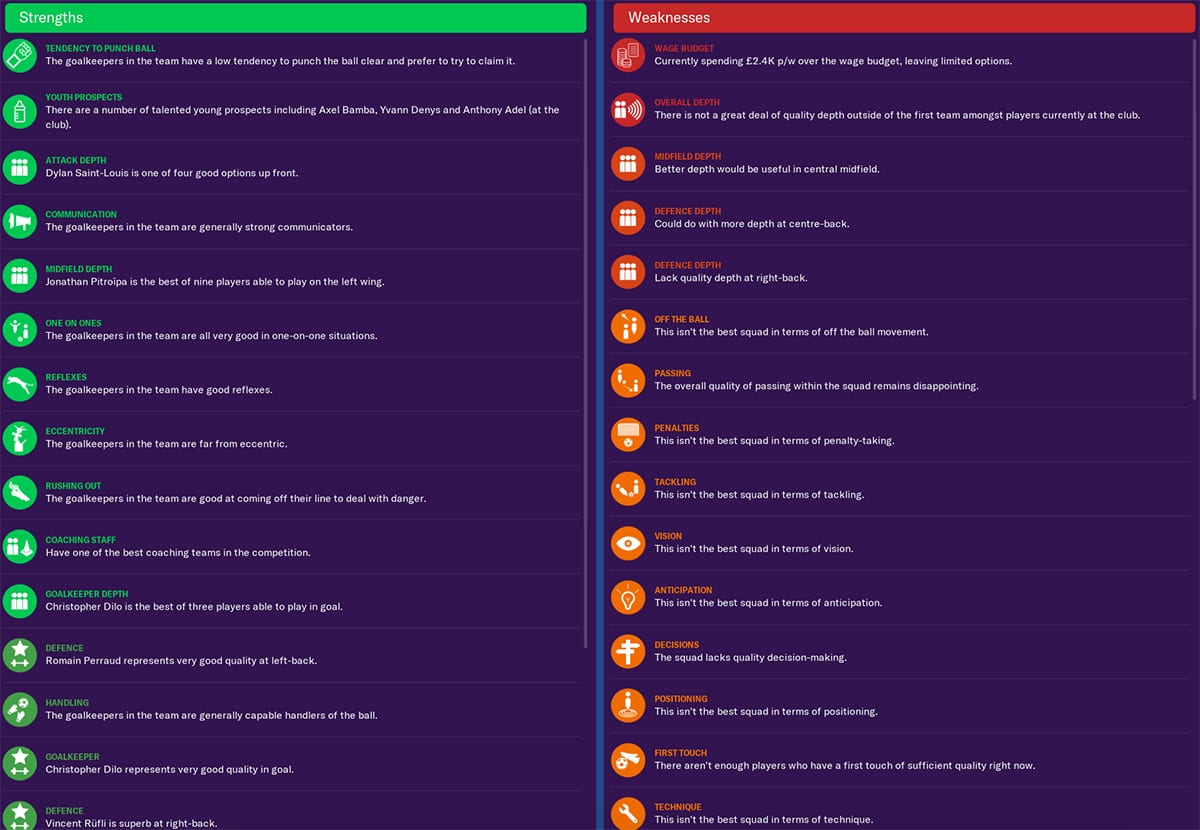 PSG are so far ahead of the rest of Ligue 1 that even teams in their same division struggle to compete, so what chance do their inter-city rivals have from France’s second division?

A minimal transfer budget and average squad only add fuel to that fire, but if you’re looking for a long-term, 10-season+ game save, look no further. 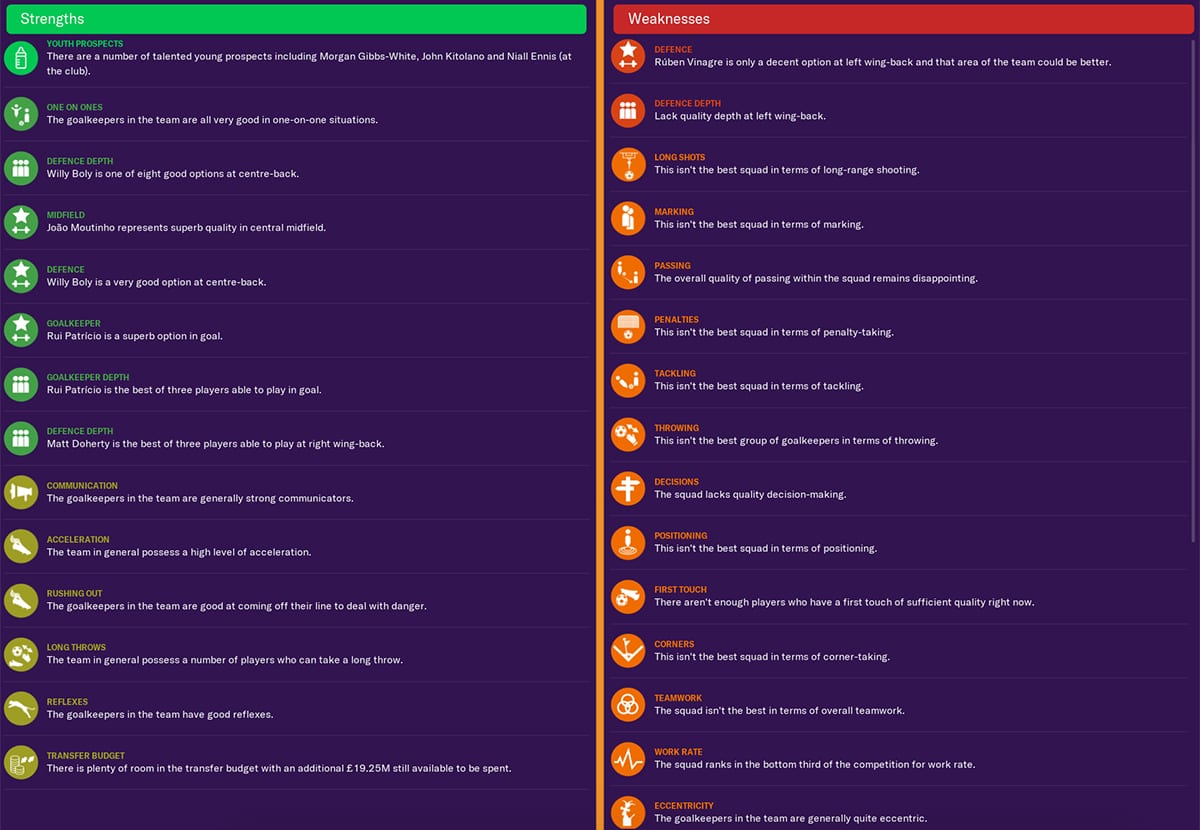 Manchester City 2.0, or Wolverhampton Wanderers, are back among England’s elite, only this time, loaded with talented European players and rich owners. Joao Moutinho, Rui Patricio and Ruben Neves offer solidarity in the middle, flanked by danger men like Adama Traore and Diogo Jota, with a few more decent role players on hand too.

Simply dodging relegation each year won’t suffice for a team with so much investment. Can you eventually reign supreme at the top of the summit? 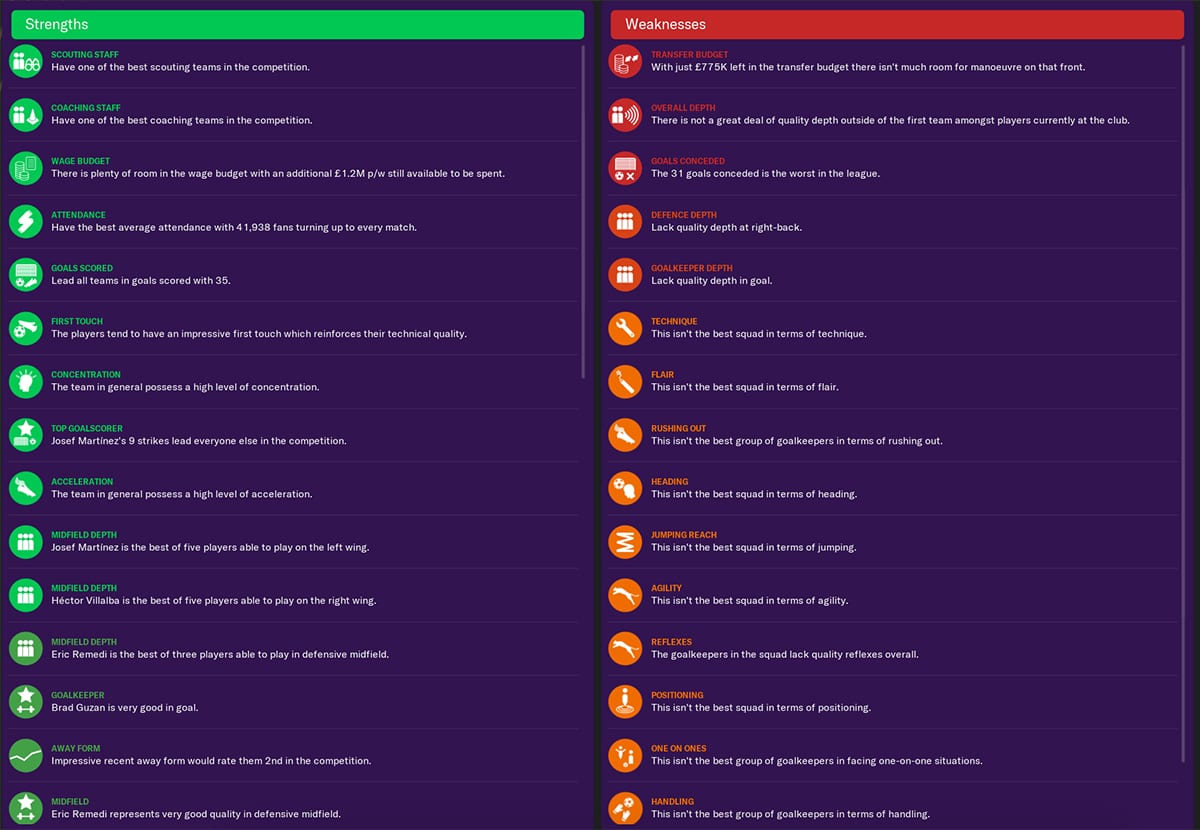 One of MLS’ newer side join their ever-expanding league with a loyal fan-base who regularly sell out the 42,500-capacity Mercedes Benz Stadium in Atlanta.

The actual squad isn’t exactly brimming with household names or world beaters, and with just one professional season under their belt, winning the double will be no walk in the park. Although, the squad have an interestingly large wage budget, which could be used to lure a European-based player in the twilight of their career seeking one last big pay cheque. 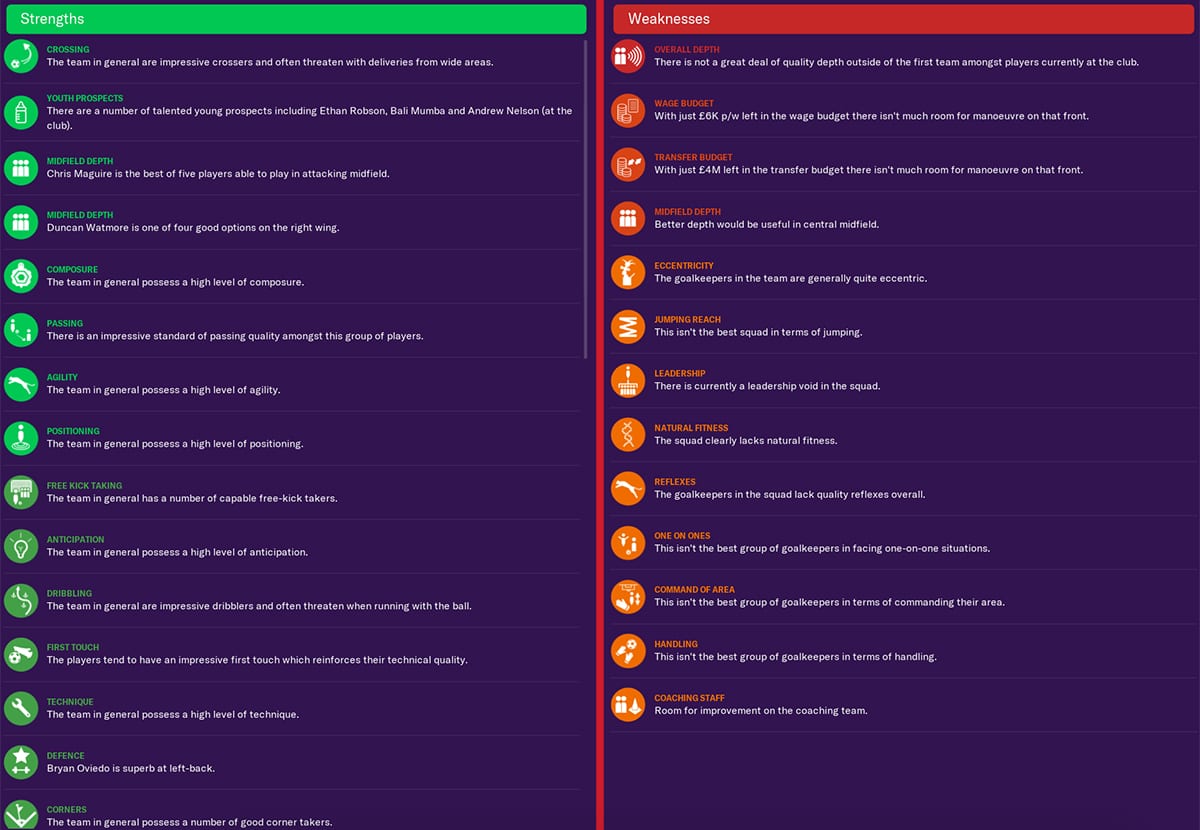 The Black Cats are a sinking ship in need of you to turn their fortunes around, a-la Norwich (2009-2011) and Southampton (2010-2012), by securing back-to-back promotions. You begin the season with £4m to spend and a few high players on high wages (e.g. Lee Cattermole on £30k/week), who if sold, would give you even more room to manoeuvre.

Climbing out of England’s third-tier shouldn’t be a problem. Securing an instant return to the Premier League (or ‘English Premier Division, to be politically correct), by means of two successive promotions, will prove a tougher challenge as any on this list Football Manager 2019 teams to manage list. 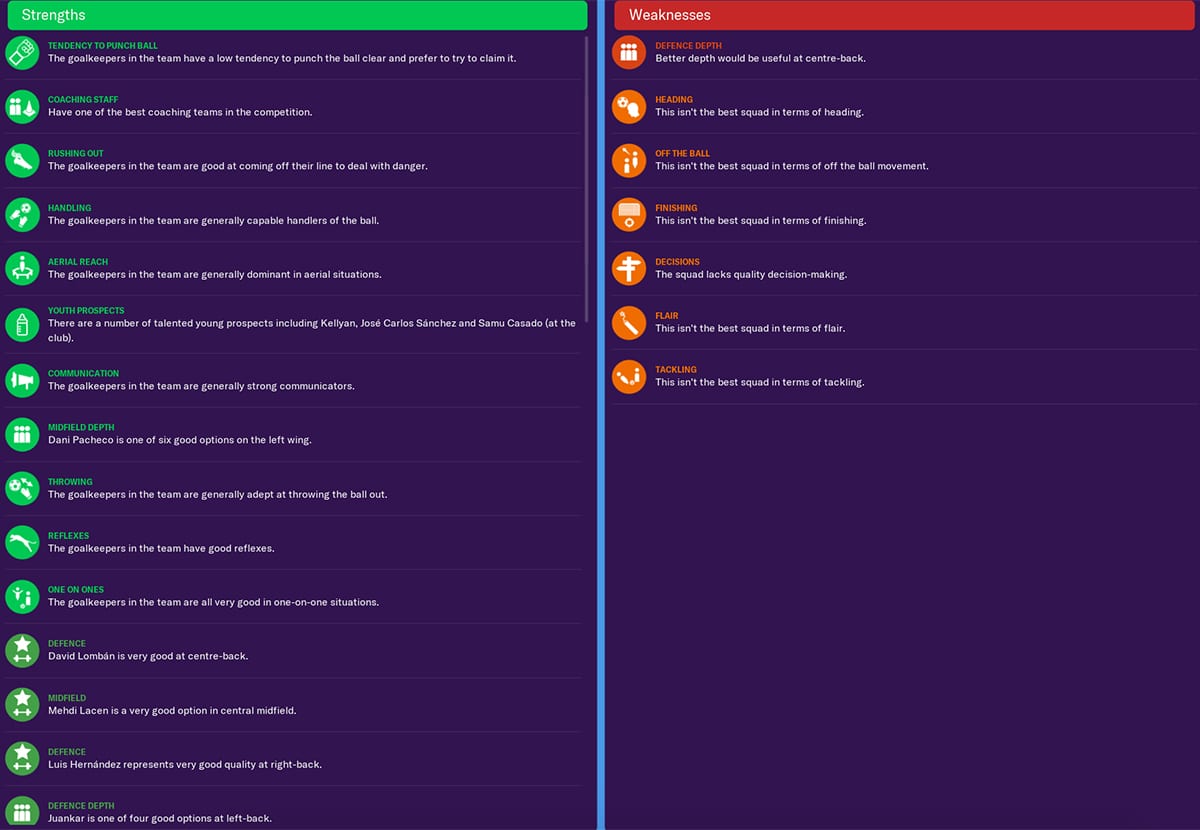 It wasn’t too long ago that Malaga were playing Champions League football, had Isco on their books and Manuel Pellegrini in their dugout. Now they find themselves in the Segunda Divison in need of a serious rebuild.

The club have a 28-000 capacity stadium, a decent-sized transfer budget and a fan-base expecting promotion in the first season.