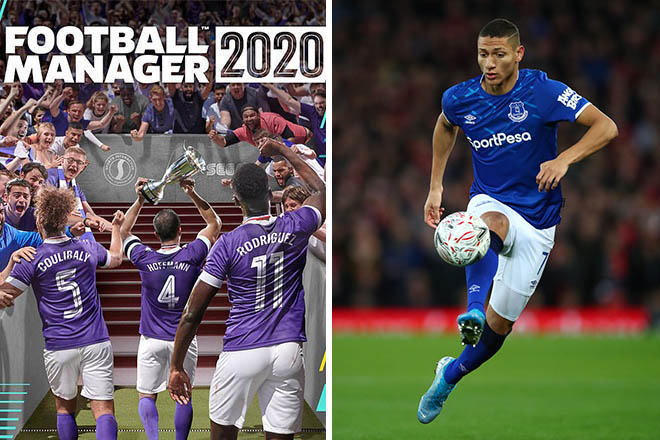 Football Manager 2020 Everton –  It’s been a somewhat rocky season for Everton so far after parting ways with Marco Silva back in December 2019. Since then, Carlo Ancelotti has taken charge at Goodison Park and now the Toffees appear to be a fringe outsider to secure European football next season.

With a strong core of Richarlison, Moise Kean, Lucas Digne and Gylif Sigurdsson, supported by tested veterans such as Seamus Coleman and Fabian Delph, Everton are well primed to take the next step. Although, that may be tough with a transfer budget of just £10m. 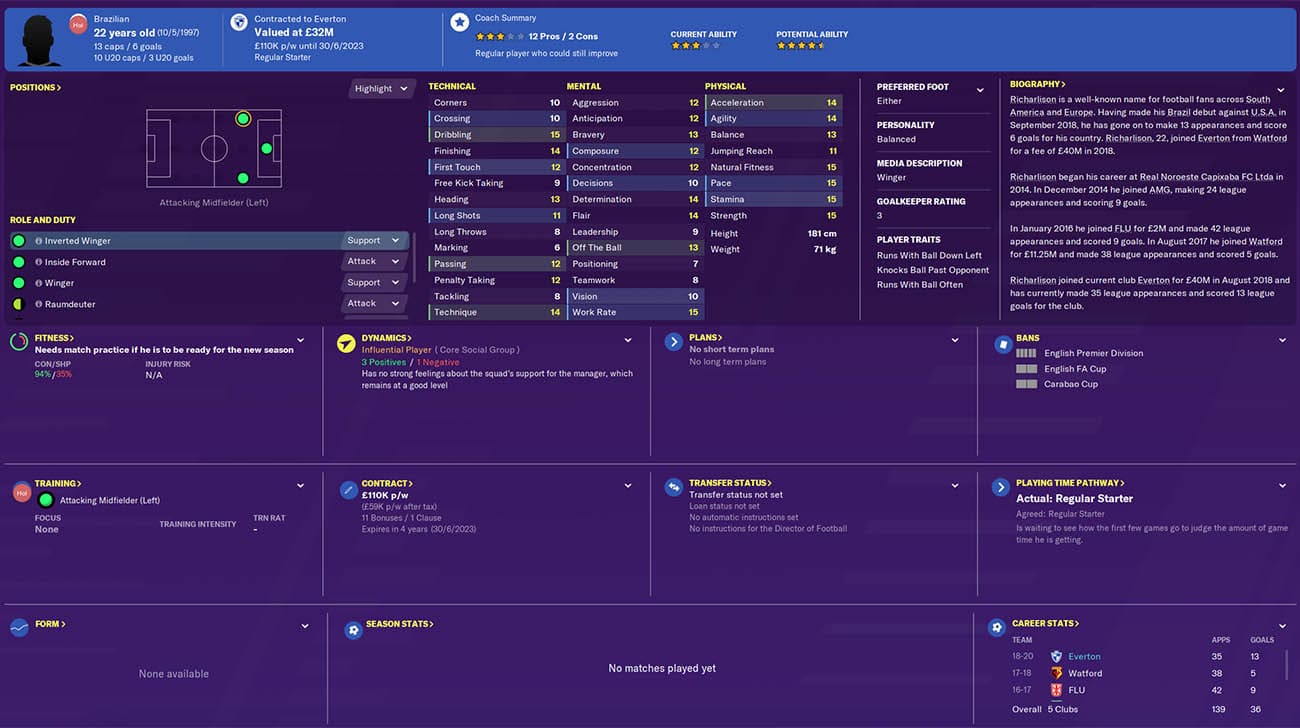 Barcelona was rumoured to have bid £85m for Richarlison this past transfer window, an indication of the challenges you could face in trying to keep hold of the former Watford man in FM20.

At just 22-years-old, Richarlison is arguably one of the best young building blocks of any Premier League player. Building a team around the high-flying forward should be one of your priorities, who possesses strong stats all-round across the board. 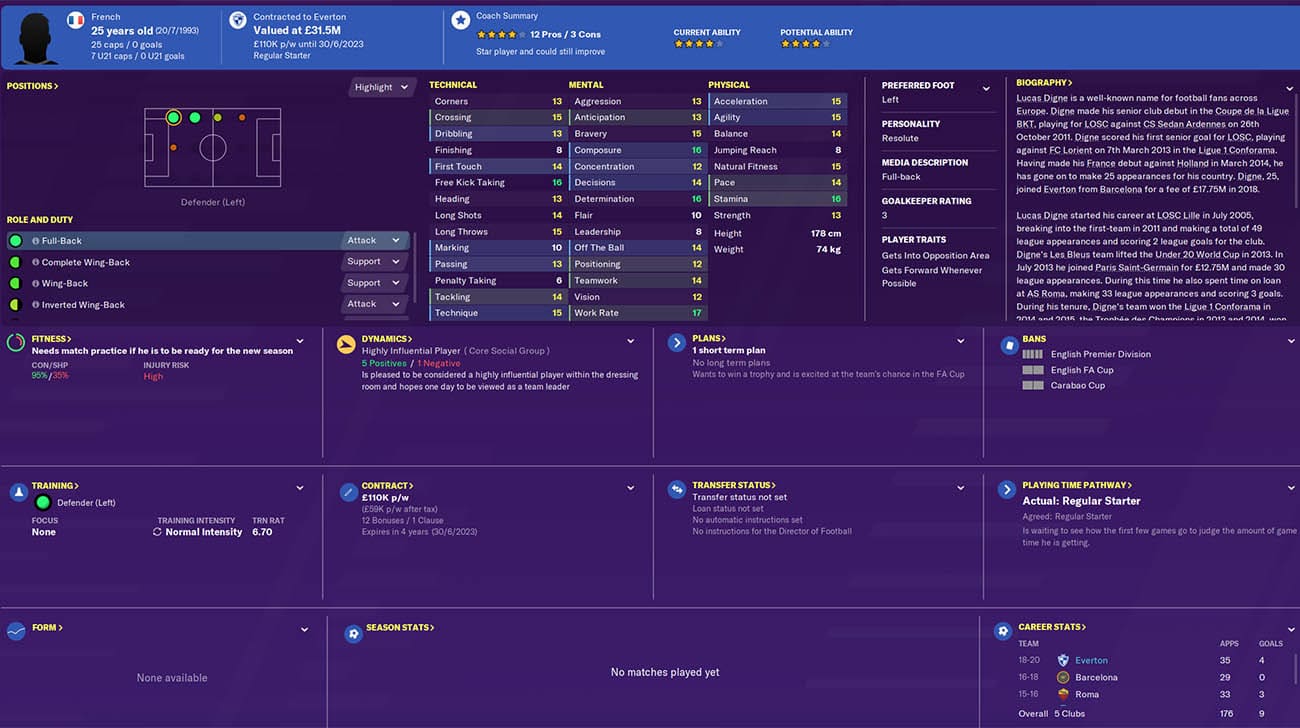 A member of the France side which fell short against Portugal in the final of the 2016 European Championship, the ex-Barcelona left-back stands at Everton as one of the club’s best players.

As well as being solid defensively, Digne is also a strong attacking threat and could form one half of a deadly left-handed duo alongside Moise Kean moving forward. As a bonus, you can assign him to be your free-kick taker and corner taker in good faith. 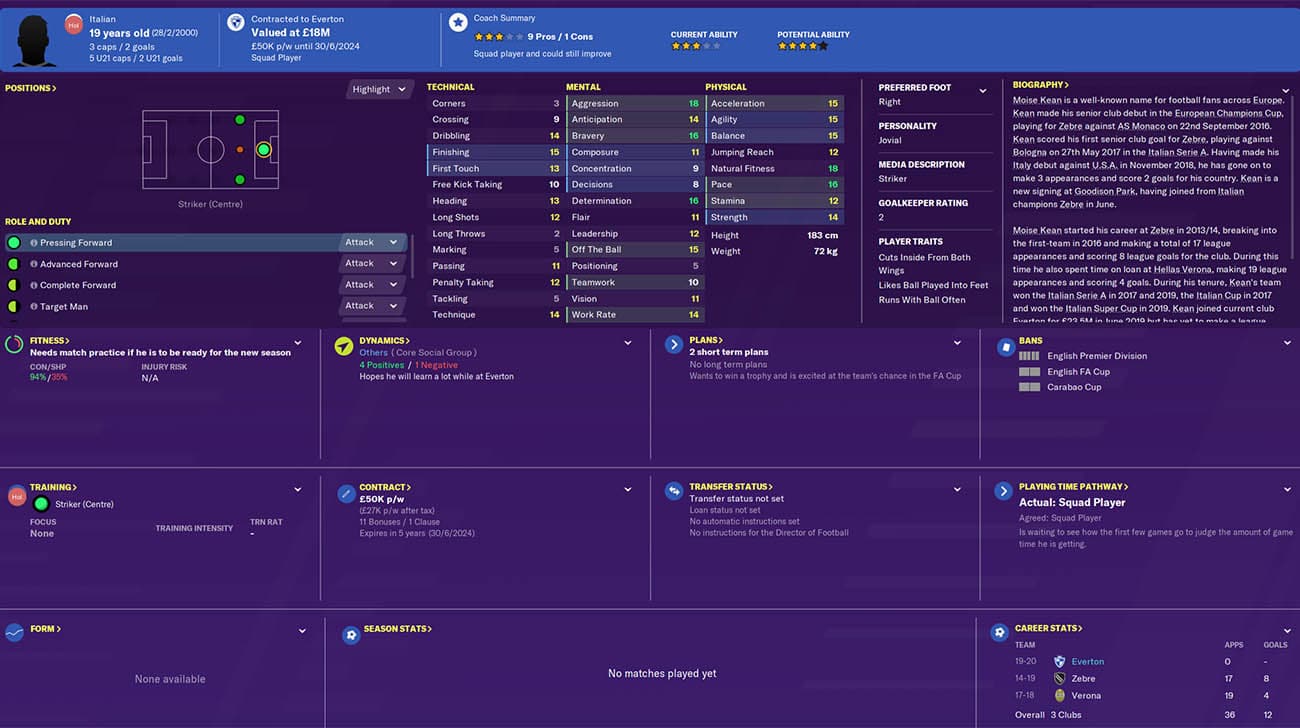 Fresh off scoring six league goals in a breakout season for Juventus last year, Kean earned himself a £27.5m move to Everton. Despite taking a while to find his feet in real life, in FM20, that shouldn’t be a worry.

Kean fits the bill of being both one of the club’s most exciting young prospects while also being one of the club’s best players right now. If you only play with one striker, it may be an idea to start Kean ahead of Dominic Calvert-Lewin. 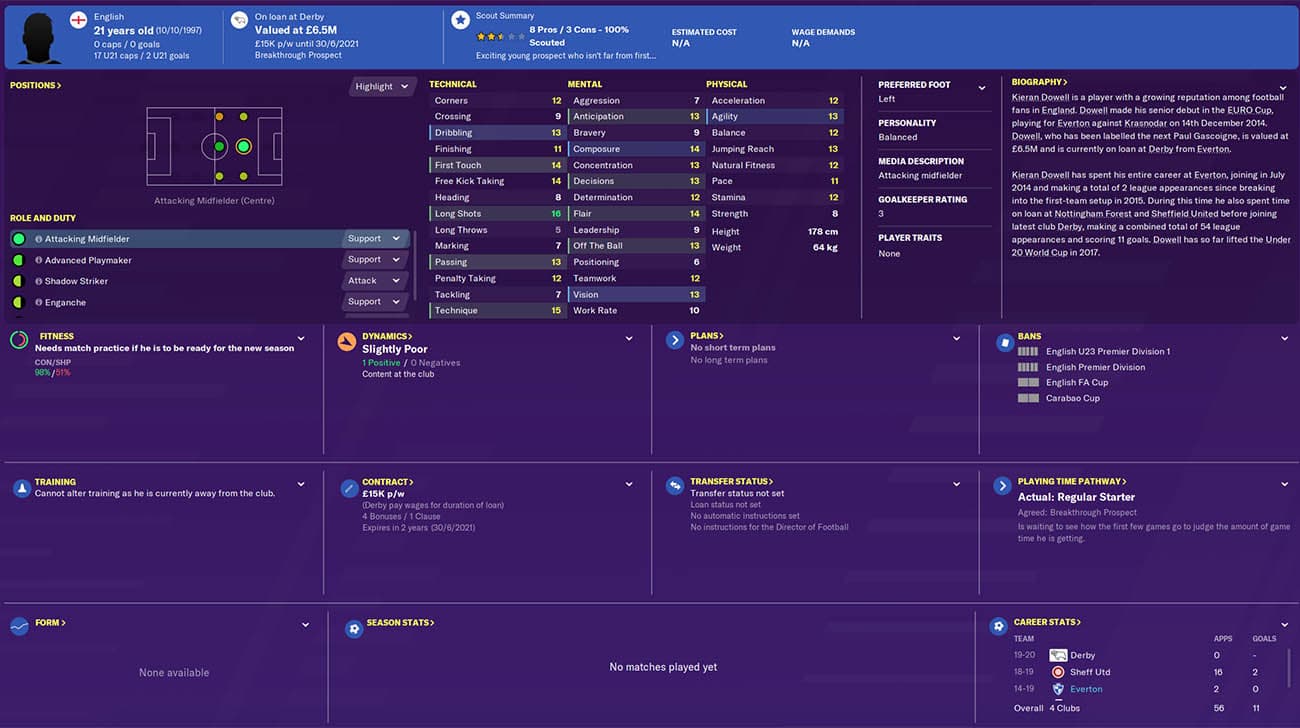 Aside from Kean and Richarlison, the Toffees is a little light on five-star young prospects, but in Kieran Dowell, you could have your number 10 of the future.

Currently out on loan at Derby, the young English attacking midfielder has an eye for goal and decent technical ability which could make him a strong fit as a squad member from 2020/2021 onwards. 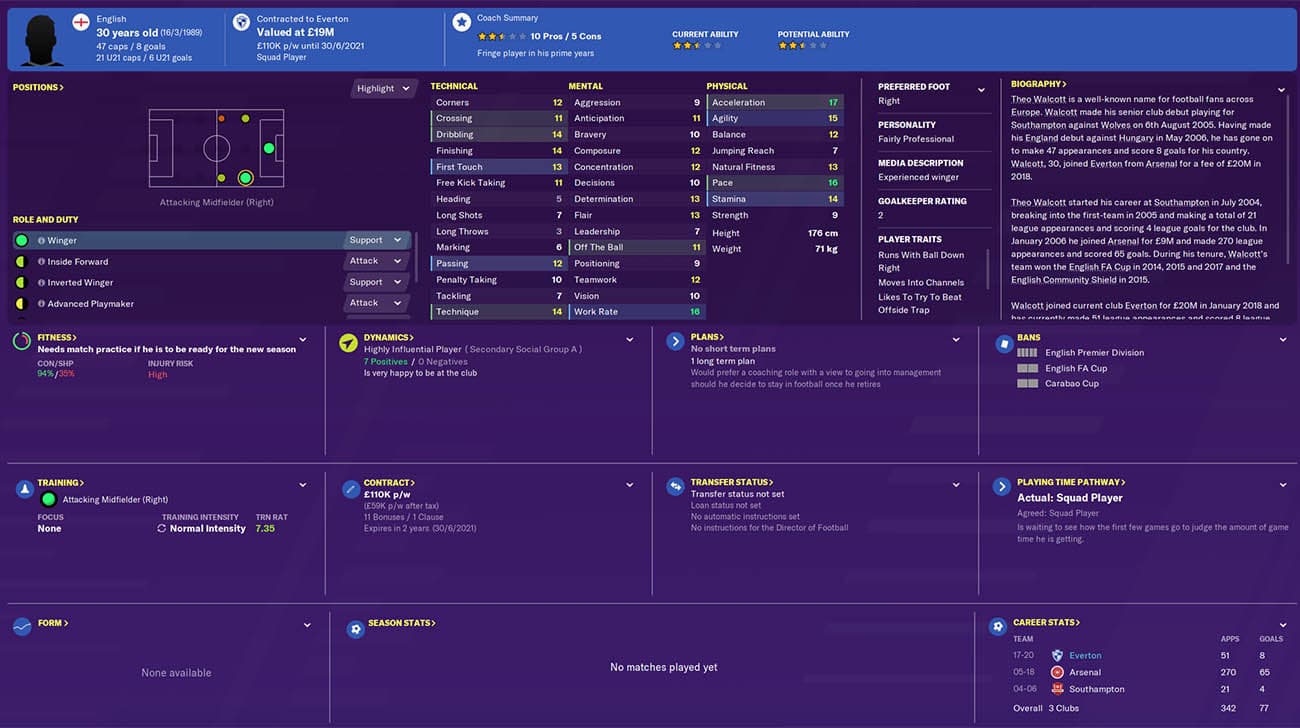 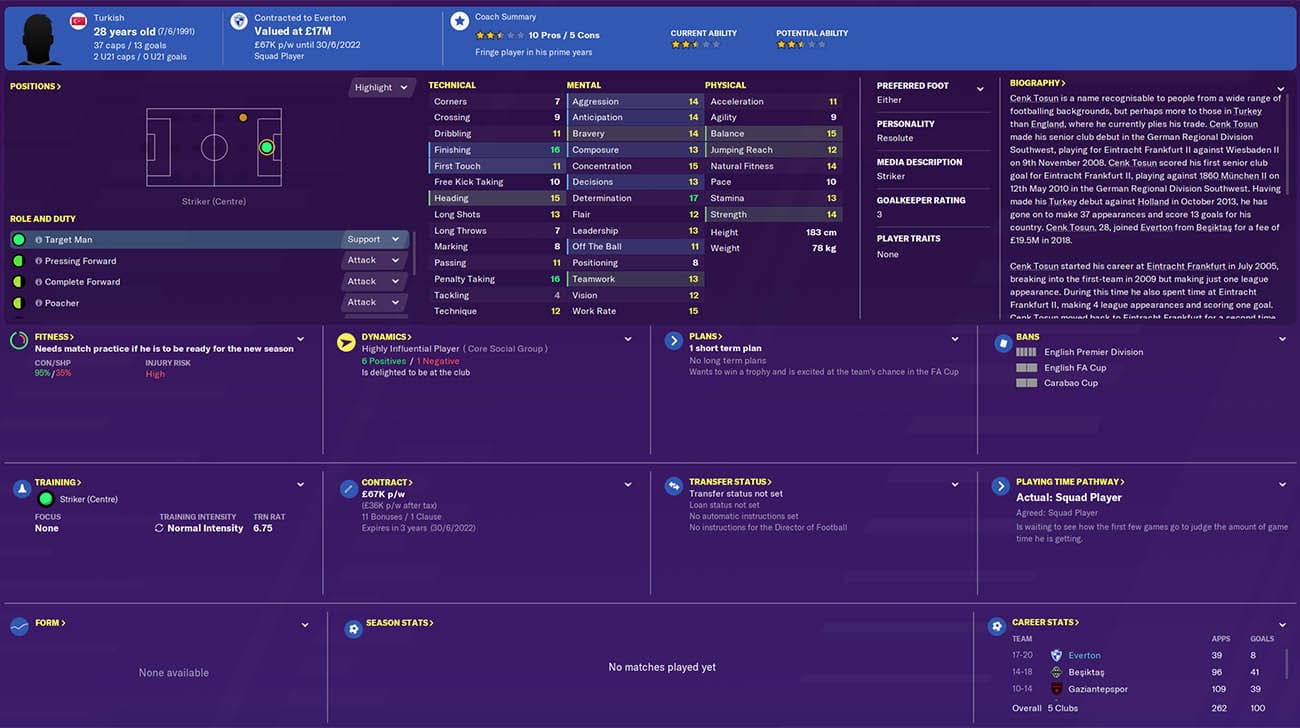 After you’ve read up our Football Manager 2020 Everton team guide, check out our list of the most valuable players at every position on FM20 by clicking here.