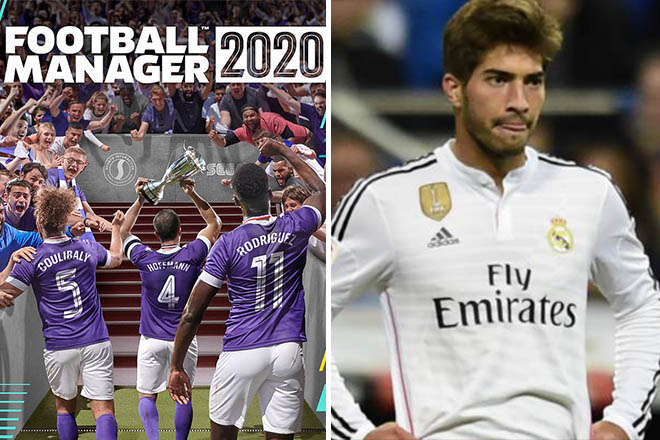 Despite his lofty wage demands, he is a rare example of a free agent who could remain with your team for years to come, rather than just being a stop-gap option. To ensure the Brazilian appears in your database, you must select the Brazilian National First Division as a playable league at the start of any game save.

Elsewhere, there is experience aplenty. The likes of Hatem Ben Arfa, Wilfried Bony and have combined for over 200 Premier League appearances between them, while Fabio Coentrao would arrive at your club a Champions League winner, having won the trophy in 2014 with Los Blancos.

As well as listing each players age, best position and estimated wage demands, we’ve also included every player’s five best attributes to give you an idea of their playing style.

In no particular order, here is our list of the 20 best Football Manager 2020 free transfers: 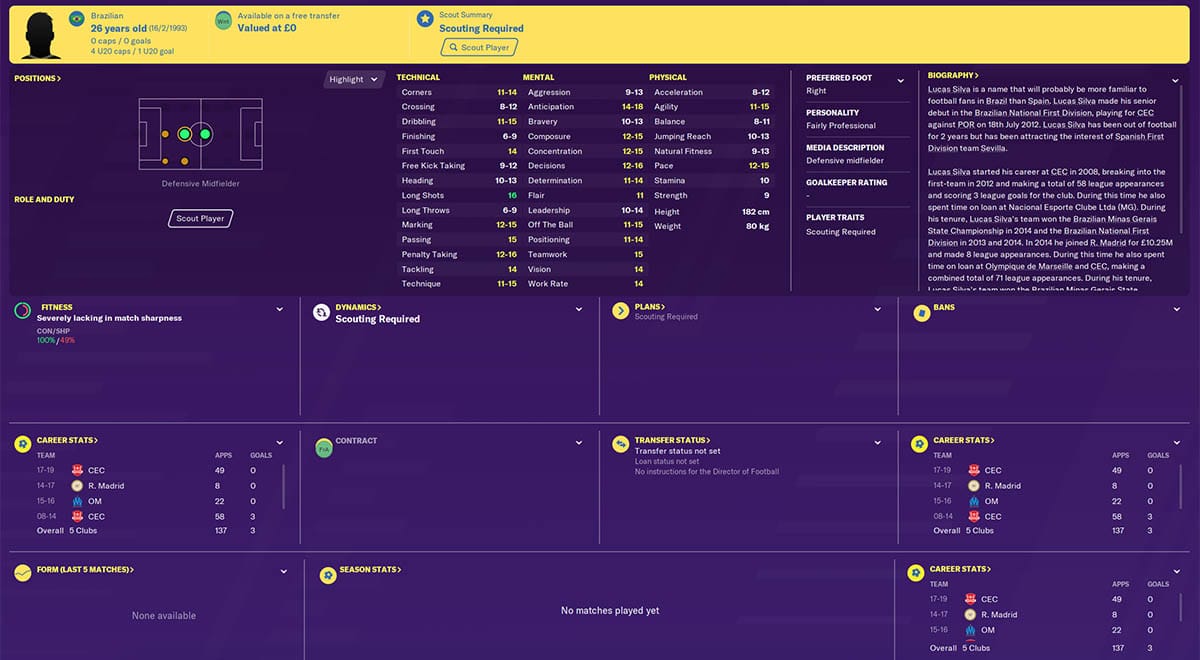 It’s not often a former Real Madrid player in their prime finds themselves without a club, so snap up the Brazilian before he inevitably goes. He is by far the most expensive on this list in terms of salary but in Lucas Silva, you could have a squad member for the next 5-10 years. 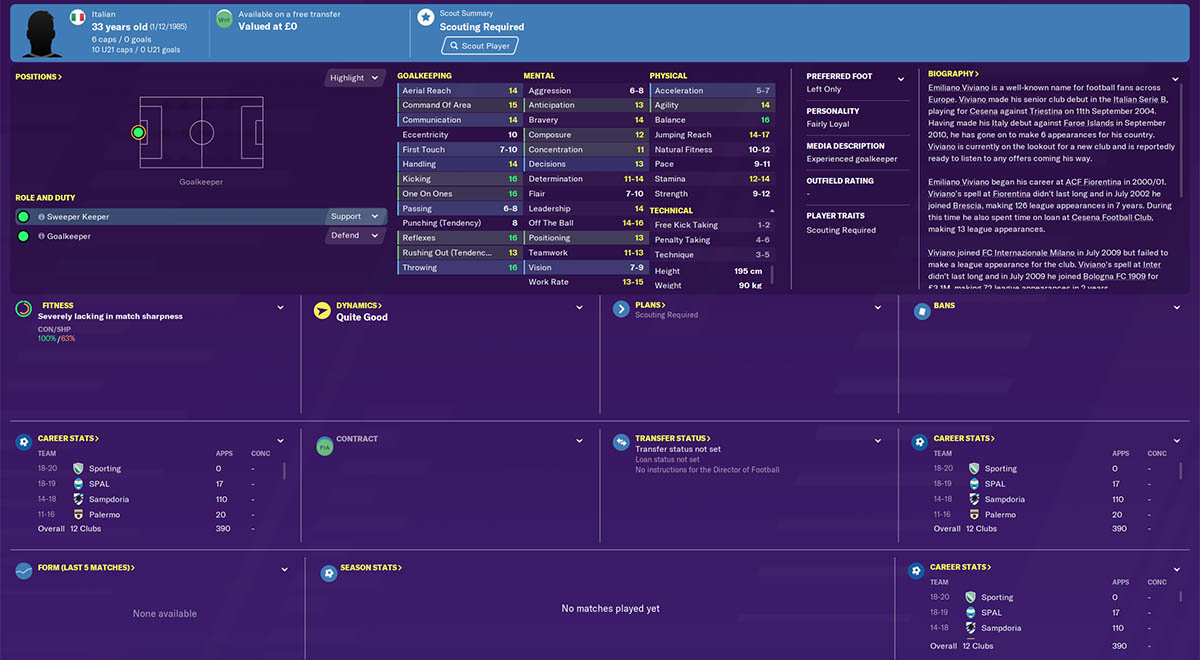 Arguably the best keeper on this list, Viviano is a player you need to sign sooner rather than later to prevent him from signing elsewhere. And it’s not hard to see why. The one-time Arsenal loanee has plenty of elite attributes and over 350 games worth of experience under his belt. 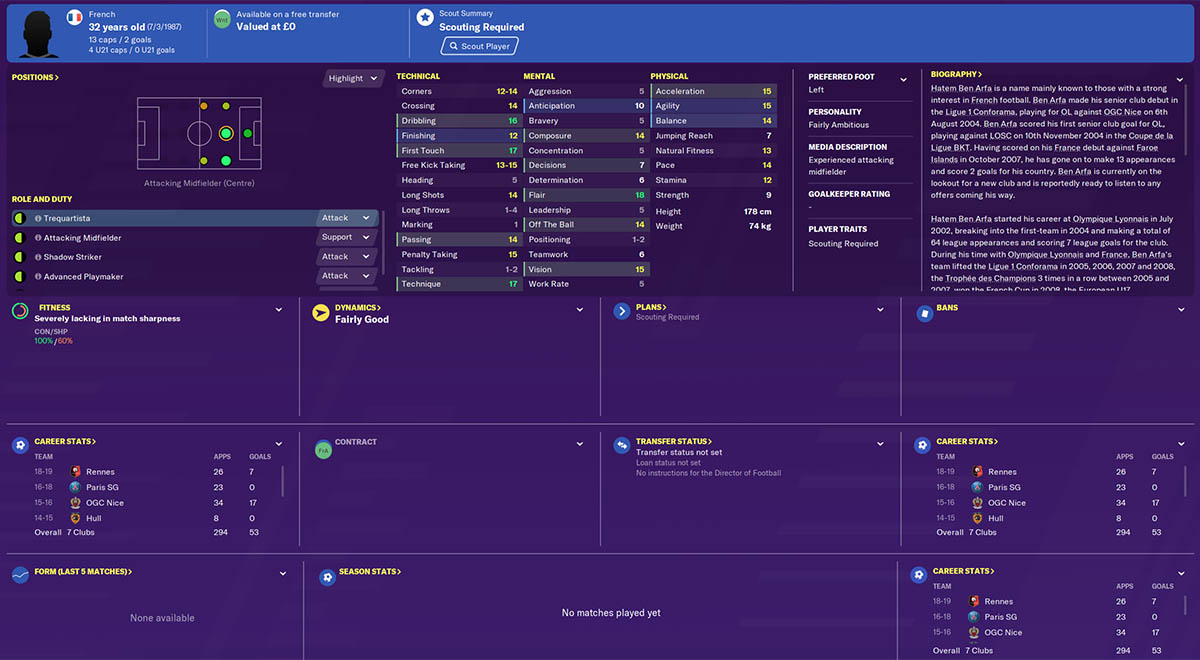 The well-travelled French playmaker finds himself on the Football Manager 2020 free transfer list after spending the last four years in Ligue 1 with PSG and Rennes. For a side short on attacking midfielders, the former Newcastle star flair and technique in abundance. 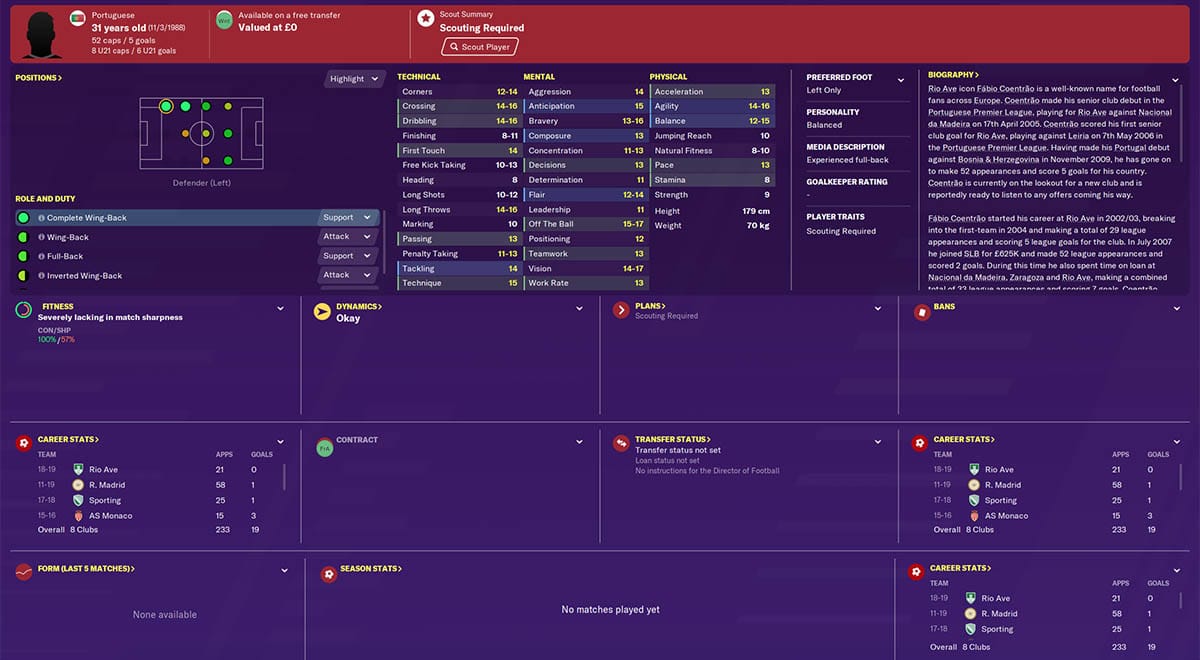 The two-time Champions League winner is another expensive Football Manager 2020 free transfer, but the outlay could be worth it for a mid-table side in need of a new starting left-back. At 31, Coentrao would arrive at your club a solid player but also someone who could mentor youngsters, having won more than 10 trophies with Real Madrid and Benfica throughout his decorated career. 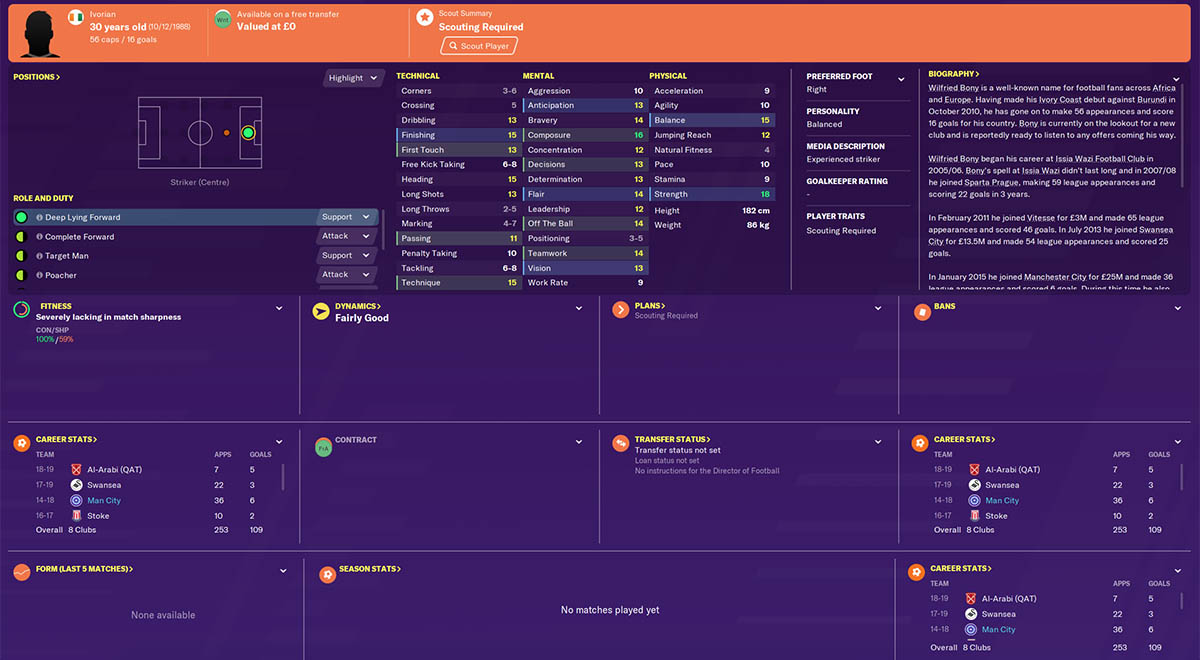 Over £50m has been spent on Wilfried Bony in transfer fees in his career but he finds himself searching for a new team while still being in his prime. Things haven’t quite panned out for the Ivory Coast international since his £25m switch to Man City in 2014, but with strong finishing, heading and technique stats, surely he’s worth a punt for most Championship sides.

Even at 34, Behrami can still be a valuable contributor for most sides. At bigger clubs, he could be a squad player but for teams in need of cheap reinforcements, the Switzerland international possesses enough physical ability to stave off father time and still be productive. 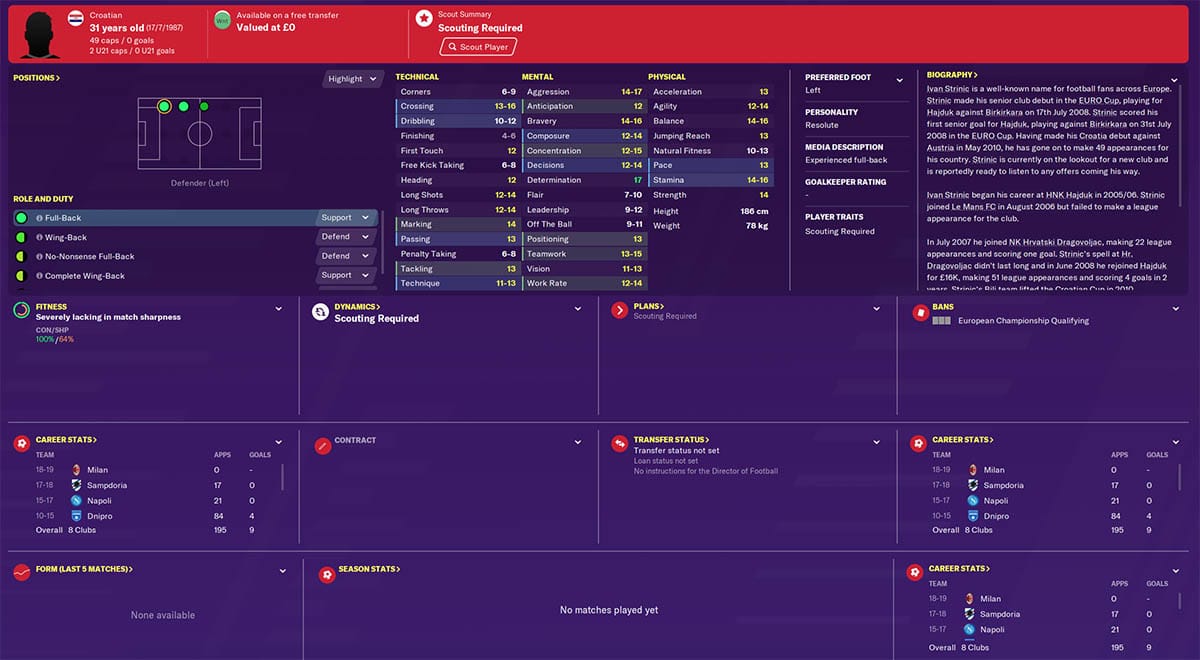 Strinic is the only player on this list who’s started in a World Cup final. The Croatian international and Serie A journeyman has displayed an ability to compete at the highest level, but after three short stints at Napoli, Sampdoria and AC Milan, finds himself with a point to prove in European football after spending most of his career playing in Ukraine and Croatia.

An AC Milan regular for the last decade, Abate is a pacy defender (for his age) and suitable option for bottom-half Premier League sides or most teams in the Championship. A lot of free agents on this list are ageing but the Italian right-back would serve as a cheap and reliable starter for at least one season. 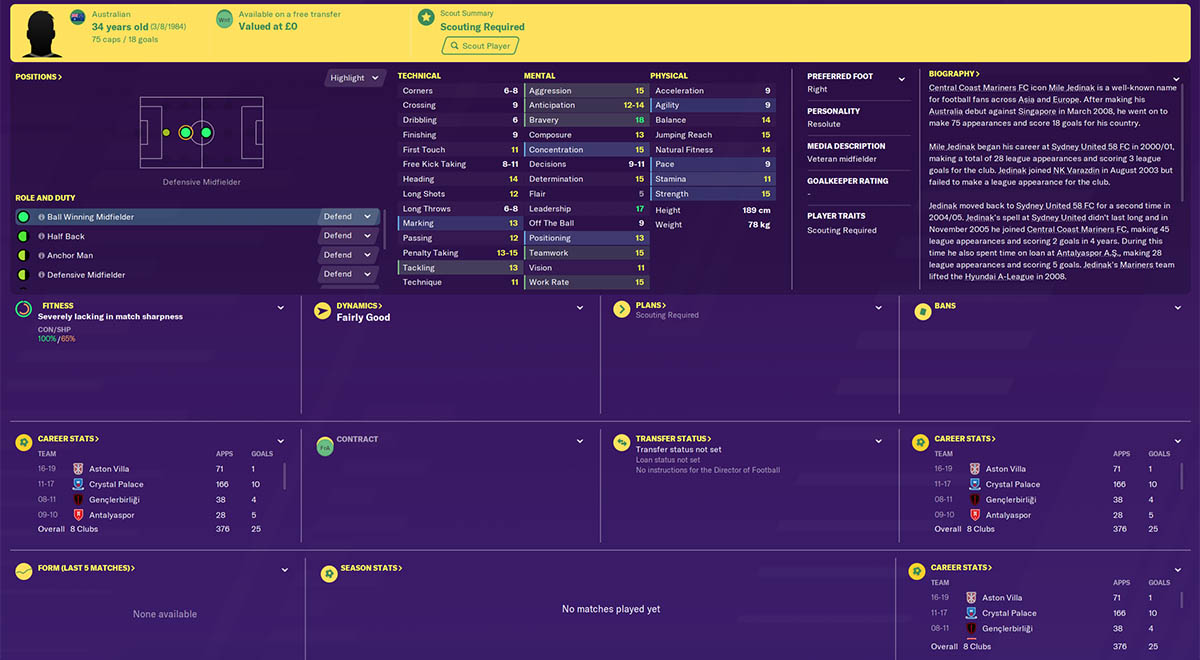 The 34-year-old Crystal Palace hero finds himself without a club after three years at Aston Villa, who released him this past summer in favour of fresher faces for their return to the Premier League. The Australian would arrive with 100 Premier League appearances under his belt to go along with 75 international caps, making him a solid bet for many Championship clubs in need of a defensive midfielder. 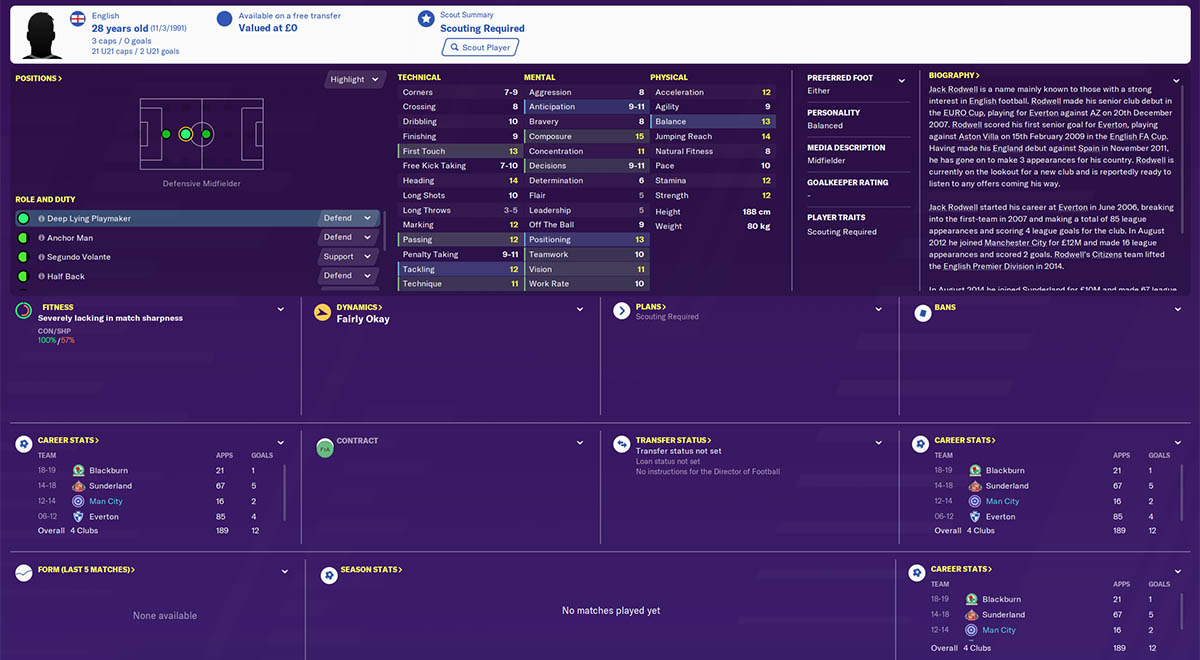 Once touted as an England regular for years to come, things haven’t quite gone to plan for the former Everton youngster. Despite his decline, Rodwell, who was linked with a surprise move to Roma midway through the 2019-20 season, can become a solid option for most League One sides. There aren’t too many free agents with over 100 Premier League appearances and a few England caps.

After you’ve finished reading up on the best Football Manager 2020 free transfers, click here to find out the best teams to manage in FM20.