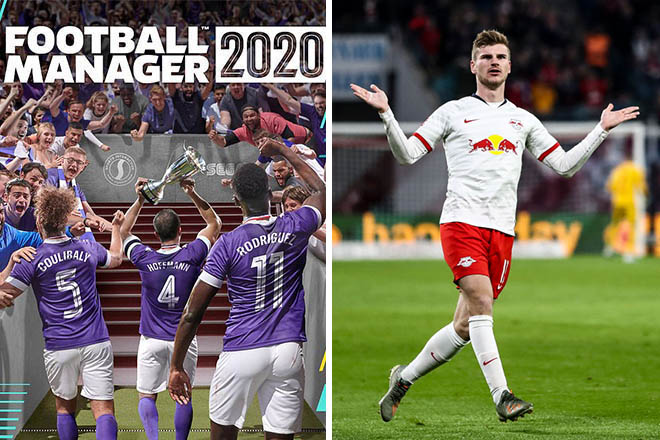 Football Manager 2020 RB Leipzig – The club is on the cusp of winning their inaugural Bundesliga title. Are you the manager to help them over the hump?

RB Leipzig only formed in 2009 but they’ve already made their mark on German football, finishing as runners up in 2016-17 and keeping the title race interesting in the past few seasons. With Bayern seemingly in transition, now is as good as time as ever to secure their debut league triumph. Are you the manager to help them get over the hump? 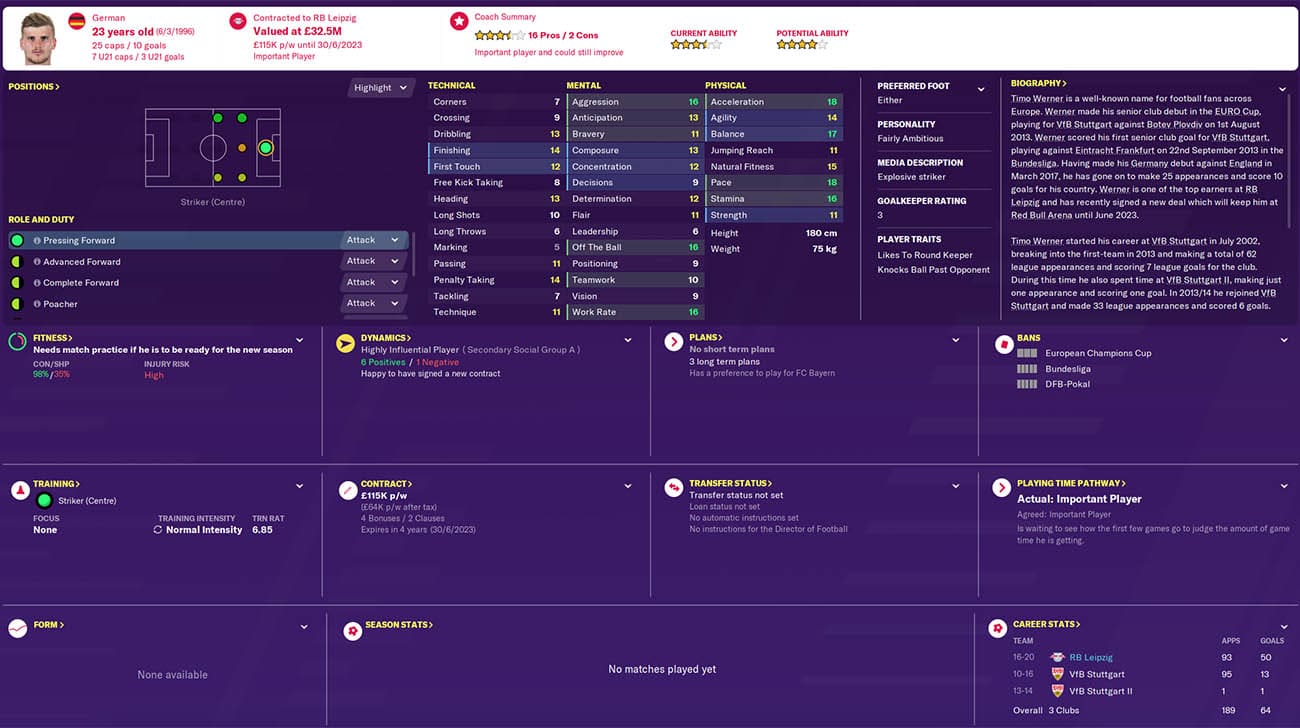 The hard-working, industrious forward has attracted the attention of Europe’s best thanks to his prolific form. Liverpool and Chelsea have been both been linked, while Bayern Munich always seems to have an interest in signing the best German players available.

All of this means the pressure to perform in order to appease Werner and keep him at the club, is huge from day one. In most games, he usually moves club within a season or two, so you may have to win a trophy of some kind in your first season to keep him around. 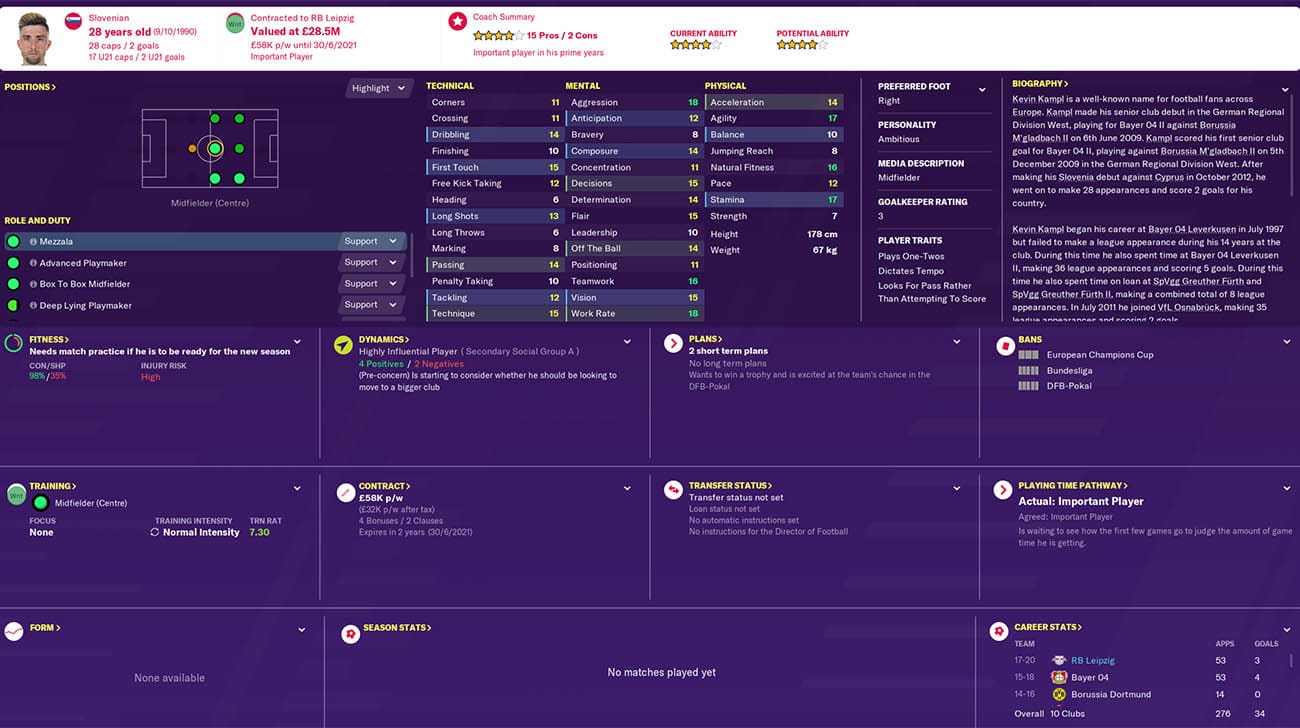 With over 100 league appearances under his belt and experience playing for Bayer Leverkusen and Borussia Dortmund, two teams also who are also vying to win the title most seasons, Kampl brings experience to an otherwise youthful RB Leipzig side.

The 28-year-old is out of contract in 2021, so it would be smart to get him tied down to a longer deal early on if you see him as a big part of your future. 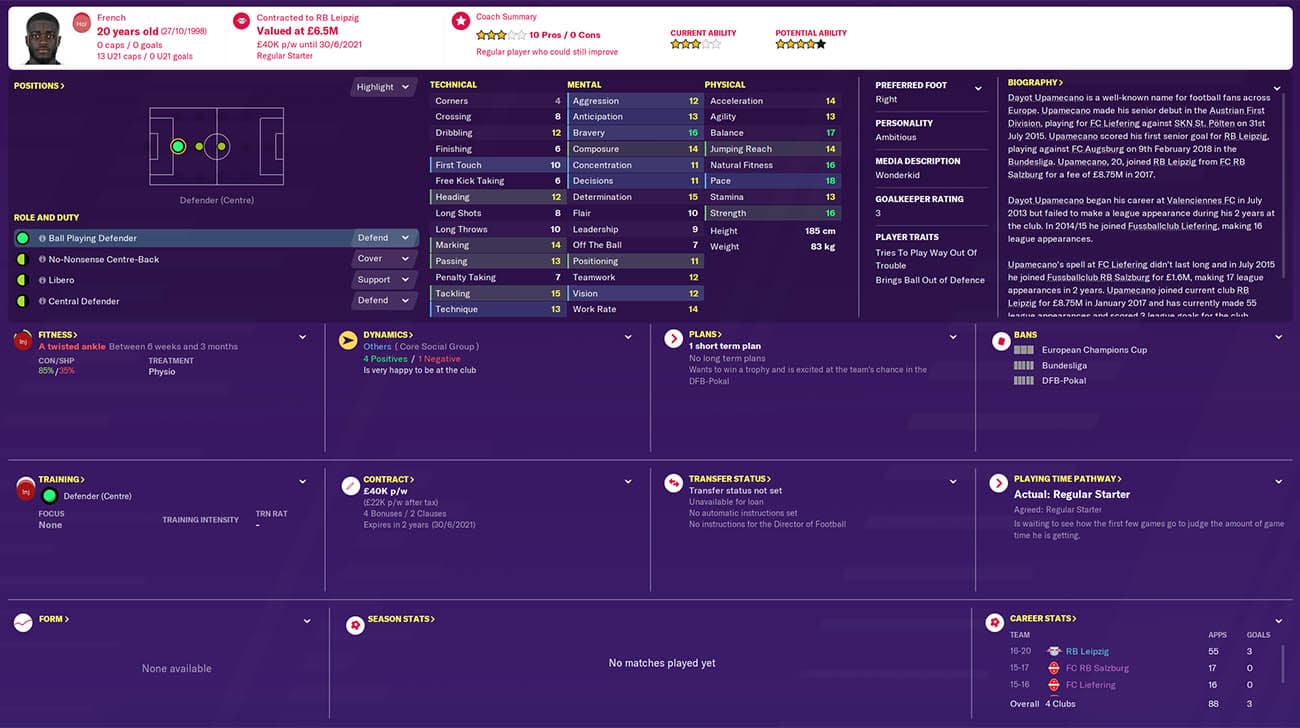 Reports have surfaced which suggest that Upamecano has a release clause of £86m. In FM20, the clause stands at £86m, a benefit for RB Leipzig as it means you can demand close to that figure should anyone try to sign him.

The young French defender has been linked with a move to Arsenal and is widely viewed as one of the best young defenders in Europe. If you are to win your first league title with RB Leipzig, it’s likely that Upamecano will be a large reason why that was possible. 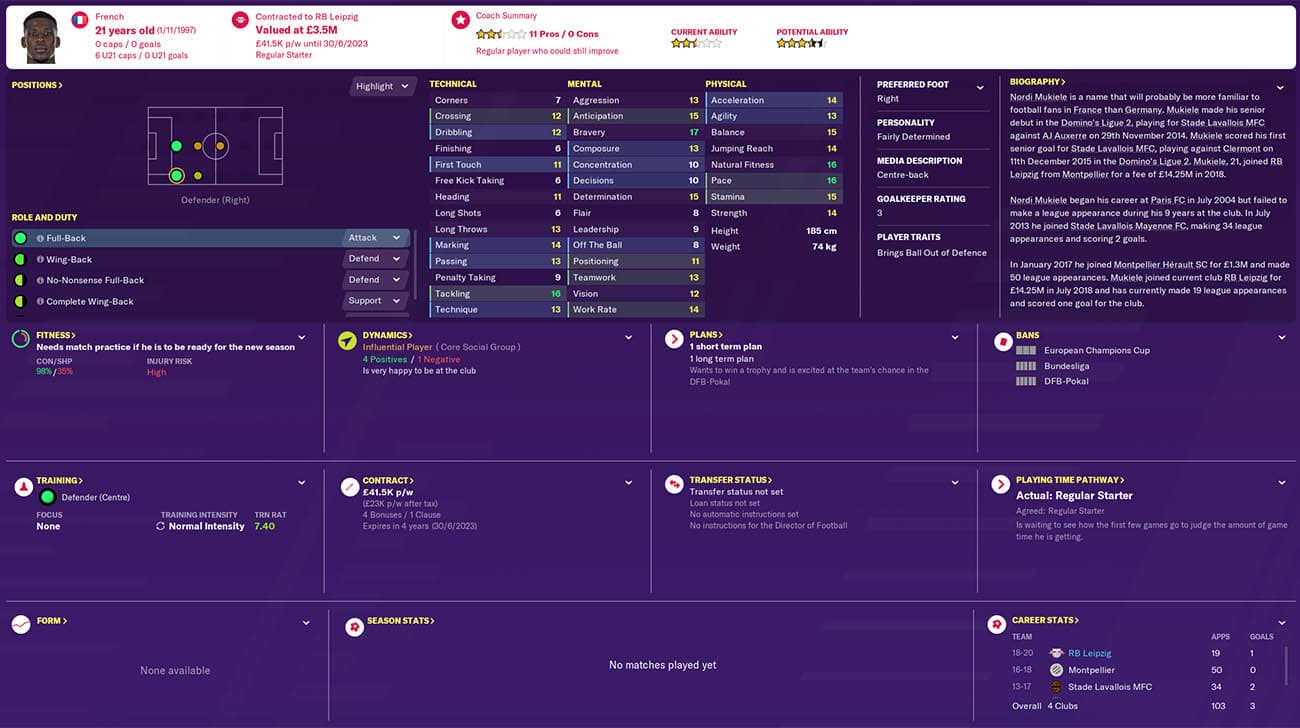 The young right-back could join Upamecano as another mainstay in RB Leipzig’s defence.

The fact that he’s had over 100 first-team appearances before the age of 22 speaks volumes to his potential but also his ability to make a contribution right away. 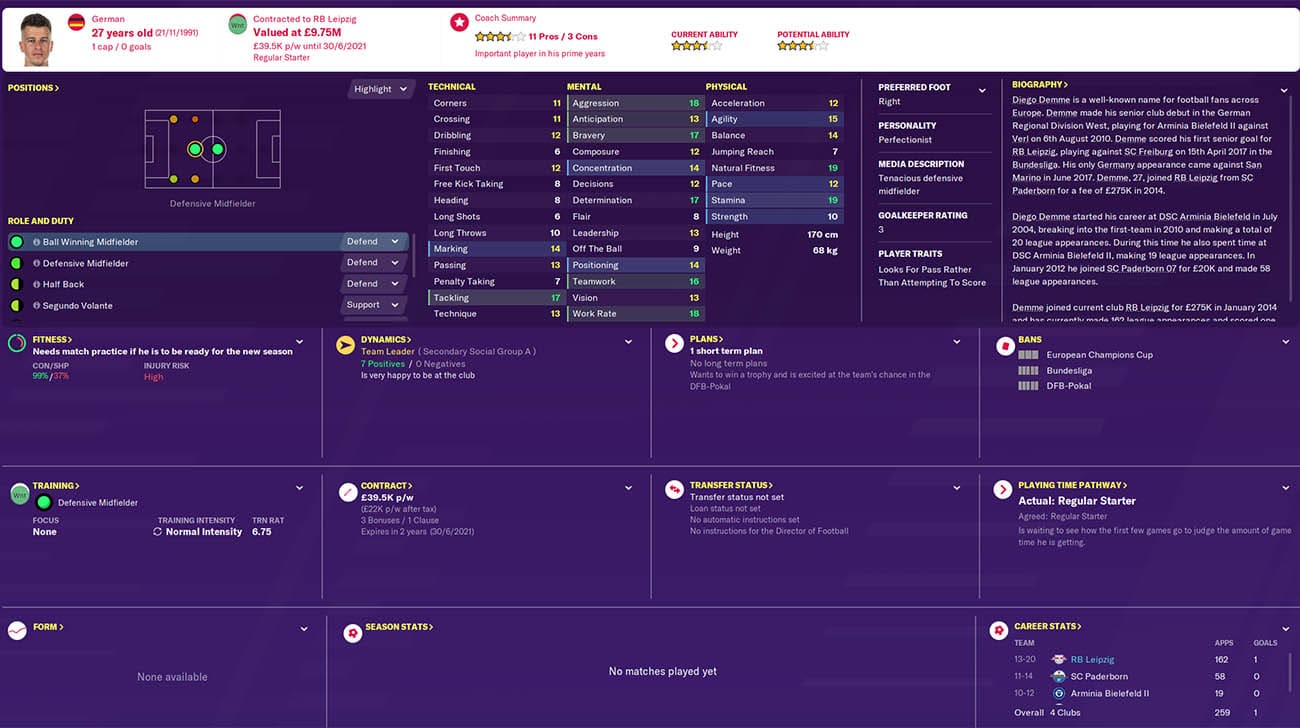 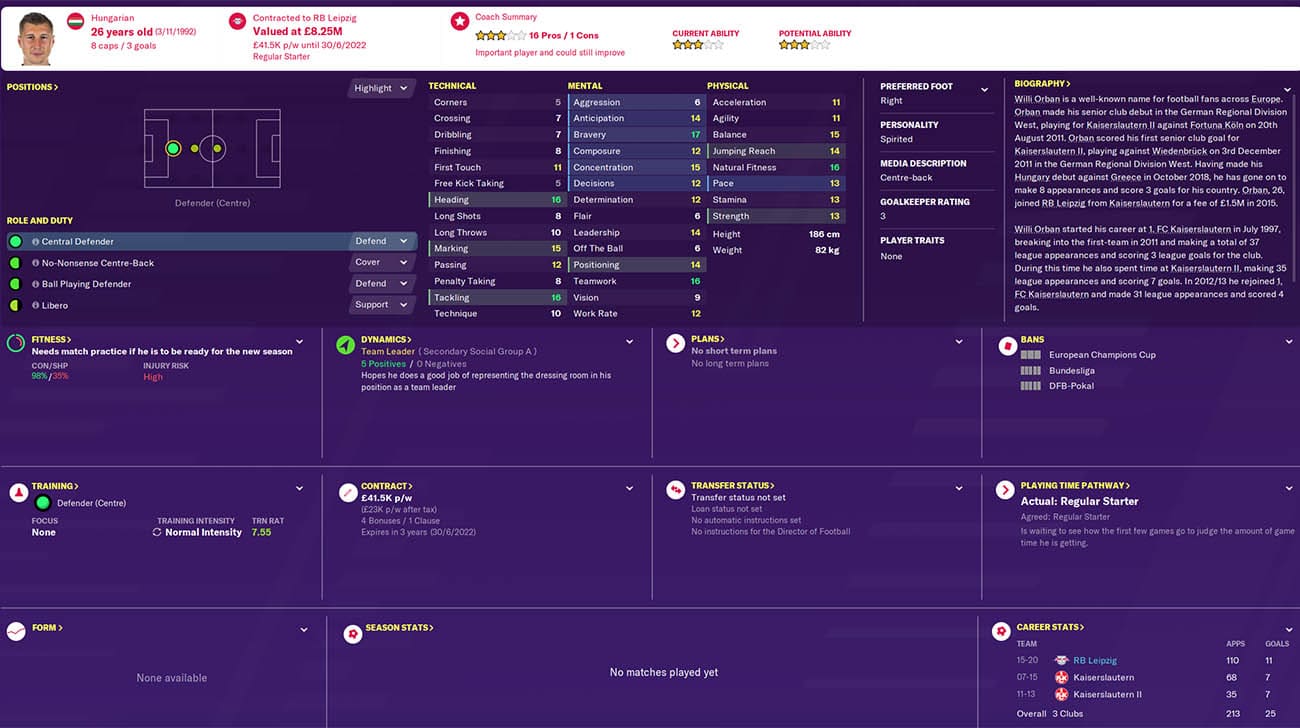 After you’ve read up our Football Manager 2020 RB Leipzig team guide, check out our list of the most valuable players at every position on FM20 by clicking here.