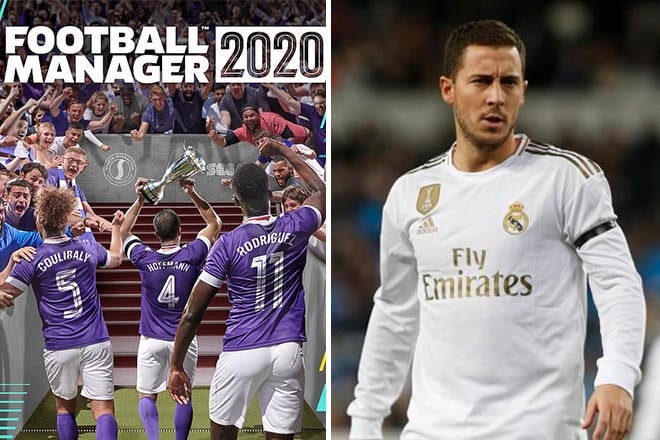 Football Manager 2020 Real Madrid – With the biggest budget of any side in La Liga and a squad littered with veterans and promising youngsters, Los Blancos appear to be fail-proof, yet endured a painful trophyless season in 2018/19.

Real Madrid didn’t spend close to £150m on Eden Hazard for the former Chelsea talisman to warm the bench. But as his struggles show outside of Football Manager, extracting the best form from him in Spain will be tougher than it looks.

With sensational technical ability, Hazard, who is the second-most expensive left winger at the start of any new game save in FM20, is the perfect player to build your side around. Working in your favour is the age of both Hazard (28) and Gareth Bale (30). Both wingers are in their prime and ready to make their mark, while the club also has replacements you can prepare waiting in the wings in the form of Vinicius Junior and Rodrygo. 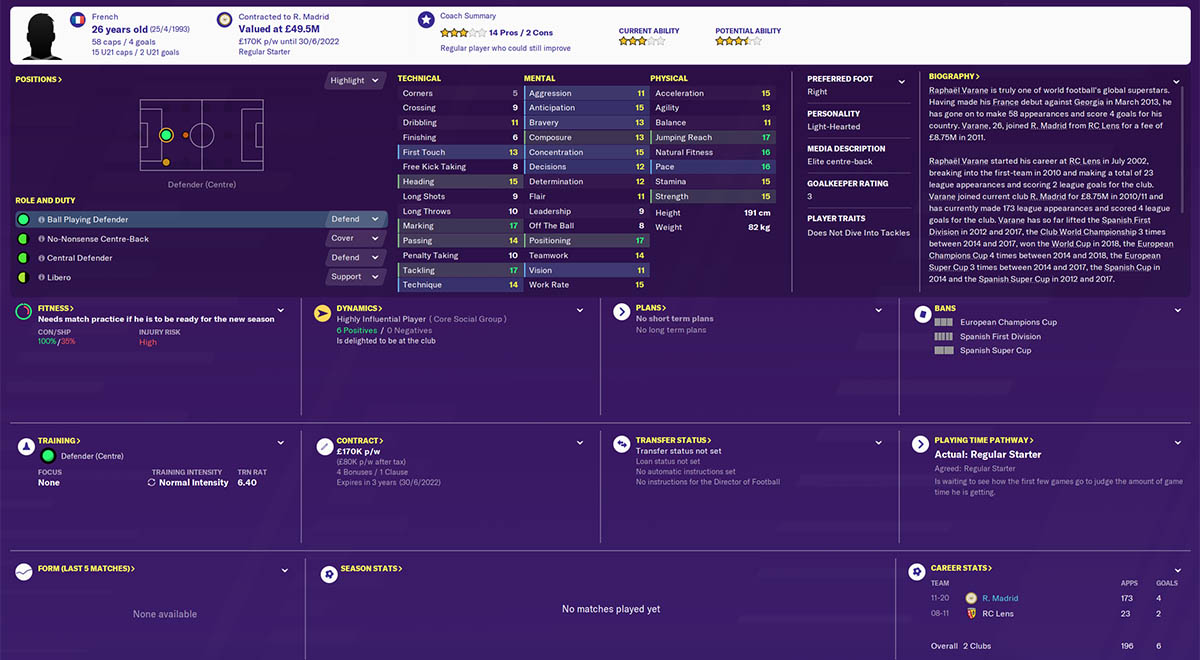 The ever-present Los Blancos defender has won everything there is to win in football and is still just 26. His best years, at least on paper, are supposedly ahead of him, which bodes well for the long-term success of your game save on FM20.

The fact that Varane has essentially conquered Spanish football means he could be tempted by a new challenge, but as long as you keep topping up his ever-growing trophy cabinet, there’s no reason to ever let the former Lens player depart the Santiago Bernabeu. 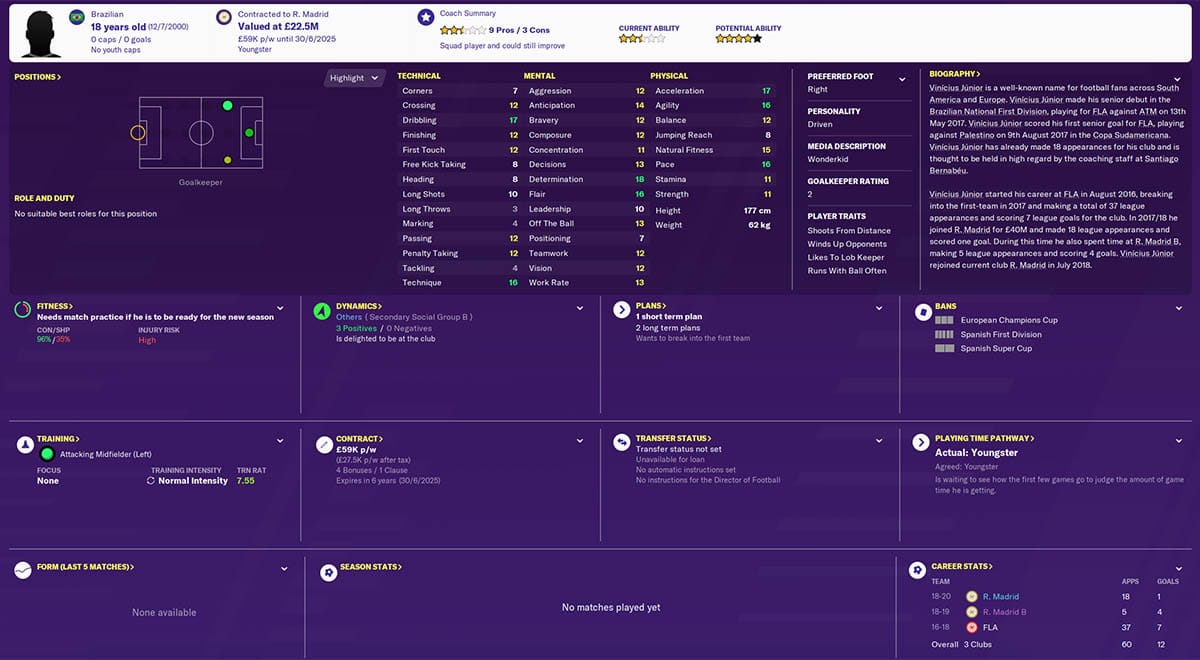 Vinicius Junior faces a few hurdles to gain a regular first-team slot at Madrid with Hazard and Rodrygo on the books, but his potential ability would suggest he’s worthy of the game time despite the competition.

The Brazilian enjoyed a prolific run throughout the 2018-19 season and could easily carve out a long-term future at the Bernabeu if he reaches the higher end of his potential. 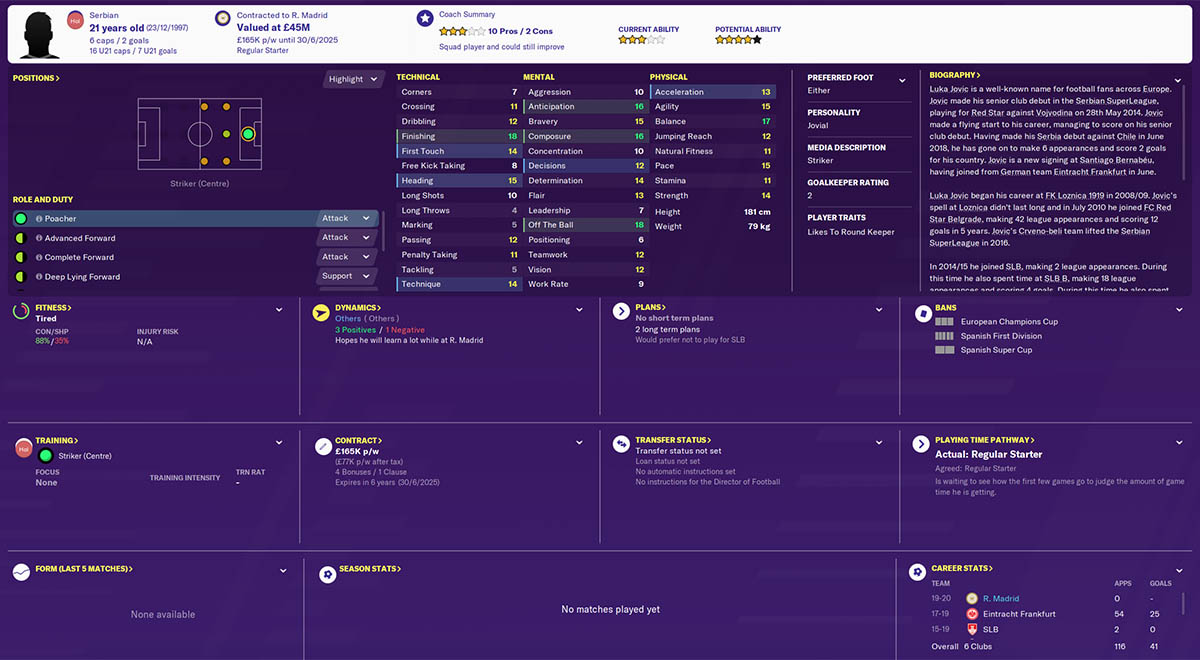 Jovic is only 21-years-old but clubs have already spent over £75m in transfer fees on the Serbian striker. Following a £52m switch to Madrid this summer, the former Eintracht Frankfurt striker arrived in hope that he could replace the goals lost by Cristiano Ronaldo, a departure which was heavily felt last season.

With only Karim Benzema ahead of him in the pecking order, developing Jovic into Benzema’s replacement-in-waiting should be a priority in your first few seasons.

After you’ve read up our Football Manager 2020 Real Madrid team guide, check out our list of the most valuable players at every position on FM20 by clicking here.