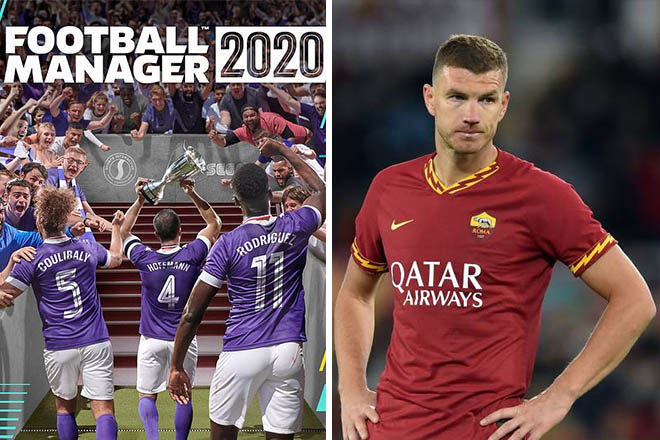 Football Manager 2020 Roma – The Giallorossi have only won three Serie A title’s in the club’s history, with their last coming in 2001.

A three-headed attack of Gabriel Batistuta, Francesco Totti and Vincenzo Montella combined to score 46 league goals en route to a league triumph 20 years ago. However, trophies have been hard to come by since then, with their most recent coming back in 2008 in the form of a Coppa Italia victory against Inter Milan. The bottom line is, Roma’s fans are hungry for a trophy. 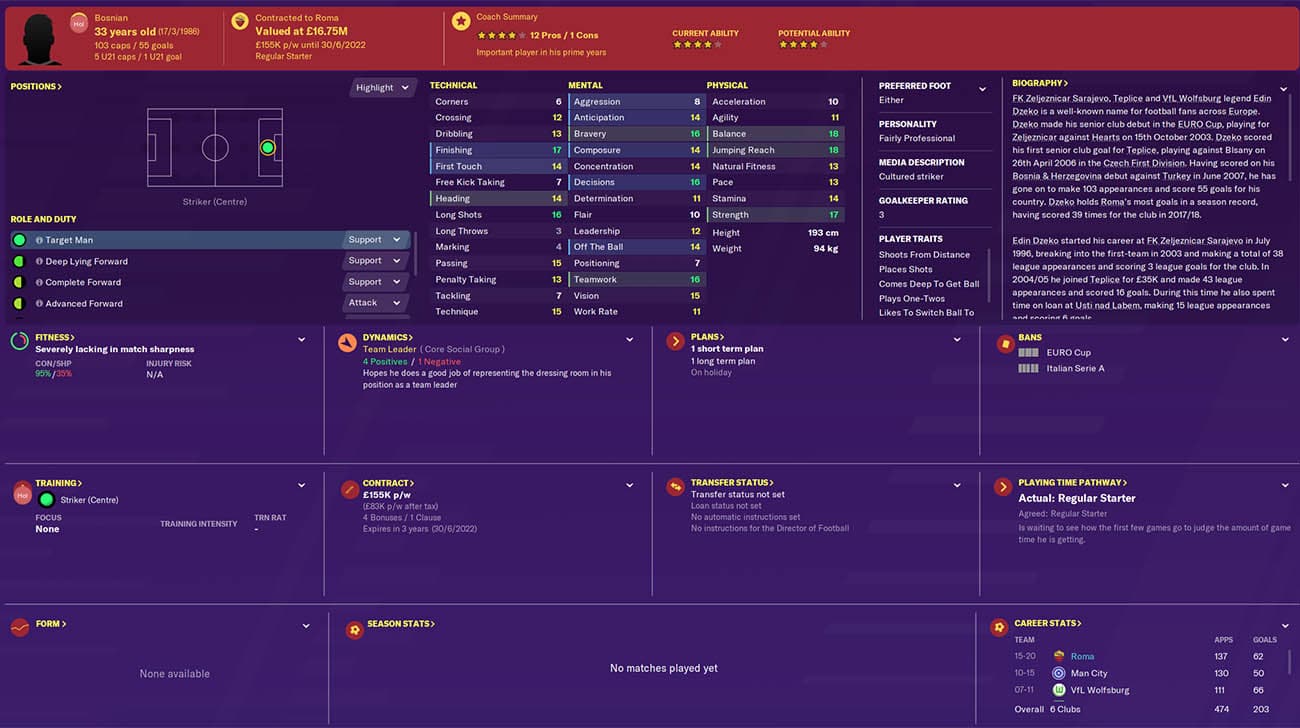 We wouldn’t usually advise building around a 33-year-old but Roma are stuck between a rock and a hard place when it comes to replacing Dzeko. The former Man City forward has scored 54 league goals in the past three seasons, but 45 of those came in his first two seasons.

With just 10 league goals in 2018/19, Dzeko appears to be declining on FM20, but with a transfer budget of just £15.5m, it won’t be easy to find a replacement with his sharp finishing. In other words, your best bet may be trying to get the best from what he has left until you have enough money to sign a long-term replacement. 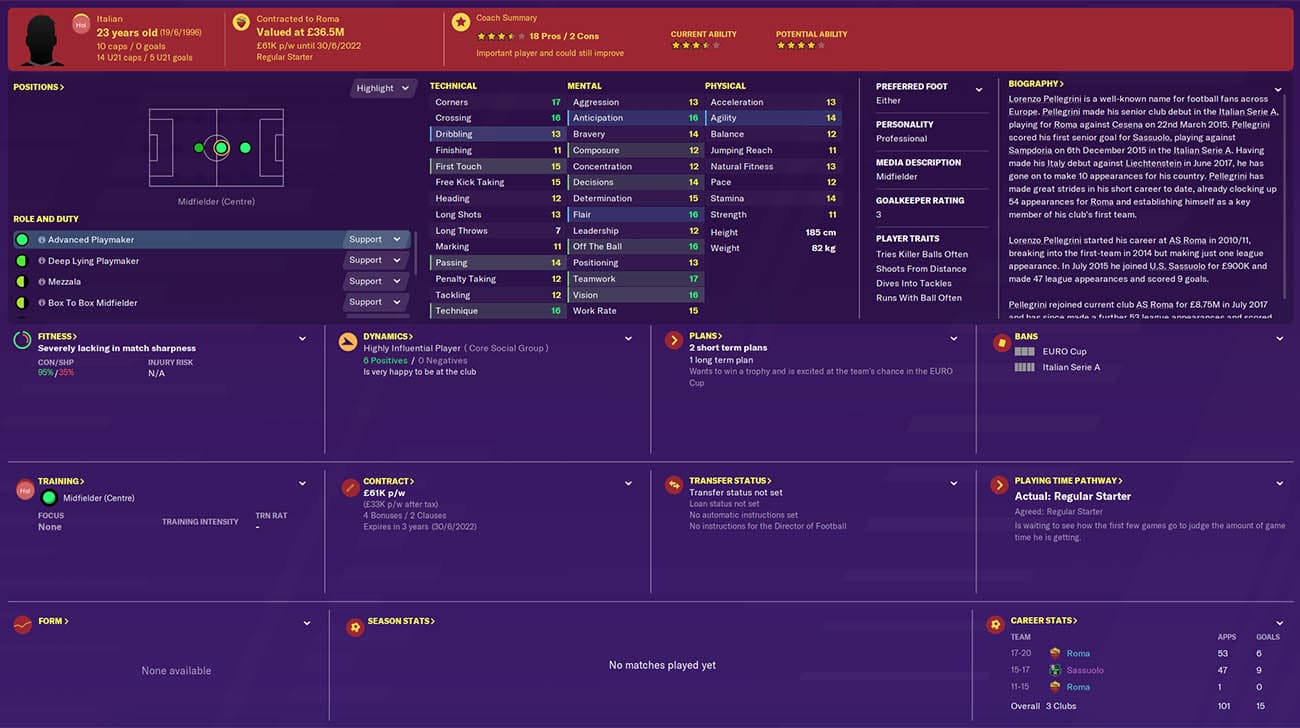 Pellegrini is the club’s best young star and a player who comes with immense technical ability. You won’t need to worry about set-pieces with Pellegrini on your books.

The Italian international is becoming a regular fixture in Roberto Mancini’s side and is one of Serie A’s best young talents. Resist the temptation to cash in on him if a bigger club comes looking as much as you can. 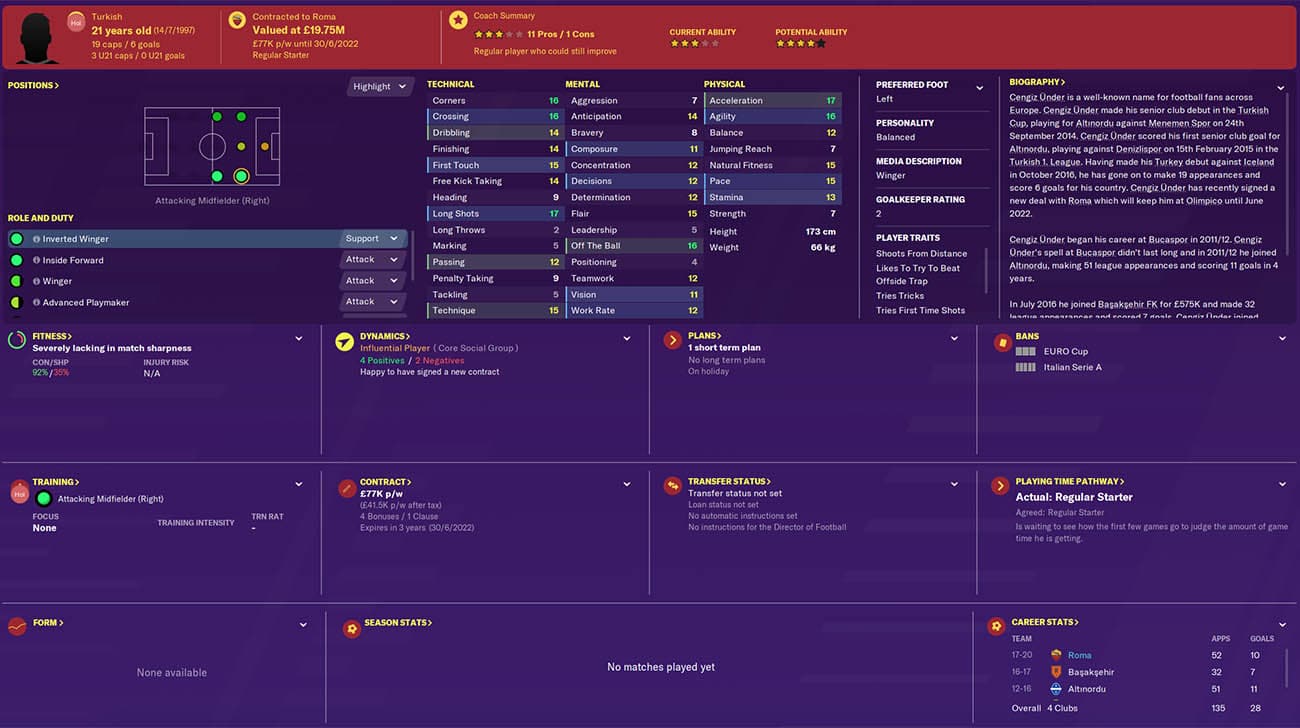 Under’s £11.75m switch to Rome back in 2017 is looking increasingly like another piece of smart business from the club, because if you were to sell him, he would probably fetch three or four times that amount from another side.

At just 21-years-old, the Turkish international has nearly 20 caps to his name and the ability to score long-range bangers from time to time. Getting consistent performances out of him will be key to any title push. 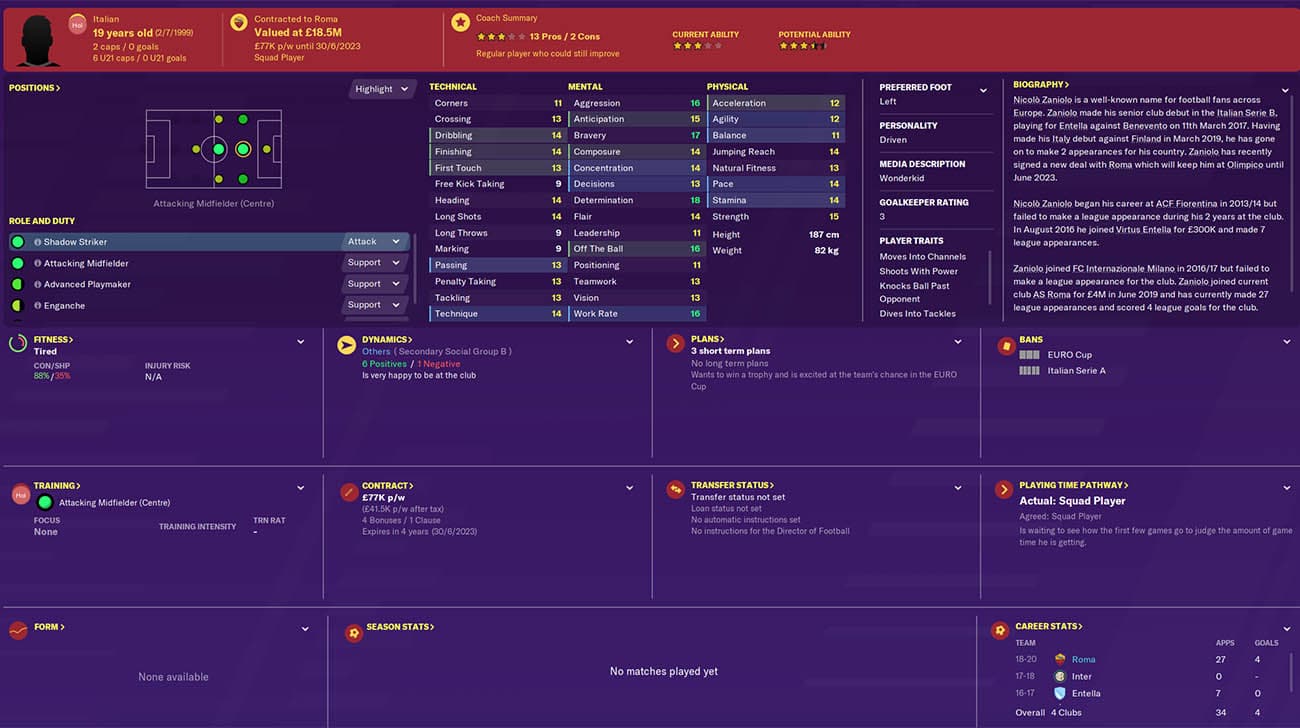 Joining Pellegrini and Unger further forward in your midfield is Zaniolo, another young Italian prospect who could become an integral member at Roma for years to come.

Some of the club’s other highly-rated youngsters include Alessio Riccardi and Daniel Barel Tueto Fotso. 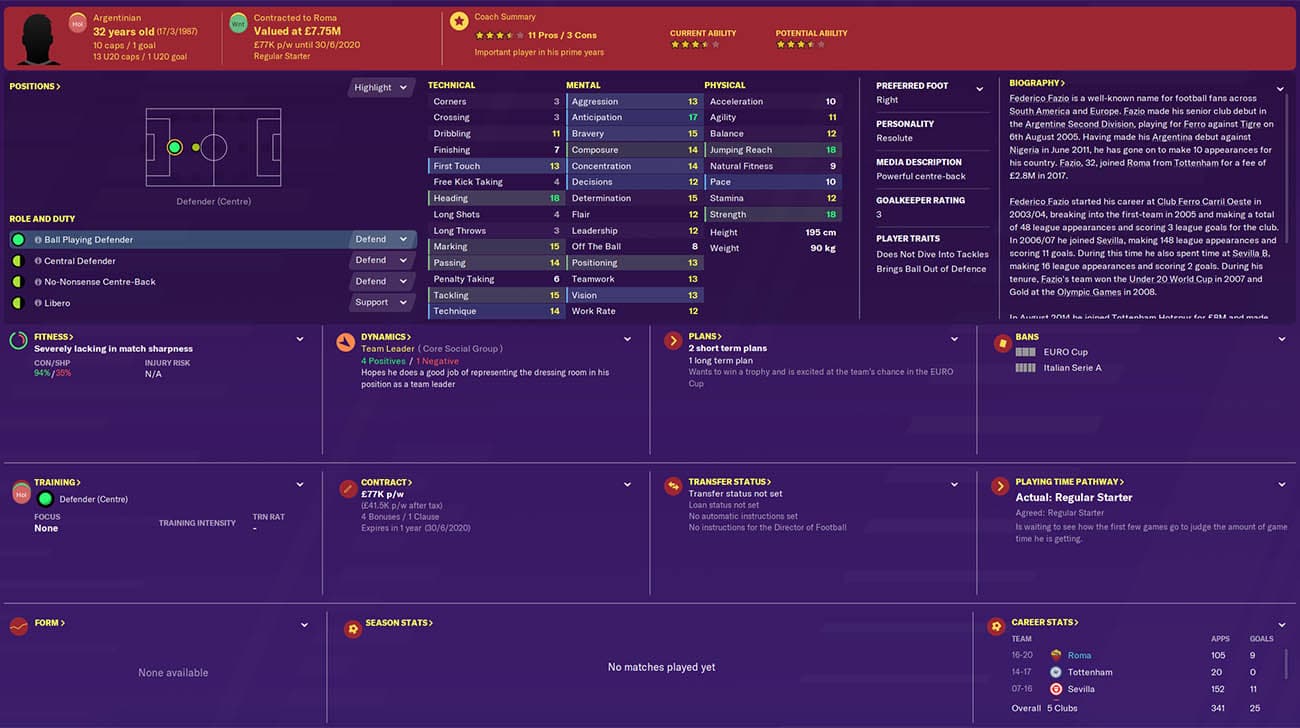 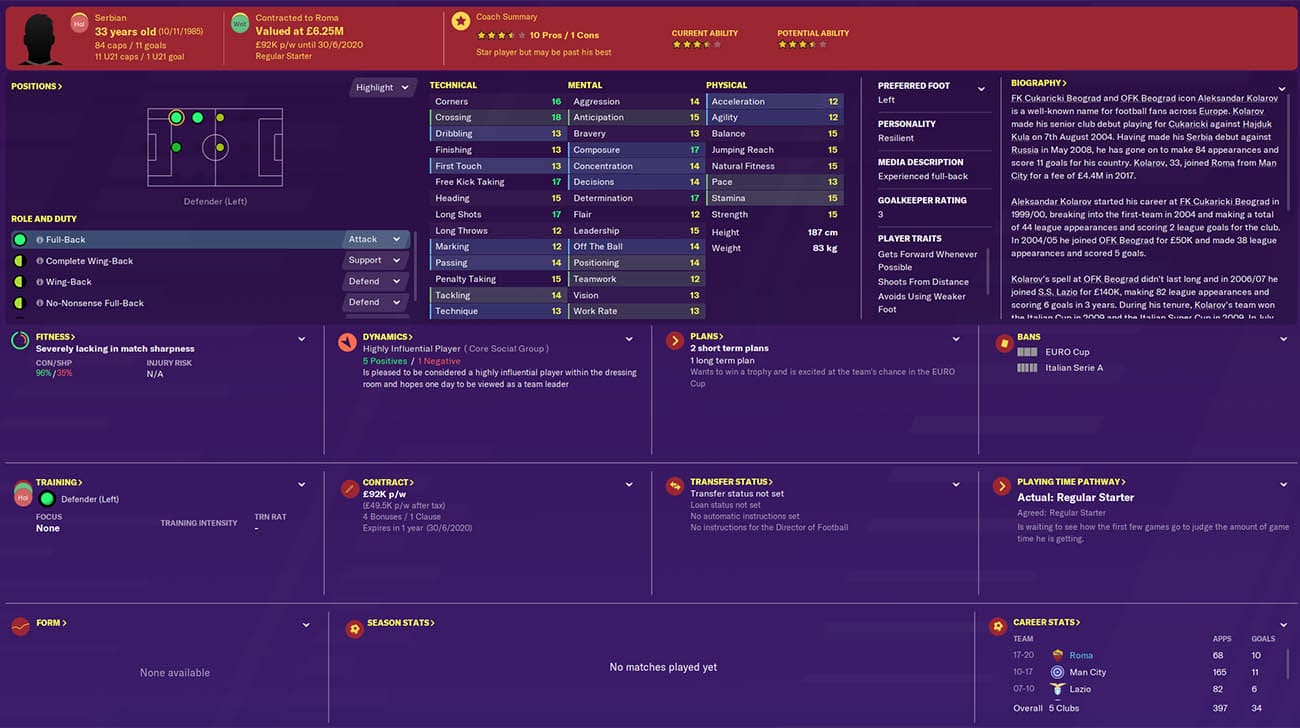 After you’ve read up our Football Manager 2020 Roma team guide, check out our list of the most valuable players at every position on FM20 by clicking here.