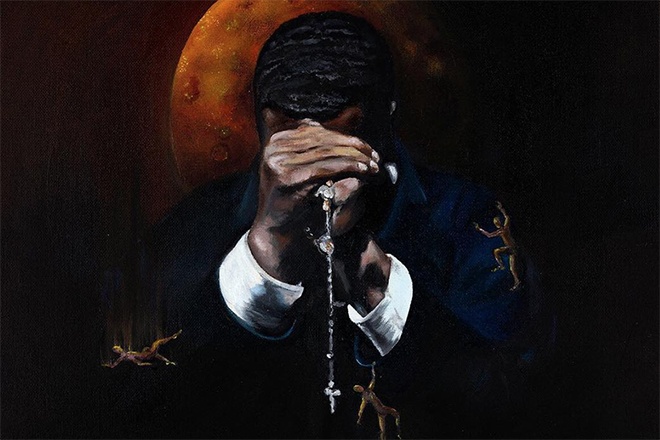 Posted at 16:22h in All Articles, News by Nathan Fisher

There will always be an air of caution that surrounds albums that act as sequels to an artist’s seminal body of work.

Artists take the risk of tarnishing the records name should its second version not reach the standards of its previous incarnation, so when Ghetts announced Ghetto Gospel: The New Testament, he probably knew the pressure he would be under.

Fortunately, grime is in a position where its forefathers and most influential members still want to contribute to its success with fresh material. Ghetts joins fellow OGs Wiley, Skepta, Chip, D Double E and Dizzee Rascal, in releasing recent albums, after being associated with the genre for more than a decade.

Ghetto Gospel: The New Testament begins with ‘Caution’, where Ghetts explains in detail his influence within grime, citing the number of tracks he’s torn apart, as well as quoting various stage shows which he’s shut down. This is the first of many examples of Ghetts’ immaculate storytelling ability through his rhymes, something that is perhaps often overlooked, with ‘Spiritual Warfare’ and ‘Next of Kin’ being superb examples of such.

‘Spiritual Warfare’, which features Leah McFall & Jordy, sees Ghetts deliberate over some of the unanswered questions of popular music culture, as well as allude to the existence of secret societies. Meanwhile, ‘Next of Kin’ sheds light on how certain environmental circumstances can negatively affect people and those around them.

Production-wise, both tracks are definitely a sign of the influence hip-hop had on Ghetts as a youngster (he even references listening to DMX on ‘Spiritual Warfare’), with neither sticking to the grime blueprint. Of course, the album includes moments that do adhere to his conventional sound and Ghetts does not disappoint. ‘Halloween’ and ‘Houdini’ are both aggressive and sinister, accentuated by an ultra-hostile contribution from Suspect on the latter. ‘London’ is an ode to his home city, with Ghetts enlightening listeners on his connections to each side of the capital.

Much like on Ghetto Gospel, Ghetts uses the lengthy track list to show how versatile an artist he can be, swapping the usual intense energy in his delivery for a calmer approach, lending a better suitability on ‘Black Rose’. ‘Jess Song’ dedicates itself to a woman battling with cancer, vividly described her pain with poise throughout, another example of Ghetts’ widening his palette.

Entertaining guest verses begin with President T adding extra animation to ‘Pick Up The Phone’ and Ghetts’ back-to-back dialogue with Chip on ‘Shellington Crescent’ is also a genuine highpoint. The seemingly customary appearance from Donae’o on every major grime, rap or hip-hop release continues on ‘Preach’. Ghetts employs lesser-known names such as Rukhsana Merrise to sit alongside the likes of Stefflon Don and Wretch 32, in addition to Kojey Radical helping to close out the album on the emotive ‘Black Rose’.

The second instalment of Ghetto Gospel, nostalgia aside, definitely boasts the same level of complexity, detail and versatility that Ghetts showed on the first, while naturally shaping the overall sound to match the 2018 aesthetic, displaying typically airtight versatility throughout.

Listen to Ghetto Gospel: The New Testament below: