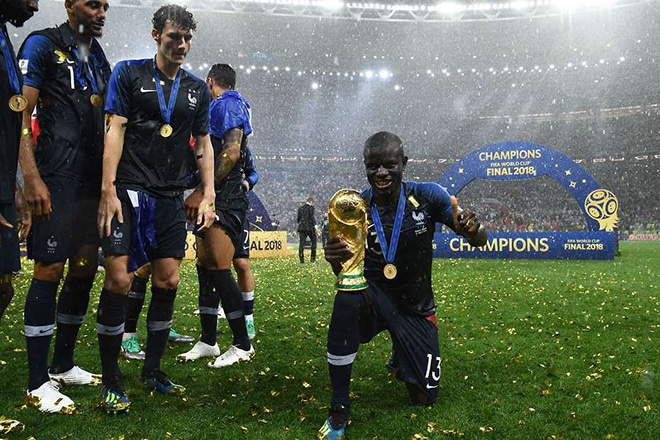 Posted at 13:53h in All Articles, News by Ajay Rose

N’Golo Kante is without a doubt one of the most modest modern day footballers in recent memory.

After France beat Croatia 4-2 in the 2018 World Cup final, Kante could be seen lingering near the trophy as the celebrations kicked off, although, the Chelsea man didn’t picked up the illustrious Jules Rimet trophy on his own accord.

It was said that Steven NZonzi had to force Kante to hold the trophy, as Kante was too shy to ask to lift the trophy himself, a tale former Arsenal striker Olivier Giroud confirmed via Chelsea TV:

‘I have to say I have been clever because I took the good position to touch it.

‘I was waiting my turn,’ Kante said before Giroud interrupted with: ‘He is so shy so he didn’t want to say “give it to me”, so he had to wait. Sometimes people came in front of him. ‘At the end of the day someone took it and gave it to him.’

Kante was a key member of the France side who went all the way this past summer in Russia, starting all seven games including the final, adding the biggest prize to an already stacked trophy cabinet. In the past three seasons, the former Leicester man has won the Premier League twice, won PFA Player of the Year and won the World Cup, as well as reaching the final of the European Championships on home soil in 2016.

To further prove Kante’s refreshing modesty Chelsea recently beat Arsenal 3-2 and the ever-present defensive midfielder bumped into a Gooner after the game, who said he was upset his team had lost. Kante’s response? ‘Sorry’.