Posted at 24 Sep, 00:56h in All Articles, Interviews by Ajay Rose
— Interview: The Heavytrackerz’ DIY approach has allowed them to transition from producers into artists

THE HEAVYTRACKERZ INTERVIEW – The music-producing piece of software genius that was Music 2000, a PlayStation 1 game released back in 1999, provided The Heavytrackerz with a first-hand insight into the DIY approach needed to succeed as producers.

TDE’s in-house producer, Sounwave, among others, is another who first ventured into producing via the PS1 smash, and like the man behind many of Kendrick Lamar’s hits, Teddy and Tank, better known as The Heavytrackerz, have followed suit.

The production duo from Walthamstow, East London, have adopted a quarterback-like role in grime’s resurgence, producing major hits and their own debut album. What underpins those influential feats is a heavily DIY-approach, one that began with a PS1 game and then manifested into a mentality that enabled them to consistently find ways to take the next step.

“Those [Music 2000 days] were funny days. You had the memory sticks as well so you could make beats on the PS1 and save them after. I can’t remember how we used to get the beats onto our computer, but it was an elaborate process. 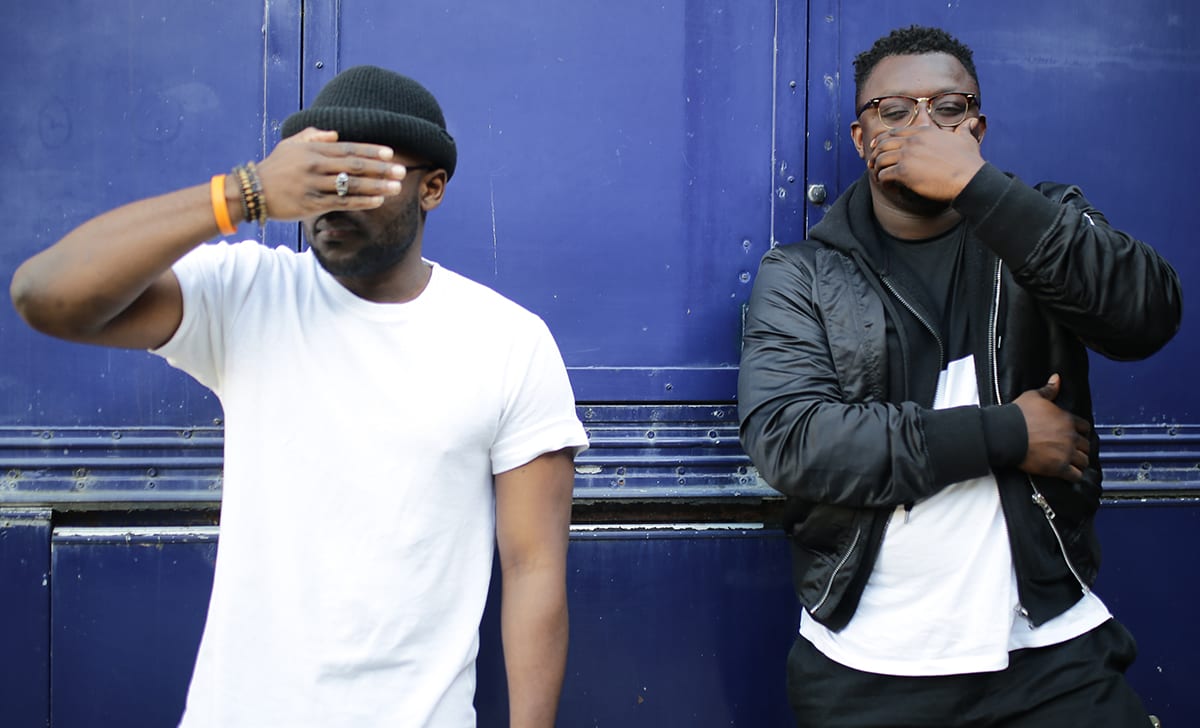 “We had guys from ends just spit over it to test it out. Then it went from doing it in college then at university. When you get your student loan, then now the dreams become a little bit bigger, so we put our money together to buy Pro Tools and mixing decks. We paid over a grand for it, and bear in mind, this is 2005, £1000 to a bunch of 18-year-olds is a lot. The entire loan was only like £1300.

“That’s how we started getting the equipment, but then we didn’t know how to use it, so we went on YouTube to figure it out. Then you see that Timbaland or Dre used one type of computer memory, or so you want that. Then when things transitioned from PCs to Mac’s, we got a Mac. Tank was the guy, he would always work out what we need next,” recalls Teddy of how to the pair found the feet as producers.

Much of their earlier work saw The Heavytrackerz lend their talents to songs of a predominantly pop or house variety. Then came ‘German Whip’ in 2014, a top-20 charting single and defining moment in whatever you label you give to grime’s renaissance in recent years.

“In terms of the ‘the Heavytrackerz’ being a thing, it wasn’t that before ‘German Whip’, it was ‘these man are sick, whoever these guys are’. It’s almost like being on the bench for a football team. You’re the sub striker and you’ve been watching the main striker so much, that when we came on, we knew already what to do and how not to just be bedroom producers,” recalls Teddy of ‘German Whip’s’ impact as a breakthrough moment.

With production credits for the likes of Giggs, Wiley and Stormzy, to name a few, I asked the pair to state the three tracks they’ve worked on that they are most proud of. 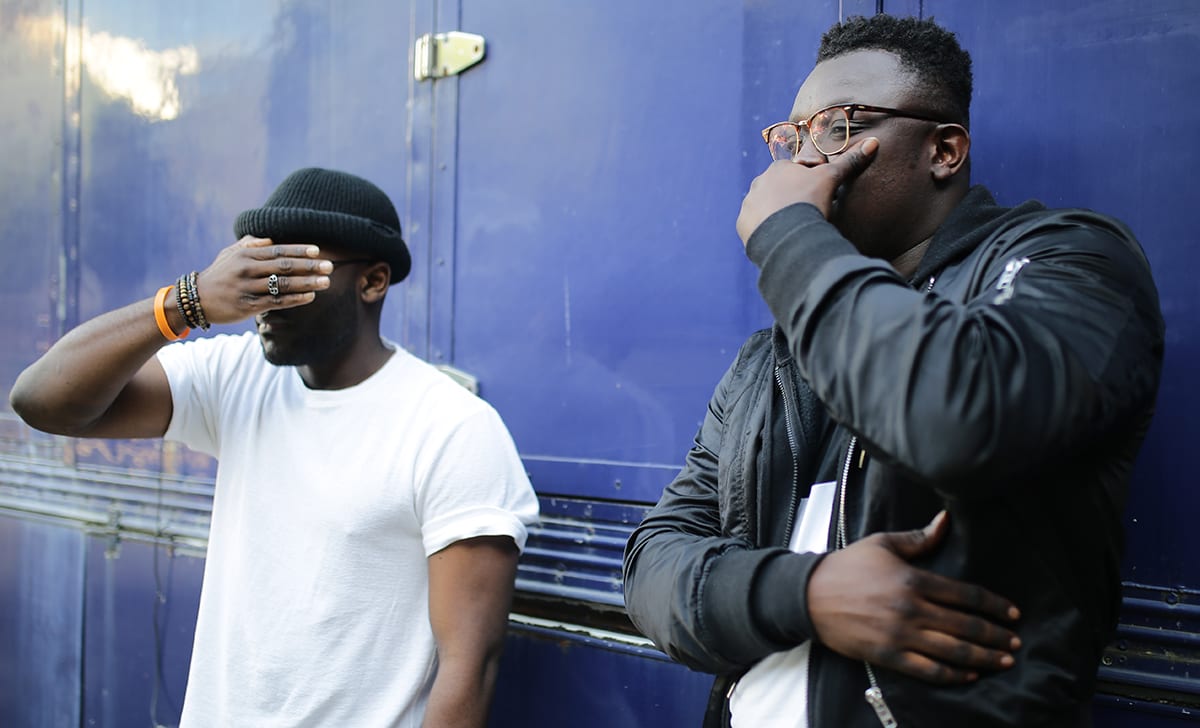 “Izzy Bizu for definite. Another one of my favourites is one of the remixes to, but it never got released, because we handed it in late. It was Tinie Tempah’s and Jess Glyne’s remix of ‘Not Letting Go’”. The third one would be Lethal’s new one with Giggs, ‘Round Here’. That’s cold”.

With a tidy list of successful production credits to their name, The Heavytrackerz decided to go one step further and release a debut album.

Odyssey: A Musical Journey is an independently released body of work that unapologetically confronts the industry producers face, and how they can be overcome. 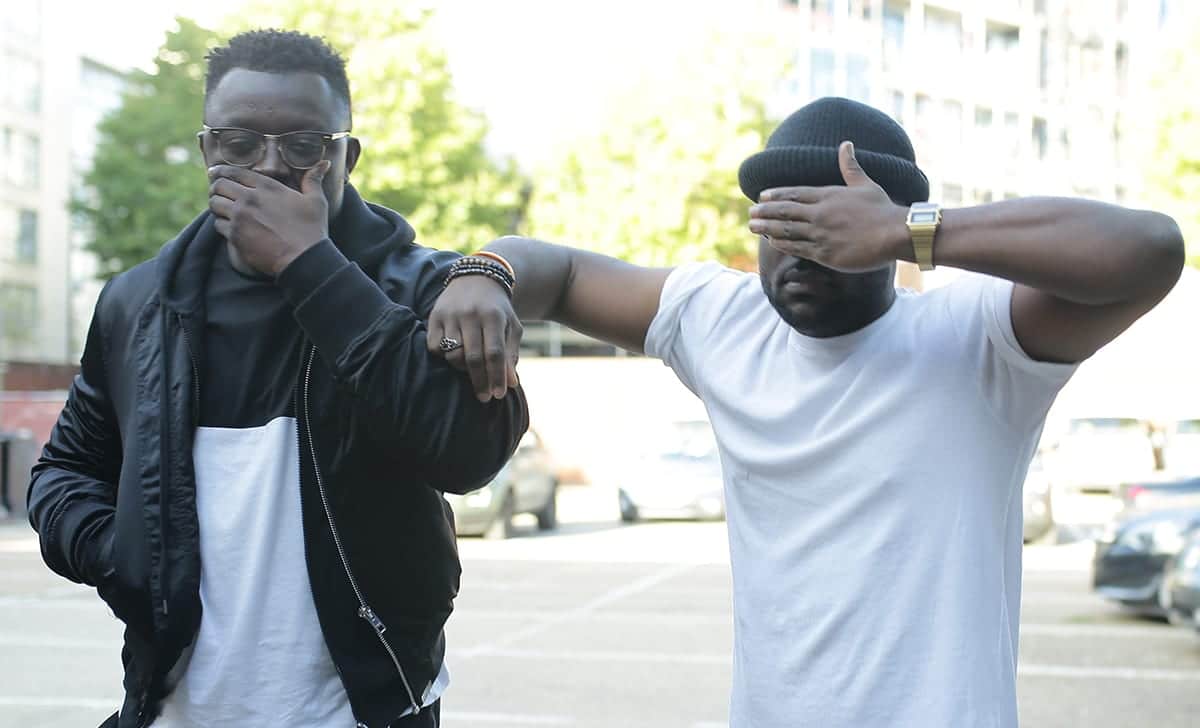 The central theme of their debut album is enveloped in a sense of frustration towards industry figures who doubted the idea of producers ever making an album. Where does that industry frustration stem from?

“Usually with producers making albums, it’s just 10 tracks put together with no theme, So the first thing we said was, ‘we either give them 10 to 15 ‘German Whip’s’, or we challenge ourselves, pick a subject that we believe in and we follow it.

“Remember, we’re producers, there’s no women twerking in our studio, there is no ‘look what I’m rocking’. So from our point of view, we thought about what we can talk about – the industry. When you look at the next generation making their music, nobody is telling these lot, this is what goes down, so we thought we might as well do it,” explains Teddy.

The project’s first single, ‘Rudeboy Flex’, which features Lethal Bizzle, Ghetts and Face, saw The Heavytrackerz choose to avoid major platforms for its release, instead releasing it through their own YouTube channel.

“We were scared as s**t as well, because we spent almost £7000 on that ‘Rudeboy Flex’ video. So it’s like ‘bro, you’re gonna spend £7k on your own channel, you’ve only got like two fans on your channel’. But now it’s reaching close to 100,000 views, so it’s good. That first single was the last one we released on the album. We wanted to hit the airways and announce we were here. The reception to that has been crazy”. 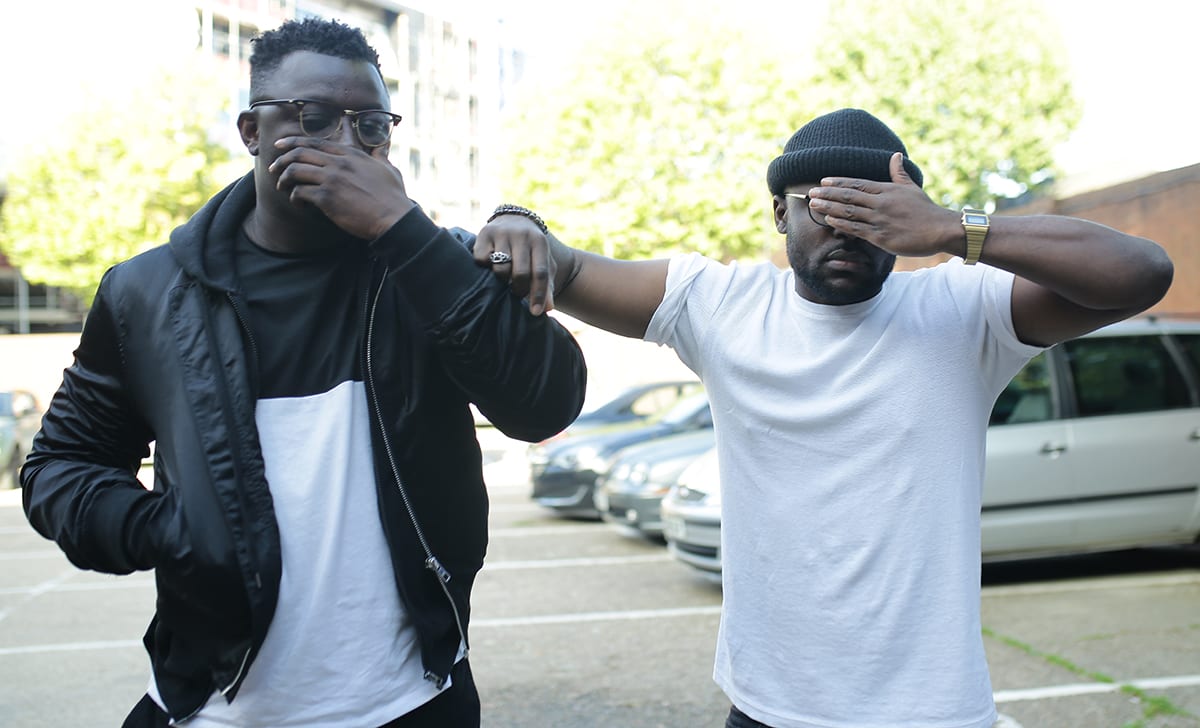 Odyssey: A Musical Journey is an 18-track offering that brings together 32 different artists, including JME, P Money, Ghetts, Big Tobz, Young T & Bugsey, Donae’o, Lethal Bizzle, Shola Ama and Noel Clarke. With such an eclectic mix of sounds on offer, establishing a common theme between them all may prove tough.

Summarising their debut album to a tee is ‘Control’, an offering to remind listeners of the importance of remaining in full control of your music as artists like JME, P Money and Donae’o have to great effect over the years.

“We had Donaeo do his bit, then we had Kurt do the chorus, and then we sent it to Kai, the guitarist, who does a lot of stuff with Example. Kai done his riff and now it was a case of, ‘do we delete that because it doesn’t go with the first half of the beat?’ But then we decided to embrace it and add even more to it, so the guitar riff completely changed the tune,” explains Teddy of ‘Control’s’ origins.

How did the pair go about deciding who exactly to enlist for their debut album, which features a range of established and lesser known artists? 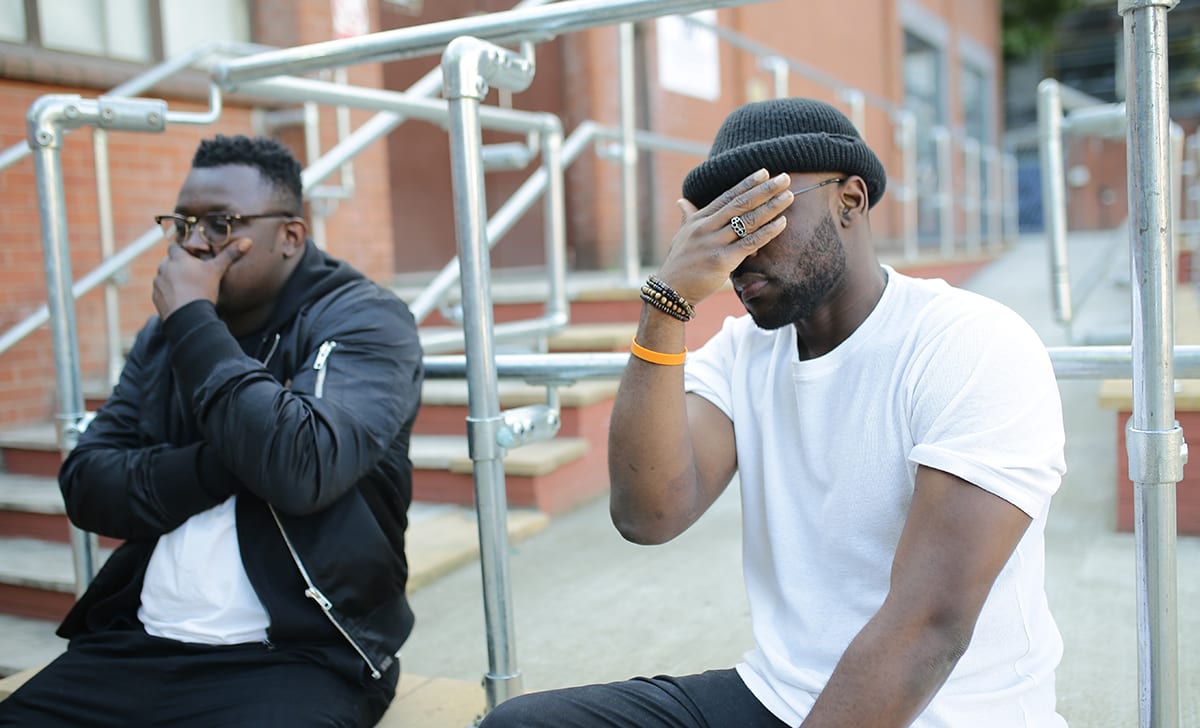 “We just wanted to find the right balance. That was the whole beauty of it, having the right balance of artist from top-tier to bottom-tier, finding the balance between making bangers and making a story out of the album,” says Tank, as Teddy adds:

“That’s another thing we wanted to do, bring through new artists. We took that idea from Rudimental’s first album. They had a lot of people on there that none of us knew before that. Before that, we didn’t know who Sam Smith was or John Newman or Ella Eyre. We want to be established producers and bring forth other people the same way Dr Dre does and Pharrell does and all these other producers. You can’t be an established producer if you’re using a cheat code, that is, using people that are just known”.

Producing for other artists can often be as simple as sending a beat via email. Producing for yourself however, brings you into another space. You’re no longer the background co-ordinator, you’re the main act, a transitionary period which Teddy explains in more depth:

“If we were working for someone else, ‘Control’ wouldn’t have been ‘Control’, it would’ve just been the first half. That’s the best way that I can explain the difference between producing for yourself and producing for other people. The Tom Walker tune wouldn’t have been there, ‘Feel the Love’ wouldn’t have existed, and that’s a fact. People don’t wanna push boundaries sometimes, and that’s okay. Who are we to tell people how to make their tunes. But when it comes to our own thing, we do what we want to do. That is the difference. You can go in-depth a little bit more”. 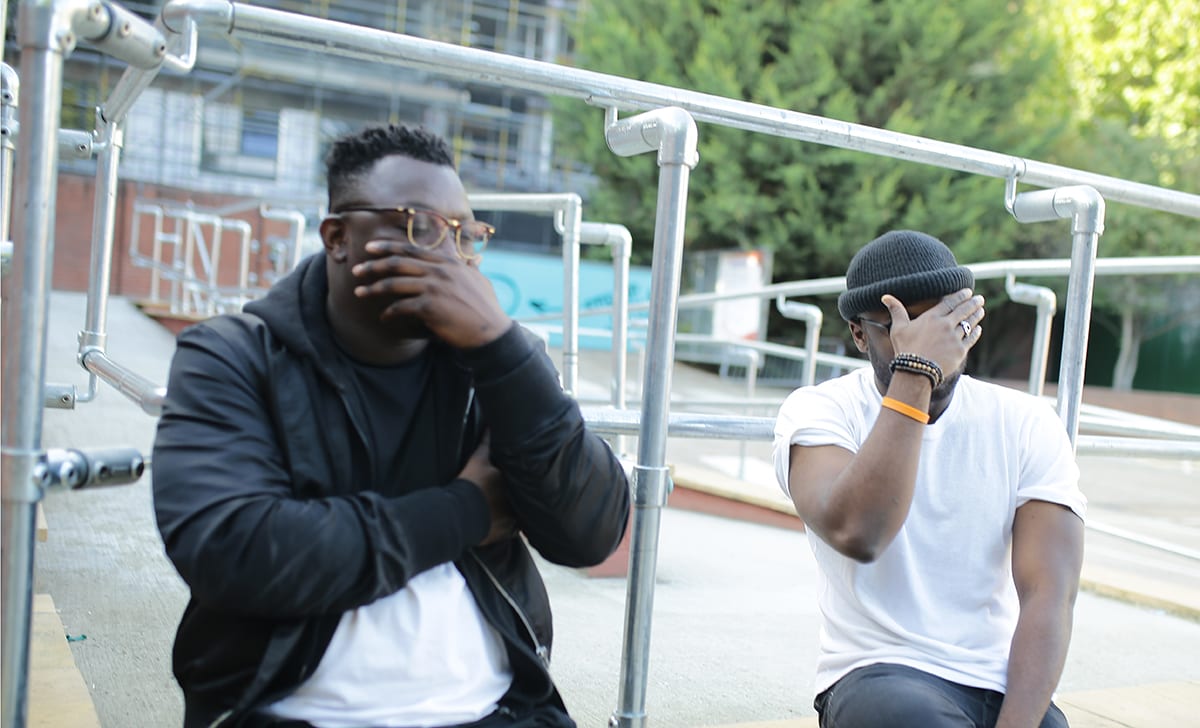 Compilation projects, be they albums, mixtapes or EPs, are becoming more common in the UK. Charlie Sloth, DJ P Montana and New Gen join The Heavytrackerz in releasing compilation albums in 2017, adding to overseas releases from the likes of DJ Khaled and Metro Boomin.

Aptly summarising one cause behind the rise in compilation projects, Teddy explains how the music industry being far more inclusive than ever before: “Now, it’s pic by Ashley Verse, article by Plugsville, produced by The Heavytrackerz, because everyone is involved, and that’s how it should be. It can’t be like the 80s where Madonna is a machine and everything goes through her, and nobody cares about the stylist or who made the beat.

The Heavytrackerz boast a weighty catalogue of huge grime anthems that helped catapult them into relevancy, something they’ve since built on with a diverse, multi-genre debut album. With a headline show on the horizon and plans to tour in 2018, the Heavytrackerz are firmly on their way to becoming artists, a roadblock-littered journey that hasn’t come easy.

As producers continue to receive more homage in the world of music, more beat-makers are not simply settling for sending instrumentals over email. They want to secure booking at festivals, tour the world and have their music ranked like artists. The Heavytrackerz’ relentless DIY approach means the obstacles faced in achieving those feats are likely to be overcome.

“You’re looking at America, Australia, but Europe’s definitely the plan. We’re doing Switzerland with Chip in December, and even that, they sent the flyer to us, and it had Chip on one side and us on other side. That says something, before, it would’ve just been Chip on his own, now it has us there to”.