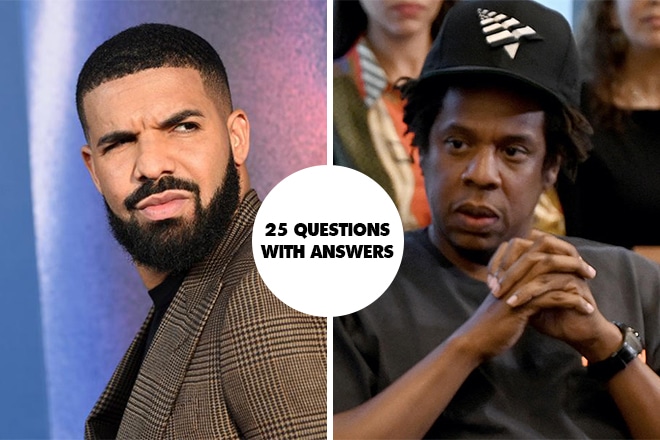 Posted at 01:15h in All Articles, Long Reads, News by Plugsville

As the coronavirus crisis brings life to a halt, virtual pub quizzes have stepped in to fill an entertainment void, so we’ve put together this list of 25 hip hop facts to help you out.

We found that there weren’t too many free quizzes available with answers, which is why we made our own. The list contains numerous hip hop facts written as questions with four multiple-choice answers. The correct answer is highlighted in bold. All you need to do is send this article to the quizmaster and you’re good to go.

Here are 25 mind-blowing hip hop facts for you to use during your next virtual pub quiz:

2 – What is the highest-selling rap album of all time?

3 – What is Eminem’s biggest selling album with over 27 million units sold?

5 – What artist did Jay Z have a rap battle with in his high school cafeteria?

6 – How many songs has Kanye West produced for other artists?

7 – The line ‘if you’re having girl problems, I feel bad for you son’ from Jay Z’s hit ’99 Problems’ is sampled from which artist?

8 – Why was the release of J Cole’s debut album ‘Cole World: A Sideline Story’ delayed?

A = Cole wasn’t happy with the album, B = Album got leaked, C = Label politics, D = So Jay Z could feature on a track

9 – What was the original name of Kendrick Lamar’s second album ‘To Pimp A Butterfly’?

10 – Which of these artists had a writing credit on Post Malone’s #1 hit ‘Rockstar’?

11 – Who is the richest artist in hip hop with a net worth of over $1 billion?

13 – What was Future’s original stage name?

15 – Which rapper from Compton was on the set of Tupac’s ‘California Love’ years before they were famous?

16 – Which of these four singles has sold the most with over 20 million units?

17 – Which rapper co-wrote Will Smith’s hit ‘Gettin’ Jiggy Wit It’?

18 – Which actress was Snoop Dogg classmates with in high school?

19 – Which show did Wacka Flacka Flame get his name from?

22 – In 2000, 50 Cent was going to release an album called ‘The Power Of Dollar’ but the album was never officially released. What’s the reason for this?

A = Competitors flooded the market with bootleg copies, B = Lost the audio file, C = Wasn’t radio-friendly enough, D = Couldn’t get clearance for features

24 – In the early 2000s, Pharrell and Chad Hugo had an extremely high radio presence. What % of all songs on US radio in 2003 were produced by The Neptunes?

25 – Which rapper once held the Guinness World Record for having most syllables in one second?