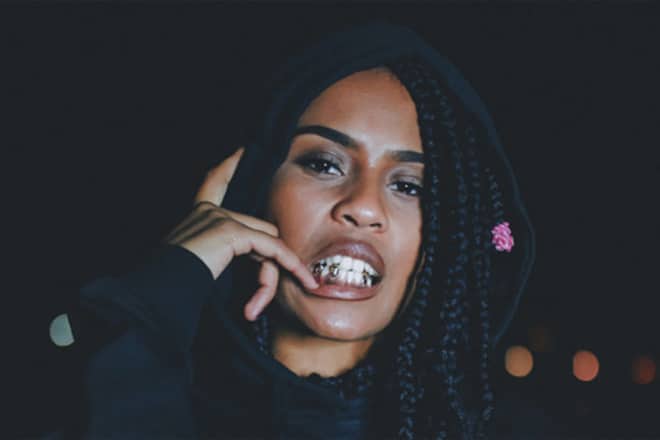 Posted at 22:45h in All Articles, News by Kirin Sall

Hailing from the 0161-area code, this talented, unsigned 21-year-old artist has further solidified Manchester on the music map. Her latest EP, Flight Mode Vol. 4, blends a unique twist of hip-hop, trap and jazz with a special UK flavour. The term ‘one to watch’ is often associated with her assorted sound and it’s a label that couldn’t be more correct.

Growing from strength to strength after being in the spotlight for only a year, IAMDDB’s newest project is the fourth instalment to her Flight Mode series, and encapsulates the dreamy harmonies we all love her for. The EP features eight songs, each a banger of their own, despite being only 23 minutes in total. It also features the single ‘Drippy’ which she released a video for in early June.

Born Diana DeBrito, her distinctive voice is unlike any other musician, which is a credit to her hard work since she has been carving her signature sound from the age of seven, when she first started writing songs. DeBrito’s father was an Angolan-based Afro-soul and jazz musician who first inspired her to get into music. The urban-jazz sensation soon toured Angola with her Dad and his band, performing for the President of Angola and various other high-profile events.

Before this, she released a song with Burga Boy under her real name Diana DeBrito, which you can find here, featuring a very different sound and look, disguised by IAMDDB’s usual fashion.

As she became more involved in the jazz scene in Angola, IAMDDB learnt more about producing and engineering beats, rather than focusing on just her lyrics. You’ll notice her credits as a producer and director on every single one of her tracks and music videos, leaving her completely in control of her craft.

The musician says her time in Africa was the turning point in her life, motivating her to return to the UK to pursue her musical ambitions professionally, under the name IAMDDB. The rapper-singer looks to her Portuguese and Angolan roots for inspiration, calling Bob Marley her number one muse, as well as Tom Misch and obviously, her father.

On her first (and last) day of university in September 2016, IAMDDB released her first song ‘Leaned Out’, and dropped out only one hour after attending. Less than a year later, the Mancunian superstar’s hit summer anthem ‘Shade’ from her Hoodrich Vol. 3 EP rocketed her name to fame, and has so far received over 13 million views on YouTube alone.

Kicking off the year securing a spot in BBC’s Sound of 2018 list, IAMDDB was marked as the one to watch, and it’s easy to see why she has made it so far. Her talents have since been showcased to a significantly bigger audience, as she supported Bryson Tiller on the European leg of his tour, featured in Tommy Hilfiger’s 90’s inspired jeans campaign and even has a COLORS studio session on YouTube.

Her effortless cool-girl neo-soul signature sound sticks with anyone who listens, making it easy to identify any IAMDDB tune. She describes her sound as ‘eclectic, hypnotizing and soothing’ and we have to agree that is really is a #VIBE and Flight Mode Vol. 4 is no exception.

There is no stopping her now as IAMDDB proves herself stage-worthy this festival season, with upcoming performances at Wilderness, Bestival and Reading festival, to name a few. We can expect big money moves from IAMDDB this year, as this homegrown talent quickly steps further up the ladder to success.