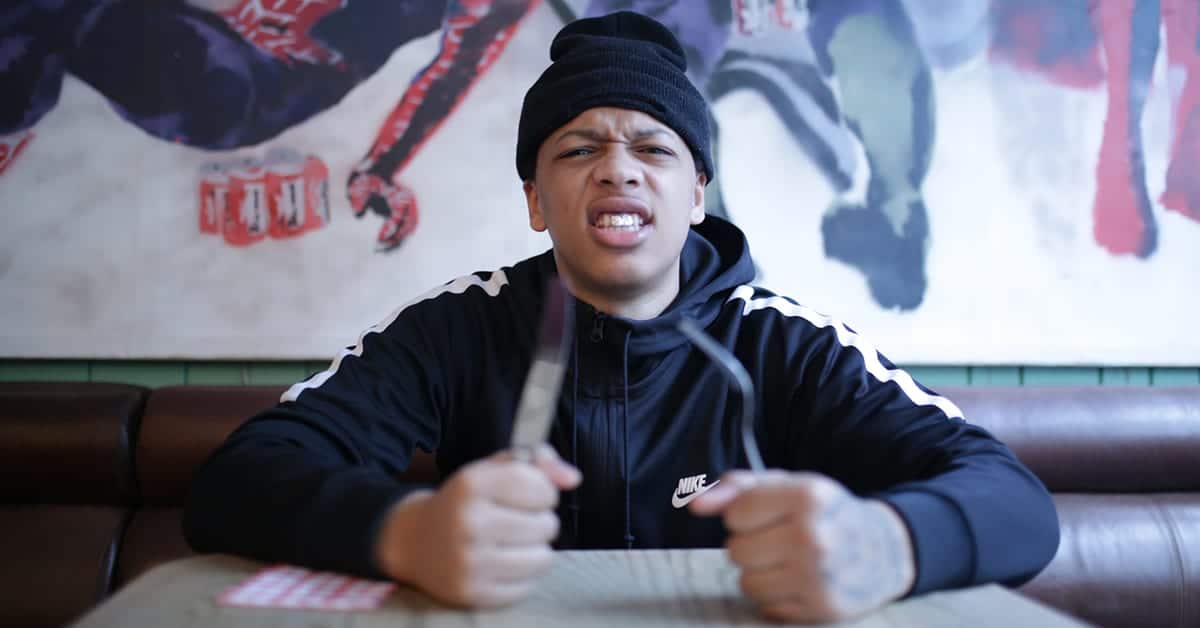 Posted at 17:46h in All Articles, Interviews by Ajay Rose

IZZIE GIBBS INTERVIEW – “A few years ago, Dice shouted me to go and do a verse for a producer on their label called LDP, who was working on an EP at the time and wanted me to lay down a verse for the project, so I travelled to North London. Straight after I did the verse, before they even dropped me to the train station, they said they wanna sign me, so that’s when I took it seriously”.

After that brief recording session, Dice Recordings put pen to paper with Izzie Gibbs after he laid down just one verse, a nod towards the impact his abrasive and uncut brand of grime possesses. Hailing from Northampton, Izzie Gibbs spares no prisoners when he sprays over a beat with scatty lyrics and a heavy dose of substance, often switching between rude, reload-worthy bars to deeper, captivating tales.

A few weeks after getting signed, Project X was released in March 2015, Izzie Gibbs’ debut EP that showcased his raw energy across six-tracks. The first of those six, ‘Get It’, took a more reflective spin, showcasing another layer to his music on top of his spray-at-any-time-or-place. “I feel like a lot of people that didn’t listen to me before, listened to me because of that song. The reception I got for that was baffling, it was my first video to his over 100,000 views, but I didn’t expect that”. 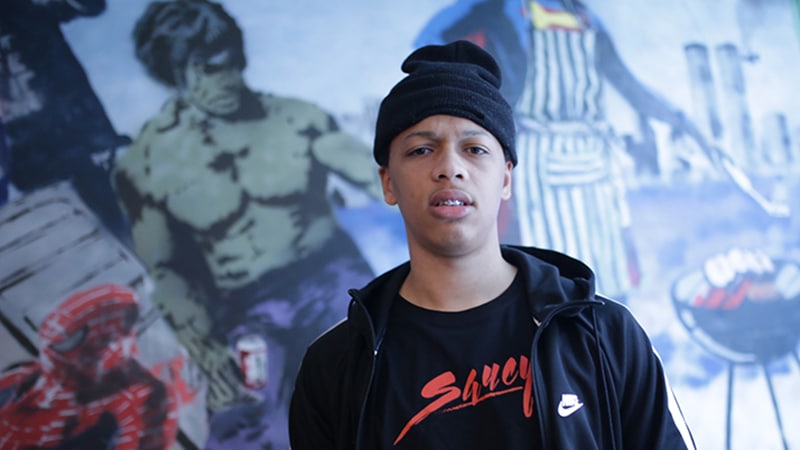 Shaquille O’Neal, for reasons still unknown, has declared that he’s a proud fan of ‘the Cobblers’, Northampton Town, but aside from that, the small East Midlands town might not cross the radar of your typical grime fan. The internet has weakened the barrier permitting non-London artists to gain more traction for their music, but to what extent?

“When I first started, I was thinking, ‘we all spit, so I’m just gonna just spin everyone, and I felt that people felt threatened, but I got that feeling that me coming from somewhere outside of London, people are automatically more interested in what you’re doing.  Coming different places will make you flow different as well.

I did a tune with Jaykae from Birmingham and he says ‘baff’ and I say ‘bath’. I could do a whole bar rhyming that word (even though I wouldn’t) and it would sound different. But someone from Birmingham couldn’t do that with Jaykae, because they’re from the same area. That’s how it is with London. So at first, it was a barrier because people didn’t wanna allow me to get myself in, almost like there’s a waiting line, but f**k that. now it’s an advantage, people are excited to hear what I gotta say because I’m not from here”. 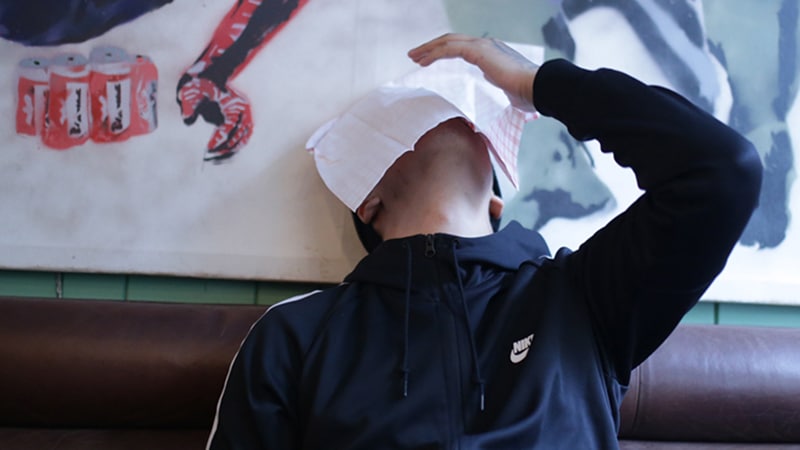 As with any profession, aiming to work with big platforms with a local-at-best following may prove tough, so getting your music videos on bigger channels may prove to be no more than a chain of unanswered emails for certain artists. But if the door you’re trying to get through can’t be barricaded off, maybe try another door and meet those people on the other side, as Izzie Gibbs did with JDZ Media, accumulating over three million views along the way, later working with more established channels. Despite his profile growing, Izzie Gibbs’ loyalty to JDZ Media, the home of a mixtape’s worth of his freestyles, has remained intact.

“When I first started, a lot of people didn’t allow me to go on their channel. I wouldn’t say they’re disrespecting me because I know how the ting works. I’d never done a freestyle before, why are you gonna wanna give me that time? I always look from another person’s perspective, if I was running a channel, somebody that doesn’t have no freestyle, nothing, why would I wanna give you the chance to hop on the platform that I’ve worked hard for, like your Link Up’s, GRM’s, SBTV’s, P110’s etc. They’ve had to work hard to get their subscribers, so it’s like quality control. A man’s not gonna go out of his way to record me, when he could record someone else who’s readier, but JDZ media were the one who took that risk” explains Izzie, continuing with:

“When I was 16, I gave the guy at JDZ Media £10. I said I wanna do a freestyle and he was up and coming as well. He didn’t have half as many subscribes he has now. I said if I’m whack, keep the £10, at least it’s something. So I did the freestyle and people were saying it’s sick, it was a ‘Spitfire’ over the Dot Rotten ‘Talkin da Hardest’ riddim time ago on his old channel, before he has to start again. Because he gave me that chance and let me come and hop on his platform, no matter how big I get or how many views I get, I’ll always hop on JDZ, like forever”. 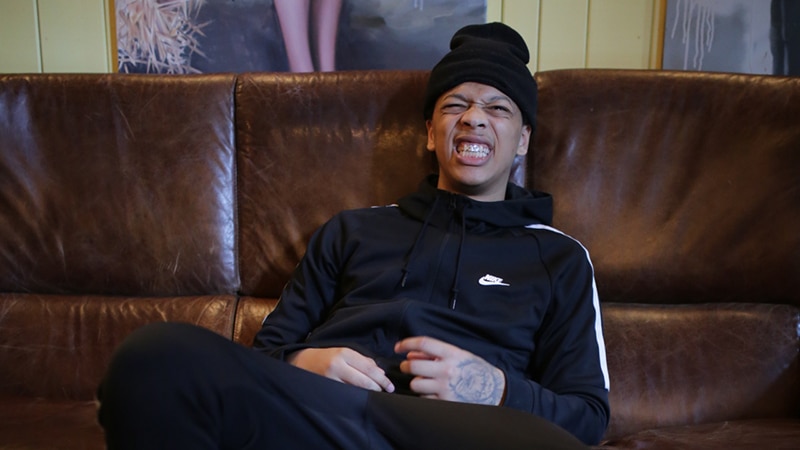 After releasing a fair few JDZ freestyles, naturally, Izzie Gibbs became known mostly for his freestyles, but in Justu, his anime-themed second EP, we witnessed progress from his first project, Project X, a sign of a growing artist rather than just a freestyle-rapper. ‘Justu’ means technique in Japanese, referring to the supernatural technique and skill of a ninja, and as Izzie explains, that motto definitely isn’t lost on him.

“When I used to kick ball, I was one of those yutes that would stay behind after training to train for another hour or two. Man was training on Monday, playing a game on Wednesday then training again until Friday. I used to kick ball for Corby Town then Kettering Town, so I was playing academy football against teams like Aldershot, Watford, and other academy teams, training week in, week out. I was always staying after training to brush up on my skill, so that’s how I treat music now. I super gotta go in.”

Among the features on Jutsu was Big Narstie on ‘My Life’, an artist Izzie credits as a huge influence on his career: “I met his little brother in ends and he must’ve let Narstie know about me, so big up him. I was supporting him at the time at one show, then he invited me to his launch parties when he was releasing EP’s like Pain, so that’s how I met him. It was sick working with him, he just took me on like his little brother, he brought me out to shows. Before I started getting my own shows, Narstie was bringing me out to shows himself, it was mad. He’s a G. The first show I did with him was thousands of people at one festival called The Diver, he was like yeah just come through. So props to him because he brought me out to bare shows and gave me a lot of advice. He’s already trying to guide me in the right direction, so that’s my bro.” 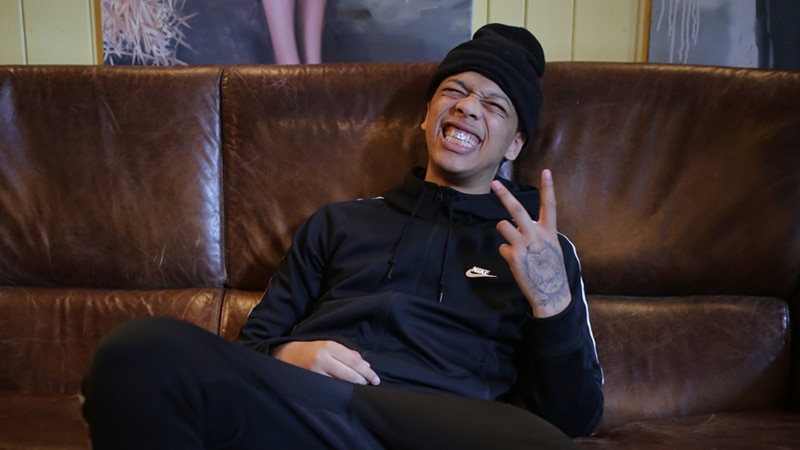 Izzie Gibbs is now a name a lot of people will know about in the grime scene, someone whose unapologetic rudeness is hard to forget, but that scatty, f**k-everyone flow morphed into something slightly different in his ‘Mad About Bars’ freestyle, as we saw a rare variety of flows from Izzie Gibbs, which proved to be one of the more popular releases from the series, raking in close to 400,000 views.

“The ‘Mad About Bars’, I remember Mixtape Madness must’ve shouted me and said ‘we see you’re going in and we’re doing a series where we’re gonna put on more established artists. To me, I was like rah, people are classing me as an actual established artist, so I’ve super gotta go in. Imagine I was trying to pattern my ‘Mad About Bars’ for time and I was like, ‘this aint good enough, this aint good enough’. But then after, I was in the studio and thought, I need to treat this like everything else and basically not give a s**t.

So instead of thinking I need to be super lyrical or go super in, let me just say s**t I’d normally say in a normal conversation. My close ones used to say I need to show more character in your music, because we know you’re a joker n that, but you come across like every other flippin road yute. So now I try to show my scatty side in my music, unless I’m doing a tune where, it’s not necessarily the best angle to go for. With the melodic ting, I freestyled most of that, I just sung and thought this is the perfect time to let people know I can do other s**t, n show there’s a variety of things I can do.” 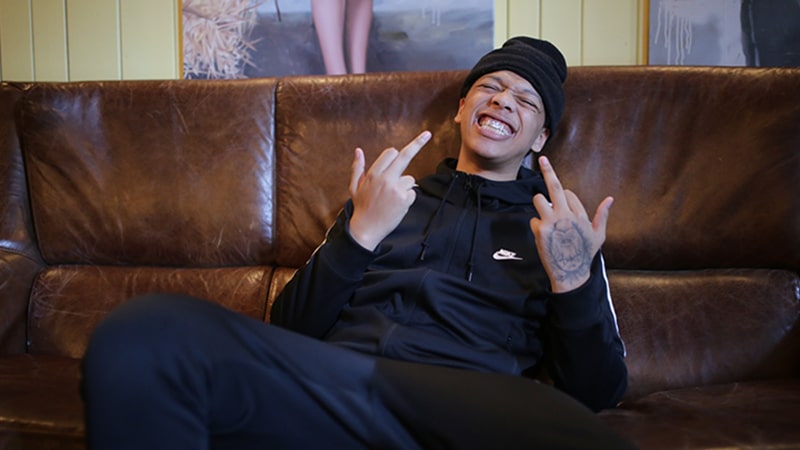 With an ever-growing list of feats, including winning an UMA Award in 2016 for Best Newcomer, being touted as one to watch by Stormzy, two Fire in the Booth’s, two EP’s, endless freestyles and a growing fan-base, things are shaping up nicely ahead of the release of his third EP, Yin Yang, due for release on June 23. The title hints at another anime-themed concept whilst the track-list reveals features from Big Narstie, Tremz and Young T & Bugsey, so I asked Izzie to talk me through what that project will entail:

“I’m like 10 different people. Today I could be super gassed, tomorrow I’ll just not want to talk to the world and just hate everyone, so Ying Yang is like light and dark. I feel like it’s relevant to so many people, everyone has their ups and downs, everyone has good times, bad times, different sides to their personalities whatever. With this tape, I just tried to cover all aspects of myself and make it relatable to other people, but also wanted to show them, with me being an anime fan, that I wanted to create a concept within a concept.

Every time I do an EP, they’re like six tracks, but I record like 50 tunes, that’s why I feel like the progression comes. I feel like a lot of people make a project and say ‘yeah I’m gonna do six songs or 10 songs, and they’ll literally only make 10 songs or maybe 14. I’ll make 50 tunes bro. It’s June now, so January to May, I recorded 88 songs. But I didn’t record all them songs to put them all forward, I’m doing it because I love music and I fully just wanna brush up my skills, so I when I do put something out, it’s proper.”

A relentless quest to perfect his craft is what’s fuelled the Northampton MC’s rise to prominence. Either that, or his desire to visit your baby mum’s house to not talk to her child and drink all the juice from the fridge, but either way, what’s clear is that Izzie Gibbs is Northampton’s rawest MC carving out a niche for an unapologetically confrontational sound littered with substance, which continues to get better and better.

All photos by @Zek.Snaps. Find more of his work on Instagram here.