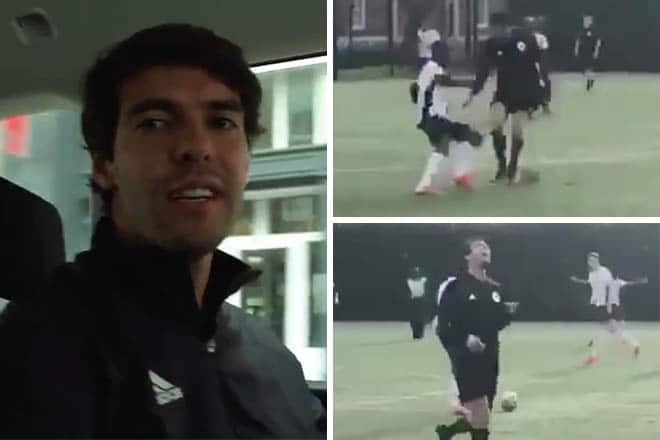 Posted at 00:05h in All Articles, News, News Main by Plugsville

‘Kaka nutmeg Hackney’ were among the trending topics on Twitter after the Brazil legend came to East London for a kick-about and ended up on the receiving end of a clever piece of skill.

The World Cup and Champions League winner filled in for a six-a-side team for Adidas and ended up getting megged by a left-back from Hackney Wick FC called Farid. To be fair to him, Kaka took it well, giving the young baller a hug afterwards to recognise his achievement.

Brazil legend Kaka came to Hackney for a kick about and got nutmegged 😅🤷‍♂️ pic.twitter.com/Q8FtSnFuLw

Speaking after the game, 24-year-old Farid, who filled in at the game last minute fresh from working a night shift, told The Independent:

“I have had no sleep. No one knew [Kaka] was going to be there. The ref was just going through the rules to the tournament and my friend tapped me on the shoulder and said ‘look who’s coming through the gates’.

“I don’t know what was going through my mind when I ‘megged him. It was crazy. He came back to me after and we had a little moment and he gave me a hug. I was in disbelief to be honest. Then my friend came over and he said he’d got it on video, then I got to see his reaction after I ‘megged him. It was a surreal feeling.”

Hackney Wick ended up losing 4-2 and the AC Milan icon scored a trademark screamer to help his side to victory, but nobody saw the words ‘Kaka nutmeg Hackney’ being one of the game’s main takeaways, alongside Twitter going mad for a clip of a Hackney Wick player demanding Kaka to ‘cut it back’ before scoring, which you can watch below:

Imagine having the audacity to scream at Kaka to cut it back. Kaka. As in Ballon D’Or winner Kaka. pic.twitter.com/3ueOBlEMqR