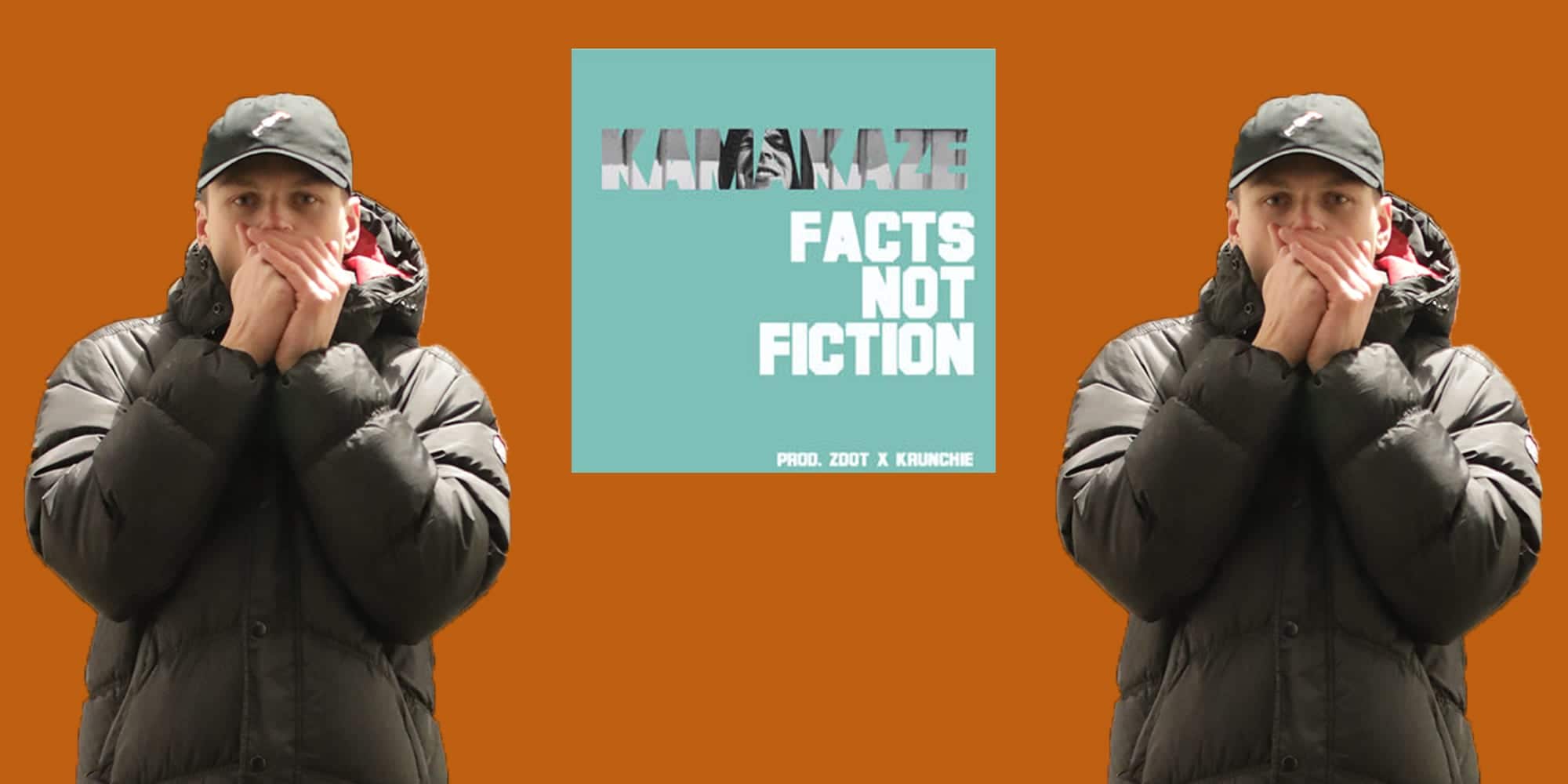 Posted at 16:08h in All Articles, News by Ajay Rose

Kamakaze’s Facts Not Fiction’s EP is a statement that he’s not an artist to sleep on and the project is arguably his best body of work yet.

Facts Not Fiction is a clear example of an aritst levelling up in a big way, with the help of Z Dot and Krunchie, the project’s only producers. The biggest takeaway is that this part-MC, part-footballer from Leicester is a definite problem, one which only continues to plug gaps and find ways to improve.

His last EP, Wavey Shirt Wednesday, saw Kamakaze depart somewhat from the lyrical grime flow people had come to know him for. On his latest project, those punchy, over-your-head punchlines are back and better than ever, this time delivered alongside a refined set of catchy hooks and shuddering grime instrumentals that bring out the best we’ve seen from him so far. Basically, better bars, hooks and beats all-round.

‘Comeback Season’ is the second track of project and provides an early indicator that Kamakaze has taken things up a few levels. The hook evokes a mosh-pit level energy while the futuristic-sounding grime beat keeps the pace fast enough for his bars to keep that mosh-pit going strong throughout. The bars are sick and the hook makes you want to wheel up the track. Kamakaze is performing at Outlook this summer, this is a track you can envision doing a madness in the late hours of the morning at some beach club on the Island of Pag.

Grime has taken something of a backseat in recent times as genres like trap, drill and the sound some call ‘afroswing’ have grown at its expense. On ‘Prayers’, Kam came to remind people grime is still alive and kicking, bringing elements of his rap-flow into things with bars like ‘your t-shirt it says cocaine and caviar/ my research it says low-pay and don’t have a car’, continuing later with gems like: ‘them man talk about nines and four fives/ but we both know it aint quarter to ten.’ The hook once again brings huge levels of energy, the type needed to evoke gun-fingers in a dance and turn a crowd upside down.

On ‘Spirits’, within seconds, you’re served with a dose of wheel-up worthy lyricism, showcasing the battle-rap side of his varied flow with bars like: ‘heard your girl went Napa for six years running/ and she’s going the next six years coming/ held nuff pipe but the chick weren’t plumbing/ meanwhile you spend six years bunnin’. The rest of the track is a three-minute onslaught of many more cleverly-crafted bars, all of which are tied together with another catchy hook.

Kamakaze had proven already he can bar, but on Facts Not Fiction, he takes those bars up a level and brings in a new-found array of hooks, allowing for more a complete offering, all while exploring a few different spaces as he does. Grime is the main theme, but there are slower, more techno-infused moments like on ‘Candlelight’, while ‘Far Away’ represents one of the first times we’ve seen Kam flow over the clear acoustics of Maverick Sabre.

Being a sick lyricist and someone who can make complete tracks are two different skills. A lot of artists can rap well but struggle to make coherent tracks that stick. Every track on Facts Not Fiction doesn’t fall victim to that curse. The influence of Z Dot and Krunchie, two established beat-makers with production credits galore, certainly helped Kam to refine his work and help him transition from lyricist to artist.

I bumped into Kamakaze on the tube the other day and when I spoke to him, I asked him which songs he’s going to shoot a video for next, and he said he designed the EP in a way where all nine tracks could be the next single. And he’s right. Facts Not Fiction is a non-skippable body of work, a head-turner that rubber stamps Kamakaze’s position as an artist you definitely can’t afford to sleep on.

Listen to Facts Not Fiction here: