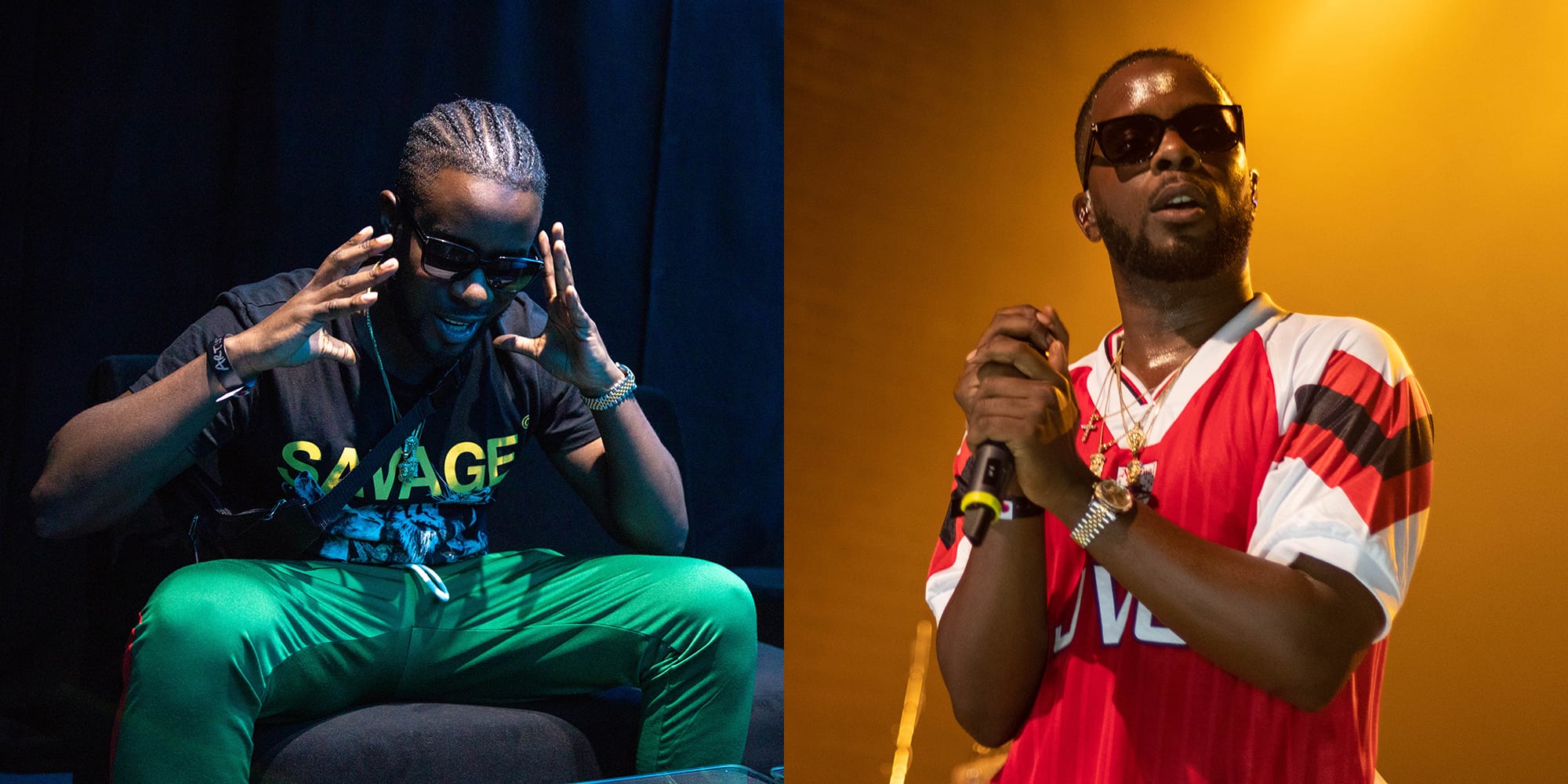 Posted at 15:07h in All Articles, Interviews by Jord Chesmin

Maleek Berry Interview – The monumental afropop artist owns a sound that only he holds a key to. Berry’s fusion of dancehall, bashment, afrobeats and RnB, laced together with a joyful delivery, has seen him sell out shows in different continents with ease.

For the best part of his life, his time was spent in London, but he lived in Lagos until he was six, alongside his paternal family. He found early inspiration from Michael Jackson and would imitate every move in front of the TV and was told his first words were ‘Michael Jackson’ (he’s still not so sure if that’s true). From there, music was always going to be his forté.

At the age of just 15, Maleek got his first taste for creating music when him and his friends formed a rap group in his local church. He recalls rapping over legendary old-school hip-hops beats, that was, until he had a lightbulb moment. He subsequently downloaded FruityLoops to create original beats and went a step further by teaching himself how to write hooks for his rap group, leading to performances in churches across London. 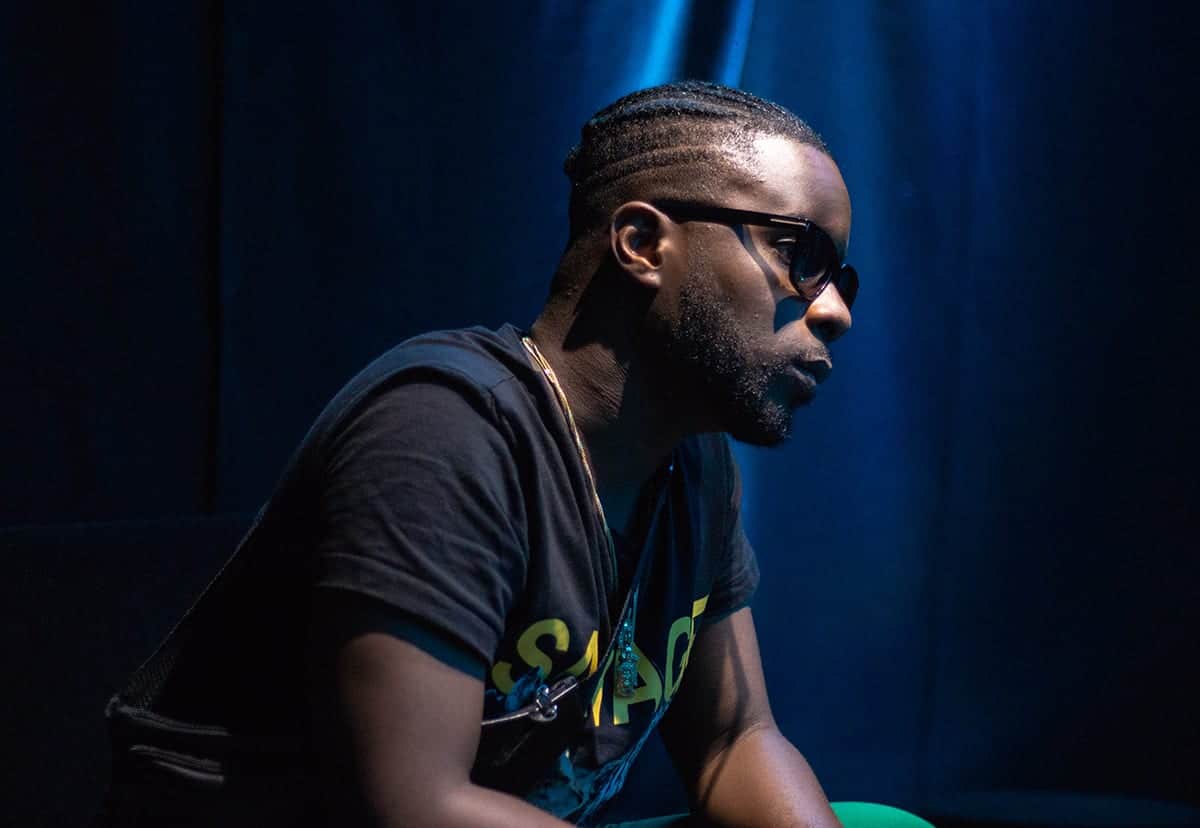 In secondary school he realised that all of these different sounds, namely, reggae, garage and dancehall, would add layers to his musical character. As explained on his TEDxTalk, every artist that he had ever come across would praise his versatility as well as his distinct sound.

From that moment he felt his purpose was to bridge the gap between the America, the UK and Africa – and that is exactly what we’ve seen since the inception of his wide-ranging sound.

The last few years has seen the release of two successful EP’s, as well as numerous popular singles, allowing him to keep things lit in anticipation of his debut album, expected to drop at some point in 2019.

Plugsville spoke exclusively with the multi-talented singer and producer to discuss his career so far with Jord Chesmin. All pictures used in this Maleek Berry interview were taken by Toju Bello. 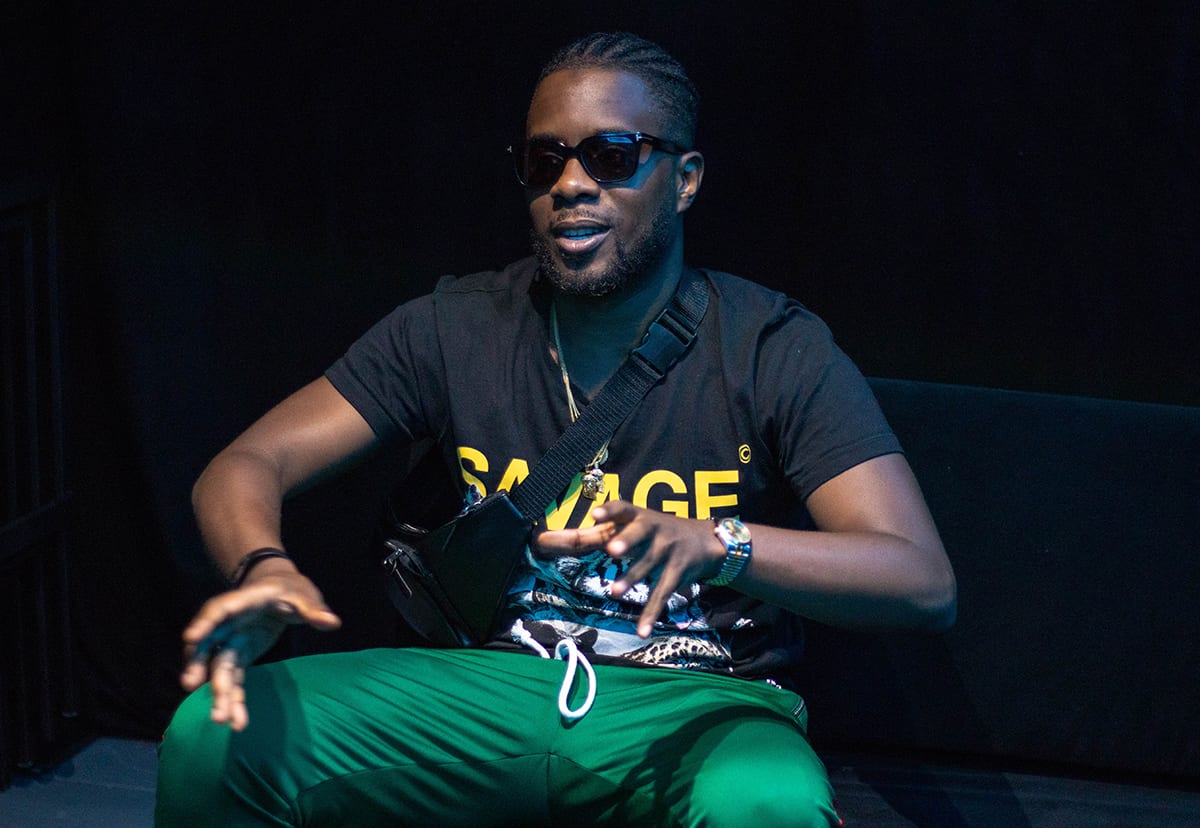 Are you still breakdancing to Michael Jackson?

You know what, in the comfort of my own bedroom, I do that – I still do. Not on stage though (laughs).

Youth empowerment and artist development is a dream you’ve been wanting to accomplish for a while. Do you feel that you’ve achieved what you set out to achieve yet?

No, no, no, no. Obviously with youth you can inspire anyone at any level, but in terms of artist development I feel I definitely need a lot more experience, see a lot more [things] and go a lot more places [in the industry] and develop myself. There’s so many young producers and young writers that even now I’m mentoring them, and that’s youth development. That’s how I’m starting off before I go big when the time is right.

If you could describe yourself and your music with a type of berry, what berry would it be?

(Draws for a container full of strawberries)

Ahhhhhhhhh… He backed out the strawberries ya kna! [Laughs hysterically]. This is my post-performance meal. Thank you, God bless you. You could’ve brought some Jollof but … 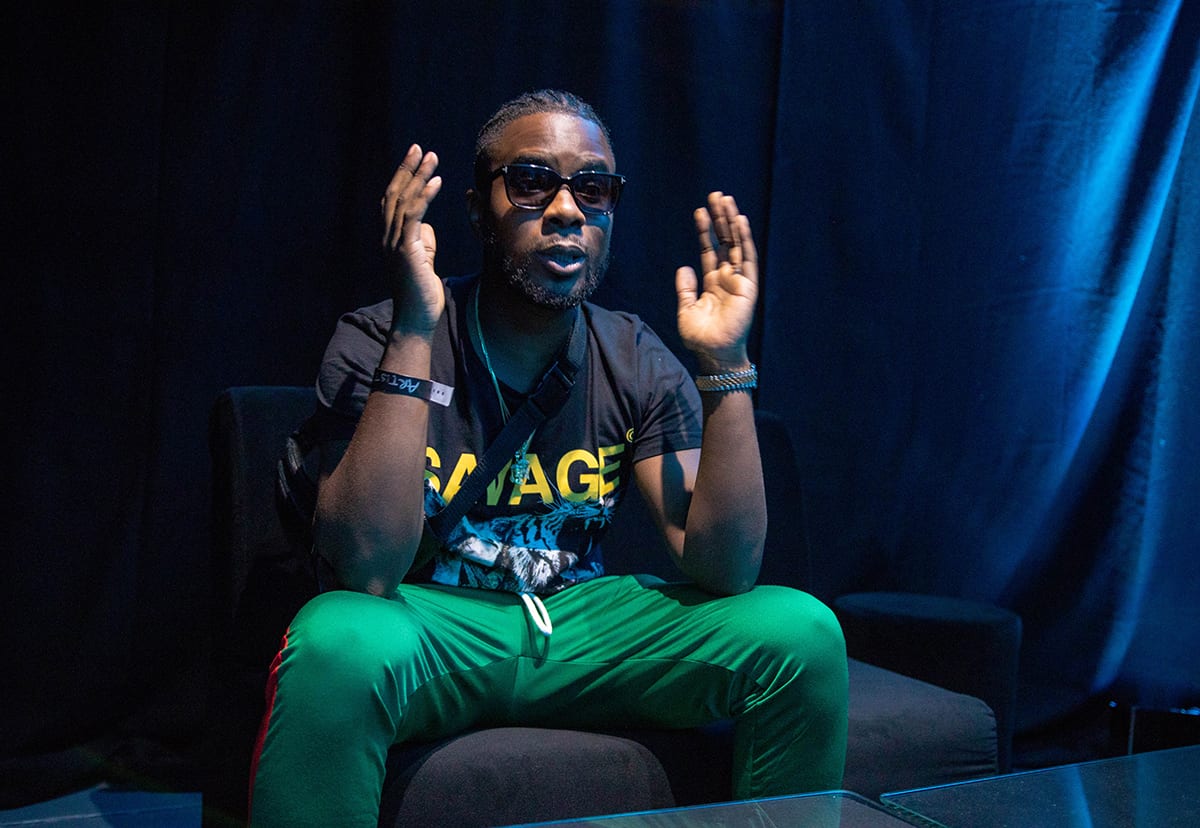 Where did your passion for producing come from?

Ever since I was young. It was when I had a rap group in church and I was still in school. When we first started putting out records we were rapping over Jay-Z and Nas beats and some uncle in church pulled us up and was like ‘I know what beat this is’ …  I think it was an ‘If I ruled the world’ instrumental [referring to the beat his rap group used]. The uncle pulled us up and was like ‘what are you guys doing? Don’t rap in church; go and learn how to make your own beats’.

I ran with it, I got Fruity Loops and never looked back. I just started to teach myself how to produce and that’s where the passion for producing came from. I went from a beat-maker to a producer to a songwriter, and now we’re here.

You’ve had connections with Wizkid and Davido since the start of the decade. Can you explain the power and importance of networking?

Yeah man, networking is a beautiful thing. I’m not particularly good at it though because I still remember the first time I was with Davido and I met Wiz. I think it’s a south London thing; we were like ‘let’s stay over there and not say hello’ you know what I mean? [laughs]. I didn’t really say anything and it was actually someone else that said ‘yo play him [Wizkid] some beats, play Wiz some beats! He’s gonna want to hear that’ and I was like ‘Ah, I don’t know’.

So I walked up to him and was like ‘yo bro, I’ve got beats to play you’ and he was like ‘yeah man!’ and from there he jumped on like three of my beats and the rest is history. Through him I started getting more confident and networking and started spreading my wings. There’s a saying, ‘your network determines your net-worth’ so who you rub shoulders with is very important. You just never know what a conversation can lead to. This moment started from a conversation.

Berry’s Room is something that you hold very close to your heart. Is it a place or a mindset and what does it mean to you?

Right now it’s a [record] label, an art direction company and it’s literally just boutique right now, [it’s] small but I’ve got big dreams. I want to take it across the world but right now [Berry’s Room] is where dreams are being birthed.

[Berry’s Room] came from me studying my craft and everyday making five beats, like Kanye said [make] five beats a day’ for how many summers – like I was doing that, every year and one day I just thought ‘Berry’s Room’ and that came to life and now it’s actually bigger than that. We’re taking it everywhere. 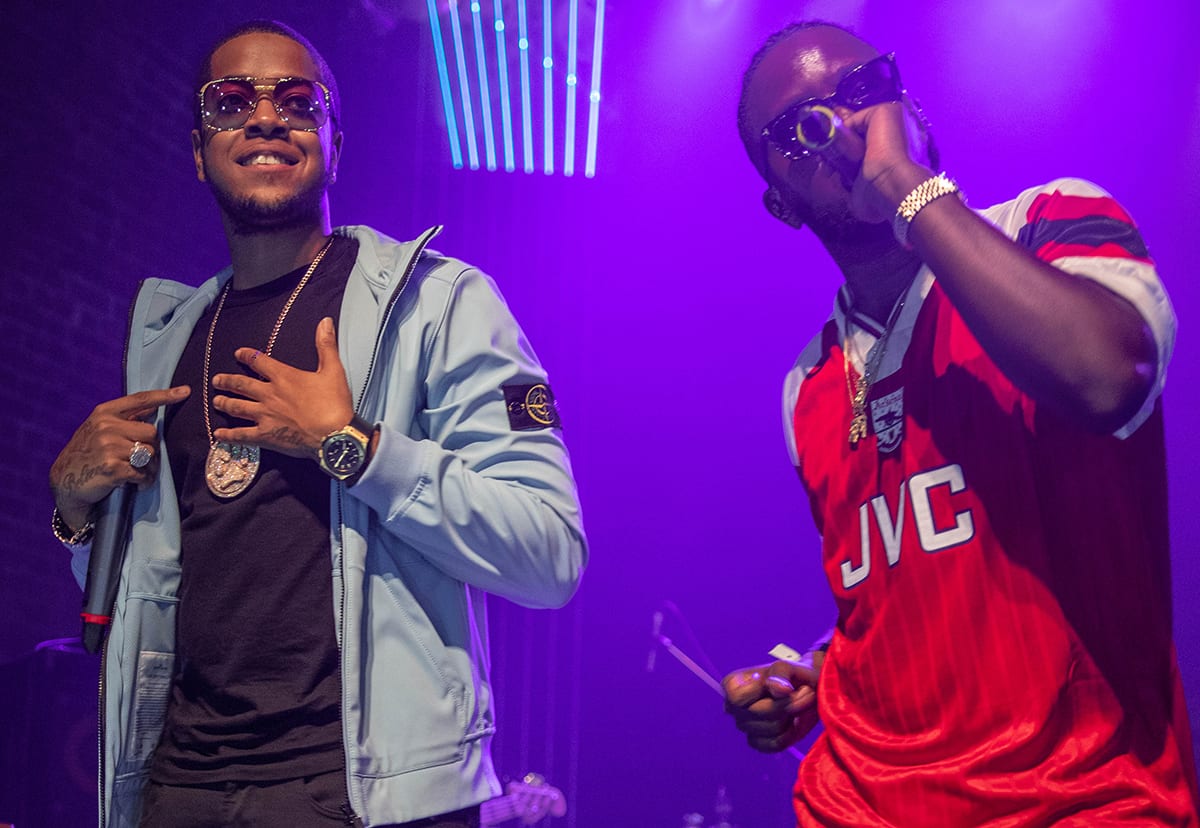 Speaking of going across the world, you’ve sold out shows in Norway, Denmark and Germany. Describe that feeling of what was once just an idea, going global.

It’s an amazing feeling but I just don’t like dwelling in it too much. The people around me and my close friends are always telling me to live in the moment a bit more but I’m always onto the next one. Once this goal is ticked off how can I write ten more goals that’s going to top [the previous one]. It’s a crazy feeling. I read The Alchemist [by Paul Coelho] and I took that book very very serious, you guys should check it out. That book changed my whole mindset.

Two years ago you released The Last Daze of Summer. At the beginning of this year you dropped The First Daze of Winter. What can we expect, project-wise, from yourself in future?

The [debut] album’s coming next year, before then I’m just going to be dropping singles. The fans are saying that they want another EP but I think we’re going to go straight to the album – who knows? We’ll see. But right now I’m just enjoying myself.

We’re getting close to December and that December period back home in Africa is like turn-up season! So everyone’s trying to drop hits so it’s a really exciting time now. But yeah next year the album is coming. It’s going to be serious. It’s gonna be a serious album. I’m coming to make a point, to make a statement. Not just in the UK but everywhere.

Any guest appearances lined up for the album?

Not as of yet, but the thing with me is that I like to create amazing songs before I think about ‘Oh yeah let me get this person and that person’. ‘Eko Miami’ was done before Geko, and ‘Love U Long Time’ was done before I got Chip on it.