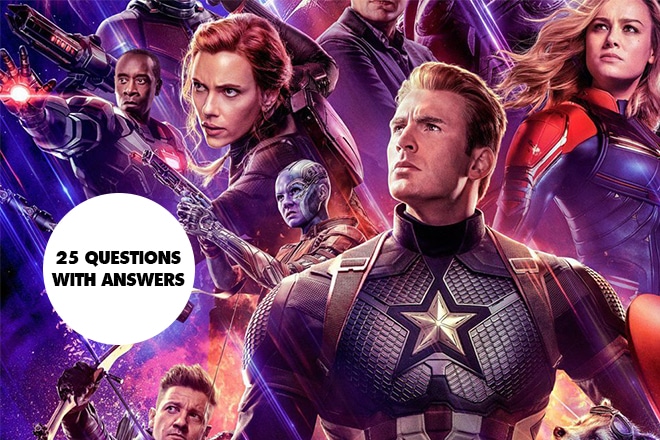 Posted at 18:19h in All Articles, Long Reads, News by Plugsville

As the coronavirus crisis brings life to a halt, virtual pub quizzes have stepped in to fill an entertainment void, so we’ve put together this list of 25 Marvel facts to help you out.

We found that there weren’t too many free quizzes available with answers, which is why we made our own. The list contains numerous Marvel Cinematic Universe (MCU) facts written as questions with four multiple-choice answers. The correct answer is highlighted in bold. All you need to do is send this article to the quizmaster and you’re good to go.

Here are 25 mind-blowing Marvel facts for you to use during your next virtual pub quiz:

1 – Which movie did Thanos first appear in?

2 – Who is the highest-paid actor in the MCU with over £60m in career earnings from his work with Marvel?

3 – How many films has Robert Downey Jr featured in the MCU as Iron-Man?

4 – Which soundtrack sold over one million copies?

5 – Why didn’t Captain America eat at the shawarma restaurant at the end of The Avengers?

A = Ate McDonalds for lunch so he wasn’t hungry, B = Was wearing a prosthetic jaw, C = Recently had tooth surgery, D = Doesn’t like shawarma’s

6 – Why does Pepper Potts walk around Stark Tower barefoot?

A = Forgot her socks, B = To make Iron-Man look taller, C = Spiritual reasons, D = The floor is heated

7 – What were the production costs for Avengers: Endgame?

8 – How many cameos has Stan Lee made in Marvel films?

9 – Who is the only actor in the MCU to feature as the lead and also get a writing credit?

10 – Who was initially offered the role of Thor before Chris Hemsworth?

11 – Why does Nick fury wear an eye-patch in a lot of Marvel films?

A = Injured in battle, B = Cooking accident, C = Cat scratched his eye out, D = Accident on set

12 – In which film was the region of Wakanda first introduced in the MCU?

13 – How long did it take Dave Bautista to get ready for the character of Drax each day?

14 – Which superhero is said to be the wealthiest character in the MCU with 5x more wealth than Iron Man in second?

15 – How long did Baby Groot’s dancing scene at the start of Guardians of the Galaxy 2 take to put together?

16 – Which three Marvel films are set within the same week?

17 – What is the news station called that is used throughout the MCU?

19 – What is the only film in the MCU where the main actor plays both the main hero and main villain?

20 – Which of these Marvel films were nominated for Best Picture at the Oscar’s?