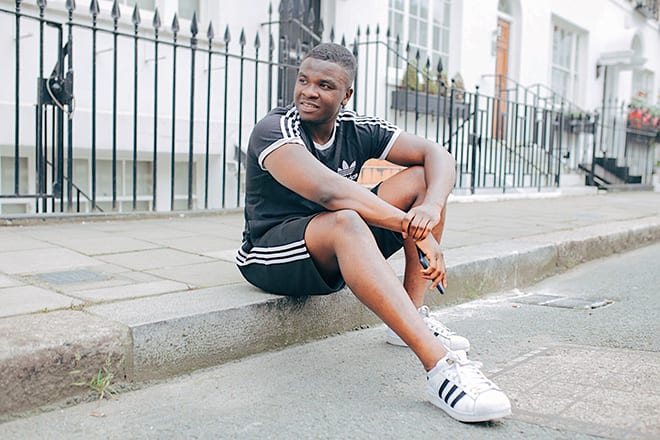 Posted at 14:48h in All Articles, News by Ajay Rose

When Plugsville interviewed Michael Dapaah in June 2017, his stats were booming. Views were piling up, videos were being shared and the non-stopping stream train that has become Big Shaq’s ascension towards superstardom, was just leaving the platform.

Fast forward a few months and Michael Dapaah’s numbers are now out of this world. 150m YouTube views, 1.1 million followers and more than 500,000 subscribers on YouTube, to be precise. That stream train I mentioned has turned into a spaceship and now Dapaah is flying around the world with a top-5 charting single, a bunch of people who seem to critique the entire thing.

Such critiques describe his achievements as being fluke and have been reduce him to being no more than an overnight success. His name trended on Twitter on Tuesday for this very reason – some people say it’s undeserved, prompting a bigger wave of respondents defending him.

Shaq goes through YouTube comments from his Fire in the booth ??with @noisey Full link in Bio ???? #mansnothot Out Now on all digital platforms

But here’s the thing, Michael Dapaah is so far away from being an overnight success, there’s not really much of an argument to be made. At the time of our interview, he had put out 60 videos on his Instagram page and four of #SWIL’s six web-series episodes. Let’s suppose music videos are three minutes long by default. One music video = five Instagram videos at 60 seconds each. 60 videos is the equivalent of 12 music videos worth of content, and that’s just the content from January – June. Those videos piled in five million views on Instagram page alone, with plenty more coming in the form of reposts.

We only have accurate data on his statistics from January-June, but between then and when ‘Mans Not Hot’ actually dropped, there were plenty more videos knocking around too. The Fire in the Booth dropped in August, with the single arriving a month later. So that’s at least 60 videos and six 30-minute YouTube videos worth of ‘overnight success’.

I can’t think of many people in 2017, musicians, comedians or other, who were that consistent. Every time a video died down, he put something new out. When he had a chance to reach a new audience, he took it. When American superstars wanted in on his hype, he devised situations which best allow that to happen without killing off the product, as we saw his ‘beef’ with Shaquille O’Neal.

Back in February 2017, Michael Dapaah had just 10,000 followers on Instagram and had no real way of knowing if this whole comedy thing would ever work out. Now he has over 1.2 million, with many from different countries across all age ranges. That didn’t come overnight. That came because Michael Dapaah took calculated risks, was consistent and when he had a chance to take things to a new level, he took it and deservedly reaped the benefits.

I’m not entirely sure why the work of Big Shaq has been compared that of rappers either. Dapaah is a comedian and content creator who made a rap song, not a rapper whose entire life is dedicated to music. If a musician put out 60 short videos or 12 music videos in the space of six months, you could argue that their buzz would be considerably greater too. Dapaah’s work exists in a grey space between music and comedy, but at the end of it all, it’s a comedian creating a song for one of his characters. It’s a song by Big Shaq, the character, rather than Michael Dapaah, the musician.

From the outside looking in, Michael Dapaah’s success has shone a light on what else is going on in the UK, like it or not. More eyes are on the scene and the likelihood that a non-fan engages with the UK urban scene increases as ‘Mans Not Hot’ gets played in clubs around the world from London to Lagos to Seoul. A similar thing could be said for ‘Top Boy’ or Drake’s ‘KMT’ smash from More Life with Giggs. Big moments bring more eyes, and ‘Mans Not Hot’ was perhaps the biggest moment of last year.

Michael Dapaah is one of the biggest pillars of consistency. He’s so consistent and on the ball with his content creation, that’s it’s non-sensical to call him anything else. As discussed, Dapaah released the equivalent of 12 music videos worth of content in six months, then followed that up with a heap more, and then more after ‘Mans Not Hot’.

On a micro level, he works hard to document all his movements. He doesn’t just do something and let it fester online, he collects all the relevant media and puts together highlights for his fans. After his performance at Spotify’s #WhoWeBe event, Marv Brown had put together a slick highlight video in less than 24 hours, as he also did for his first ever live performance of ‘Mans Not Hot’ at Suspect’s headline show. Do all the people calling Dapaah this, that and the other, bring that same sense of urgency and dedication to their work?

Regardless of your opinion on ‘Mans Not Hot’, the work that has gone in to elevate Michael Dapaah to such a position means he is everything but an overnight success.