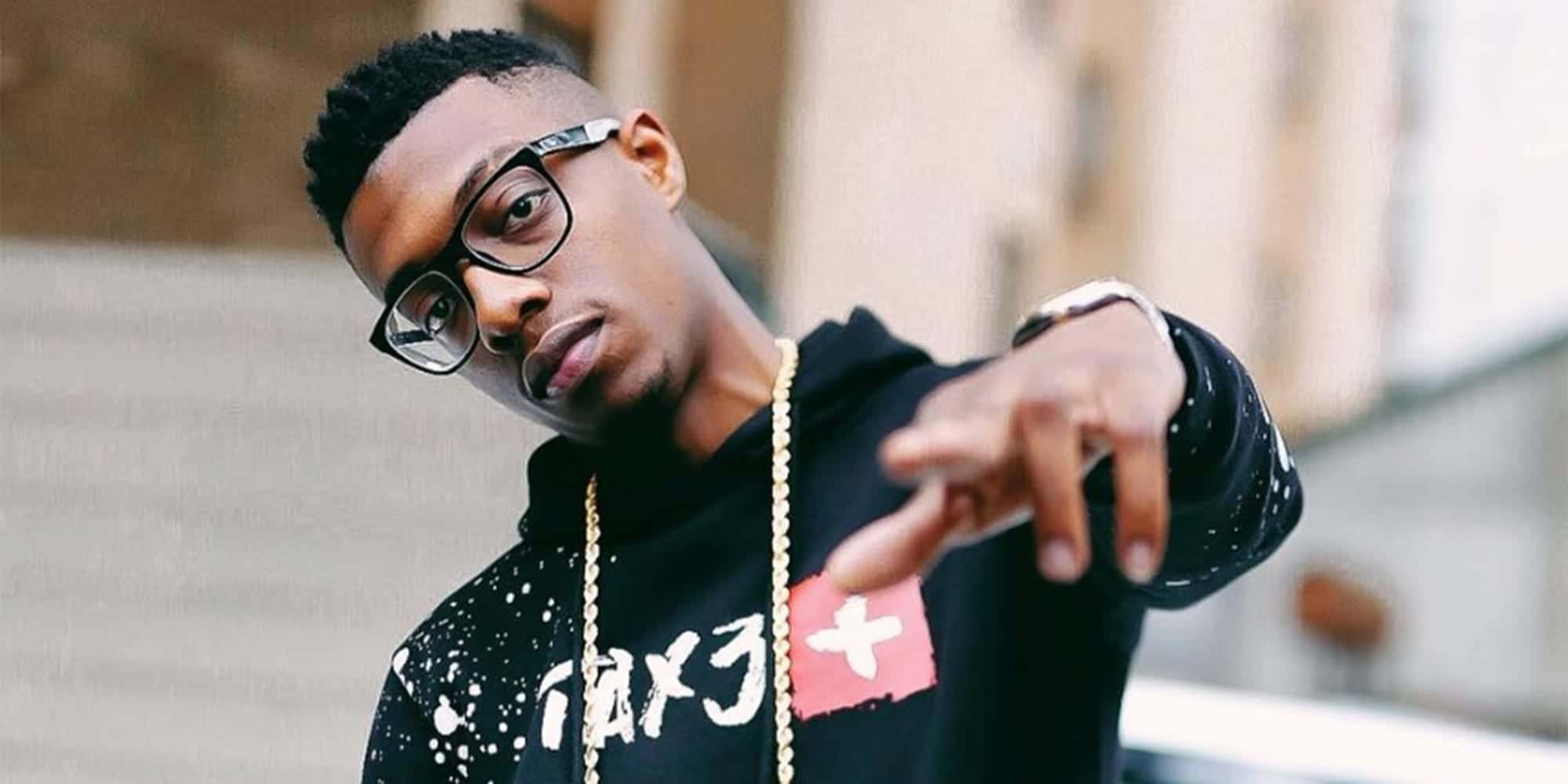 Posted at 01:58h in All Articles, News by Plugsville

Flavours of the month are discussed too. Waiting for your barber to give shape-ups to four other people just so you can get that prized trim is hardly someone’s idea of fun, so recent success, club bangers and the like will be on the agenda. But those conversations, much like the temporary nature of what’s being discussed, are short and forgettable. The thing that really evokes discussion, is if the artist is really ‘that guy’.

Krept and Konan are ‘those guys’. Nines also ranks, as well as a few others. And soon, we will welcome MoStack and his gangster with banter flow, into that brigade.

‘No Buddy’ saw him breakthrough in 2014, offering the first of many insights into his effortless ability to deliver a rap sound that is cheeky, engaging and capable of attracting a large audience. Looking back, it laid down the blueprint for what would follow, namely, a unique dose of gangster with banter rap that’s gangster enough for us to believe and cheeky enough to help make otherwise non-digestible topics, digestible.

‘I’ll shoot a friend for my brother, I’ll shoot my dad for my mother’ raps Stack in ‘No Buddy’, and nearly four years later, that formula of unfiltered realness, is yet to fail him. 2015 saw him collaborate with Hus on ‘So Paranoid’ and also their iconic Westwood Crib Session, before he ended the year with the release of ‘I Do’, another instalment of provocative, real rap.

MoStack never tries to present himself as a flawless rapper. Nor does he try to subscribe to some industry image. He says what he wants knowing that realness connects with people.

Heading into 2016, he dropped Gangster with Banter, a stacked 21-track project, that might not have similarly gaudy numbers like his music videos, but if you take that project in, it was clear he was onto something. The project’s notable tracks include ‘I Don’t Need No One’ and the Outro, but overall, Stack proved he can produce a lengthy body of work in a time where most artists release five-eight track EPs.

You might describe the second half of 2016 as the time where MoStack really started to generate heat. In last four months of that year, he raked in over 13 million views from ‘Liar Liar’, ‘Liar Liar Remix’, ‘Let It Ring’, and ‘Block Popping’, pushing his view total for the year to around 20 million.

Only five artists recorded more video views in 2016 than MoStack, so naturally, you’d think that those popular releases would form the basis of the High Street Kid, his next project. Only, Stack boldly opted to discard all old material for High Street Kid, which basically meant, he’d essentially cast half a project’s worth of bangers, knowing he had even more heat to bring to the mix.

Very few artists, if any at all, would disregard such big anthems knowing the commercial potential they carry. You don’t disregard your current hand unless you’re absolutely confident that something better is on the horizon. And it wasn’t one banger either, it was three and a hugely popular remix.

High Street Kid was a project tinged with the sounds of the genre some call ‘afro-swing’, and saw Stack swap his previously gritty beats for more digestible, mainstream-sounding instrumentals, but in doing so, he didn’t compromise anything. He successfully grew his sound in another space, still delivering doses of arrogant but real rap.

The decision to cast aside popular hits as album throwaways paid off, as MoStack charted at #19 with his High Street Kid mixtape and the project helped him reach new audiences. One of the barriers between rap music and the masses is relatability. MoStack knows how to avoid that problem.

‘Screw and Brew’ and ‘Ussy Ussy’ are the project’s biggest singles, two tracks which captivate a mainstream audience without compromise. Elsewhere, tracks like ‘Explore Ya’ and ‘You Buy Balenciaga’s’ again display how Stack never needs to tone it down. That cheeky realness is just fine.

Following that project, MoStack finished 2017 as arguably the best feature artist in the UK that year. Everything he touched, was a straight banger. Two features on J Hus’ debut album Common Sense kicked things off nicely with ‘Fisherman’ and ‘Mash Up’, one of the album’s more slept-on tracks. On top of that was ‘Celebration’ alongside Not3s, ‘No Words’ alongside Dave, which went gold, and two features on single releases from Steel Banglez in ‘Bad’ and ‘Money’.

Some of the biggest songs from 2017 came from MoStack, who ended the year with sold out, nationwide ‘High Street Kid’ tour, adding to a string of festival performances this summer, including Wireless Festival and We Are FSTVL.

Which brings us to there here and now, 2018, the year MoStack completes his transition from popular artist into fully-fledged rap superstar.

The thing that will propel him into that space? His debut album. We already know there will be a maximum of two features on that project. Given his close relationship with Steel Banglez, we also know his beats will be on the tape and that the production will be first-class.

In an interview with Complex, Banglez said MoStack, along with Mist provided him with the biggest hits of career since ‘Go Down South’ in 2012, continuing with:

“And then I found MoStack. I did his whole mixtape, Gangster with Banter—I recorded the majority of that. Mo was on the block, and he was like: “Bro, you changed my life!” I used to pick him up and bring him to my house every day—same thing I used to do with Cash. Then I heard Mist; I brought him to London, teamed him up with MoStack, and it just started happening.”

Of MoStack’s current bangers, Banglez produced ‘Celebration’, ‘No Words’, ‘Screw and Brew’, ‘Fisherman’ and the majority of Gangster with Banter.

That combination can’t be slept on. Banglez is providing the and MoStack is scoring goals time and time again, making for a win-win formula that has seen a consistent slew of bangers in the past few years. So expect to see some of the finest beats around from Banglez and the other producers Stack enlists.

MoStack brings other superstar qualities to the table too. He is stylish, to the point where wearing glasses is made to look like a cool accessory, rather than a necessary visual aid. His dress sense stands out and the way he ends tracks, with a freestyle medley of bars that follow no real pattern, always reminds of his sauce, because he’s simply doing what he wants and manages to make it sound highly enjoyable.

If you had to define his sound, gangster with banter sums it up best. But then, many could fit that description. MoStack can deliver that gangster sound to a mass audience without needing to compromise.

Too gangster and it’s not mainstream enough. Too many jokes will lead to suggestions that he’s not really about that life. Somewhere in the middle of that spectrum is MoStack. Gangster enough for us not to question, cheeky enough to entertain and capable of translating that behind carefully-selected beats to make banger after banger. With his debut album, the rapper from Hornsey has a chance to deliver an iconic body to bring all of that together in its best form yet.

So at the barbers, when someone mentions MoStack, we won’t be discussing short-term success anymore. Conversations will centre around where he ranks among the UK’s very best, rather than his ranking among the generation of ‘next up’ rappers. His gangster with banter flow is ready to take off very soon, and when that happens, MoStack will become one of ‘those guys’.