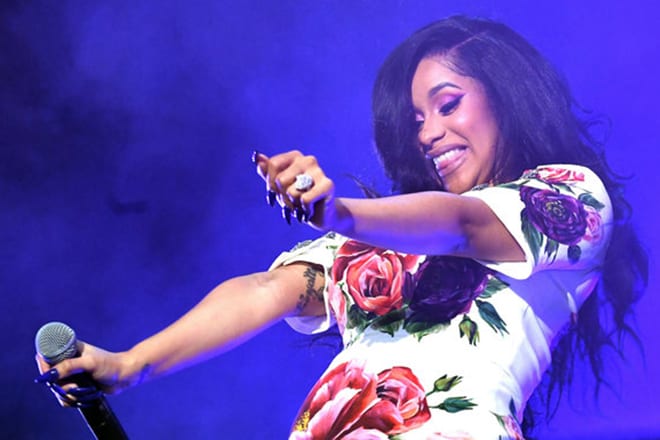 Posted at 01:51h in All Articles, News by Ajay Rose

A report from Citigroup shows that musicians are getting a bigger share from their music, as they only took home 7% in 2000, with the rise in revenue attributed to more revenue from concerts and live performances.

Artists are also not making huge money from streaming revenue, as labels and other intermediaries take a considerable cut before the artist does. Record labels and publishers took home around $10 billion (23%), nearly double the amount earned by musicians.

The report also highlights that the growth of the internet has worked to the music industry’s detriment, but the introduction of smartphones has been positive. 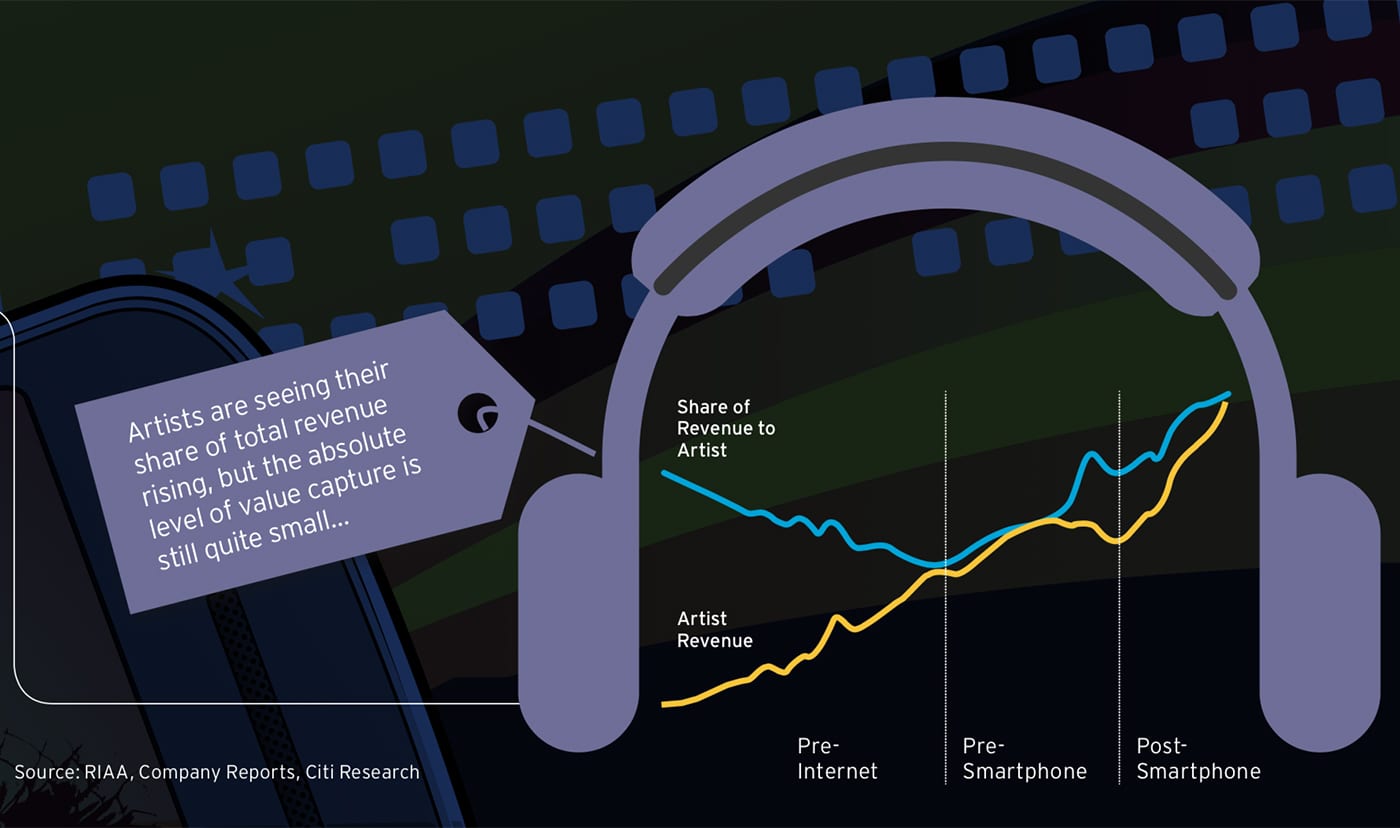 This is because the digitisation of music meant less physical sales, but the ascension of smartphones has catalysed the growth of streaming platforms, creating new revenue streams to offset the loss of physical sales and diminished impact of radio play.

Streaming platforms were designed with a similar revenue model to radio stations, in that the revenue earned per play on a streaming service is round about the same as radio. But unlike radio, there is no incentive for consumers to buy new music, as they can play the song over and over on Spotify or Apple Music, helping to explain why there is a greater focus on revenue from live performances in today’s industry.

The report also highlighted three ways in which Citigroup believe the music industry can grow. As well as horizontal and vertical integration, Citigroup proposed a situation where distributors like Spotify and Apple Music become record labels:

“Third, we could see organic forms of vertical integration. That is, existing web-based distribution firms could organically morph into music labels (by targeting younger, less established artists). This would allow artists to capture more of music’s value while allowing Internet-based music distributors to capture profit pools currently earned by the music labels.” 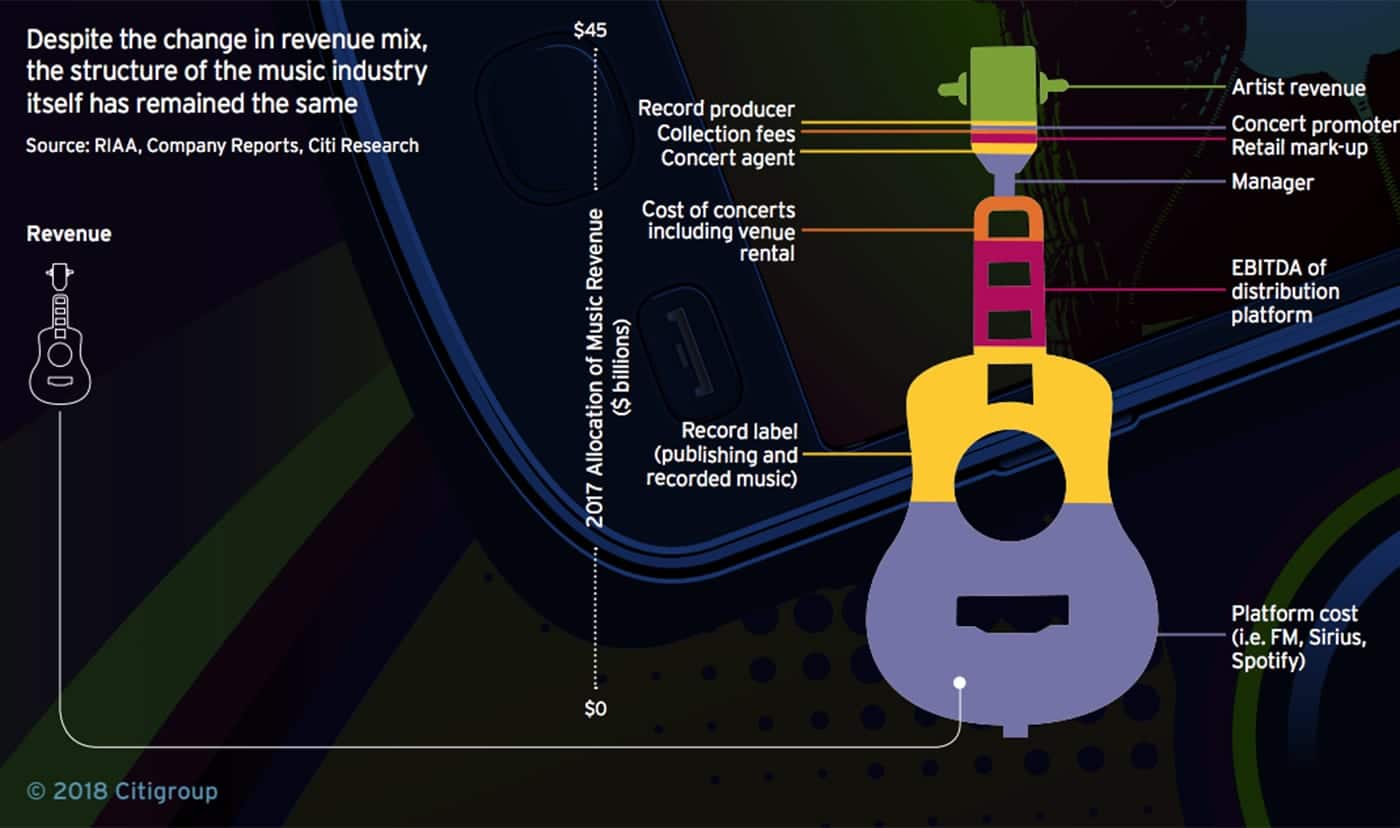 Kevin Brown, CEO and founder of GigRev, provided further insight with regards to the small percentages artists get from streaming:

“It is important to remember that 99% of all plays on Spotify go to 10% of songs. This means 90% of artists get little or nothing.

“This has forced new artists to be a lot more innovative. A good example of this is the U.K. Grime scene. One artist I was talking to makes most of his money from influencer marketing on Instagram. He makes virtually no money from selling music, but rather does it from sponsored posts to his ~1 million followers on social media.

“You may get discovered but you still need tens of millions of plays to earn a living and loyalty of fans is not the same as plays. It’s about creating a community and monetizing this.”