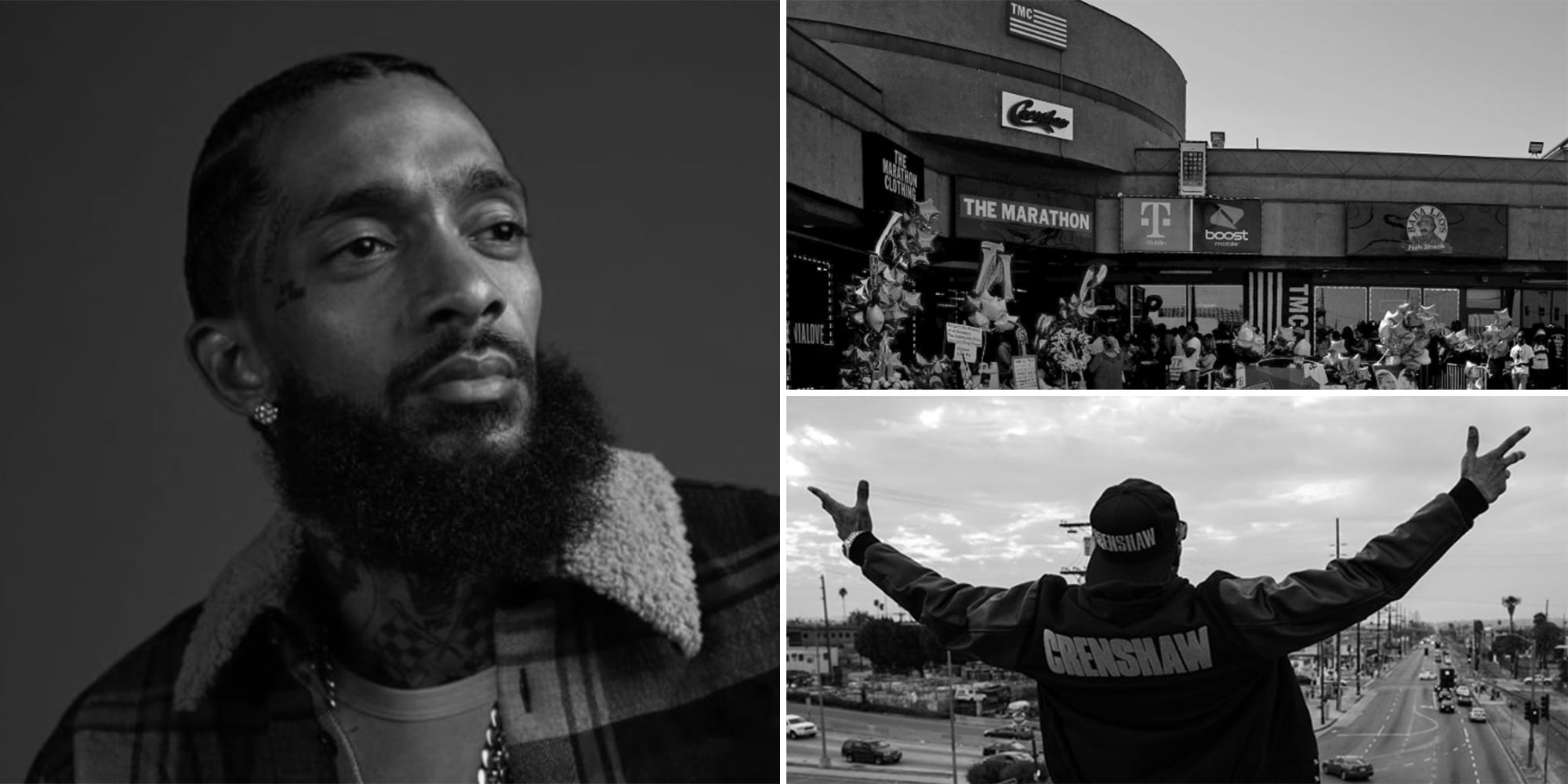 Posted at 19:06h in All Articles, News by Kwaku Dapaah

Nipsey Hussle Legend -- The untimely deaths of hip hop artists due to violence is an occurrence that has tarred the most popular genre in the world -- among many, the two most prominent examples of these being the murders of Tupac Shakur and his popularly touted nemesis in the media-fuelled East Coast vs West Coast rivalry, Notorious B.I.G.

However, for the youngest subset of the millennial generation, the emotional attachment to the loss of both of these immortalised artists is a result of exactly that, their persistent features within the discourse of hip hop history. We were not old enough to witness the rise and fall of these artists in real time, but rather through the lens of curated and posthumously consumed content; albums, documentaries, and interviews, made available on the digital platforms that we were native users of.

Many other rappers have met a similar fate in recent years. XXXTentacion, Bankroll Fresh, and Chinx were all murdered in their hometowns within the last five years, but for many of us, the murder of Nipsey Hussle on Sunday 31 March 2019 is one that cuts a little deeper. 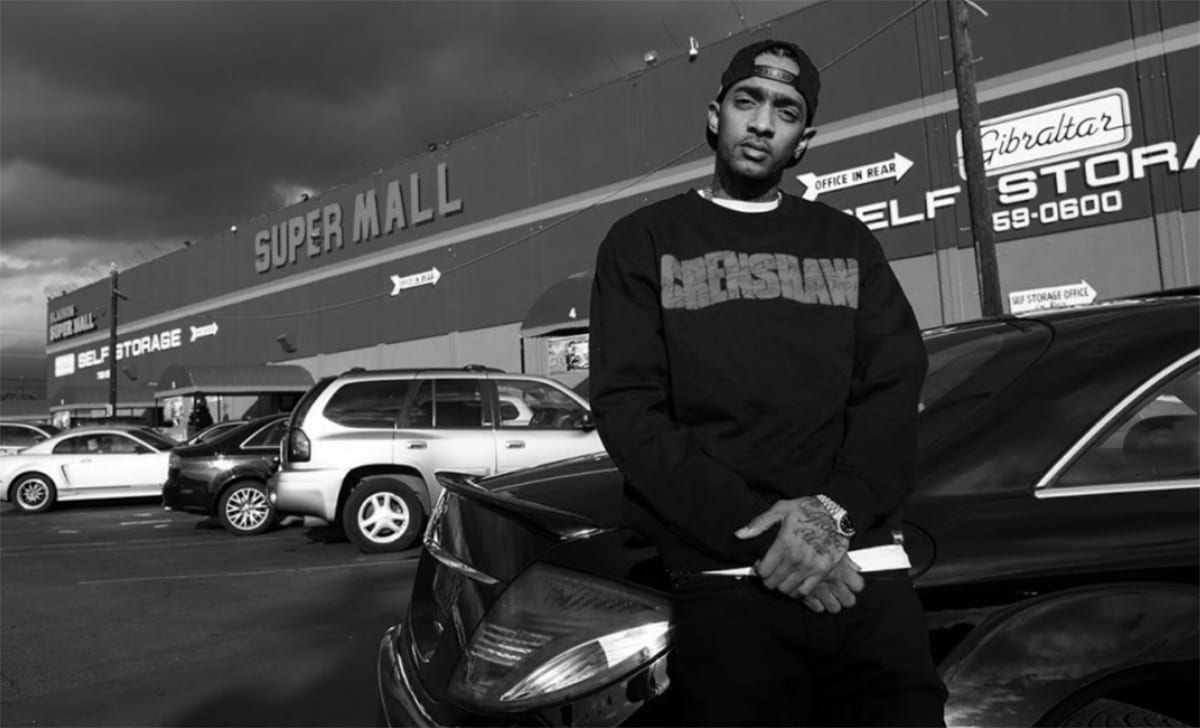 For some, Nipsey first appeared on their radar as the young, reincarnation of Snoop Dogg in the music video of his first single ‘Hussle in the House’, in which he unapologetically represented his neighbourhood of Crenshaw, South Central LA, with many scenes shot in the same location that he would later own multiple businesses, but also tragically meet his demise.

The Crenshaw native had an unmistakable LA twang and delivery over the pitched up G-funk synth sounds popularised by producers like Dr Dre. In 2009, this nod to the signature style of West Coast rap music from two decades prior was nostalgic, but in a period dominated by Atlanta-based artists and southern trap music, it was a statement.

Nipsey and his contemporaries, Jay Rock, Kendrick Lamar and Dom Kennedy, alongside ‘alternative hip hop’ artists like Odd Future, were operating in a gulf in the city; a time when at least commercially, the only successful LA artist was The Game. Nonetheless, within this bubbling underbelly was an energy that would spawn the new voices of LA music, and Nipsey was at the forefront.

Up until Nipsey’s debut album, Victory Lap, in 2018, Nipsey’s output of projects consisted of a string of classic mixtapes; including the early Bullets Aint Got No Names volumes, which saw a young, more aggressive Nipsey expel tales about the darker realities of being an active gang member in a city where gang culture has been woven into its fabric as far back as the 1960s.

The familiar themes of violence, criminality and a desire to accumulate wealth naturally bled into his lyrics. It gave a keen look into the fuck the world attitude of a 23-year-old reflecting an environment in which hyper-masculinity was needed for survival, but by Volume 3, Nipsey’s music began to show signs of a shift in consciousness, one which saw him take a more introspective approach to his experiences growing up in the impoverished inner city.

Songs like ‘Husssle Way’ and ‘Shed a Tear’’ showed a vulnerability and pain that painted a fuller picture of Nipsey’s humanity, whilst ‘The Payback’ demonstrated the sociopolitical acuity that has garnered him much respect and admiration from his fans today. Over three verses, he makes a fierce condemnation of the Bush administration, the self-destruction of gang banging culture and the corrupt police system in his hometown.

Moving forward, a story of hope became a more prominent theme, and the motivational hustler spirit that he instilled in listeners was liberally injected into his music.

Endemic in young men who view living past 25 as an achievement, is often a glorification of fast living and the instant gratification that it brings. Perhaps in-coincidentally, a 25-year-old Nipsey Hussle celebrates achieving this milestone with the introduction of the Marathon series in 2011.

More than just a title, these three projects marked an evolution in mindset, one in which long term planning was encouraged and the path to success was no longer to be viewed as a sprint, but rather a game of endurance. This time period also saw Nipsey’s departure from Epic Records and the creation of an independent record label with his brother and childhood friends, All Money In, which became the platform for all of his subsequent projects.

The kinds of gems that one might expect from a Tony Robbins seminar or a Gary Vee video are littered all over these mixtapes. On ‘The Marathon’ Nipsey lectures that “constant repetition is the path to progression” and advises in ‘Top Down’ that “opportunities don’t knock with opportunists in your group”.

Reading any of the vast number of self-help books available on Amazon, one could probably receive these same messages but what mattered more than the message was the vehicle that these messages were delivered in; quality music, and the messenger that drove them; a man from humble beginnings, who turned negative circumstances into positive and had absolute faith in his purpose. 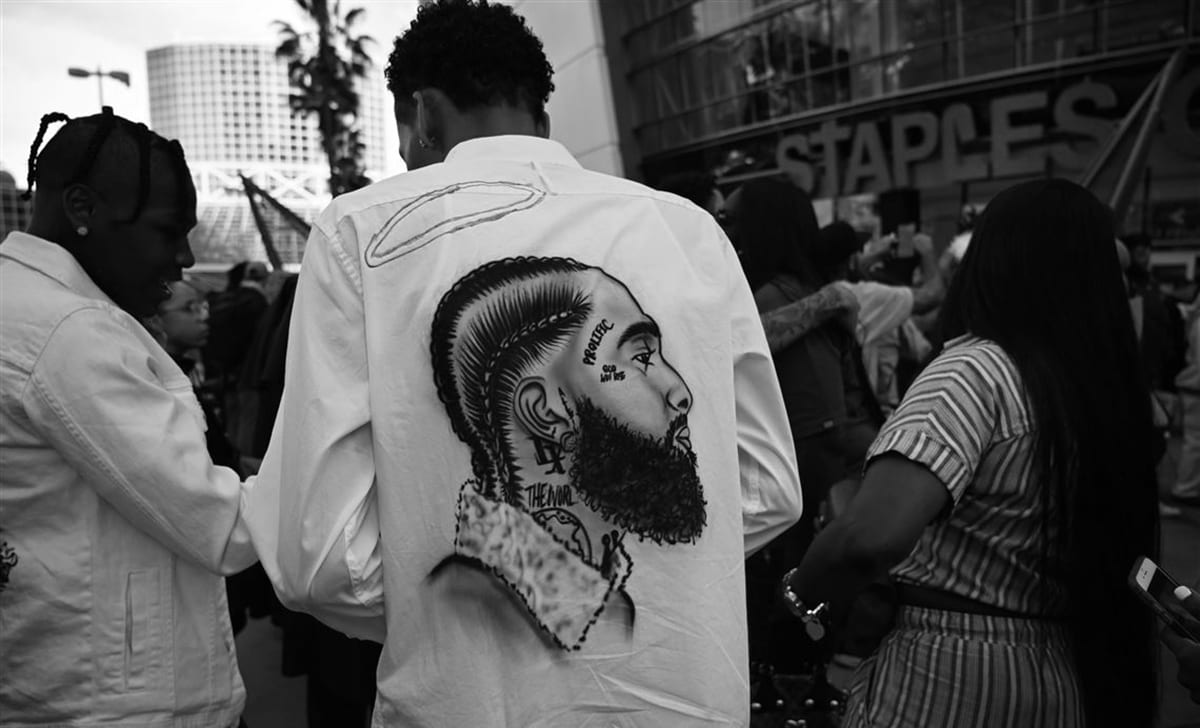 On ‘U Don’t Got A Clue’, Nipsey provides us with his roadmap of success, declaring:“…had a vision, then I made a decision, then I put in commitment then he [God] put me in position”. The second-part of the trilogy, The Marathon Continues, carries on in this tradition with Nipsey proclaiming the benefits of cultivating ideas and having unshakeable belief in their fruition, rapping on ‘Rose Clique “…still somehow I understood that I could make a seed grow, and that one day that tree will bear fruit to feed my people”.

There was arguably no better testimony to his self-belief than the 2013 release of his mixtape Crenshaw, in which he successfully executed an unprecedented marketing and sales strategy, at a time when artists were releasing mixtapes as free downloads, and monetisable streaming platforms like Spotify were still in their infancy.

Five days before the release date of the mixtape, Nipsey revealed that 1000 exclusive physical copies would be available for $100 each and within 24 hours they were sold out, grossing $100,000, as an independent artist, in one day. In many ways the boldness of this move raised his profile beyond hip hop fans like myself who gravitated towards his music relatively early, but to an even wider listenership, as well as entrepreneurs.

However, the group that were looking closest to these powerful moves was us, the young, aspirational 90s babies worldwide, who were approaching the early stages of adulthood and evaluating how we would make our way in the world. Nipsey Hussle, to many of us, transcended his music in a way that few artists in the fast lifecycle era of hip hop ever could.

To be clear, Nipsey did not shy away from the braggadocio lyrics that have become synonymous with rap music today, in fact he provides them generously; describing his material possessions in depth.

Yet, when delivered by Nipsey, they didn’t leave the same impression of tackiness that it did for so many of his peers. It connected in a way which made it strikingly obvious that the materialism some of his songs espoused were just the shiny packaging to attract us to the real messages he had entrusted himself to share with our generation.

In many ways, the Nipsey Hussle that you see and hear in interviews and short films on YouTube, dating back as far as a decade ago, was the stripped down, no thrills version which he was in essence -- a man on a mission. Primarily perhaps, to uplift his community and balance out the negativity that he may have projected into it in his younger years, but more broadly, to shift the consciousness of disenfranchised young people to eliminate the limiting behaviours that we often have and to work tirelessly to manifest our dreams whilst selflessly giving back in the process.

Victory Lap was a fitting title for a man who by 2019 had a long list of accolades to boast of outside of music. He co-owned a number of small businesses and was a forward-thinking investor in a diverse array of industries -- for all of which he steadfastly maintained his community focus. Nipsey’s flagship Marathon Store was situated in the epicentre of the neighbourhood that raised him, mainly employing ex-felons who typically struggle to find legitimate employment subsequent to prison. Alongside his merchandise, he also made a point of selling affordable clothing and basic necessities to truly serve the local residents.

Forever forward thinking, he invested in a co-working space and STEM incubator, Vector 90; again, to be built in his home district of Crenshaw and with the objective of creating opportunities for inner-city kids to access job opportunities in tech and seed funding for their ideas.

Nipsey was creating the change that he wanted to see in the world and documenting the process, not to inflate his ego, but to inspire. Despite growing up in an environment where gang territories can be separated by a street, Nipsey’s sights spanned far beyond his locality.

Among the countless social media posts since his death, you see a young, scruffy haired, Nipsey, in baggy jeans, lecturing his friends about how Africa was stripped of its resources to build the economies of colonial nations. Speaking fondly about his Eritrean heritage and his efforts to reconstruct the disconnection he had by travelling to his father’s homeland as a teenager, for me as a second generation Ghanaian in the UK, made him an even more relatable figure. 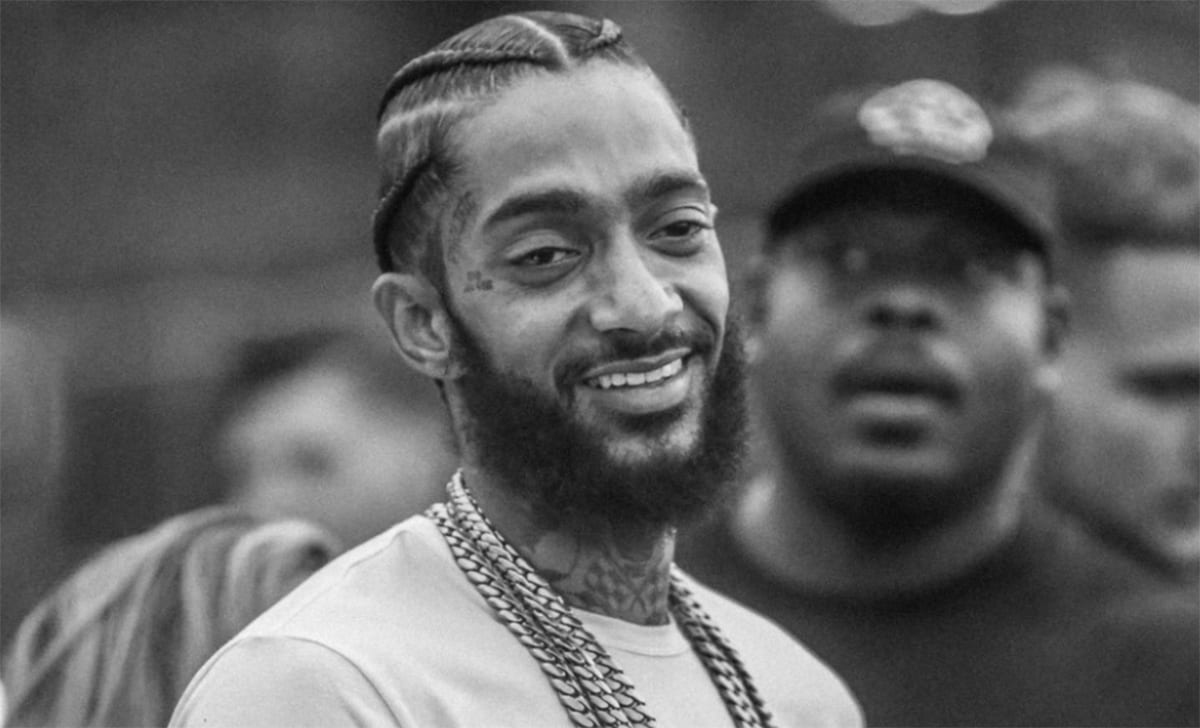 With a Grammy nomination to complete his marathon -- Nipsey makes an ode to classic mixtape cuts like ‘Blue Laces’, ‘Status Symbol’ and ‘Keys 2 The City’, providing us with an update from the perspective of an evolved man. An artist, an entrepreneur, an activist and a family man; Nipsey embodied all the facets of greatness that would have been an accomplishment for two lifetimes.

The outcry from his peers, the generation above, and us, the generation following in his steps, is testament to the monumental impact that he had on all of our lives, and even those who only had the chance to see the extent of this greatness after his death.

In passing, Nipsey has also passed on the baton, and in this spirit we must continue to run our own races with the same intensity and purpose which will become Nipsey’s immortalised legacy for generations to come. As always, the Marathon continues.