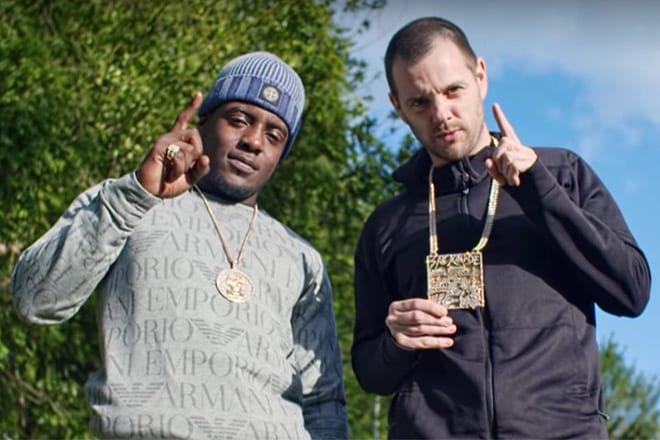 Posted at 23:28h in All Articles, News by Rhianna Patel

Arriving at the Everyman Cinema in Birmingham, the premiere featured a mini red carpet with photographers everywhere you turned. It had the feel of a movie premiere to it and the screening itself was being filmed, only adding to the sense of importance at what was about to be presented.

Inside, a Noisey DJ took care of the music, creating a club-like atmosphere and then Jaykae arrived, one of Birmingham’s very own and star of the documentary everybody had come to watch. When I spoke briefly with him, he didn’t have much to say, instead switching the focus towards the documentary we had all come to see, and it definitely didn’t disappoint.

The documentary discussed the deep-rooted connection between music and what the artists felt like it was being a ‘Brummie’, but what made it feel more real was that they talked to people around town and what it meant to the average citizen to be from Birmingham.

‘The Unstoppable rise of Birmingham rap’ features detailed interviews with the likes of Lady Leshurr, Jaykae, Dapz on the Map, Mist, Lotto Boyz and Saf One, and carries a few key messages throughout.

Firstly Birmingham is a hub for multiculturalism, no matter what race or religion you are, you belong in Brum. Secondly, the artists have taken their hometown and turned into a place where they are proud to be from, they have been persistent in their efforts to show that artists in Birmingham need to be heard and they show unwavering confidence in their attempts to do so.

With a loud applause at the end, we turned to the Q&A a chance to pick the brains of the likes of Alex Hoffman the Head of Music at Vice, Tayo Yusuff who directed the documentary, Mike Skinner the documentarian himself, Jaykae and Dapz. Being able to delve into the brains of the people behind this was insightful. The Streets member told us more about how important he felt it was to tap into the stories that Birmingham was creating as it was becoming the best music scene in the UK.

Dapz went on to say that many Birmingham artists want to reach the level that Londoners have, and that this comes from their struggles as an artist and their drive. Mike Skinner added to that by saying that not only is talent is important, but so is the confidence to always want to push yourself further.

Another question posed to Jaykae and Dapz was about the creation of recording labels in Birmingham to build the infrastructure the grime industry has in London, to which Jaykae said he tells them to come to him now, the audience cheered. He also went on to say that a lot of artists in Brum are doing this independently and are making a lot of money this way instead of going through big record labels.

Dapz agreed in saying, Birmingham is doing just fine, and will keep growing as it’s already so different from 2009. On top of all these debates came light hearted jokes and a hint that Jaykae and Dapz are on route to making a Froggy Part 2. After Jaykae’s ‘Toothache’ was on Power, there was hope from the audience that another one of his tunes would feature, but he had hoped for something that resonates more with ‘Moscow’, wanting a feature on Peaky Blinders.

‘The Unstoppable rise of Birmingham rap’ is an insightful look into a city that seems to get undervalued by other cities, the media and the music industry, but right now makes a very strong case for being the best music scene in the country.

The discussions with the artists, saw a whole new side to understanding what music and being a proud Brummie means to them. It created a debate about a city that was once forgotten. When I asked Dapz about how he felt about being part of such an incredible opportunity he said ‘Amazing. This doesn’t happen often. It’s definitely a moment.’ He was truly left speechless and like much of the audience in awe of this new piece of history.