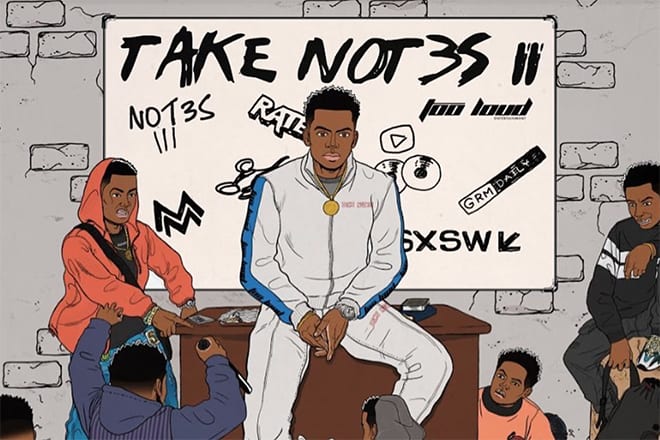 Posted at 01:56h in Uncategorized by Ajay Rose

Not one for taking breaks, Not3s has dropped his second project entitled Takes Not3s.

The 10-track project sees limited guest verses and sees Not3s shift between a variety of genres, also reflecting his tireless work rate. Since dropping his debut project in November 2017, Takes Not3s, the East London artist remained consistent with his releases.

‘My Lover (Remix)’ dropped a few days before 2017 ended, which saw frequent collaborator Mabel feature, which was followed up with a feature on ‘Fine Line’ a month later.

Both tracks received received a positive commercial reception, with ‘Fine Line’ selling over 400,000 copies in the UK, adding to a live performance of the hit at Capital Summer Time Ball to a sold out Wembley crowd.

Not3s then lent a hook to NSG for ‘Pushing Up, before dropping the first single from Take Not3s II, ‘Sit Back Down’ alongside Maleek Berry early in March and released the SXSW-inspired ‘M3 Not You’ a few weeks later. Those three singles have over 12 million views between them, a sign of Not3s ever-growing fan-base.

More recently, he teamed up with AJ Tracey for ‘Butterflies’, which charted in at #19 in the Official Singles Chart, starring alongside Avelino in ‘Boasy’. Since his first project, Not3s has released three tracks himself (My Lover Remix, Sit Back Down, M3 Not You) and featured in four more (Fine Line, Pushing Up, Butterflies and Boasy). Work rate.

Not3s has been active these past few months and has capped off that busy period with the release of his sophomore project, Take Not3s II. To mark the project’s release, he featured on the Big Narstie show, performing his latest single, ‘Just Fine’.

The project itself boasts just two features, AJ Tracey and Maleek Berry, with the remaining tracks seeing Not3s surf between the many genres his sound encapsulates. Listen to Take Not3s II below.