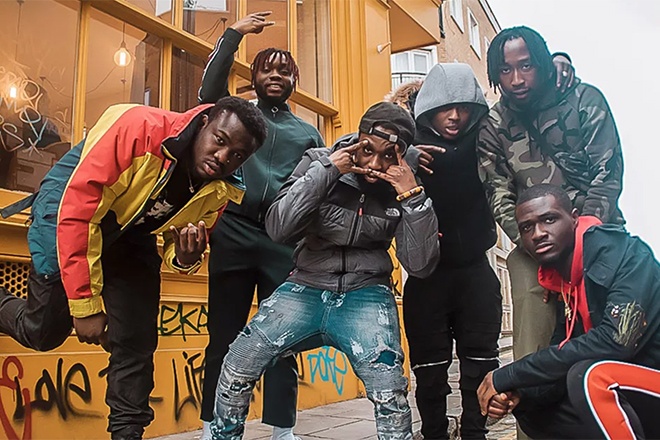 ‘Afro-bashment’ or ‘afroswing’, that is, a fusion of a predominantly rap sound with bashment and afrobeats influences, is a sound on the rise within UK music. NSG’s music has arisen from that crowded pack, but they haven’t confined to the genre, but rather, pushed its boundaries with their eclectic offering.

Five of the six, Abz, Dope, Kruddz, Mxjib, Mojo and OGD, went to the same school, with the final member, Mojo, joining later, with things officially kicking off in December 2013. Since then, the group have pooled together their many musical influences to the point where their sound can’t be confined to one summarising term.

At the start of their Tim Westwood freestyle, Kruddz makes a point of reaffirming that their sound shouldn’t be hit with a label like afro-bashment, so how do NSG define a sound which isn’t easily definable? 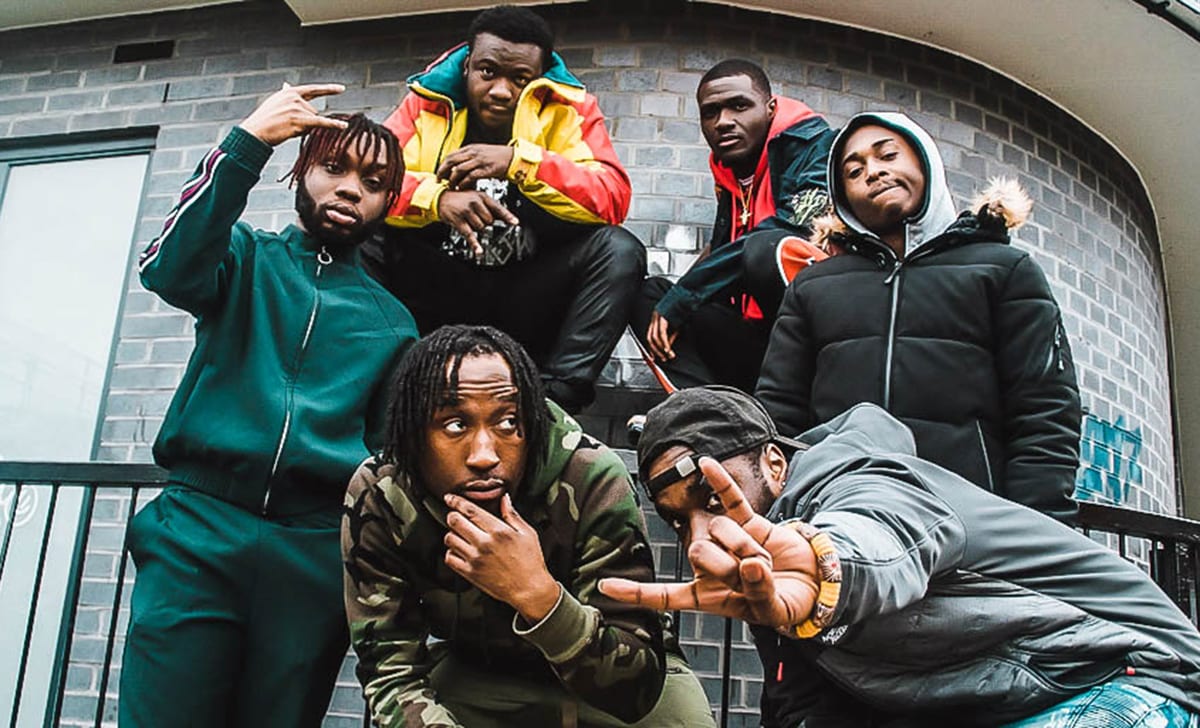 “It’s a blend of worldly music. Hip-hop, bashment, afrobeats, soca, high-life, anything. That’s why we don’t like putting ourselves in the box, like say with the afro-bashment or afroswing. We think it’s beyond that. It’s world music,” explains Kruddz, with Abz adding: “I feel like the heaviest type of influence on our music is bashment, reggae type of music and dancehall.”

To create a new style of music, innovative production is a necessary requirement, one that can’t be side-stepped. You need a producer who can already see a space for your music and can then bring that sound to life in a way that’s exclusive to you, rather than a beat-maker who can make what’s current.

The what’s current formula is a low-risk, generic path which works for some. Creating your own lane holds higher dividends and the risk of failure is therefore higher. But those fears are significantly lessened when working alongside a visionary beat-maker like JAE5, producer of much of NSG’s catalogue to date, including four of the nine tracks from their debut LP as well as their biggest smash, ‘Yo Darlin’. 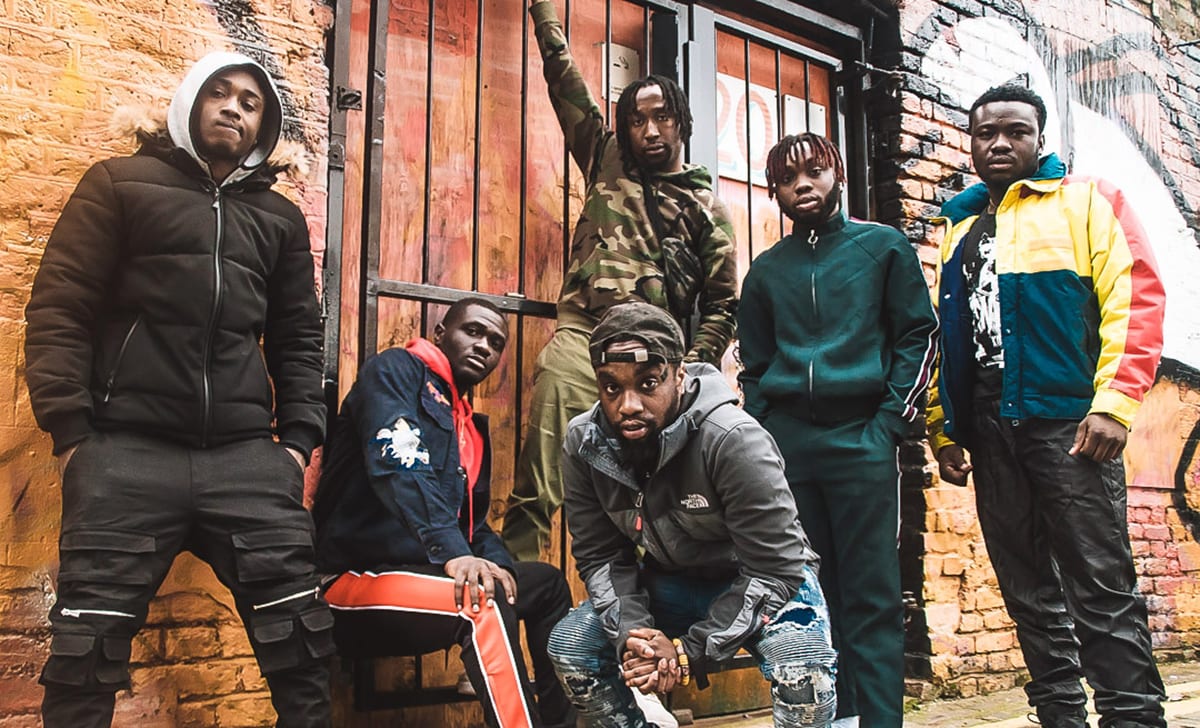 JAE5 was the mastermind executive producer behind J Hus powerful debut album, Common Sense, helping Hus to introduce his sound on the biggest stage. Like Hus, NSG are also benefitting from the expertise JAE5 can offer, as well as his stellar production skills, to carve out a niche for their diverse brand of music.

“The guy is a wizard. When you’re sitting there watching him working, you’re just in awe. A lot of our success, a lot our music, a lot of our sound, is definitely down to him. Big up him 100 times,” says Mojo, as OGD adds: “Even back when we was coming up, he doesn’t just produce, he used to engineer our stuff, mix it down. When we do a shit verse, he tells you, ‘this verse is shit, delete that’. Quality control.” 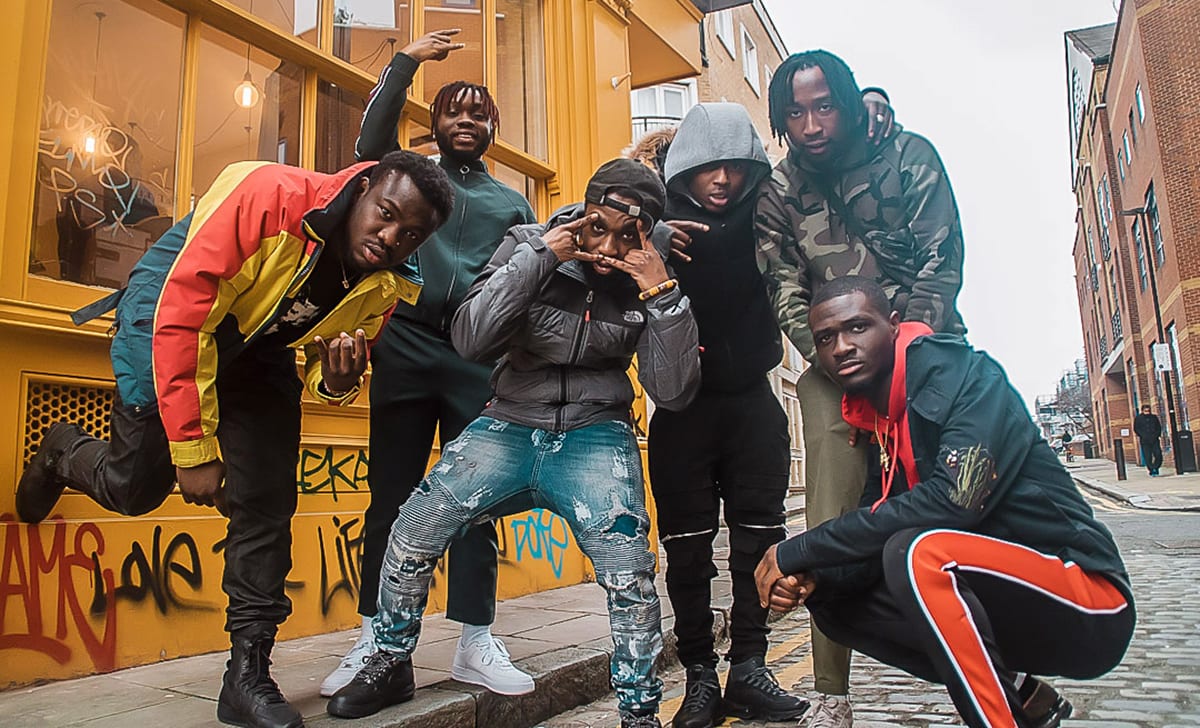 The first track of their Grown Up LP, ‘Mercy’, showcases their diverse offering to a tee, with gospel moments, straight up raps bars and a tidy collection of different melodies, powered by a stripped back afrobeats instrumental with a few electronic twists. The rest of Grown Up follows a similarly wide-ranging path, the group’s first project, preceding a feature on J Hus debut mixtape, The 15th Day, back in 2015. How was that concoction of sounds digested among fans?

“Basically, before Grown Up, we released various singles, so I think because we released so many different things, we needed to put something together, to show people we can actually present something. We named it grown up because our music has grown from where it was in 2013 and dropped the project in 2016. Just wanted to show people the growth in our music. Big up all the producers on that, Shoots and our home-grown producer, OGD,” recalls Abz.

‘Yo Darlin’ fed off the ambitions of Grown Up to catapult the group to new heights. The music video has been viewed a fraction under 13 million times since its release in June 2018, with around 10 million of those coming in 2017, enough to make it GRM Daily’s third-most viewed video of the year. You could call it something of a breakthrough moment, but when such instances occur, are the artist’s themselves always aware that they’ve just created what would become their biggest hit? 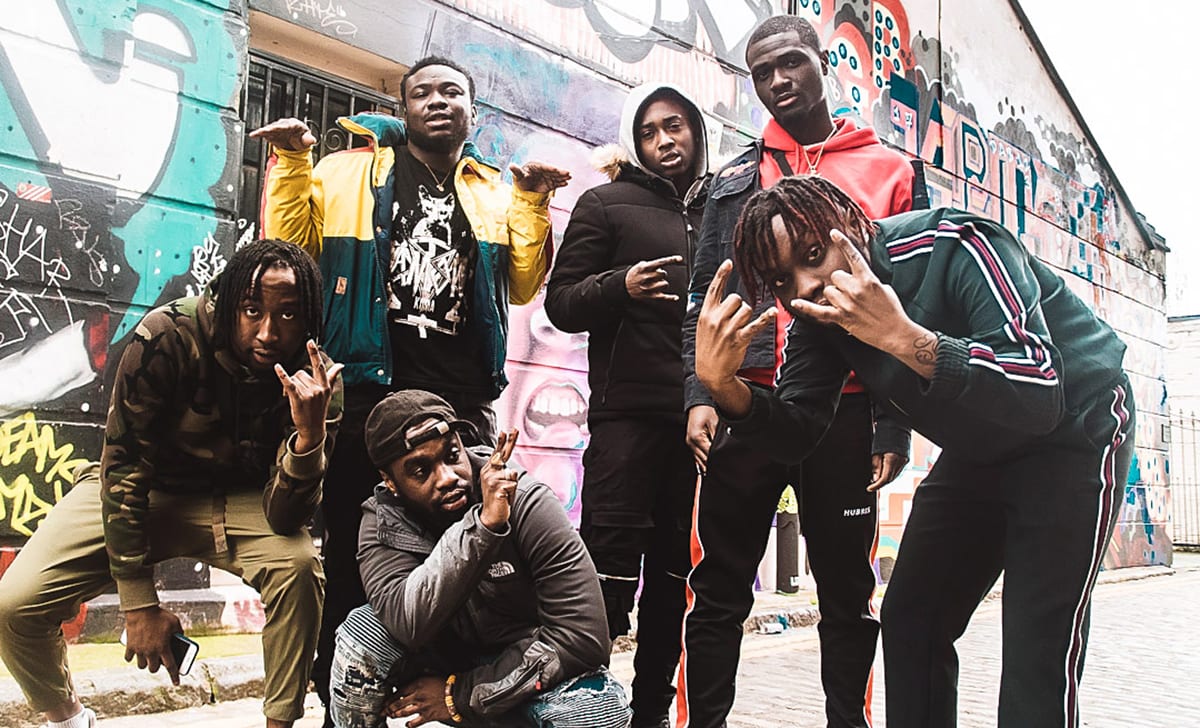 “When I first heard it, I knew, this was it. I wasn’t there for the recording process, I wasn’t about,” says Mojo, before Abz asks: “where did you go again?”, to which Mojo jokingly replied: “don’t worry, I went on holiday. When I first heard the song, I knew this was a banger. A super-banger, and it was, it turned out to be that.”

Abz continues with: “I’m not gonna lie, after everyone recorded their verses, OGD sent it to everyone’s email, I heard it on the final mix and was like ‘yo, this song is the one’. Since then, man’s had bare tracks and said ‘this is the one’, but we aint released them yet. With the views, it wasn’t more about the views, it was more about, where the song’s going, and who’s listening to it.

“Obviously it’s good that we got that many views, but it’s all about who’s listening to it and who’s heard it. For example, the likes of Liam Payne, Desiigner, it reached those kind of people. When I used to think about those kind of people, you think they’re so far away, but these days they’re closer because of ‘Yo Darlin’.” 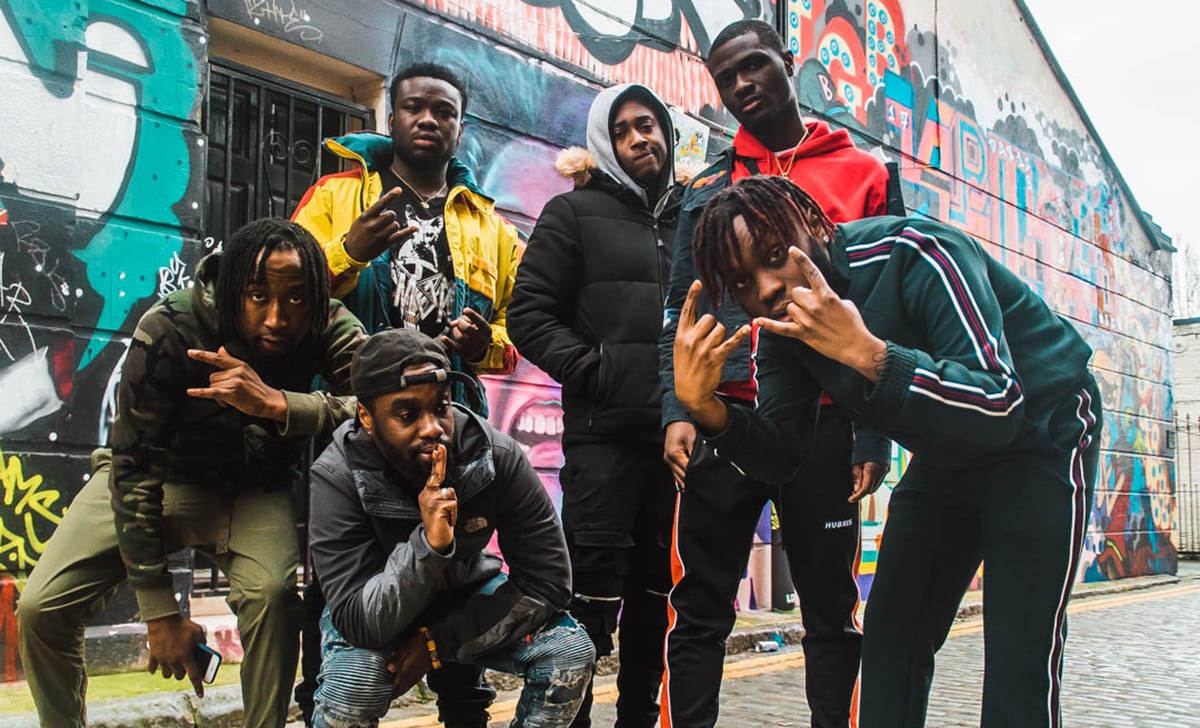 OGD adds: “The whole period of ‘Yo Darlin’, the standout one was Liam Payne, he actually put all over his socials, vibing to it, it was sick. Big up Maya Jama, AJ Tracey, they were vibing to the song. There’s a few people. But the one that stood out for me was Liam Payne.”

The former One Direction member drafted in NSG for a remix of ‘Bedroom Floor’, such was the impact of ‘Yo Darlin’, while the song continues to hold a buzz almost ten months after its release, accumulating at least two million views in 2018 alone.

The success of one big song creates pressure to create another, and that’s what seems to have happened with ‘Pushing Up, NSG’s latest single which features a hook from Not3s and a healthy reception online. 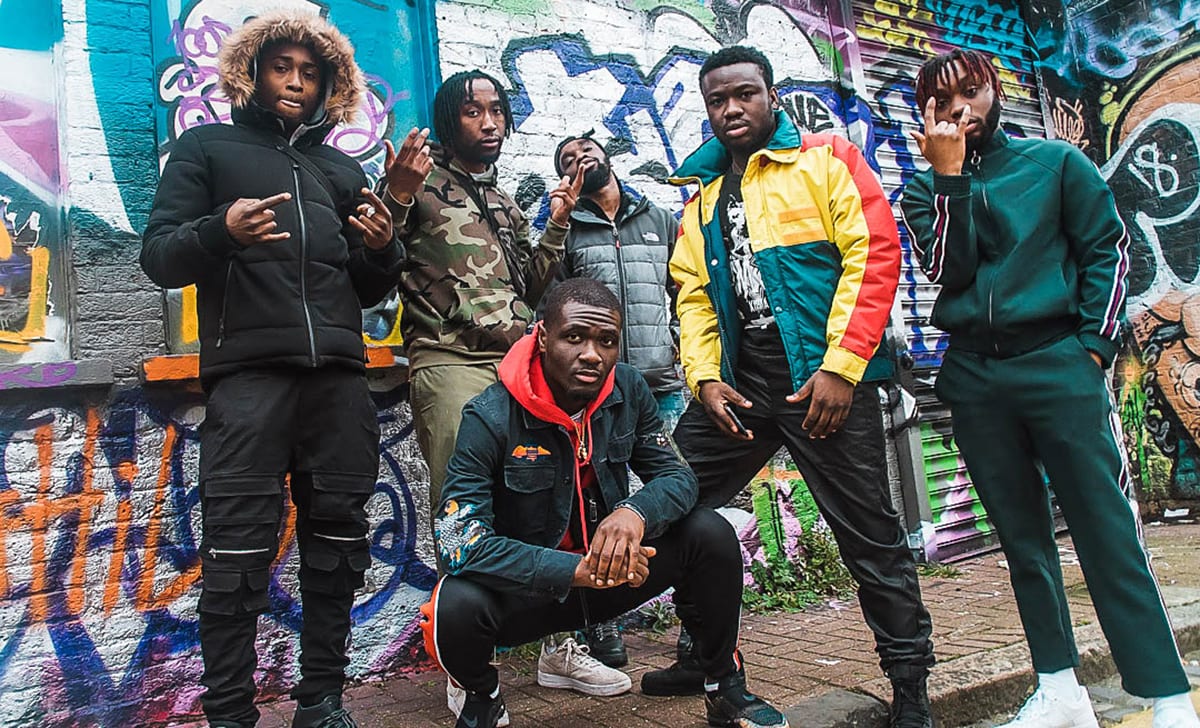 “That was God’s plan. We had a session with Ayo, the guy that made the beat, big up Ayo the producer, he’s hard. We went into the session, everyone recorded their verses, but then we needed a chorus. Bare in mind, when we recorded that song, it was like a week or two before we went on Not3s’ tour, big up Not3s. Then, Not3s came into the session after we took a break, and he was vibing to the track. Then he was like ‘can I jump on that’,” reveals Abz, with Mojo adding:

“We were like of course, c’mon. Our Hackney brother, we didn’t say no. Do your ting. Then he went in the booth and done his magic, and that’s how the song came about.” 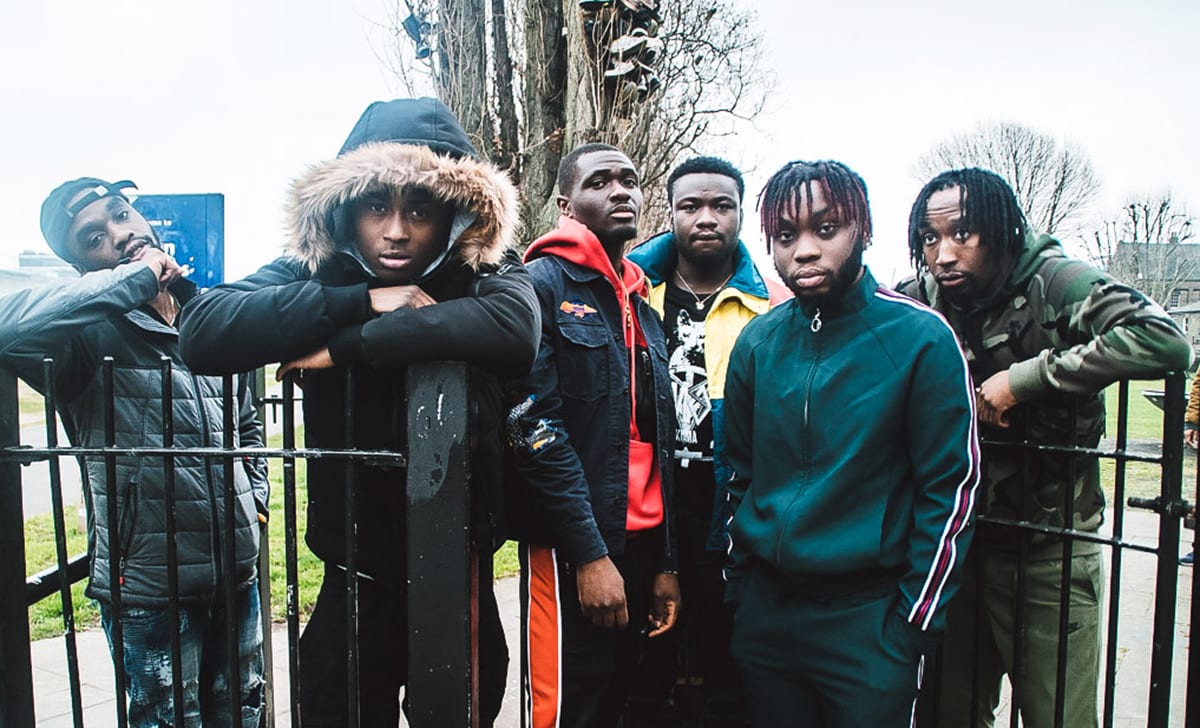 NSG share the same producer and studio space with J Hus and they all chopped it up on the former’s first tape, so that vibe Kruddz alludes to has been nurtured over time, having met after being introduced to one another by DJ Young Boss Entertainment a few years back. So NSG supporting J Hus on his nationwide ‘Common Sense’ tour seemed a logical one, one which built off similar touring experiences with Geko.

“Geko was our first one. Our first official tour. He was the first one to bring us out. That was another sick step. We appreciate every single step, J Hus was the last one. It was crazy. The last show in London, Brixton, 5000 people, in our eyes, that’s like dreams. It was a shutdown. They actually knew our song as well. Big up J Hus for bringing us on that tour.”

NSG have released a solid debut project, put up big numbers, supported big tours and have done so with their own sound. It’s simply too varied to chuck one specific label on it, so the decision to start that Westwood freestyle by getting straight to the clarification of not labelling them as one genre was a necessary one.

They are knocking on doors, a lot of them, so how many hinge-loosening moments are in-store for NSG in 2018? 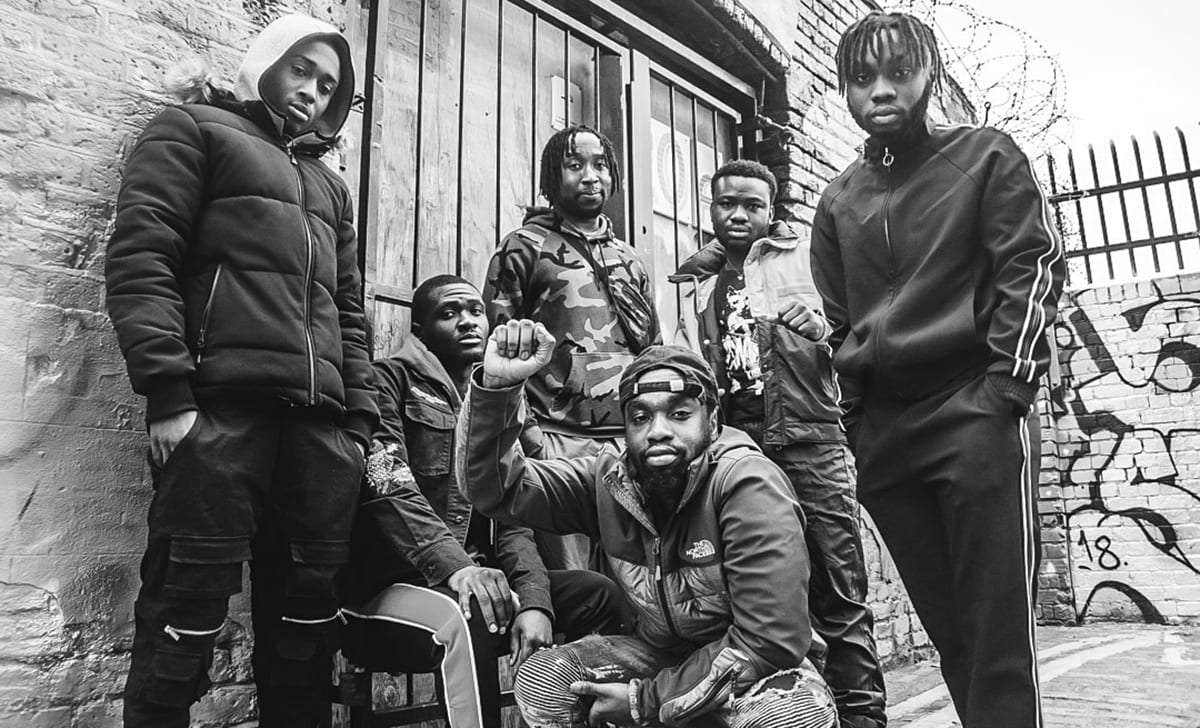 “Music, music and more music. More bangers. We got couple shows in the pipeline in a city near you. You’re gonna see us about. Luckily, it’s not even luckily, but we decided to stay independent, and we’re doing pretty decent. So we’re just gonna do what we want, we have the freedom.”

NSG explain that various record labels showed an interest in signing them after the success of ‘Yo Darlin’, but as things stand, the group remain independent, so what fuels that decision to turn down label interest?

“We’re tryna take our value so high, so that if we sign, we are the top dogs, you’re gonna take us fully serious, and we don’t feel it’s that time at this moment, so it’s about timing” says Kruddz.

“Another thing is there is six of us. We have sick managers as well. Being a solo act, there’s way more responsibility, you need a bit more help, but with us, there’s six man, and a lot of managers, we can divide up the tasks and share the responsibility. So at the moment, it’s not that deep to be having a label,” explains Mojo, with Abz adding:

“That first meeting, joke man. He was just joking. One of them let me meet you guys, gas you up. Big up him, he tried to get a good deal, but if he got that deal, that’s good business. But we’re smarter than we look.”