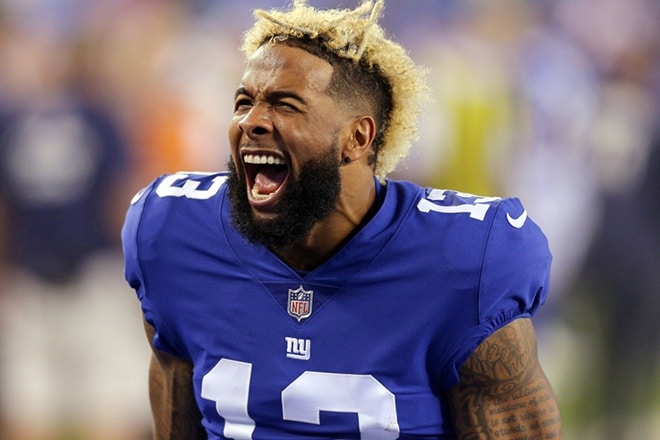 Posted at 21:14h in All Articles, News by Ajay Rose

Since entering the league in 2014, Odell Beckham Jr has arguably been the league’s best wide receiver. Now, he is about to be paid like it.

Odell will take home around £15.51m ($20m) over the first three years, surpassing both Antonio Brown’s £13.18m ($17m) annual salary with the Pittsburgh Steelers and the £42.66m ($55m) overall in guaranteed money Mike Evans got from the Tampa Bay Buccaneers received earlier this year.

Across the five years, Beckham’s average salary will be £13.96m ($18m) per year, making him the second highest-paid non-quarterback, after Denver Broncos linebacker Von Miller, who earns £14.80m ($19.08m) per year.

Beckham Jr was entering the final year of his rookie deal and was scheduled to make £6.51m ($8.4m), considerably more than the £1.43m ($1.839m) he was set to make last year, but nowhere near a level that reflects his ability. After months of back-and-forth negotiation and a period where it was suggested that the Giants would trade the 2014 first-round draft pick, the two parties have agreed to a record-breaking deal.

The wide receiver has put up historic numbers during his first four seasons. Beckham has averaged more receiving yards per game (94.1 YPG) than any other player in the league’s history, according to NFL, while the New Orleans native is the only player in NFL history to begin his career with three straight seasons of 90-plus receptions and 1,300 or more receiving yards.

With a revamped offence which will see Eli Manning continue as the starting quarterback, with Odell Beckham Jr at wide receiver and the second pick of the 2018 draft, Saquon Barkley, offering huge potential in the running game, the New York Giants look set to bounce back majorly.

Last year, the team’s record across 16 regular-season games was 3-13, the worst in franchise history, a torrid stat which coincided with a season-ending ankle injury to Odell Beckham Jr in week four underlining his importance to the team as one of the league’s very best at what he does.