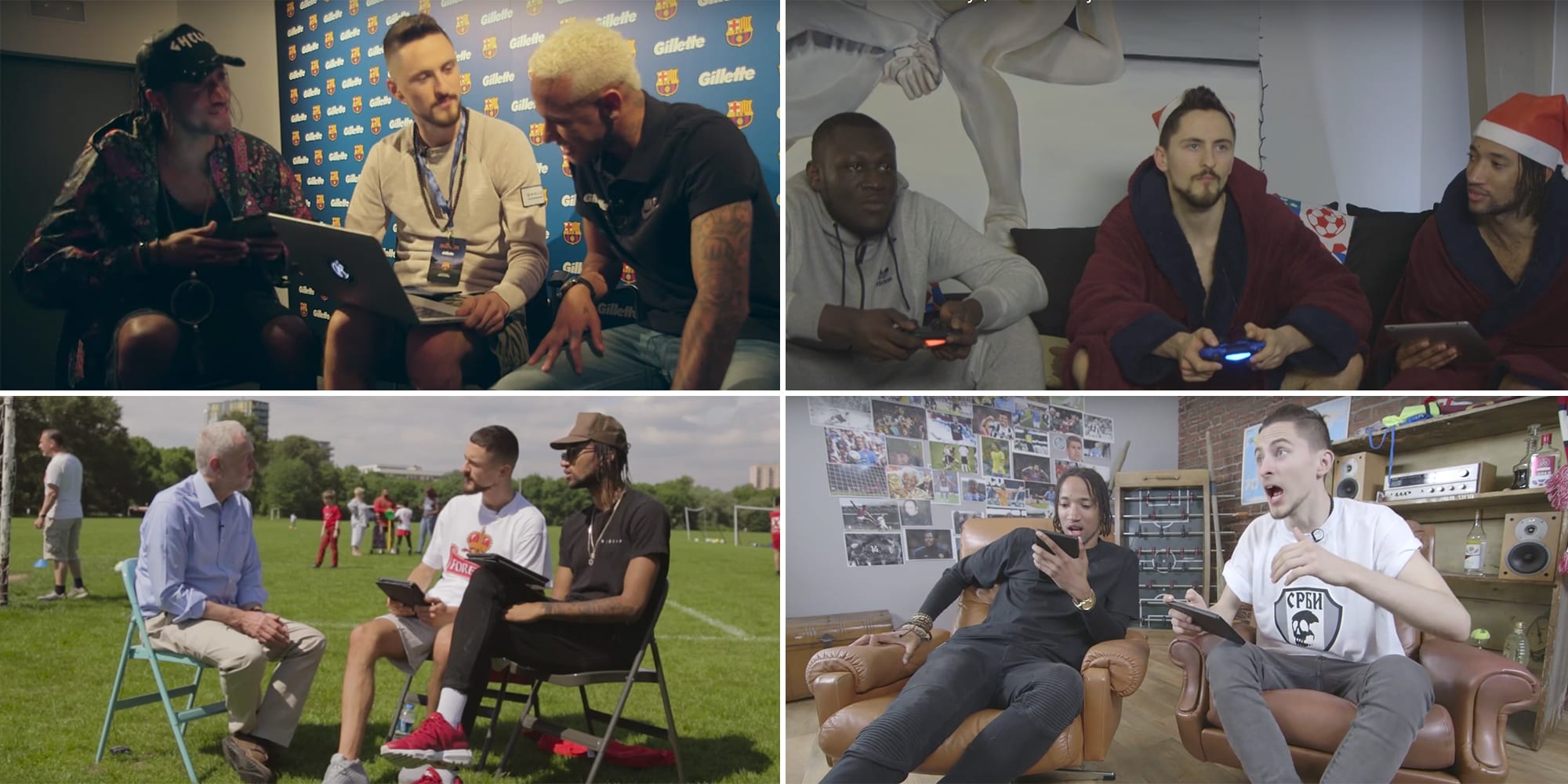 Posted at 15:35h in All Articles, News by Ajay Rose

Football-based content on YouTube has become ingrained into the fan experience for some. Beyond well-composed, inconclusive highlight videos that make any average player look world class and goal highlights, there is a considerable market for hearing people talk about football with a conversational undertone you wouldn’t find on TV.

Footballers are among on the most robotic, media-trained expressionists in all of sports. With American sports, athletes are far more open, honest and connected with fans on a level that goes deeper than their technical abilities. So you could say the coyness of footballers in-front of television cameras creates a demand to get past their media personas in other spaces. Copa90 is one of those spaces and Poet and Vuj have played an important role in growing football based content.

Copa90 is one of the biggest providers of football content on YouTube, and through their two shows, Comments Below and particularly, FIFA and Chill, Poet and Vuj have delivered football punditry in a way that’s trailblazed a path for others to follow, by simply providing fans with the content they want.

Creator of ArsenalFanTV, Robbie Lyles, said the reason he set up his channel in 2012 was because he was tired of ‘pundits who weren’t even at the game’. If ArsenalFanTV are the fan-lead pundits you who go to every game week-in, week-out, then Poet and Vuj are the pundits giving opinions of what fans actually speak about, and providers of interviews that go a few levels deeper than a 30-second post-match generic chat about the ‘great effort from the fans on a tough afternoon’.

Comments Below sees the duo answer fan-lead questions which usually cover the main talking points in football from that week. So if Mo Salah scored four goals in a game, then they’ll discuss that, and if Vuj wears another wavey bucket hat, that too will be on the agenda. You might also hear a random analogy about Vuj’s dancing at Carnival to help explain Lionel Messi’s brilliance. It’s about that balance between providing some kind of informed football opinion and a dose of entertainment. Comments Below hits that nail on the head and is in its fourth year as a show, which is a long-time for any show, let alone one on YouTube.

So does FIFA and Chill, taking things a step further with regular guests from the world of entertainment. Here, the word guests now means anyone, as the show has become a who’s-who for the top faces in sport and music. Cristiano Ronaldo, Neymar, David Beckham, Frank Lampard, Anthony Joshua, Stormzy, Maya Jama, Mist, Lil Yachty. Jeremy Corbyn even. The reason for this conveyor belt of elite talent is because of Poet and Vuj.

The free reign to call in guests to bring a crossover in guests is reflective of the show’s wider ambition, to give the fans what they want. If an artist if popping at the minute, chances are fans are going to want to see them playing FIFA. It’s just how it works in 2018. There aren’t really too many TV shows that embrace a format that deviates so far from providing sports entertainment into a realm of more general entertainment.

Sometimes Soccer AM call in a few music artists, but aside from that and maybe a few odd appearances here or there by artists, there is no show that pushes the boundaries between sports and music as much as FIFA and Chill. Besides, these shows don’t work unless the presenters know their stuff, to the point where they can talk football and music seamlessly and do so knowing they know both areas well enough to make for a solid show.

This isn’t one of those interviews full of questions like the ones you’d get five years ago in Facebook chain mail, encouraging you to answer 20 basic questions about yourself which you should then post in the Notes section on your profile before asking others to follow suit. To have a show about football, music and entertainment in general, you need to know those subjects areas well enough to discuss week-in, week-out. Poet and Vuj display that necessary broad range of understanding to negate any fears about the show not being done properly because it’s such a crossover.

You might see Neymar listening to ‘Shutdown’, Mist talking about how he doesn’t mind scoring cut-backs, Anthony Joshua talking about which footballer he’d fight or Jay Ajayi relating his NFL experiences in a way which non-NFL fans in the UK warm to. We first heard news that Giggs had a track with Lil Yachty on the way from an episode of FIFA and Chill. Poet and Vuj are answering those random questions many fans ask one another, but never see answered on a major platform, until now.

Consistency has been key here too. Comments Below began in 2014 and has since seen over 200 episodes. Each one is around 10 minutes. That’s nearly a day and a half worth of two guys talking football for four years straight. FIFA and Chill has had over 50 guests since its inception in 2015 and it the show also took them to Euro 2016 and will see the pair visit Russia this coming summer. In simpler terms, a lot of content is being regularly made and when it drops, it’s influence only continues to grow.

FIFA and Chill with Lil Yachty | Poet and Vuj Present

Copa90 are one of the biggest providers of football content online. In 2015, the company was valued at £50m and partnered up with YouTube, having racked up over 1.5 million subscribers with an average of more than 3.6 million views per month. Whilst being just two components of a bigger assembly line, Comments Below and FIFA and Chill are still key cogs in the company’s operation. Poet and Vuj brought these shows a big audience and are now into their fourth year as a presenting duo and are close friends outside of the show, a dynamic which also adds a sense of authenticity to the show.

Because of their success, it also gives way for more people to get in-front of a camera and give their opinion as if you or I were talking to a friend. The evidence that proves football and music can work in the same segment, on a regular basis, has been provided by Poet and Vuj, while the market for simply talking like a fan, to other fans, has too been helped by the duo’s work. That market for conversational content on YouTube is huge, and in the football world, you can’t deny the impact Poet and Vuj have had.

Ultimately, Copa90 succeeds at what it does because it puts fans first. Poet and Vuj succeed at what they do because they are able to deliver the content fans want down to a tee, and in doing so, have pushed the boundaries between sports and entertainment massively in the past few years.