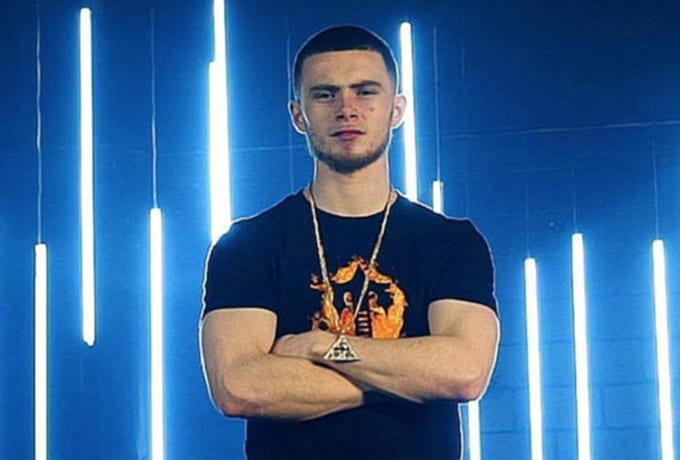 09 Aug Interview: Birmingham rapper RK is definitely not to be slept on

Posted at 13:19h in All Articles, Interviews by Ajay Rose

Known for his unapologetic and authentic ‘struggle rap’ flow, RK is further proof of Birmingham’s growing influence over the UK rap scene.

The likes of Mist, Jaykae and Lady Leshurr have all risen from various parts of the 0121 to the upper echelons of the rap game, and in doing so, helped to establish a blueprint for the next generation of Birmingham-based artists to build from.

Seizing that opportunity is Erdington’s very own, RK. Not one for airing on the side of holding back, RK displays his lyrical arsenal with clever rhyming patterns and couplets behind a relentless flow, all of which comes together to birth a pure rap sound that’s continues to attract new listeners.

‘I’ll send a man in/ bada bing/ like Benny did/ I came from the block, but not the same place that Jenny did/ that’s why I’m always rolling with my hood up/ like Kenny [South Park] did/ tryna get my tunes up on the radio/ like Kenny [Allstar] is’ raps RK in a recent BBC 1xtra freestyle. Here, RK cites one of his musical influences Benny Banks, while he also tells me that he takes homage from K Koke and Potter Payper, two more artists who deliver gritty, lyrical rap in abundance.

To highlight the impact of these platforms, Mist, Jaykae and Bugzy Malone, three of the UK’s biggest artists outside of London, have racked up over 30 million views on these channels between them, before reaching new heights with their respective careers. So if the music is strong enough, there is definitely an audience there ready to digest the content.

Throughout his work on these channels, we are birthed to early instances of RK’s authentic rap flow, laying down for the foundations for him to achieve further success when it came to dropping actual music videos. Speaking on the influence of P110 and JDZ Media, RK tells me: “They were the channels who first established my fan base and got people aware of the content I was creating and sharing.”

Towards the end of 2017, RK dropped ‘Brum Town Baby’ that brought together a lot of the momentum he built up through freestyles with a well-put together single. His relentless flow transitions seamlessly between his verses and the catchy chorus with a subtle use of autotune throughout to up the ante.

‘Because when it’s go time, they be freezing up/ if you gotta tell man you’re real, then you ain’t real enough’ is one of many standout lyrics from ‘Brum Town Baby’, further demonstrating RK’s ability to lyricism with authenticity, which was also on display during his ‘Mad About Bars’ freestyle, released a few weeks later.

“It made a lot of people just take notice to be honest. I feel as though I haven’t fully broke through yet but that was the track which broke down the first barrier for me,” explains RK of the track’s impact. He followed up ‘Brum Town Baby’ with ‘Running’, a release he reflects on honestly when I asked about its reception:

“It’s been weird. I’ve never got such mixed reactions. A lot of people close to me and around me are saying they feel it’s one of my strongest and best ever tunes. But going through comments and seeing what views its on, there are also a lot of people not impressed. Because I’m known for rapping about struggle and the ‘Running’ tune is more about flexing and having a good time. But it’s doing well regardless.

Back in March, Mist held a 12-date nationwide tour. On the penultimate leg, the ‘Sickmade’ rapper took to the 3500-capacity 02 Academy in Birmingham and brought out RK, who has now guest featured around five times in total, but none bigger than this particular show.

A debut project will help certainly help RK to shift the perception from freestyle rapper to artist, as well as making him more of a bookable artist. So I asked him if we can expect a body of work in the near future, which he says is coming “very soon”, continuing with: “It should have already been out but I’ve been back and forth trying to find the right beats, vibes and features so that there is at least one track on the project that everyone will like.”

With a growing catalogue of music attracting healthy numbers, with a fraction under 10 million views on YouTube and plenty of streams, and after dabbling in the world of live performing, RK seems to be geared up to fully breakthrough in UK rap. But what kind of impact does the man from Erdington want to make with his music?

“As I’ve progressed in music and seen some of the impacts I have on people and how much some kids aspire to be me, it makes me want to do it just to show other people that its possible, Get a job that you like doing and you’ll never work a day in your life.”