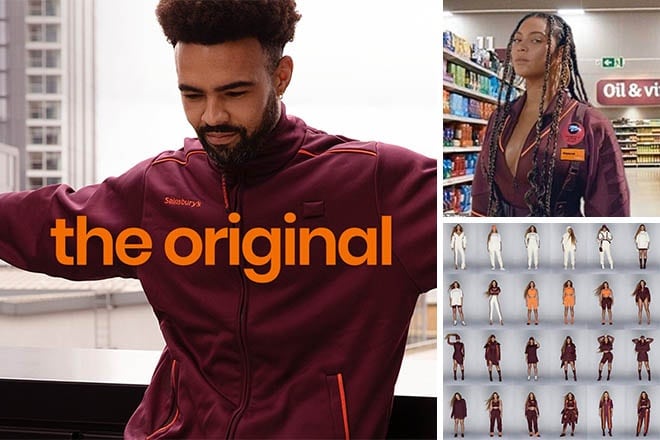 Posted at 18:10h in All Articles, News by Plugsville

One of Twitter’s best uses is serving as a hub for real-time memes and that was no more apparent than Sainsbury’s Beyonce-inspired Twitter moment.

Beyonce recently teamed up with Adidas to release a new Ivy Park range of activewear which included hoodies, cycling shorts, sports bras and more. The new line sold out within its first day but that didn’t stop Twitter, in particular, one of Britain’s biggest supermarkets, from voicing their opinions, due to the similarities between the new range and their maroon and orange uniforms.

In response to online murmurings about the similarities between the Ivy Park clothing line and their famous maroon and orange uniforms, Sainsburys posted an ‘official’ response to let the world they pioneered that design. The tweet featured an employee wearing Sainsburys uniform accompanied by a caption which read ‘reppin since 1869’. The picture also had the words  ‘the original’ plastered across it, with ‘#sainsbey’ in the corner of the image, just in case anyone was in doubt as to what the tweet was about.

Here is a compilation of the best responses to Sainsbury’s Beyonce-fuelled Twitter moment:

clean up in aisle 24 pic.twitter.com/8xmVTGGxVg

A member of Sainsbury’s social media team was quick to shut down a commenter who pointed out that the supermarket chain didn’t invent the maroon and orange combo:

We made it famous though!! Karen

I'm too scared to ask @sainsburys staff for help incase they turn out to be a random person wearing the @Beyonce new clothing collab 😂 pic.twitter.com/jWtyzvDHVF

i hate that whenever i see beyonce's new ivy park line all i can think about is her working a 12- 5 shift at sainsburys pic.twitter.com/bk5WKFsgjf

The CEO of sainsburys would like to thank Beyoncé and her team for the free promo pic.twitter.com/XEheNYn8Ey

Although, the ‘Beyhive’, a term given to Beyonce fans who defend her work passionately online, were also out in full force. Some users were quick to point out that Sainsburys, at least outside of the UK, remains a relative unknown on the global scale compared to Beyonce’s:

nobody even knows what is a sainsbury PLS

No you didn’t. We didn’t even know it existed until now.

After reading up on Sainsbury’s Beyonce-fueled Twitter moment, click here to remind yourself of the best rap and hip hop albums from the last decade.