Posted at 20:13h in Uncategorized by Ajay Rose

The latest Plug Records release, ‘How It Is’, featuring Roddy Ricch, Chip and Yxng Bane, has debuted in the top 20.

Sitting at #18, the latest transatlantic link up has made a big first impression, good for the highest new entry among black British music this week, with NSG spending their third week in the top at #10 with ‘Options’.

Cadet and Deno’s ‘Advice’ drops six places from #18 to #24, as ‘Kitchen Kings’ from D Block Europe is at #26, as their Home Alone mixtape slides from #17 to #25. After dropping a remix to boost the original version, featuring Jaykae, 23, Kwengface and Geko, Swarmz and Tion Wayne shoot into the top 40 with ‘Bally’ at #32.

AJ Tracey’s debut album spends another week inside the top 20 at #17, with two of his singles, ‘Psych Out’ and ‘Labrooke Grove’ in the single’s charts at #47 and #81. Loski and Octavian both saw new material debut this week, with the former artist’s Mad Move mixtape entering at #41 and ‘BET’, featuring Skepta and Michael Phantom, at #51.

Giggs’ fifth album Big Bad goes from #6 to #32 and one of its most popular tracks, ‘Baby’, remains at #53 for another week. Speaking of new albums, Dave’s Psychodrama is expected to have a strong debut next week, but in the meantime, ‘Black’ spends another week in the top 100 at #71 after originally debuting in the top 40. 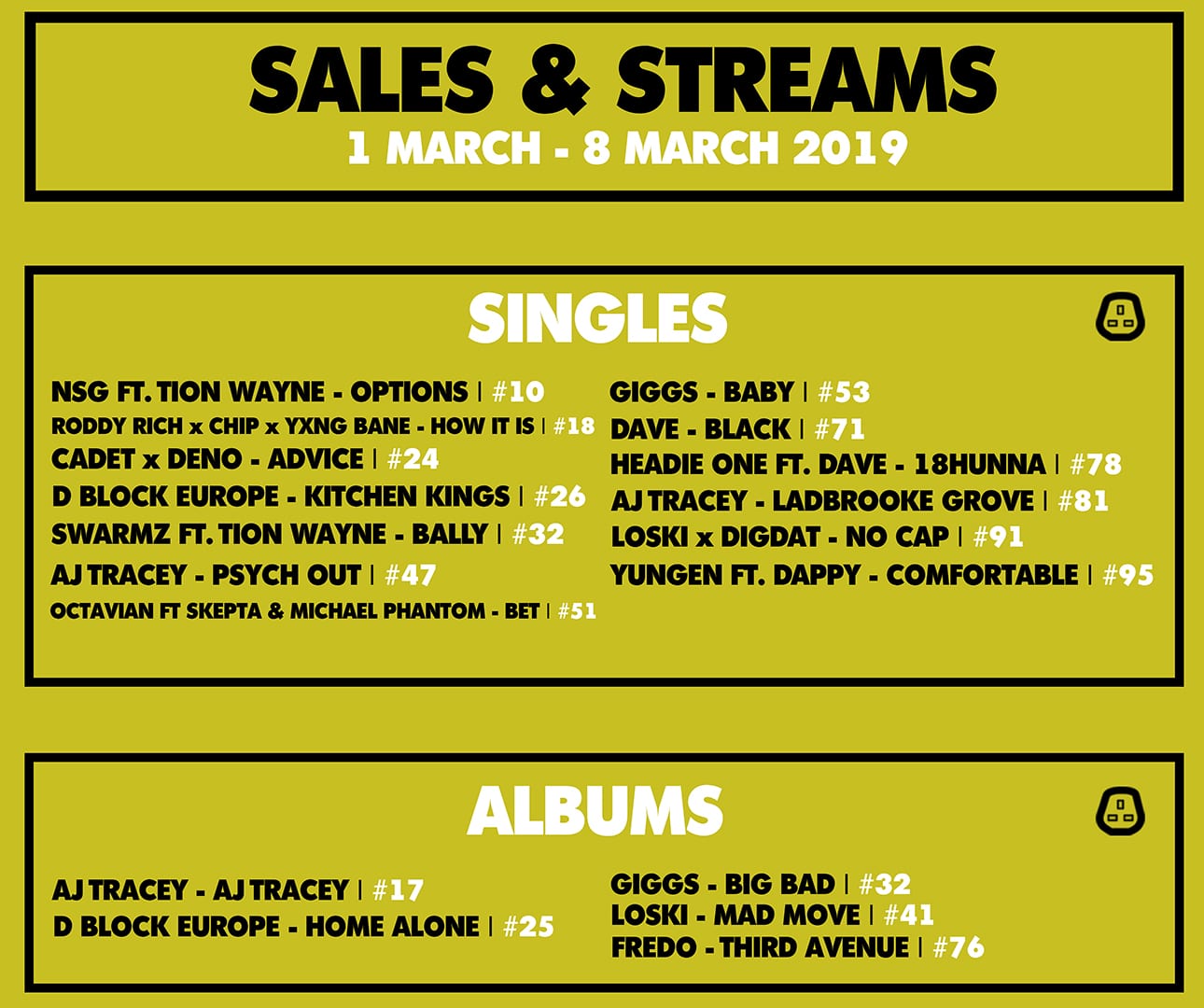 The same is true on Spotify, where the 11 tracks which make up Psychodrama accumulated over three million streams in its first day. If those kind of numbers hold strong throughout the week, Dave could challenge for another top spot in the chart once again, like he did with ‘Funky Friday’, which remains the 71st most popular song on Apple Music in the UK. Other entries include ‘Options’ (#15), ‘How It Is’ (#20), ‘Kitchen Kings’ (#28), ‘Baby’ (#37) and ‘Advice’ (#39).