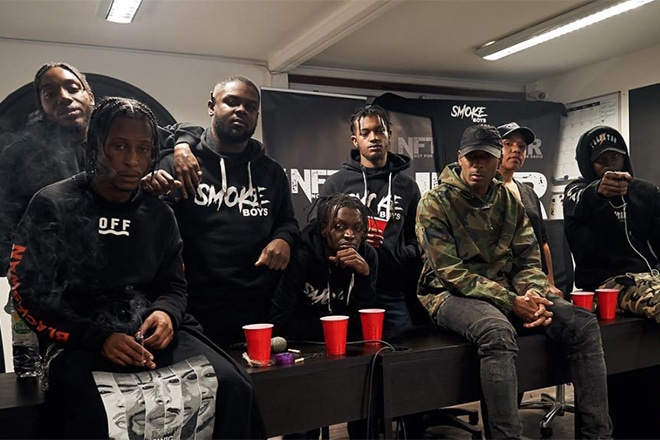 Posted at 01:34h in All Articles, News by Plugsville

The legalities of the group’s name have in-part been responsible for their long hiatus from the music scene. The IPO of ‘Section Boyz’ is owned by someone else, causing an on-going legal battle with someone Sleeks describes as ‘close to home’. They owned the trademark, but decided to pursue a new brand name under new guise.

The group now known as ‘Smoke Boys’ also discussed parting ways with Reeko Squeeze, who was a member of Section Boyz around four years ago but parted ways with the six rappers. They also gave their thoughts on drill music being scapegoated by the media and how a lot of drill rappers sound the same right now, according to Swift.

Speaking on Drake’s iconic surprise appearance at their Village Underground show in 2015, Sleeks explained how they originally messaged Drizzy telling him to pass through. Surprised he replied, the Toronto star ended up passing through to the Shoreditch venue alongside Skepta, and the rest is history.

Don’t Panic 2, the sequel to project from 2015, home to the anthem that was ‘Lock Arf’, is on its way soon. The new album art sports a similar look to the first, but with a sharper, refined edge to it, indicative of Smoke Boys’ new direction.

Watch the full Not For The Radio interview with ‘Smoke Boys’ below: