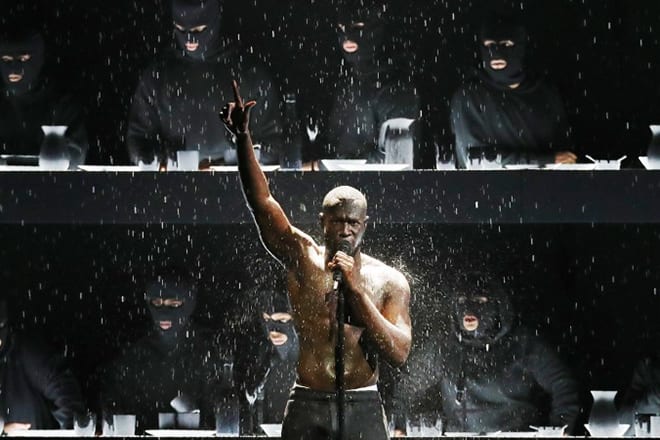 Posted at 01:41h in All Articles, News by Rhianna Patel

Stormzy has proven that he has no problem speaking up for what matters. Since the tragic Grenfell Tower blaze hit in summer 2017, the Gang Signs and Prayer rapper has held nothing back in his pursuit of justice.

From his feature on the Simon Cowell-backed Grenfell charity single through to his chilling live performance to a national audience at the BRITs, he has pioneered for the people.

Focusing on the latter incident, the performance at the BRITs pointed the finger directly at Prime Minister Theresa May, demanding that she is held accountable and also that money needed to be invested into resolving the avoidable-disaster. Without his relentless support for the Grenfell Tower victims it’s hard to say if this matter would have ever made it back to the floor of the Commons.

For a petition to get debated in the Commons it takes 100,000 signatures but this will also depend on how recently the issue may have been debated or if it’s to be scheduled in the near future. As soon as a petition reaches this number of signatures it has to go through the Backbench Business Committee, in order to ensure there is interest from a large number of MPs on a cross-party basis and if there is a clear point of debate.

What we know as a society is that media pressure is everything. When the media is behind an issue or a cause they put extra pressure on the government to make changes or have debates. This is done by their constant discussion of the topic on all their forms of media, whether that be newspaper or social media.

The petitions that receive a lot of media attention, like the Grenfell Tower inquiry, tend to get the signatures required much quicker. But those petitions without media attention may not reach the 100,000. If they reach 10,000 or more then the Petitions committee will request a response to the issue by Government but anything up to 10,000 will only be considered when closed.

Stormzy not only bought a lot of media pressure, as newspapers and online sources were talking about it for some time, but he also got signatures from a group of people who mainstream politics find it hard to connect with.

With an issue like Grenfell Tower, people are also not willing to forget and move on as the aftermath still continues on around us. Petitions like these help society remember why being vocal in politics can help make changes for those who need help the most. And without his persistent support and his following of millions of people a petition like his would have taken a lot longer to reach the debate stage again.

Much like the aftermath of the horrific blaze, which killed at least 70 people and ruined the livelihoods of many more, the victims of the felt the public were filling the gap where they felt the government had lacked. More than 22,000 people signed a petition which called for a diverse inquiry panel to sit alongside the head of public inquiry, but Theresa May rejected this request.

There were fears that the man appointed to investigate Grenfell, Sir Martin Moore-Bick, didn’t have the necessary understanding or experience to deal with the social and cultural factors that preceded the tragedy. In Stormzy, the victims of the horrific fire might not have a panel member that will report back to parliament, but they have someone powerful enough to make parliament to listen to things they would otherwise dismiss.

The fear is that even though Stormzy and many others are rightfully protesting for justice, a solution doesn’t seem to be on the horizon, leaving many without answers for a tragedy which was entirely avoidable.

Fire tests carried out as early as 2014 show that the cladding on the tower block failed to meet the safety standards originally claimed by its manufacturer, according to BBC. An industry source believes there should have been a product recall, yet many lost their loved ones in the blaze and are still without a place to live, and nobody has yet been held accountable.

Without people like Stormzy using their huge platforms to force the issue, the sad reality is that the issue would be further swept under the carpet. Lives were lost and homes were destroyed in an event that prioritised cost-savings above basic safety, yet answers, or at the very least, any form of accountability or suitable investment to repair the lives of those impacted, remain at a premium.