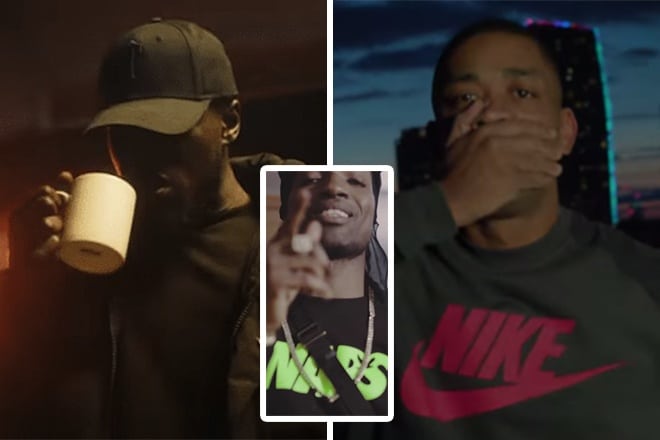 The Stormzy Wiley clash helped to kick off this new decade with a bang. 41 days before the clash began, Dot Rotten sent for Jay1 with a track called ‘4am in the morgue’ on November 25 2019. On January 5 2020, Wiley took aim at Stormzy with a dub called ‘Eediyat Skengman 1’, but how and why are those two events linked?

Jay1 didn’t reply to Dot Rotten’s send, but nearly six weeks later, Stormzy and Wiley (and Cadell) captivated the music industry with a six-part clash that has left some fans wondering how the whole thing even came about and why they were clashing in the first place.

Plugsville breaks down every moment that lead to the Stormzy Wiley clash.

Dot Rotten - 4AM in the Morgue | Prod By @ProducerZeph

At the end of November (25th), Dot Rotten aka Zeph Ellis sent for Jay1 after the Coventry artist allegedly refused to pay Dot his £15,000 fee to use the instrumental for ‘Million Bucks’. There was no reply to ‘4am in the morgue’, a track where Dot also took a shot at Stormzy, but he wasn’t finished there.

The next dub from Dot was ‘Original Real Talk’, which saw him take aim at nine different artists including Wiley, Tinie Tempah, Cashtastic, Aitch, Stormzy, Bugzy Malone and Ghetts. This dub saw Dot name-drop a few fair artists, claiming he made beats for them during their come-up but had now been seemingly forgotten about, while also suggesting his flow had been copied without homage too. At the start of the track, Dot says: ‘if guys want to clash me after this couldn’t care less”, a sign of things to come.

He then leaked Jay1’s new track in full on Instagram live and then dropped an unofficial remix to ‘Million Bucks’, which was taken down by Jay1’s team. The fallout between Dot and Jay1 also lead to Dot and Steel Banglez, two close friends, resulting in Dot challenging Banglez to a producer battle, which never came to fruition.

In a series of tweets on December 19, Dot took aim at Boy Better Know, particularly, Skepta and JME, over a few different things. Here are some of the tweets:

Like @JmeBBK we uses to talk production I still remember the phone number and shit 123432 and shit bro… Like I TOLD YOU ABOUT RAVITY VST AND BLOODWAR SOUNDFONTS AND SHIT! you took my production style and ran but boy better know I'm happy u did something with it

A day after these tweets, Dot Rotten dropped an official send for JME called ‘JME Flow/ 96 Bars of Revenge remix’.

On the same day, Dot also dropped an official send for Steel Banglez behind Eminem’s ‘Cleanin Out My Closet’ instrumental in a track called ‘Sorry Hanji’.

Christmas day is a national holiday but for Dot Rotten, December 25, 2019, was an opportunity to hunt lyrical war, provided he could find someone to send for him. At this point, he’d dropped four different dubs without receiving a single reply. So he sent out the following tweet:

where are the so called greats.. sitting down eating Christmas dinner not defending there bread and butter.. EVERY GRIME MC THAT HAS STOOD ON STAGE AND PERFORMED INFRONT OF OVER 1000 PEOPLE WHO AINT REPLIED OR SAID NOTHING IS A BITCH! SOMEONE ANYONE.. come outside and fight!

Dot also took to Instagram live to ask why nobody had replied to him yet. He also publicly released JME’s phone number, after the MC tried to call him and discuss why he sent for him in ‘JME Flow’. The same day, Dot also dropped his fifth track of the festive season in ’19th God’, dropping bars about being a threat within the grime scene while also taking another shot at JME towards the end of the track:

Wiley says he will send for Dot Rotten’

You lot are shit I will send for @ProducerZeph myself I’m sick of you lot running all the time ?????

This then leads to Dot dropping three dubs in one: ‘You Man’, ‘Cokey’ and ‘Warning Shot’, sending for Boy Better Know and Wiley. Dot then dropped two more dubs specifically aimed at Wiley called ‘Eskimo Dance’ and ‘Bars Up’.

On December 27, two more dubs for Wiley surfaced in the form of ‘Watch A G Shoot’, ‘Top Boy Spitter’, before Dot finally got a reply. To recap, Dot dropped TWELVE dubs before he got a reply from someone he was sending for. Wiley then dropped ‘Curiosity Killed The Cat’ on December 28 in response to the numerous dubs Dot had made for him.

A day later, Dot responded with a track called ‘Curiosity Killed The Wiley Cat’, his 8th dub aimed at Wiley and 13th in the space five weeks.

Dot then released a video showing himself sending a direct message to numerous different MCs including AJ Tracey, Skepta, Kano, Jaykae and Big Narstie, stating that they had made an ‘alliance’ with his ‘enemies’ while telling them ‘only reply if you want the smoke’. On December 30, Dot then dropped his 14th dub in the form of ‘Clownboy Killer’.

One of the artists Dot messaged on Instagram was Jaykae, who dropped a 2-in-1 dub aimed at both Dot Rotten and Wiley. Dot’s call-out explains why he was sent for. Wiley’s inclusion seemingly came because he and Jaykae haven’t seen eye-to-eye for a while and have often taken shots at one another online:

Wiley also has an issue with Ed Sheeran, who dropped a grime remix to ‘Take Me Back To London’ featuring Jaykae and Aitch last August, a move Wiley wasn’t too happy with. He labels Ed Sheeran as a ‘culture vulture’, telling BBC presenter Dotty the following in a phone call last year:

“I’m mad at Ed Sheeran because he said ‘You need me man, I don’t need you’. But Ed, the other day mate, you had to use grime to tip your song over the edge.”

Wiley featured on one of Ed Sheeran’s earliest EP, The No 5 Collaborations EP, which featured grime artists on every track. This project helped grow Sheeran’s fan-base and Wiley claims that when he asked Ed Sheeran to feature on his album, he didn’t want to:

“Listen, we helped that guy get into the picture. I done something for him – ‘You’. It’s on his album, isn’t it? So when I went to do my one I was told, ‘You can’t do this, Ed can’t do the video. You can’t use Ed’, basically. He didn’t want to stand up to his label – he folded.”

Given that Jaykae was one of the grime artists Ed Sheeran apparently ‘used’ to secure a number one single last summer, it’s unlikely that he warmed to Wiley’s constant belittling of the track, which combined with his prior issues with Wiley dating back to Lord of The Mics, lead to him sending for him in ‘Shush’.

Someone asked Wiley if he was going to respond to ‘Shush’ on New Years Day. This is what he replied back:

Less than half and hour after the above tweet, Stormzy and Wiley then engaged in a back-and-forth exchange: 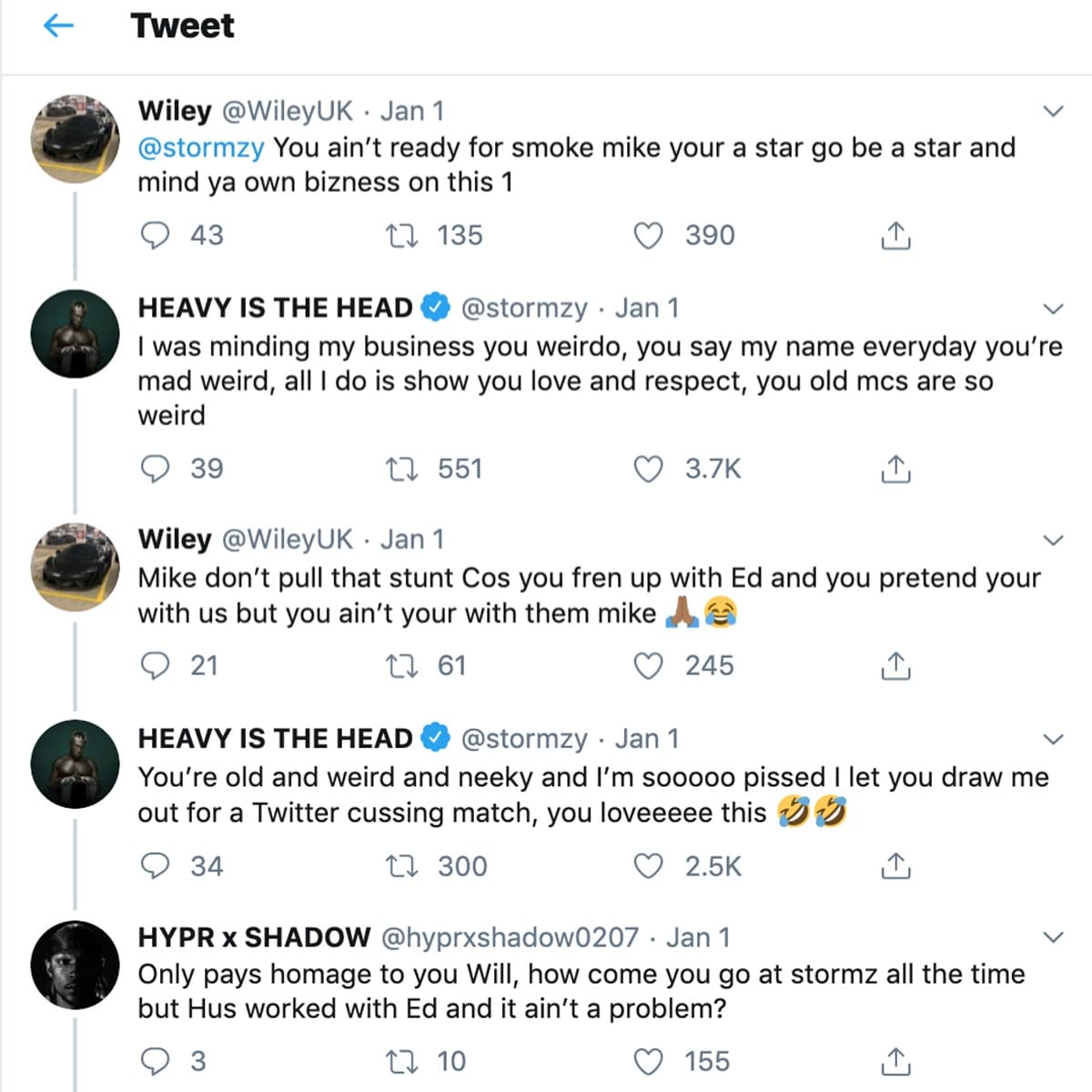 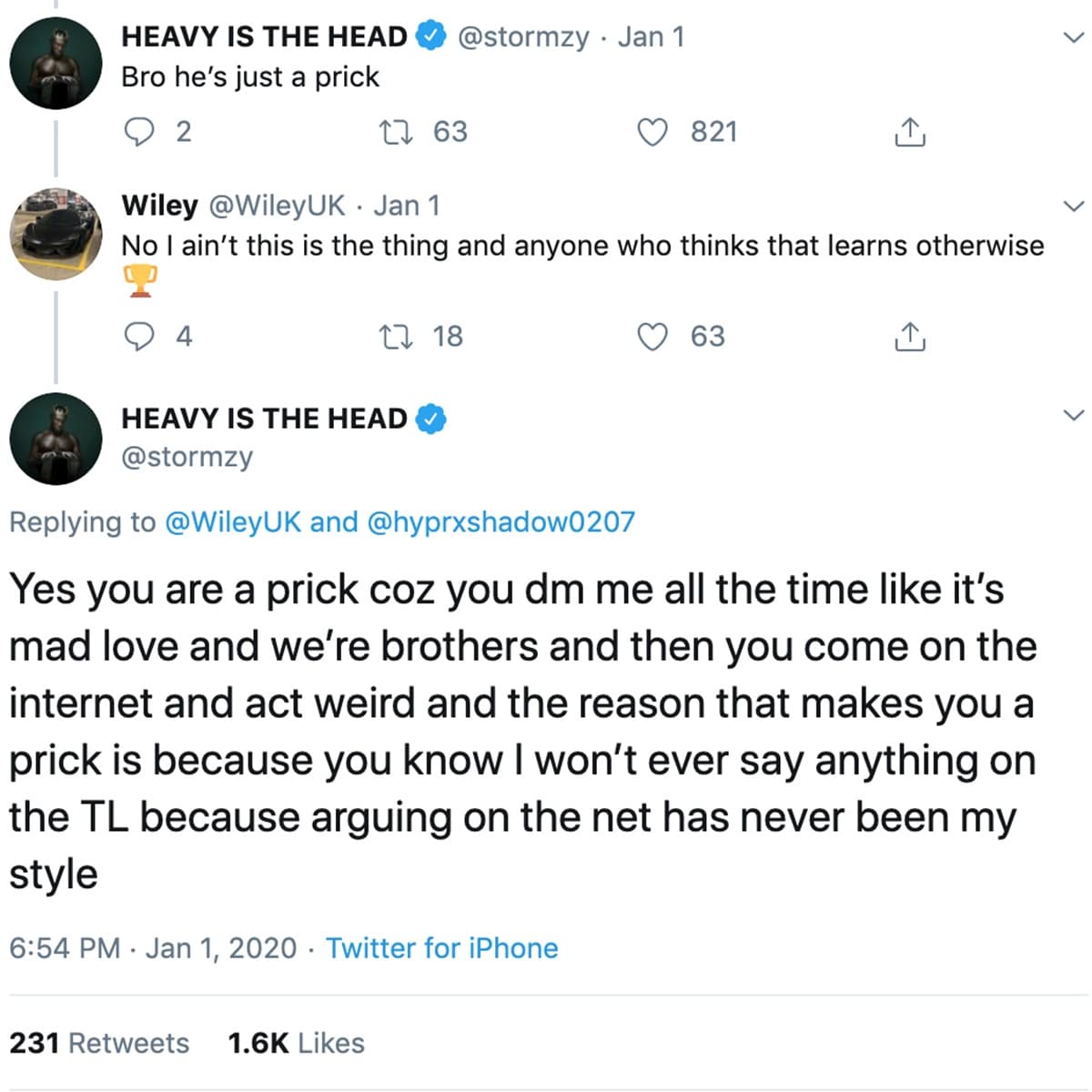 Three days later, Wiley was still at it on Twitter:

@stormzy This is all looking forced and paid for and not natural this is your downfall ????

@stormzy Everything after Ya first album was and still is #Smoke n #Mirrors ???

@stormzy used grime to get famous then fucked off but tried to still hold on lol.Stormzy is worse than @edsheeran but we ain’t hating on Ed #JusSayin ? The most honest tweet I have ever tweeted.

Wiley kicks off the clash with Stormzy with ‘Eediyat Skengman 1’

After teasing the imagery for ‘Eediyat Skengman 1’, Wiley sent out a few more tweets aimed at Stormzy and then dropped the audio for his dub on January 5 on his YouTube channel.

Given that Stormzy was trying to secure the #1 spot simultaneously on both the single and album charts (a feat he would later achieve, with ‘Own It’ and Heavy is the Head topping the singles and albums charts respectively), some thought ‘Eediyat Skengman 1’ wouldn’t be enough to force an official reply from Stormzy. But it was and 24 hours later he dropped ‘Disappointed’ alongside a music video, which racked up over 700,000 views in the space of 12 hours.

Dot Rotten drops his 14th dub in the past five weeks with ‘Oi Stormzy, Sit Back Down’

This dub marks the third time in the space of five weeks that Dot Rotten sent for Stormzy and represents his 15th dub overall. A day later he dropped dub #16 in the form of ‘The War Report 2020’, where he took aim at Stormzy, Wiley, Jaykae, AJ Tracey and Boy Better Know.

Dot Rotten - Oi @Stormzy , Sit Back Down | Prod By @Izamik_Producer

Wiley first dropped an audio version of his second send for Stormzy before dropping a music video for the track a day later. This dub saw Wiley send take a shot at Stormzy’s mum, which became the theme of round two as Stormzy sent back for Wiley’s mum in his reply.

On January 8, Stormzy dropped a second music video and dub for Wiley in the shape of ‘Still Disappointed’ while also taking shots at Wiley’s family and younger brother, Cadell, once again.

‘World War III’ was Cadell’s reply to Stormzy, which arrived on January 9 in the form of a SoundCloud upload. If this track was released a few days earlier and had a music video (side note – music videos are not central to winning clashes, but in today’s social media-centric world, they help magnify the impact of each dub), the track may have reached a wider audience.

‘World War III’ has picked up 60,000 listens via Cadell’s SoundCloud and over 175,000 across YouTube in the form of uploads from random fans, as well as 11,000 views on the music video he released on his own channel two days after dropping the audio. Lyrically, he addressed Stormzy’s claims about apparently disrespecting him a few years prior at an event at Camden Roundhouse. Cadell also sent for Stormzy a few years back, which may or may not have played a part in Stormzy’s decision to make him one of the central themes of his dubs for Wiley.

‘Eediyat Skengman 3’ appears to be the final dub in the Stormzy Wiley clash. Given that both artists were replying within 24 hours of one another, it seems the battle is now dead in the water.

If Dot Rotten didn’t decide to drop a mixtape’s worth of diss tracks, beginning with a send for Jay1, it’s highly unlikely Stormzy and Wiley would’ve ended up clashing.