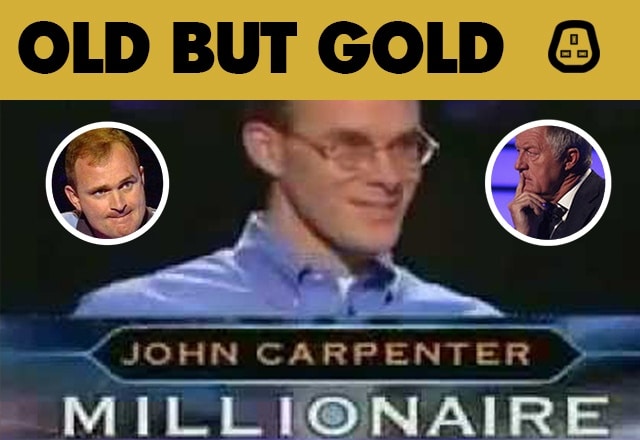 30 May Old But Gold: Two very different ways to win ‘Who Wants to Be a Millionaire?’

Posted at 01:39h in All Articles, News by Ajay Rose

Old But Gold relives past glories, making sure legendary moments are never forgotten.

‘Who Wants to Be a Millionaire?’ has served up its fair share of drama over the years. For British fans, watching Chris Tarrant do battle with random hopefuls seeking to win a huge sum of money made for a decent late night watch.

The show debuted in September 1998 in the UK and has ran for 15 seasons, ending in 2014, with over 100 variations worldwide too. The chance to win £1 million in exchange for answering a bunch of questions was an interesting proposition. Interesting to the neutral, highly unlikely for the person actually competing, which is why only a small group of people ever took home the whole jackpot.

Winning is a rarity on this show. It doesn’t happen often. In this edition of Old But Gold, we revisit two of the most noteworthy victories in the history of ‘Who Wants to Be a Millionaire?’.

‘Who Wants to Be a Millionaire?’ was a mainstay on British television for many years and threw up a scandal or two as well, like army general Charles Ingram, who was stripped of his one million pound prize-money after using two accomplices to cough nearly 200 times to ensure victory.

Ingram’s wife, Diana, had previously appeared after making over 300 calls to the show, but fell at the £32,000 hurdle, as did her brother, Tecwen Whittok, the second accomplice who was also a contestant who stumbled at the 10th question. But when Charles had a crack on September 9 2001, he didn’t have that problem.

On the first night of his two nights on the show, he needed to two lifelines to win £4000, the first benchmark which ensures you don’t leave with £0. Ingram wasn’t exactly painting the picture of natural genius in the early rounds, which means his chances of winning seemed even more unlikely. Come night two, Charles Ingram was suddenly far more clued up, courtesy of his Whittok and his wife, Diana.

You are given four choices for each question, A, B, C or D. What Charles did was read out each option, and when he read out the correct answer, an accomplice would cough lightly. If the correct answer was D, Whittok would remain silent while Charles read out options A-C, and cough slightly on D, and so on.

When Charles was about to commit to a wrong answer, they blew their nose or coughed loudly, as if to make an immediate disruption in order to simplify the answers. The plan worked and Ingram thought he’d joined ITV’s Mount Rushmore after miraculously overcoming the odds.

A few days after the episode aired, Charles Ingram got a call from the bosses at ITV, who said there were ‘irregularities’ during filming and the show would be aired. There were 192 coughs spotted throughout the program, which also lead to a police investigation. The two Ingram’s and Whittok were each given suspended prison sentences but avoided jail and have since claimed their innocence.

At a screening of ‘Quiz’ last month, a theatre production which details Charles Ingram’s story by giving the audience keypads to vote on whether or not they think he’s innocent, Ingram said: “Make your own mind up about truth, and no, guessing is not good enough.”

Responding to the production, Chris Tarrant maintained that the ‘Coughing Major’ is most definitely guilty: “Such as, never in the history of the quiz I hosted in Britain for 15 years, has anyone scooped the top prize when they clearly had no sure idea of most of the answers.”

Enjoy this mini-documentary below which provides a tidy summary of how everything went down:

John Carpenter. Once just an IRS agent, now a cult figure in ‘Who Wants to Be a Millionaire?’ folklore.

Before him, only one other contestant had ever won $500,000 on the US version of the show, but then Carpenter comes along and not only wins the $1,000,000 prize, becoming the first to do so, but provided a viral mainstay before going viral was even a thing.

When host Regis Philbin asked “Which of these U.S Presidents appeared on the television series ‘Laugh-In’?”, John decided to use his phone a friend lifeline to ring his parents.

His dad answered. Instead of being lumbered with being asked to help John answer a question in unchartered, million dollar territory, he didn’t even bother relaying the question.

Instead, John Carpenter said: ‘Hi dad, I don’t really need your help, I just wanted to let you know that I’m gonna win the million dollars”, before saying that Richard Nixon was his final answer.

Put bluntly, he took the absolute piss. Nobody had got to the final question on the US edition before he did, and Carpenter did so with all three lifeline intact. He could’ve easily ended the show as the first contestant to win the million and not have to solicit any help. That in itself would’ve been a huge achievement.

But he took it a step further, and provided arguably the greatest use of phone a friend in the show’s history. Although, whilst the glamour of taking home six figures certainly has its merits, Carpenter talked honestly about how far the money itself can take you: “After the taxes, it’s not change-your-life if you want to eat every day”

Compared to Charles Ingram, the man who needed close to 200 coughs to muster up 15 correct answers, John breezed through them like say he traded the answer sheet for two Kit-Kats with someone in the year above in the school playground.

‘Who Wants to Be a Millionaire?’ in truth was never a must-watch. If I had the option to put it on series record like I do now, I probably wouldn’t have taken it all those years ago. That said, it had its moments, none finer than the man who 192 coughs was enough to fool everyone without detection, and the gameshow icon who made a mockery of last-minute nerves.